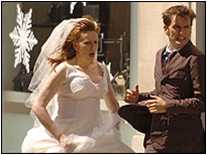 Since the 2005 return of UK telefantasy series Doctor Who, a gender discourse has circulated around the franchise articulating a number of established postfeminist tropes, while effecting a continuation of the dominant gender dynamic and hierarchised relationship between the Doctor and his predominantly female companions present across the classic series (1963-1989). Its revivification in a postfeminist context, and renewed recourse to the female companion as the principal means of representing femininity was always going to be noteworthy from a feminist critical standpoint. A particularly striking way in which femininity is depicted in manifestly postfeminist terms is via the entrenched, diegetically integrated, visually arresting trope of the runaway bride, commensurate with the new series’ marked thematic turn towards romantic relationships and sexual tensions.1

The runaway bride is an iconic popular cultural motif, articulating fluctuating gender norms, shifting social roles and unstable patriarchal institutions, and rose to discursive prominence in classical era Hollywood screwball comedy. Commentators have correspondingly framed the dynamic between latter day Doctors and companions in terms of its comparability to that of the screwball couple,2 and have done so irrespective of the heavy use of the generically apposite runaway bride trope, particularly central to the characterisation of current companion Amy Pond.

As Diane Negra highlights elsewhere on Flow, scholarship on screwball has read her symbolic significance progressively in terms of (albeit contained and negotiated) liberation and empowerment. The runaway bride has retained representational currency over time, figuring as rhetorical shorthand for the aforementioned concerns over decades, while her signification adapts to changing socio-cultural milieus, including the advent of postfeminism, the “hypermatrimoniality”3 of which exacerbates her representational viability. The contemporary runaway bride is thus “very much in keeping with a postfeminist media culture that tends to recycle classical representational codes but strip them of their progressive and/or ambivalent features.”4 Bearing in mind this conceptualisation, I turn to the recurrent use of this trope to signify femininity in the ‘Whoniverse,’ where the runaway bride has been repeatedly and multivalently deployed to a plurality of discursive functions.

In terms of formal characteristics and diegetic scenarios germane to cult TV, Sara Gwenllian Jones highlights that “as social practice, heterosexuality is antithetical to the exoticism and adventure that characterize the fictional worlds of cult television series,”5 while Matt Hills notes former show-runner Russell T. Davies’ authorial concern with queerness as a foil to the likelihood of heterosexual coupling taking place.6 Nevertheless, and in contradistinction to the classic series, romance and the suggestion of sexual relationships between the Doctor and his female companions has coloured the new series from the outset.

The recurrence of runaway bride scenarios brings this romance thematic into focus, while the Doctor’s serial disruptions of his companions’ weddings gestures towards the impracticability of coupling narratives. So far, the nuptials of Donna Noble, Sarah Jane Smith, and Amy Pond have all been correspondingly thwarted by the Doctor’s direct or indirect intervention, while Gwen Cooper’s was delayed by Jack Harkness in spin-off Torchwood. Each woman embodies a different mode of (white middle-class) postfeminist femininity, which is filtered through a runaway bride scenario tailored to correspond with individually ascribed and embodied postfeminist tropes and themes. 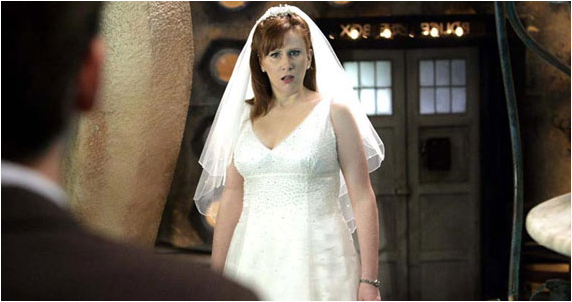 ‘The Runaway Bride’ introduces Donna according to the familiar representational template of the ‘bridezilla.’ A public sphere underachiever (a middle-aged temp living at home) she is desperate to marry and publicly display what she perceives as her private sphere success through her evident thrall to what Otnes & Pleck call “the allure of the lavish wedding.”7 In this way, her runaway bride signifies inversely from the standard, in that Donna is running towards her wedding, not away, having spontaneously dematerialised midway down the aisle, to find herself with the Doctor. A subsequent season witnesses her process of enlightenment and epiphany as she transcends her hitherto limited life choices, is empowered after being imbued with Time Lord intellect, and becomes “the most important person in the whole of creation.” However, her story ends (albeit ambivalently) in retreat, reverting to a postfeminist script when her closure sees her memory erased in a typical “unlearning”8 of insights gleaned as, with her life at stake, she is subjected to an enforced downshift and we leave her much as we found her at the outset of ‘The Runaway Bride,’ at her wedding, which this time plays out to completion. 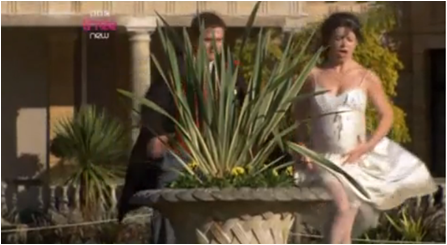 Gwen’s most visibly ongoing articulation of postfeminism is via her action heroine persona, which is significantly complemented by her manifestations of work/life balance anxieties that come to the discursive fore though a runaway bride scenario in ‘Something Borrowed,’ which directly confronts the tensions between her professional life as an alien-fighting Torchwood operative, and her desire for “stability” via marriage. 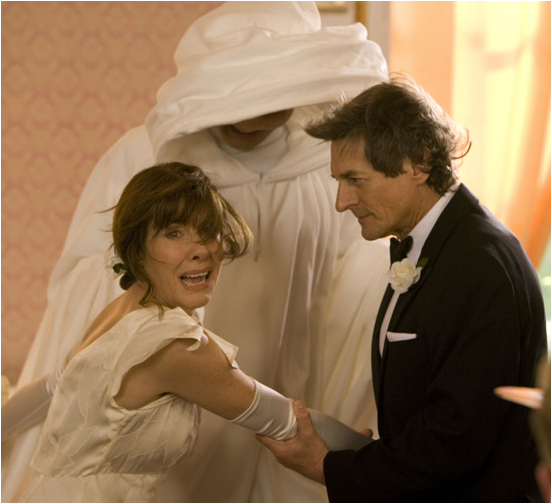 In spin-off The Sarah Jane Adventures, the eponymous protagonist is posited as an ageing female subject and late-in-the-day single mother manifesting anxiety about her consignment to a future of abject singlehood, which is brought to bear via her romance with Peter Dalton, culminating in a hastily arranged wedding, and invoking what Negra calls the “spectre of female singlehood as it is staged in relation to a sense of time urgency.”9 As Sarah states of her expedited wedding: “At my age, why wait?” During the ceremony the Doctor bursts in to stop the proceedings, which have been engineered by recurring villain the Trickster, who traps Sarah in a recurring second as long as she refuses to say “I do.” Discovering Peter’s collusion with the Trickster, Sarah removes her ring, flings it away and runs. Her perpetual singlehood is presented as a necessary but regrettable sacrifice she must make for the sake of the world’s safety, in an apparent concession to the impossibility of “having-it-all” as an ageing female subject in postfeminism. 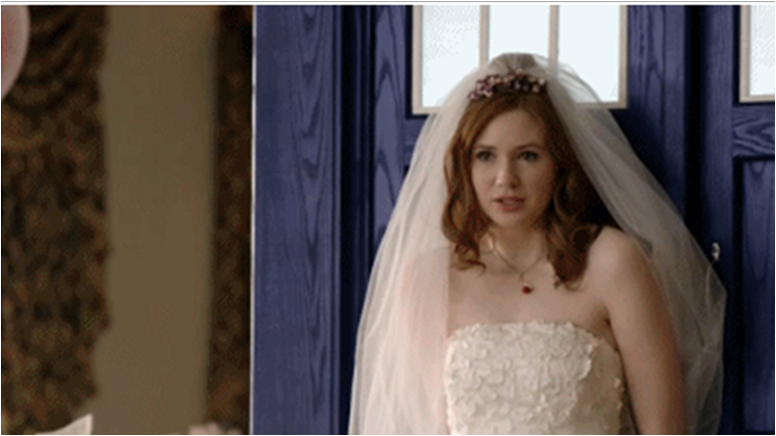 Amy’s runaway bride status has been a structuring thematic anchoring her characterisation throughout her inaugural season, and she is the most literal embodiment of the trope to date, choosing to join the Doctor and flee her impending marriage, leaving her unworn wedding dress behind her. She later manifests retreatist tendencies through an ambivalent urge to downshift, flip-flopping between excitement and adventure with the Doctor, versus domesticity and village life with fiancé Rory, as her narrative unfolds in terms of the disingenuous choice rhetoric germane to postfeminism. It is frankly addressed as such in the episode ‘Amy’s Choice,’ which confronts her with the life she is likely to have if she marries Rory via a five-year flashforward, imagining it as non-eventful and dull, bringing further into focus that settled heteronormativity is what Amy ran from the night before her wedding. Although the pair do finally marry, they also re-embrace the liminality of life with the Doctor, becoming a runaway couple (“it can be the night before [or of] our wedding for as long as we want”), so the necessity of Amy having to address her ambivalence, continually alluded to over the course of the series, can be potentially endlessly deferred.

This multiplicity of runaway brides, while complicit with broader postfeminist discourse up to a point, nevertheless articulates a degree of ambivalence with regard to her symbolic significance, placing as it does, large question marks beside the possibility of Donna, Gwen, Sarah or Amy ““living happily ever after” in a time outside of time.”10