The Hotness of Cold Opens: Breaking Bad and the Serial Narrative as Puzzle
Lisa Coulthard / University of British Columbia 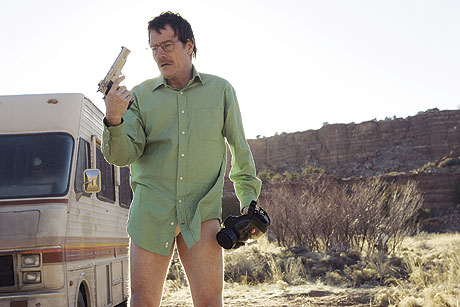 With black humour and precise attention to character development, AMC’s Emmy winning series Breaking Bad has garnered critical praise during its three seasons to date. A serial narrative focused on a chemistry teacher Walter White (Bryan Cranston) who starts manufacturing crystal methamphetamine as a way to subsidize his cancer treatment and ensure his family’s continuing financial security after his death, Breaking Bad offers a smart and frequently funny take on a “the ordinary guy turned gangster” narrative. Sure of his imminent death, White in the first two seasons embarks on a life of crime that does not change him so much as enables him to express the person he has always been. After the remission of his cancer, it becomes clear that there is more to his criminal ways than financial security as Walter White the meth cook finds confidence, satisfaction in his work and career success in ways that Mr. White the high school teacher never did.

Like many of the most highly praised series on television today, Breaking Bad expands this narrative premise into a long form serial narrative that builds upon events in a cumulative rather than episodic fashion. More than merely parsing out the story across a number of episodes, these contemporary examples of televisual seriality use the long form narrative to build mystery and intrigue in ways that have the audience searching for clues, hints or hidden meanings. In film studies, this tendency has been described in terms of narrative puzzles or games that function as complex nodes for viewer engagement. For instance, focusing on the mind game film as a variant of the puzzle film, Thomas Elsaesser argues that films such as Memento, Lost Highway, Fight Club and The Others operate as brainteasers that take delight in misleading spectators and involve them in fan-based cult-style reception. Noting that the puzzle structure of these films invites multiple viewings as well as a spectatorial attention to detail and minutiae, Elsaesser comments on the invested and frequently obsessive fan interaction with such films. Through fan forums, marketing and the creation of para-textual as well as textual games (for instance, games that arise from a film but also games within a film as in Lars von Trier’s clue based contest for The Boss of It All), these puzzle films take on a life beyond the diegesis itself. As Elsaesser terms it, a puzzle or mind game film is more than just a film, it is “a node that sustains and distributes a particular form of (floating) discourse.”1

While Elsaesser focuses on filmic examples, his argument is illustrated even more clearly in recent televisual innovations in long form serial narratives. Jason Mittell refers to television series such as The Wire as examples of a new “complex narrative,” a phrase in which “complex” is not a descriptive or evaluative adjective but rather a designation of a new form. This kind of complex seriality is easily connected to the kind of puzzle films that Elsaesser discusses, a tendency that encourages the kind of attention to detail and investment in story that are required in order to keep audiences over several episodes of what is in some way a single narrative. This form of seriality has been likened to the installment novel and even to poetry; comparisons that suggest the complexity and intensity of both narration and viewer engagement. As Elsaesser’s analysis suggests, the filmic or televisual puzzle is “part-text, part-archive, part-point of departure, part-node in a rhizomactic, expandable network of inter-tribal communication.”2

Turning back to the example with which I began, we can see how Breaking Bad provides a clear illustration of this kind of puzzle narrative in a televisual serial form. With active fan communities and even more active niche marketing by AMC, Breaking Bad manipulates the puzzle format in unique ways, the most intriguing of which is the variation on that television narrative standard—the cold open. Popular throughout the 1950s and 60s, the cold open is most succinctly defined as a pre-credit teaser that is not necessarily or directly tied to the action of the episode itself, but is rather an attraction on its own terms aimed at catching an audience quickly and convincing them to stay.

From the playfulness of the Los Cuates De Sinaloa music video for 2.7 “Negro y Azul” to the Lynchean 3.1 “No Mas” to the cryptic pilot episode, Breaking Bad’s cold opens have stood out: often surreal, tangential, temporally distanced and confusing, these opens are set pieces, unhinged or fractured from the narrative flow and style of the episode. The pilot episode, for instance, started with a shot of pants flying off a recreational vehicle as it sped down a dirt road and the ensuing distress of a middle aged bald man, who we will only later determine is the chemistry teacher turned meth manufacturer Walter White. Grabbing the audience through intrigue, this open displaced the temporal flow of the action by showing us the end of the episode first and then moved us backwards in time to reveal the cause and effect chain that resulted in this scene.

The puzzle nature of these cold opens is most obvious in the show’s second season, in which the cold opens for 2.1 “Seven Thirty-Seven”, 2.4 “Down”, 2.10 “Over” and 2.13 “ABQ” work together to provide clues for the climactic event in the final episode of the season: as the titles spell out, the culminating action of the season is the collision of two planes over Albuquerque. To parallel this titular puzzle, the cold open for each episode reveals a segment of mysterious action that turns out to be the clean-up of this horrific accident. What makes these opens a puzzle or mind-game rather than mere foreshadowing is that these clues are only detectable after the season has ended: they are retroactive clues, rather than hints to help us in a gradual unfolding of a mystery. That is, as the fan and marketing discourses created around the show make clear, these hints work in the nodal, paratextually motivating ways Elsaesser suggests and indicate the ways in which a variation on an old formal device works to further the innovations associated with the puzzle tendencies of complex narratives in televisual seriality.