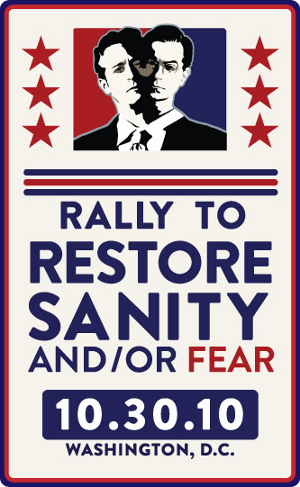 As I have with award shows, conferences, and, yes, in-class screenings of Body Heat (Lawrence Kasden, 1981), I intended to live-tweet the Rally to Restore Sanity and/or Fear, held October 30, 2010, on the Mall in Washington D.C. But that plan was shot to hell around 9:00 AM on the day of the event, when I—and thousands of other unlucky AT&T customers—realized we would have no phone or Internet service for the next seven hours. This technological breakdown1 apparently frustrated many families and friends who were trying to schedule meeting times and locales amid the swelling crowd of 215,000.2 But for me, the tower overload meant that I couldn’t report on or post pictures of the activities as I’d promised, nor could I engage with those on the rally backchannel like Brian Stelter, whose live-tweeting echoed what I’d been thinking since I boarded the plane in Detroit eighteen hours earlier: namely, that the Rally to Restore Sanity and/or Fear was not necessarily “a Woodstock for the Millennial generation” as some had touted, but an event aimed heavily at Generation X and Baby Boomers, or those fans who are singlehandedly raising the median viewing age of The Daily Show and The Colbert Report.3 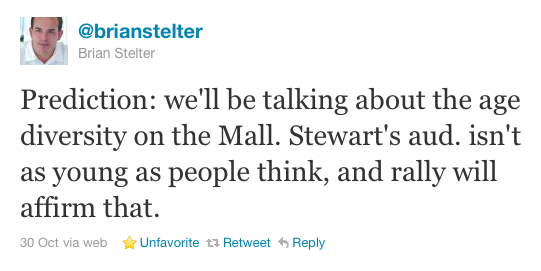 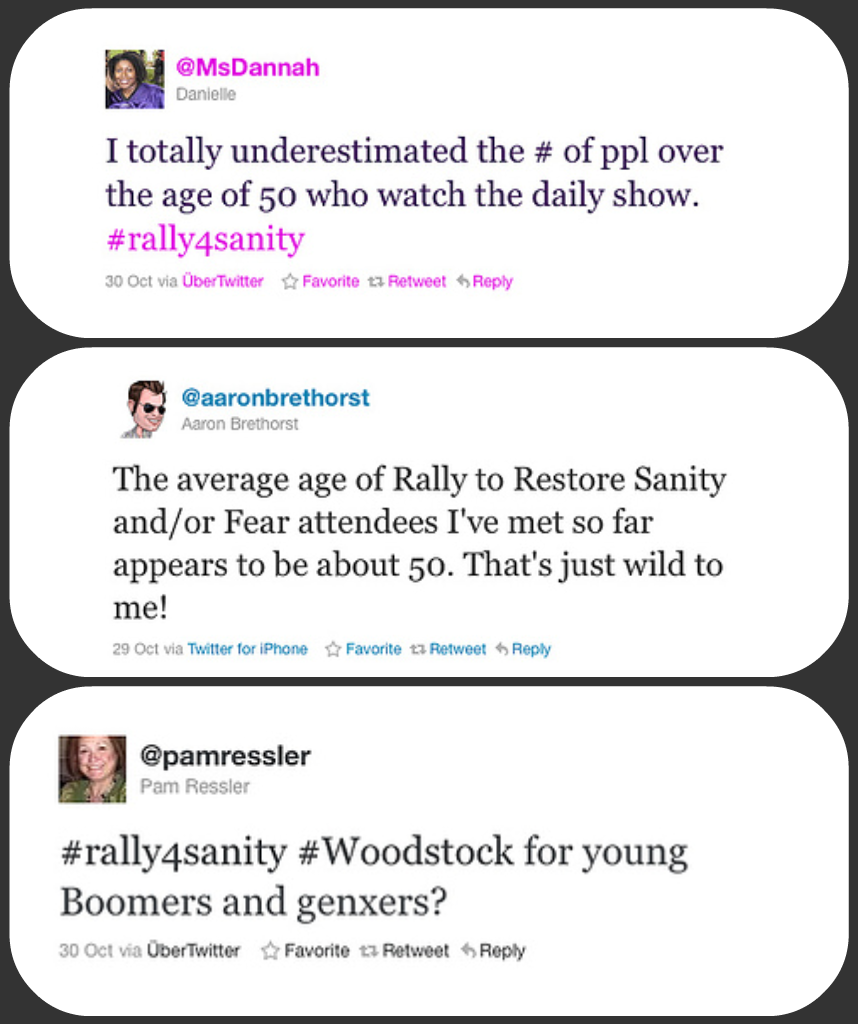 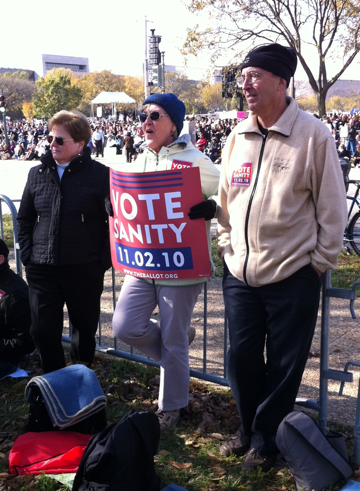 Specifically, the roster for the Rally to Restore Sanity and/or Fear (which was not released to the public beforehand) featured the following personalities/performers: The Roots, John Legend, Star Wars‘s R2-D2, Jeff Tweedy, Kid Rock, and Sheryl Crow — young(ish), hip, pop-culture icons with whom most Millennials are likely familiar.4 But also featured onstage that brisk fall afternoon (and arguably the most memorable) were Yusef Islam (formerly Cat Stevens), The O’Jays, Ozzy Osbourne, Father Guido Sarducci, Law & Order‘s Sam Waterson, Mythbusters‘s Adam Savage and Jamie Hyneman, Mavis Staples, Kareem Abdul-Jabbar, and Tony Bennett—names/artists more recognizable to Generation X and Baby Boomers than the supposed regular viewers of The Daily Show and The Colbert Report. In fact, with the exception of The Prince of Darkness and Kareem Abdul-Jabbar, few of my students (I have about 200) could recognize the latter names (see poll below).5 Moreover, one student tweeted that even after he looked up some of the people, he still didn’t know who they were. In the same vein, a NY Times writer had to counsel his readers on Don Novello’s Saturday Night Live character who provided the rally’s “benediction”: “If you’re not familiar with the comedy of Father Guido, ask your parents. If they’re not familiar, have them ask your grandparents.” No, young person, just turn to the 40- or 50-year-old standing right next to you. 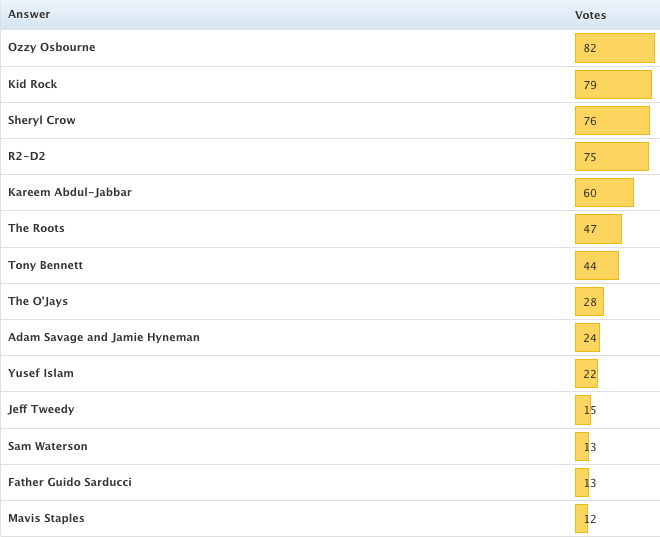 As I’ve suggested above, audiences of The Daily Show and The Colbert Report are typically portrayed as liberal, lazy, pot-smoking college students — “stoned slackers,” Bill O’Reilly likes to say. Or as Rush Limbaugh put it a couple of days before the rally, they’re kids who are willing “to sit around, get drunk, smoke some doobies, and listen to putrid jokes told by a couple of half-baked comedians.”6 Furthermore, even when Stewart’s and Colbert’s viewers are represented positively in the media—for example, as being more in tune to election issues than non-TV-watchers and more “confident in their ability to understand the complicated world of politics“—the age-range covered is virtually always 18-25. 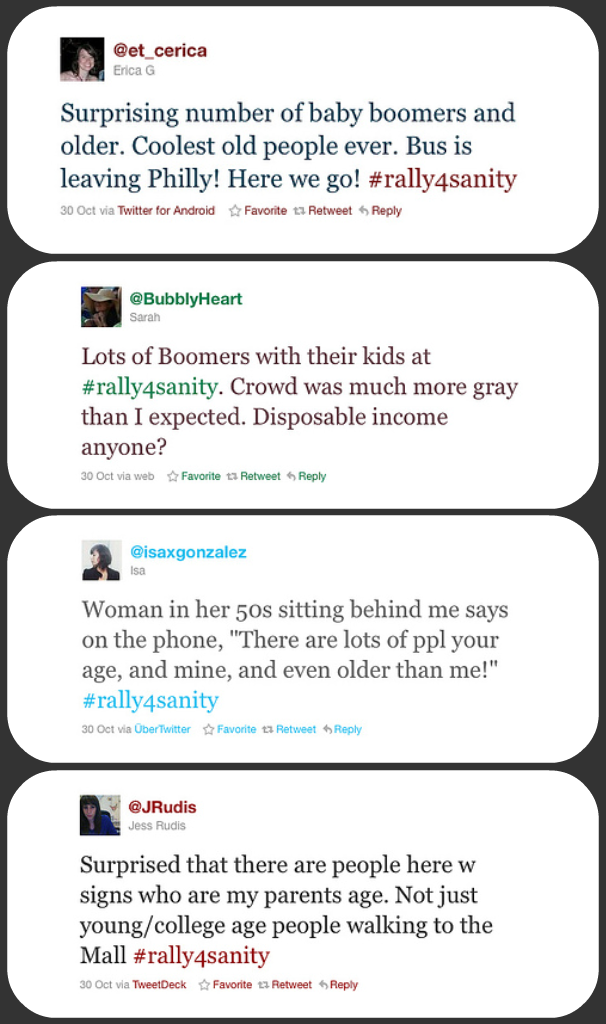 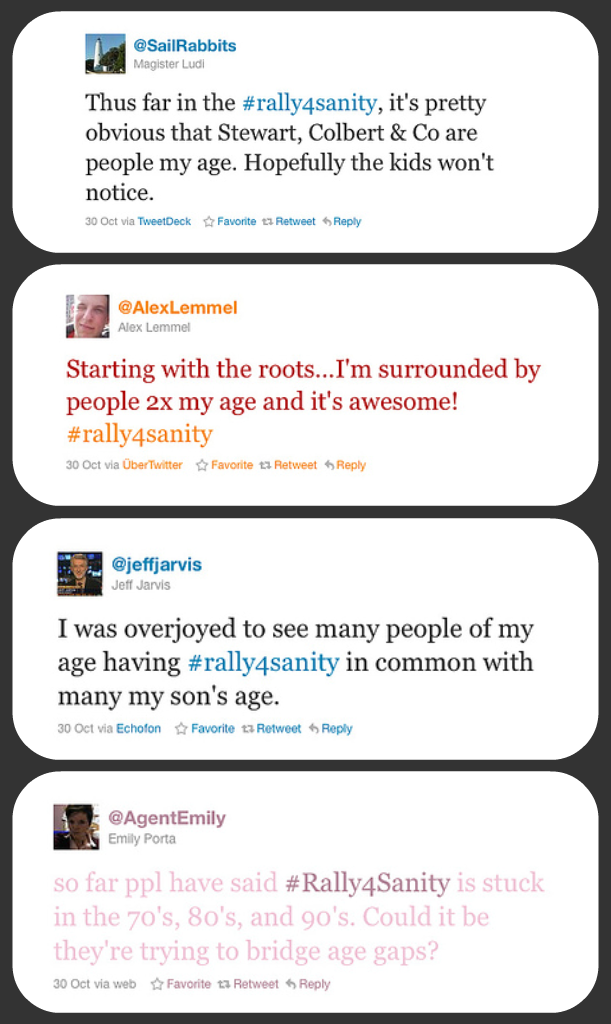