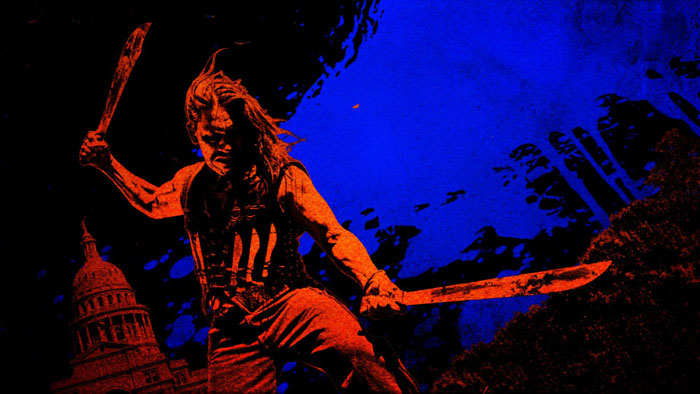 Robert Rodriguez and Ethan Maniquis’ recently released mexploitation film, Machete, unrolled slowly this year, along the way garnering salutes and slurs even before critics sat down for advanced screenings.   The attention Machete received makes sense given the political context of 2010: after nearly ten years of celebrating Latinos as a marketable demographic and new political constituency in general market media discourses, the ongoing debates about Latino immigration characterized by mass marches in 2006 and 2007 moved indubitably into the realm of moral panic with the passage of Arizona’s immigration enforcement law, S.B. 1070.  Machete agitates and provokes the issue, as the title character played by Danny Trejo becomes embroiled in a fight between the pro-immigrant “Network” and the anti-immigrant forces led by a Texas state senator.  Machete ultimately leads an army of immigrant workers in a bloody revolt against a Minutemen-style white-supremacist border militia.  Certainly, the paratextual dialogue between the film and the political context of 2010 serves as a necessary starting point for understanding the Machete. But the temporal dimensions of Machete’s production also exemplify the cyclical nature of regimes of representation.1

Fans of Rodriquez may have followed the Machete character since his appearance in 1995’s Desperado.  More recently Trejo played the character in a short film that ran as a spoof trailer in the Rodriguez-Eli Roth collaboration Grindhouse (2007).  Draped in 1970s style post-processing effects, the short outlines the plot for the feature film released 3 years later: Machete is an ex-Federale and now day-laborer, set-up as the failed assassin of Senator McLaughlin (Robert DeNiro).  Out for revenge, he enlists the help of his brother, a Priest named Padre (Cheech Marin), and Machete warns the antagonists “you fucked with the wrong Mexican.”  Michelle Rodriguez depicts Shé, the leader of an underground railroad for undocumented workers, and plays opposite Jessica Alba’s Sartana, a border patrol agent who eventually embraces the struggle of immigrants, declaring, “we didn’t cross the border, the border crossed us!” 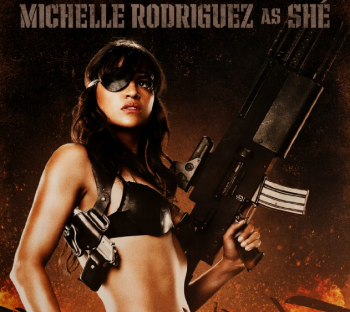 The film intervenes directly in the ongoing immigration debates, now intensified by the passage of Arizona’s law.  Some of Senator McLaughlin’s lines could be taken directly from the speeches of Tea Party candidates for the upcoming mid-term elections.  On two occasions Machete takes viewers through scenes of Latino labor in kitchens and hotels while McLaughlin’s hard-line campaign speeches serve as voice-over.  At other times Shé makes nuanced arguments about the contradictions of U.S. border policy to a law-and-order Sartana.  But the film does not rely much on subtlety. The satirical qualities of Machete are so outlandish that even critics discount them.  In the New York Times, Stephen Holden writes:

For all its political button pushing, “Machete” is too preposterous to qualify as satire. The only viewers it is likely to upset are the same kind of people who once claimed that the purple Tinky Winky in “Teletubbies” promoted a gay agenda. A pop culture conspiracy is usually in the paranoid eye of the beholder.2

At the same time, even before the film was released, Machete provoked frantic activity on the right and has since elicited protests by conservative groups at theaters screening the “race war” film.   The ridiculousness of Machete fits in rather well with the far-fetched claims of reverse racism toward whites that characterize the current discourse of difference on the right, especially since President Obama’s election.

Earlier this year, Rodriguez’s provocation (and marketing prowess) soared to new heights as he released a version of the feature film trailer as a “special Cinco de Mayo message to Arizona.”  The direct confrontation to supporters of Arizona’s law by a knife-wielding Trejo was enough to agitate the far right.  That Twentieth Century Fox, sharing the same parent company of Fox News, distributed the film may be too much for opponents of Rodriguez to bear.  The Texas Film Commission may withdraw tax incentives if it finds the film to represent Texas negatively or has inappropriate content.  Interestingly, Texas Gov. Perry signed the tax incentive law for filmmakers at Rodriguez’s studio, remarking, “We love you and all the gals and guys that work with you and all you’re doing out here.”3 Time will tell if such sentiments last.

These paratextual elements certainly shape not only how the film intervenes in events at the time of release, but also how the audience approaches the film. I would also argue that elements of the production history, as they show up in reviews and fan sites, speak to the nature of regimes of representation.  Many web reviews of the film remark how the Machete character and an early script for the feature film were originally thought up in 1992 during the production of Rodriguez’ breakthrough indie El Mariachi.  The early 1990s was the last time a broad-based moral panic about Latino immigration occurred.  At that time, the discourse of the Brown Peril was stoked by a California law, Proposition 187, and the culture wars on the right that are not unlike fury unfolding today. The early 1990s were also a time of recession, when white workers left out of the economy targeted their malaise at Japanese cars and immigrant workers.  The similarities between now and then, and the consistency of blame, stereotypes, and fear directed at Latinos demonstrate that dominant regimes of representation are not replaced by periods of change.  They hibernate in cultural assumptions; ready to be re-activated when the conditions are right.

The Machete character links these two time periods.  Violent, righteous, sexualized, and indestructible, Machete embodies the worst fears contained within the discourse of the Brown Peril.  Following the character’s development, our critical attention should turn not only to the political mise en scéne of the film, but also to the temporal logic of difference.  Regimes rise and fall, but some remain in tact.