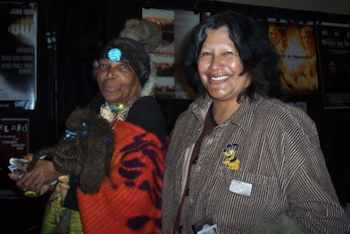 On May 31, 2010, my dear colleague and friend, Māori filmmaker and matriarch Merata Mita, died unexpectedly in her native Aotearoa (New Zealand). By Merata’s own account, her emergence as a filmmaker was, in a way, accidental. She started her professional life as a teacher who found that film, video and television could empower people who lacked “other communication skills.”1 However, it was in May 1978 when Merata felt that she had become a filmmaker. Merata went to Bastion Point to support Ngāti Whātua people protesting the New Zealand government’s decision to develop tribal land. When the police and soldiers began to forcefully remove the men, women and children who had been living at Bastion Point for five hundred and six days, Merata picked-up her camera and kept it running. Over the following two years, the footage became the documentary, Bastion Point: Day 507 (1980), and a text central to the history of Māori land rights. Merata felt that she had become a filmmaker because Bastion Point: Day 507 became an act of empowerment for many of the people in the film and wider community.

Over the following decades, Merata led a pioneering and impassioned life that used narrative and documentary film, video and television as the means of expression for indigenous peoples, women and social change in Aotearoa, Oceania, Hawai‘i and North America. She directed, produced, wrote, crewed, and assisted or acted in a countless number of works for film and television. Merata’s first feature film, Mauri (1988), made her the first indigenous woman to direct a feature film and the first woman to direct a feature film in New Zealand. Near the end of her life, Merata joined seminal initiatives dedicated to seeding the indigenous experience in the world of cinema such as the National Geographic All Roads Film Project, the Sundance Institute Native American and Indigenous Program, Pacific Islanders in Communication and my institution, the University of Hawaii’s Academy for Creative Media. As Geraldine Peters notes in her study of Merata, Merata’s filmography reveals an agenda formed around indigenous imperatives of “history, land, labor (both creative and industrial), language, resistance, and the genealogy of women.”2 For Peters, Merata’s life and work can be described by Merata’s interpretation of whakapapa (genealogy), “the name of a person, the associations of that name over her history, the area she worked in, the area she walked in, the battles she fought.”3 Indeed, Merata’s film and television work reflects her experience as a Māori and as someone who understood the power and multidimensional roles of being a woman.

Before Merata’s untimely death, she was invited to contribute to the annual speaker series hosted by the University of Hawai‘i/East-West Center International Cultural Studies Graduate Certificate Program. She suggested that a good topic for the series would be “The Idea of a Pacific Cinema.” Sadly, no one will know what Merata would have wanted to say about the subject matter, but it is clear that she played a role in connecting Pacific cinema with social change. Hamid Naficy’s work on the “accented” cinema of exilic and diasporic filmmakers comes to mind.

For Naficy, the “accent” of exile and diaspora describes the life experiences, stories, aesthetics and modes of production that work within and against the dominant film trajectory in the West. The “accent” is “the displacement of the filmmakers and their artisanal production modes…Accented filmmakers are not just textual structures or fictions within their films; they are also empirical subjects, situated in the interstices of cultures and film practices, who exist outside and prior to their films.”4 The accents of exilic and diasporic film come from the experience and exploration of being a deterritorialized people. Merata did not live in exile nor was she a purely diasporic filmmaker, but as a self-identified Māori and indigenous woman, Merata’s whakapapa of an imperfect ancestral land resonates with the deterritorialized threads of displacement, artisanal production and interstitial existence that runs throughout filmmakers in exile and diaspora. Put differently, the Māori and indigenous experience adds an accent to cinema.


A key point of accented cinema is that the dislocation and politics characteristic of exilic and diasporic filmmakers is reflected in their alternative mode of cultural production. This is a filmic inflection characteristic of Merata’s life and work. Accented media production is interstitial, collective, multifunctional and integrated. Accented filmmakers inhabit the “in-between” spaces of media industries and host or settler societies and can “operate both within and stride the cracks and fissures of the system, benefiting from its contradictions, anomalies, and heterogeneity.”5 Accented filmmakers work collaboratively and collectively. They consider “filmmaking to be a type of ‘collective enunciation’ in which filmmakers and audiences are conjoined by their membership in communities of address that consist of émigrés, exiles, ethnicized, and otherwise otherized subjects.”6 Accented filmmakers “are involved in all aspects of their films horizontally, often serving as producer, director, screenplay writer, editor, and sometimes as on-camera talent and cinematographer…[and] they are involved in all phases in their films vertically, from preproduction financing to exhibition.”7

Merata displayed great agility in her professional life. She straddled multiple professions, media industries, communities and mediums. She was a teacher, actor, cinematographer, editor, film festival programmer, producer, sound engineer, writer as well as a television researcher, producer and reporter. She made documentaries, music videos, feature and short films that were shot on video, digital video, 16mm and 35mm film for movie theaters and television screens. Merata worked in different areas of the media industry, from commercial cinema to independent and public media, and throughout her career, Merata embraced indigenous and non-indigenous peoples as filmmakers, crew and talent and worked on indigenous and non-indigenous projects with equal dedication. Over the past decade, Merata encouraged pan-indigenous film mentorship and believed that a Maori filmmaker could have a meaningful conversation with a Rotuman or Native Hawaiian or American Indian filmmaker and help her tell her story at Sundance or at All-Roads. For Merata, the vision of a collective peoples, from the Pacific and beyond, was the way to pursue social change.


I cautiously suggest the concept of accent to describe Pacific cinema because there is more work to be done on the topic and because I am using a figure whose wisdom and reach is vast. If I may make a conclusion, Merata modeled a way of Pacific cinema that was both a verb (it was a ceaselessly active formation in pursuit of social change) and uniquely hers (such that others could develop their own voice). Merata nurtured this formation in Pacific cinema and that was her gift to us.

For more on Merata Mita’s life and her work: