Save Our Schools Hawai’i: Tactical Media In the Digital Age
Konrad Ng / University of Hawai’i at Mānoa 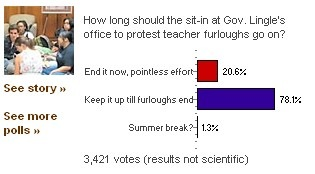 On May 26, 2010, after a deal with local labor, political and business leaders, Hawai’i Governor Linda Lingle agreed to release state funds set aside by the state legislature to eliminate the remaining 17 days during which public school teachers and employees were to be furloughed during the school year. Already, the Hawaii public school system had endured 17 “furlough Fridays” and the contentious agreement between the Lingle administration and the public school teacher union, Hawaii State Teachers Association HSTA), to use furloughs to close the state budget deficit was roundly criticized.1 Indeed, the situation drew a sharp rebuke from Secretary of Education, Arne Duncan, who wrote, “[t]his is the step in the wrong direction. It’s inconceivable to me that this is the best solution for Hawaii.”2 After months of acrimony between the governor, elected leaders, the state Department of Education (DOE), the state Board of Education (BOE), labor officials, teachers and parents, if it were not for Governor Lingle’s consent to release the funds, Hawai’i, a state that ranks low in national educational achievements, would continue to have the shortest public school year in the nation.3 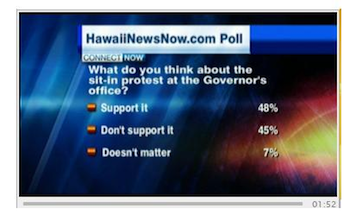 My interest in this event emerges from the activism of Save Our Schools Hawaii (SOS808)((http://www.sos808.org)), a small group of parents and students who organized in opposition to the furloughs and sought to be the moral compass for public education.4 Over the course of several months, SOS808 engaged all parties involved in the furlough decision. On April 7, 2010, the group decided to engage Governor Lingle and entered her office to request a meeting. When denied a meeting, they staged a sit-in to wait for the governor. The meeting never happened and the sit-in ended eight days later in arrests and trespassing citations.5 The plight of SOS808 earned attention from national media outlets and placed a seemingly renewed focus on the state of public education in Hawai’i. However, their impact isn’t immediately clear. During the standoff, Governor Lingle derisively dismissed their efforts. In a letter to SOS808, she wrote “[y]our misguided and misdirected demands that seek my engagement in something that I am already doing will not alter the circumstances before us” and outlined how SOS808 was “misinformed and falsely characterize[d]” her role, adding that she took “offense” at their call to her for action.6 Later, Governor Lingle stated that SOS808 does not

represent all parents…[t]hey don’t represent the community. They’re self-appointed people. And I don’t meet with everyone who demands to have a meeting with me and especially people who have this kind of approach.7 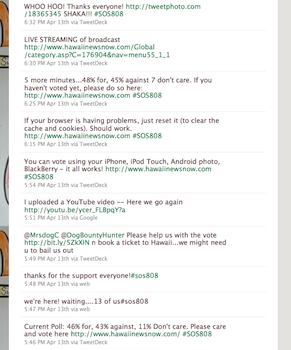 Rather than focusing on the requested meeting and engagement with Lingle, I want to hone in on SOS808’s digital media tactics to suggest that the group’s impact ought not to be measured by arrests, citations and dismissal alone. During their occupation of Governor Lingle’s office, SOS808 pushed their cause through a wide spectrum of digital media networks at their disposal – a website/blog8, Twitter9, Facebook10 and YouTube11 – and attracted sympathizers who engaged in online tactics to support their cause. The digital activities of SOS808 are related to what Rita Raley calls “tactical media”: “the intervention and disruption of a dominant semiotic regime, the temporary creation of a situation in which signs, messages, and narratives are set into play and critical thinking becomes possible.”12 Raley’s focus on new media tactics is rooted in the recognition that the aesthetic politics of some new media interventions and protests are momentary and convey a creative and educational spirit that differs from digital civic disobedience of a strategic campaign. The goal of SOS808 was to engage the Governor to end furlough Fridays, but once the Governor’s opposition became clear, the strategy dissolved and the looming threat of state power led SOS808 to become tactical in its occupation. What did they do? Let me point to a two forms of digital media engagement that are redefining our notion of activism and its relationship to history. 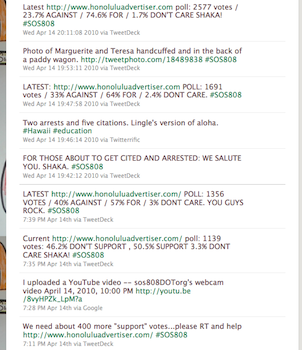 During the sit-in, SOS808 used Twitter to update their status in realtime. Almost a year earlier, the informative power of Twitter became synonymous with political protests following the Iranian presidential election.13 To be sure, SOS808 used Twitter to report its activities, but the group also sought to influence public opinion beyond followers of its feed. In particular, SOS808 posted about public opinion polls held by local news outlets and encouraged followers to vote in support of their cause. The results online are not scientific, but the results hold symbolic power for the group and demonstrate the effectiveness of SOS808’s community organizing. During the sit-in, then newspaper, the Honolulu Advertiser, and the website HawaiiNewsNow.com for television stations, KGMB/KHNL, asked the public about their support of the sit-in. For each poll, SOS808 was behind in the results for most of the voting period, but after numerous tweets drawing attention to the poll, SOS808 was able to register majorities, however slim, in the results. In the Honolulu Advertiser poll which asked, “How long should the sit-in at Gov. Lingle’s office to protest teacher furloughs go on?”, 78% voted in support of the sit-in continuing until furloughs end. In the HawaiiNewsNow.com poll which asked “What do you think about the sit-in protest at the Governor’s office?”, 48% of voters supported it and 45% of voters were in opposition.

Another example of tactical media can be found in the crowdsourcing engendered by SOS808; supporters engaged in individual forms of activism to reflect and spread information related to their cause, and then to spur ripples of action in their widening audience. One site was eBay, the online auction and shopping website. One SOS808 supporter posted the furloughs for sale and asked buyers to purchase a day of school. The price reflected the cost of funding the all public school employees for a day of school. eBay is not known for being a site for activism and the irreverence or naivety of the post place prompts one to question the real efficacy of this engagement in this instance, however, the action expanded the engagement into untraditional and innovative terrain. First, the seller wrote an item description that conveyed SOS808’s main talking points on resolving the furlough impasse that was accompanied by a picture of a sign that stated “Lingle Daycare” as a way of assigning responsibility. Second, the seller classified the “item” within a category which would draw people interested in “Education & Learning” such that the perspective of SOS808 could be pushed on a natural constituency. Another site of engagement was Governor Lingle’s reference on Wikipedia the open, volunteer, online encyclopedia. As the SOS808 standoff unfolded, a supporter documented the events in real time on the governor’s Wikipedia page. However, the activism was calibrated to insert narrative points as opposed to vandalizing the page. The first entry changed the lede section by adding statements and supporting links to suggest that Governor Lingle’s reluctance to meeting members of SOS808 contradicted her campaign pledge to giving parents “a real say in education” and that the governor was responsible for furlough Fridays. At one point, the amendments were deleted by another contributor, but were re-inserted. Eventually, the description of the incident was rewritten to offer a neutral account of the sit-in and remains in the section that details Lingle’s legacy as the Governor of Hawai’i. 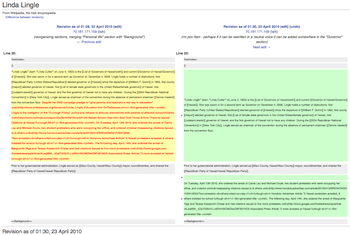 Let me close with two observations that bear the importance of SOS808’s digital media tactics and the role of history. When the furloughs ended, Honolulu Advertiser newspaper reporter Loren Moreno wrote, Furlough Fridays at Hawai’i public schools are a thing of the past. Gov. Linda Lingle yesterday declared an end to one of the most controversial and highly contentious chapters in the history of Hawai’i’s public education system.14 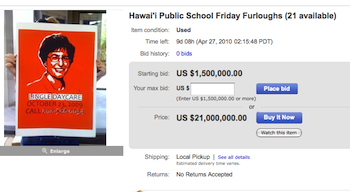 I highlight this passage for how it characterizes the episode of furlough Fridays as a moment in state history that is open to interpretation and debate. Second, at the climax of SOS808’s occupation of Governor Lingle’s office, the New York Times reported that the Library of Congress and Twitter, the social networking and microblogging service, announced that the Twitter archive will be collected and preserved by the Library of Congress, “[l]ibrary officials explained the agreement as another step in the library’s embrace of digital media. Twitter, the Silicon Valley start-up, declared it ‘very exciting that tweets are becoming part of history’.”15 I contend that the case of SOS808 has profound consequences especially when we consider that during this episode and to date, Governor Lingle has no blog, Twitter feed, YouTube channel or active Facebook page. These moments highlight how digital activism will ensure a specific version of events in future drafts of a “controversial and highly contentious” chapter in the history of Hawaii’s public education system. 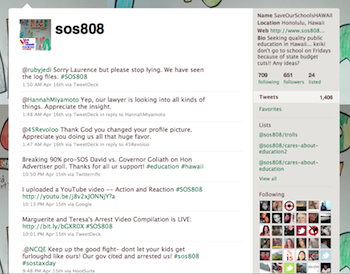