The Oh No They Didn’t logo and slogan

On March 2nd, 2010, Betty White was found dead in her home, after a day of visiting her grandchildren. Or so said the story on Oh No They Didn’t, a user-generated content website featuring gossip and entertainment news. In recent years, the site has become one of the more important sites in the world of celebrity gossip because of its open nature, encouraging readers to post their own stories and engage in extensive conversations in the comments section. With its 100,000 plus members, it stands as the largest community on LiveJournal.1 However, even with several moderators watching over the group, the sheer number of posts submitted daily means false stories occasionally slips through the cracks. These stories are generally caught pretty quickly and deleted. Unfortunately, the news often still spreads pretty fast, largely thanks to Twitter, but also due to other websites picking up the story without checking the source. This is essentially what happened with the Betty White article. The quick spread of the news that Ms. White was dead highlights some of the problems with many celebrity gossip websites and blogs, which largely have become more interested in breaking a story than actually being accurate.

Before looking at how this rumor spread, though, it is important to note why the story was approved by the moderators and why people believed it at first. When the prankster originally submitted the post, it featured an article about the actor Jeremy Renner.2 After a moderator approved it, the original poster edited the entry and turned it into the rumor about Ms. White. But what made it believable? TMZ was credited as the source, with a falsified screencap and a made-up link used as proof that the story came from their website. Since TMZ is generally considered a reputable source due to their thorough investigative practices3, readers originally believed the story without actually checking TMZ’s website. Many of the initial comments on the post were full of people expressing their grief over Ms. White’s presumed death. 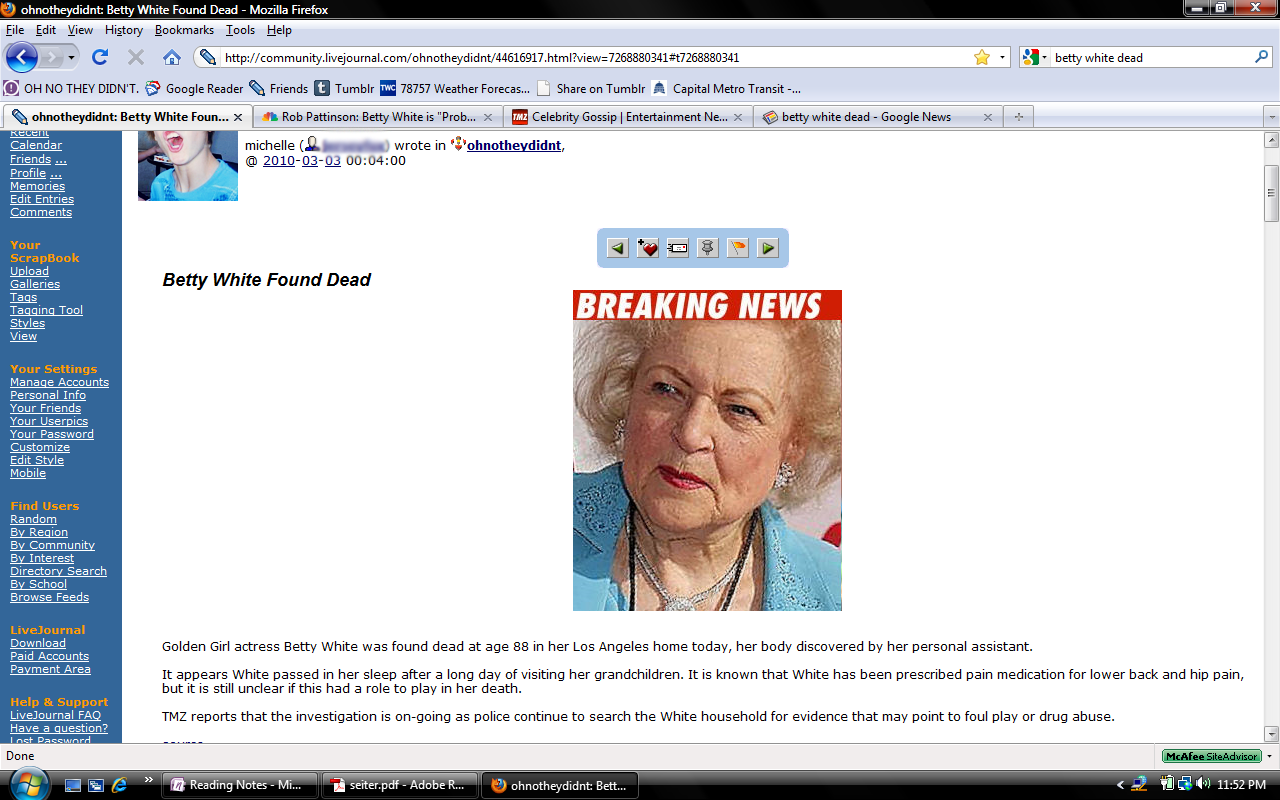 The fake story posted on ONTD4 (Click image to enlarge)

However, doubt started to set in and many of the readers questioned why the story was no longer on TMZ’s website. Also, many of the details provided were clearly wrong, such as Ms. White having grandchildren. The original poster kept insisting she had taken the story from TMZ and a few accomplices backed her up on this, saying they had also seen the article on TMZ first. They even went as far as to create a full screencap of the story on TMZ as proof, but several astute readers noted the difference between the font used in the fake screencap and the one actually used by TMZ.5 While this kept the rumor going on a little longer, it left many readers confused as to what to believe. 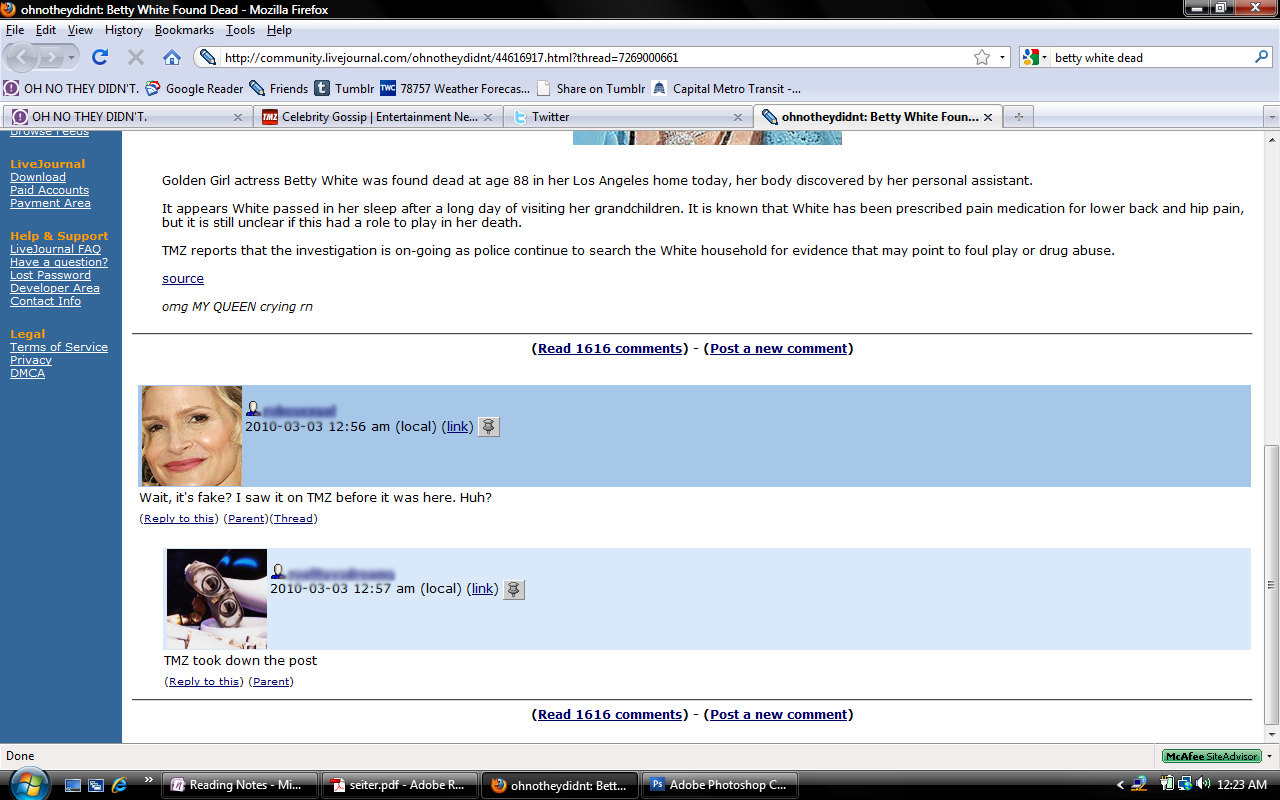 It did not help that while some were trying to discern the veracity of the story, it had already started to spread online, largely with the help of Twitter. ‘Betty White’ became a trending topic, and went as high as the second spot within roughly an hour after the story first appeared. Before it was deleted, the post on ONTD received more than 1700 comments from those expressing either their sadness at the possibility of Ms. White’s death or their frustration with the person who started the rumor. After it was deleted, ONTD members flocked to another post to continue the conversation, with many hoping that someone would be punished for starting the awful rumor about Ms. White.6 Eventually the rumor was debunked, but the damage was done. The story had spread far and wide and required several reputable sources to confirm that Ms. White was not dead before people were satisfied. 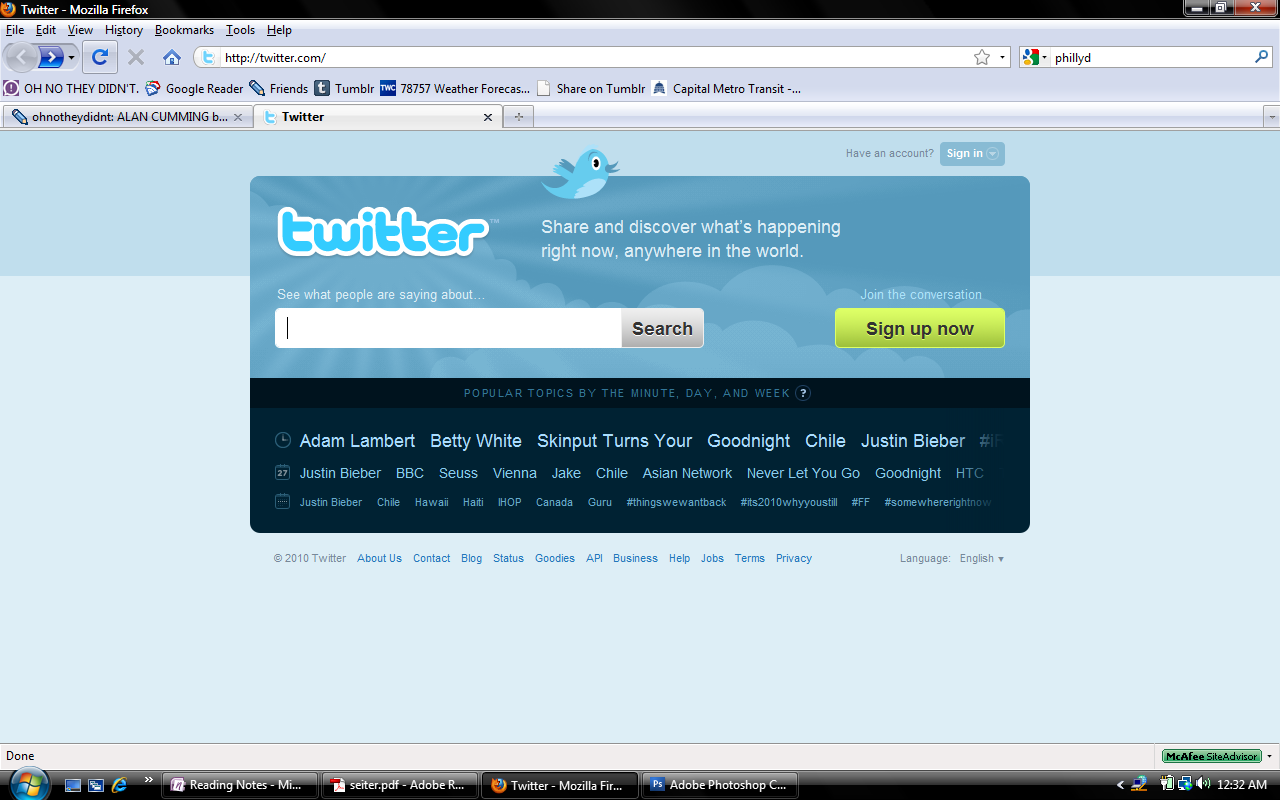 Ms. White is not the only victim of a rumor spread by ONTD pranksters. More recently, another ONTD troll posted a story saying that Michael Lohan had tweeted that his daughter Lindsay was HIV-positive, once again including an altered screencap as supporting evidence.7 Unfortunately, this story spread even further and was picked up by many major news sources. While most didn’t believe Ms. Lohan was actually HIV-positive, almost all the news sources that picked up the story were sure that Mr. Lohan had actually tweeted the remark and simply deleted it soon afterwards, even though he kept insisting he must have been hacked. Almost no one outside of ONTD even considered the possiblity that the screencap was fake. Eventually, one of the maintainers of ONTD posted an apology and telling the truth about what happened, while also criticizing other gossip sites for spreading the story without investigating.8

While it may seem silly and almost hypocritical of ONTD to criticize others for not investigating their stories properly, I believe they are allowed to make such criticisms. Even though the site has become a major player in the online gossip world, it plays a very different role than most other sites. ONTD has always been more of a round-up of entertainment news and gossip, plus plenty of snarky commentary to along with it. It rarely claims to be the source of any news or gossip, even if plenty of blogs, such as Perez Hilton and Best Week Ever, constantly cull stories from the pages of ONTD. Because of the nature of the site, it stands apart from the more journalistic based blogs that repeatedly tout inside sources and exclusives. ONTD is more about the community and the conversations formed around the stories.9 The other gossip hounds in the online sphere should keep this in mind next time they consider copying another story from them.