The Minutemen in the Media: The Rise and Fall of the Populist Movement
Carolyn Brown / American University 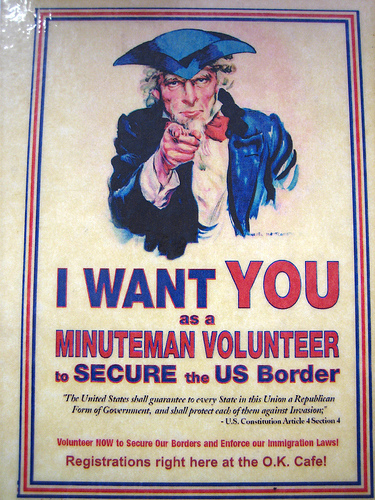 The Minutemen Call to Arms

After five years, the Minutemen Civil Defense Corps (MCDC) is no more. This ended a long and storied relationship with the television media, who, for years, have given voice to anti-immigration groups and framed the immigration debate.

The beginning of the end occurred on March 15th, 2010, when Carmen Mercer, the president of the MCDC sent out a call to arms of sorts, for a new muster. In a “high alert” e-mail she wrote:

“For eight long years we Minutemen played nice; yet for the past eight years we firmly expressed our opinions and desires for the border to be secured. This muster will be completely different … This March we return to the border locked, loaded and ready to stop each and every individual we encounter along the frontier that is now more dangerous than the frontier of Afghanistan.”1

Word spread of Mercer’s call to arms, which included urging Minutemen to bring “long arms.” Mercer says there was a “more feverish response than she expected.”2 A week later, The MCDC dissolved because of what its members say were liability concerns. Mercer says she was worried her recent “call to action” would attract the wrong people.3

The Minutemen already had proven successful at capturing the media’s attention and framing themselves as patriotic Americans. They have often been portrayed in a positive light in the mainstream television media, without much criticism or question. Because of their relatively small numbers most Americans have little direct contact with them, which makes television news’ framing of the Minutemen all the more important.4

While the national organization of the MCDC disbanded, other patriot, vigilante, militia, or populist movements are ready to replace them. The media, specifically television news, continues to be drawn to these groups, empowering and strengthening their message by giving them a large audience.

The beginnings: The big media embrace

To fully understand the Minutemen’s relationship with the media, it’s important to consider the vigilante group’s origins.

Chris Simcox founded MCDC in 2005. The Minutemen have described themselves as a neighborhood watch group whose mission is to secure the United States border, but others would consider them a modern militia group. In reality, the group dates back to 2001 when, according to the Southern Poverty Law Center, Simcox quit his job as a kindergarten teacher, left Los Angeles and moved to Tombstone, Arizona. After he encountered what he described as “platoons” of undocumented immigrants while on a forty-day solo camping trip, he decided to dedicate his life to national security.5 Simcox first called his group the Tombstone Militia and eventually changed the name to the Civil Homeland Defense Corps. The name of the group changed again to include Minuteman, when Simcox joined forces with the California-based Jim Gilchrist, who had started a group called The Minuteman Project.

Gilchrist and Simcox launched the first large border watch operation in April 2005, and it took the media by storm. They had a large audience: “At times, journalists and camera crews outnumbered the actual watchers; it made great prime-time content for Fox News and CNN’s resident anti-immigrant talking head, Lou Dobbs. Simcox and Gilchrist were the faces of the movement, and they appeared on air so frequently that they practically became household names.”6 It seemed the media couldn’t get enough of Simcox and Gilchrist, who had become adept at promoting their group and controlling their message, specifically on television. Gilchrist and Simcox were vibrant guests on cable news, articulate and comfortable in front of the camera.

By December 2005, the Gilchrist and Simcox partnership crumbled and two separate groups were formed: The Minutemen Civil Defense Corps (the Simcox group) and The Minuteman Project (the Gilchrist group). Whatever the name, both Minuteman groups were manifestations of the anti-government, patriot militia movement.

The current Minutemen derive their name, and to some extent their ideology, from the Minutemen of the American Revolutionary period of the 1700s. The militia myth is rooted in the early battles of the Revolution: “According to the myth, American democracy was won by small groups of patriots who had the courage to face, and the wisdom to effectively fight, the world’s most powerful nation… This myth is deeply ingrained in American political life.”7 The modern Minutemen also see themselves as a courageous group of patriots. This depiction of the Minutemen of the American Revolution is not totally accurate, but has provided fertile ground for the modern American militia movement to grow. The reality was, militia forces were not effective in battle.

The militia myth is also shaped by values of individualism, goodness, trustworthiness and tactfulness.8 These values, derived from the myth of the militia of the American Revolution, drive modern militia groups like the Minutemen. The media has allowed the MCDC to define itself and its image, in the likeness of the militia myth.9

The re-invention of the history of the American Revolution as well as the American frontier is also part of the militia myth. The Minutemen have recreated the idea of the lawless frontier, or the Wild West, and media has echoed this without question. In the CBS News story below, titled “Modern Day Minutemen,” reporter Lee Cowan refers to the border as, “not a new frontier, but an old one.” Cowan also refers to a “threat to the country,” when discussing the border and immigrants.

In another CBS News story (below), reporter Vince Gonzalez says the Minutemen are “a tip of the tri-cornered hat to the soldiers of the American Revolution.” Gonzalez also refers to Minutemen as doing a “job,” and even suggests that the border patrol supports the Minutemen’s “job.”

descendants of the “soldiers of the American Revolution”

The MCDC has used the militia myth to further their anti-immigration cause. The Minutemen evoke images of this myth with an emphasis on weapons and use of patriotic symbols, such as flags. The television media reinforces the Minutemen’s ideology with the images and the words used. The ABC News story below, and the two previous CBS News reports, repeatedly depicts the American Flag and Minutemen carrying weapons while dressed in camouflage. The Minutemen believe undocumented Mexican immigrants threaten their way of life, so they need to “guard the border,” and protect the country. They establish ownership of nation through use of the American Flag.10 Images of the flag appear in many shots, including one shot where Chris Simcox, the president of the MCDC, is wearing an American Flag hat.

The Beginning of the End?

In the spring of 2007, while MCDC membership numbers were dropping, Chris Simcox came under fire for alleged mismanagement of member’s donations intended to build a border fence on private land and support political candidates. Simultaneously, the media portrayed the MCDC members as altruistic victims. The Washington Times published several articles investigating Simcox and his financial accountability. Simcox had fired a group of state-level organizers after they met to discuss their problems with his management of the MCDC.11

CNN questioned Simcox’s so called high-tech border fence, calling it a “cow fence.” But, while the below CNN report is critical of Simcox, it idealizes the Minutemen members as generous, patriotic Americans. CNN Reporter Abbie Boudreau says of the Minutemen movement, “it was a reaction to the horror of 9/11… a way for people to really do something to make American safe… for many it’s a noble calling.”

The Minutemen were back in the news in 2008 when they joined forces with another group: families who had loved ones killed by undocumented immigrants. The Minutemen were protesting sanctuary cities, cities that protect illegal immigrants. The Minutemen were pressuring lawmakers to punish these cities by withholding state funding.12 Partnering with victims families seemed to draw sympathy to the Minutemen. In the report cited below, ABC News reporter Nannette Miranda called the relationship between the Minutemen and the victim’s families a “powerful alliance” and referred to an illegal immigrant as “someone who shouldn’t have been here in the first place.” The media perpetuated the Minutemen’s message. In both the ABC News report and the Fox News story, cited below, migrants are primarily portrayed as “murderers” and “criminals.” Reporters use language and images to depict immigrants as such.

Negative publicity that began in the spring of 2009 was a precursor to the dissolution of the MCDC.

On May 30th, 2009, 29-year-old Raul Junior Flores and his 9-year old daughter were murdered in a violent home invasion in Arizona near the Mexican border. The suspects had ties to the Minutemen and are being charged with first-degree murder. One of the suspects, Shawna Forde, was a former member of the Minuteman Civil Defense Corps and had participated in border watches in Arizona. This association and the publicity following the murder was stress for an already splintering MCDC. The media widely reported the Minuteman connection.

Though the MCDC has denied it, the group had been linked, in the past, to racist and white supremacist elements. Despite claims that their organization is not racist, members of the Neo-Nazi National Alliance have been associated with the Minutemen.13

About the same time as the Arizona murders, Chris Simcox stepped down as president of the organization. In April 2009, Simcox announced he was running against John McCain for his Senate seat. Simcox garnered media attention with his Senate bid, and used his television appearances to promote his anti-immigration agenda. Simcox dropped out of the race in February 2010 after fellow conservative radio talk show host and former Congressman J.D. Hayworth announced he was challenging McCain. The following month, the MCDC dissolved.

The path that led to the decline and fall of the Minutemen Civil Defense Corps is almost precisely that of previous right-wing populist movements, like the Klan of the 1920s and the militias of the 1990s.14 The MCDC have followed in the footsteps of other organizations: “The pattern goes like this: The group is beset by financial manipulators who seem naturally drawn to them. Then, following an initial wave of popularity, the group splinters under the pressure of competing egos into smaller, more virulent entities who then unleash acts of public ugliness and violence that eventually relegate them to the fringes.”15

Though the Minuteman movement has lost steam, there is no doubt that another populist movement will take its place in the media spotlight. Right now, the tea-party movement has taken center stage, and the mainstream television media is conveying their message.

1. The Minutemen Call to Arms