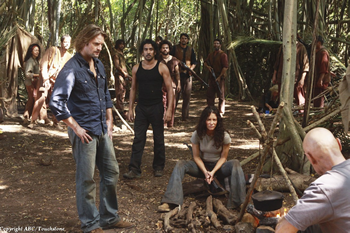 Promotional still from the sixth season of Lost

Contemporarily, we are so fascinated by the unprecedented rapidity with which something goes viral and becomes a part of the lingua franca that we sometimes forget the fact that normally, a thing becomes a part of our cultural fabric gradually, so much so that we don’t even notice exactly when it becomes ubiquitous; it just is, as though it always has been, even though its rise to omnipresence took years to achieve. This is especially true when it comes to the movies’ place in the cultural genome, a realization by which I was repeatedly struck while watching the final season of Lost unfold. The show is justifiably much lauded as being wildly original in the context of network TV, but I can’t help but notice how often it includes intertextual references to movies to underscore its narrative points.

A telling example of this phenomenon happens in Episode 8 of Season 6 of Lost, “Recon,” in which Locke /The Man in Black (Terry O’Quinn) is explaining to Kate (Evangeline Lilly) why Claire (Emilie de Raven) now hates her. When Kate tells him, “That’s very insightful. Coming from a dead man,” Locke dramatically pauses before replying, “Well, nobody’s perfect,” which is also the famous last line of Billy Wilder’s Some Like It Hot (1959), said by Osgood (Joe E. Brown) after Jerry/Daphne (Jack Lemmon) reveals that he’s a man. You would think that the blatant nature of the reference might result in a deluge of analysis, but the opposite has been the case, with comparatively subtle references to things like the novels Watership Down and A Wrinkle in Time getting more notice. As of this writing, it’s mentioned on neither the “movie connections” section of the episode’s imdb.com entry nor under the “Cultural references” subheading of its Lostpedia article. It is noted in the Lostpedia Discussion section, but sloughed off as more of an in-joke or a stretch or just a coincidentally used common phrase as opposed to something to be taken more analytically seriously. While I suppose I can believe that maybe the phrase’s initial inclusion was accidental (although given its place in popular culture I doubt it), I can’t believe that none of the many film savvy folks who read the script prior to its being produced didn’t notice and comment on it and the fact that it remains leads me to believe the authors’ (Elizabeth Sarnoff and Jim Galasso) wanted it in and had their reasons for doing so. The phrase is just so iconic that I can’t believe otherwise. 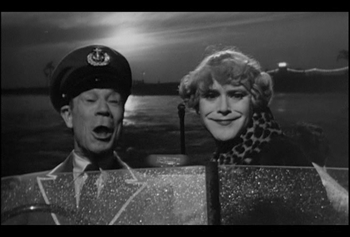 Audio of last line from Some Like It Hot 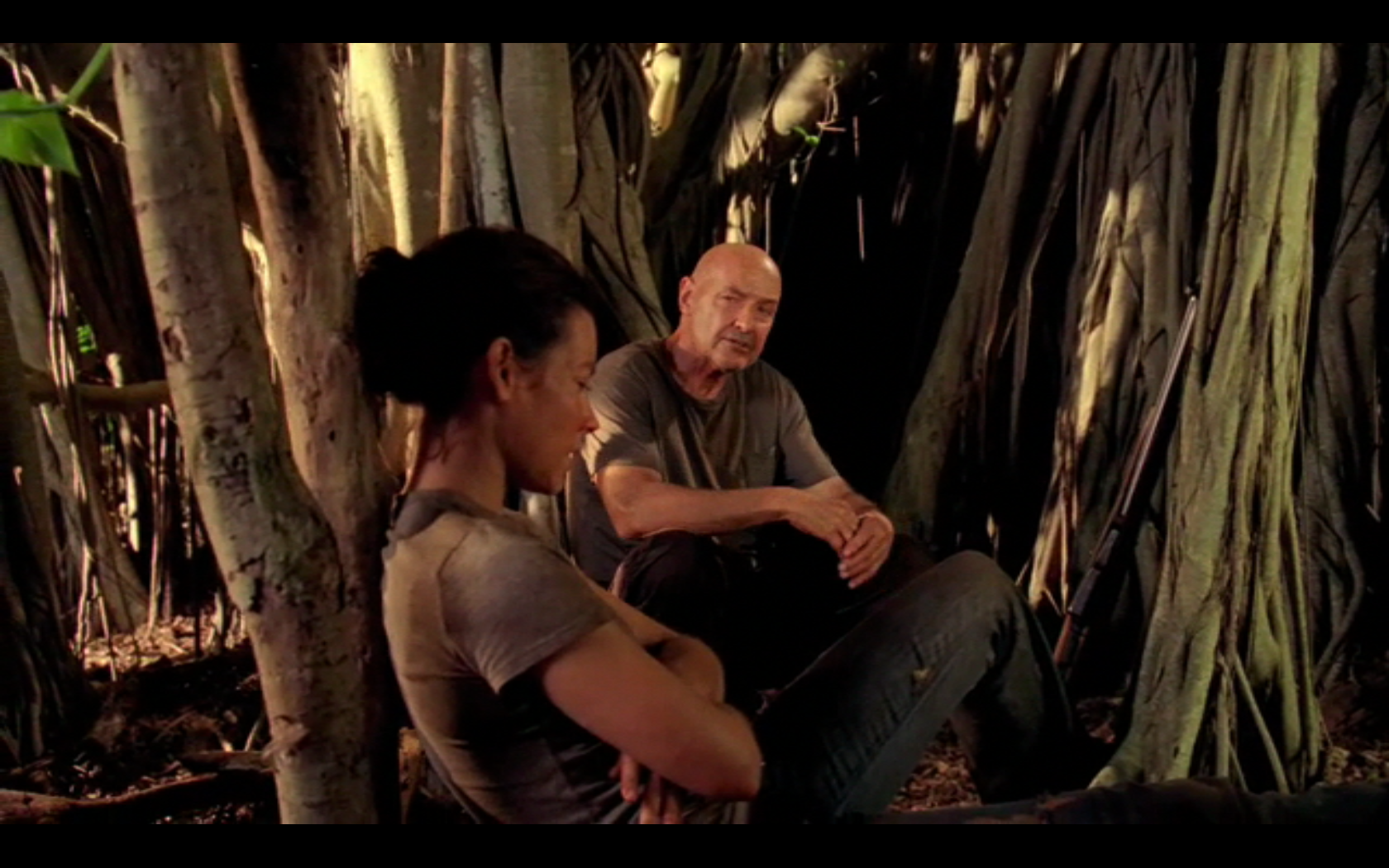 Obviously, it’s open to interpretation, but for me the beauty of its use in this context is in the way it inverts the source. In Some Like it Hot, “Daphne” is the one who is not what he is supposed to be and after his confession, it’s Osgood who surprisingly dismisses his imperfection. Conversely, in Lost it’s not Locke who confesses; instead, Kate, who he’s trying to fool, calls him out. In this instance “nobody’s perfect” is the con man’s chilling excuse rather than the victim’s humorous absolution of the perpetrator. But were Some Like It Hot not as culturally prominent as it is, I wouldn’t be thinking about the scene in this way and that its incorporation into Lost acts as a kind of shorthand to create a response in the same way a stock character or situation does is what makes its use so powerful.

Less noticeable but no less interesting are the uses of specific shots from movies that Lost incorporates into its episodes. The visual language of cinema and TV is finite and certain shots recur endlessly, rendering their repetition meaningless as concerns their connection with other sources and any interpretive light they might shed on a particular scene. A case in point occurred in the final episode of Lost, “The End,” in which I laughed out loud when Jack jumped at Locke. It’s a shot that’s currently used ad nauseam in action movies and I immediately remembered I’d just seen it in Clash of the Titans (Leterrier 2010). Given their respective relationships with their fathers and the role destiny plays in their tales, I suppose you could claim a connection between Jack (Matthew Fox) and Perseus (Sam Worthington), but in this instance I do think it’s just a happy (at least to me) coincidence. 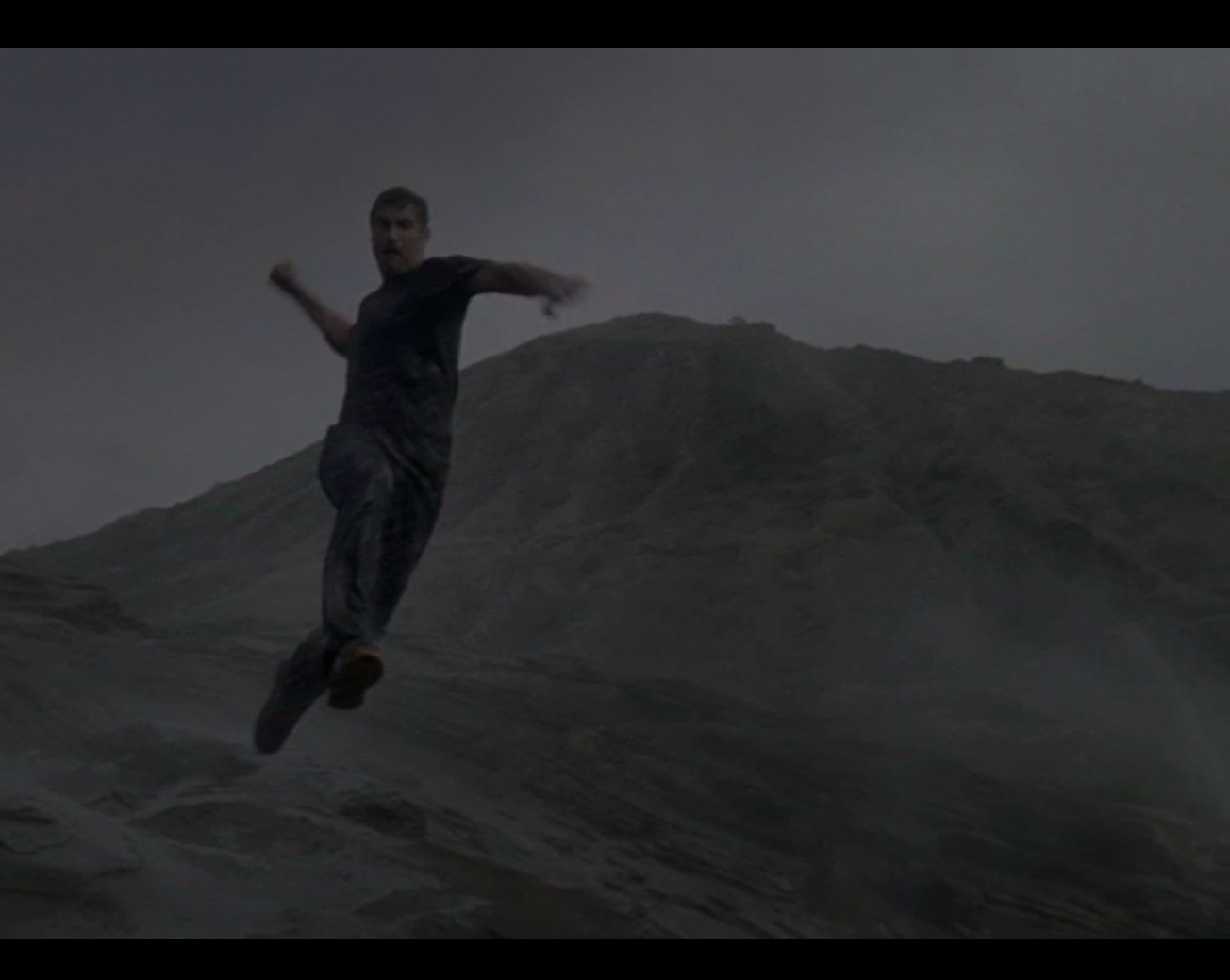 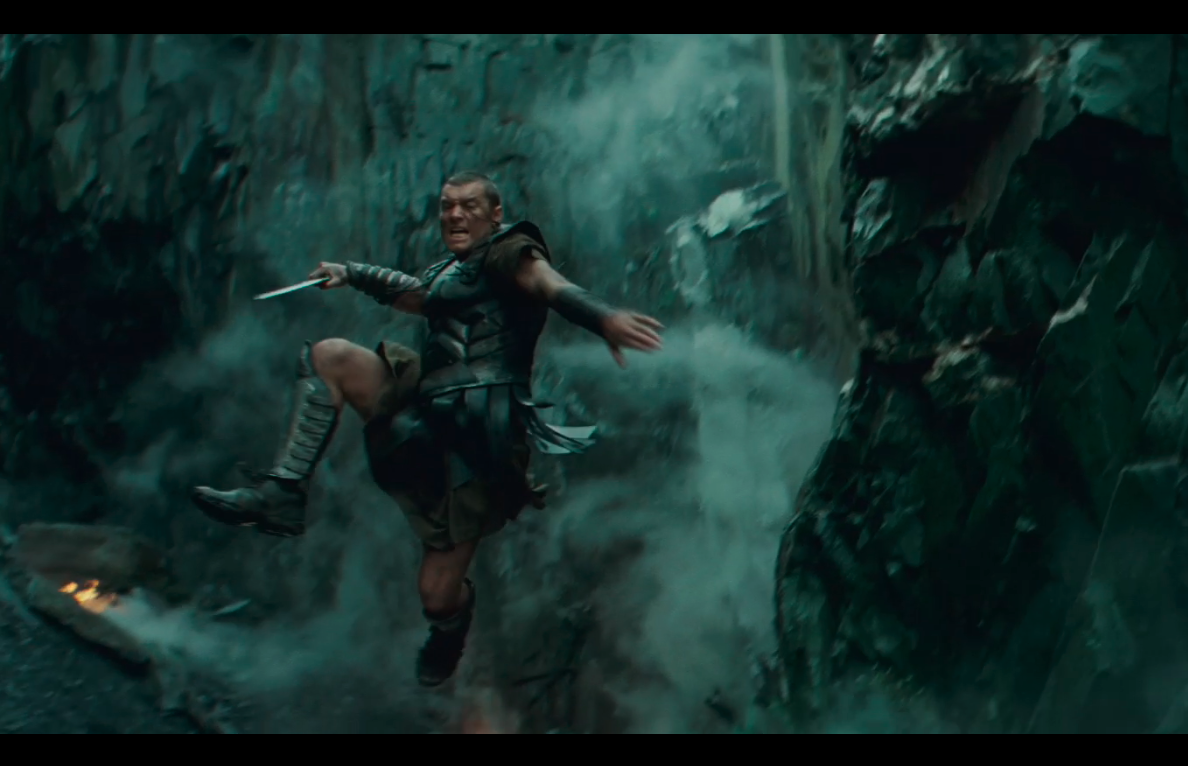 On the other hand, there’s a helicopter shot of a group led by Jack that recurs earlier in the same episode. It’s in many ways a mirror of the introductory shot of Maria (Julie Andrews) in The Sound of Music (Wise 1965). This too may be wholly unintentional, but it’s harder to let this one slide as inconsequential. Like the aforementioned reference to Some Like it Hot, this too neatly inverts its source. In The Sound of Music it’s a shot that introduces us to our heroine singing in the prelapsarian Eden of the Austrian Alps and it’s full of magic and wonder and leaves us anticipating that which comes next as she races off to face her future. It’s a sublimely joyous shot and it serves to reinforce our belief in Maria over the remainder of the film, even though Nazis soon overrun her Eden. In Lost, the shot comes during “The End,” by which time we know these characters well and we also know there’s nothing else to come; whatever the end is going to be, they’re going to face it and the story will be concluded, if not exactly resolved. And the seemingly paradisiacal setting of the island does not fool us; we know that it isn’t necessarily what it appears to be and that humanity has long since fallen. They leave not with the optimism of a songbird, but with the grim determination of warriors knowingly going off to die in battle, which rather than filling us with anticipation instead fosters a sense of dread. We’ve seen their foibles; we know they aren’t invincible and we’re far from certain they’ll be able to overcome whatever awaits them and the shot has the neat effect of confirming our doubts. 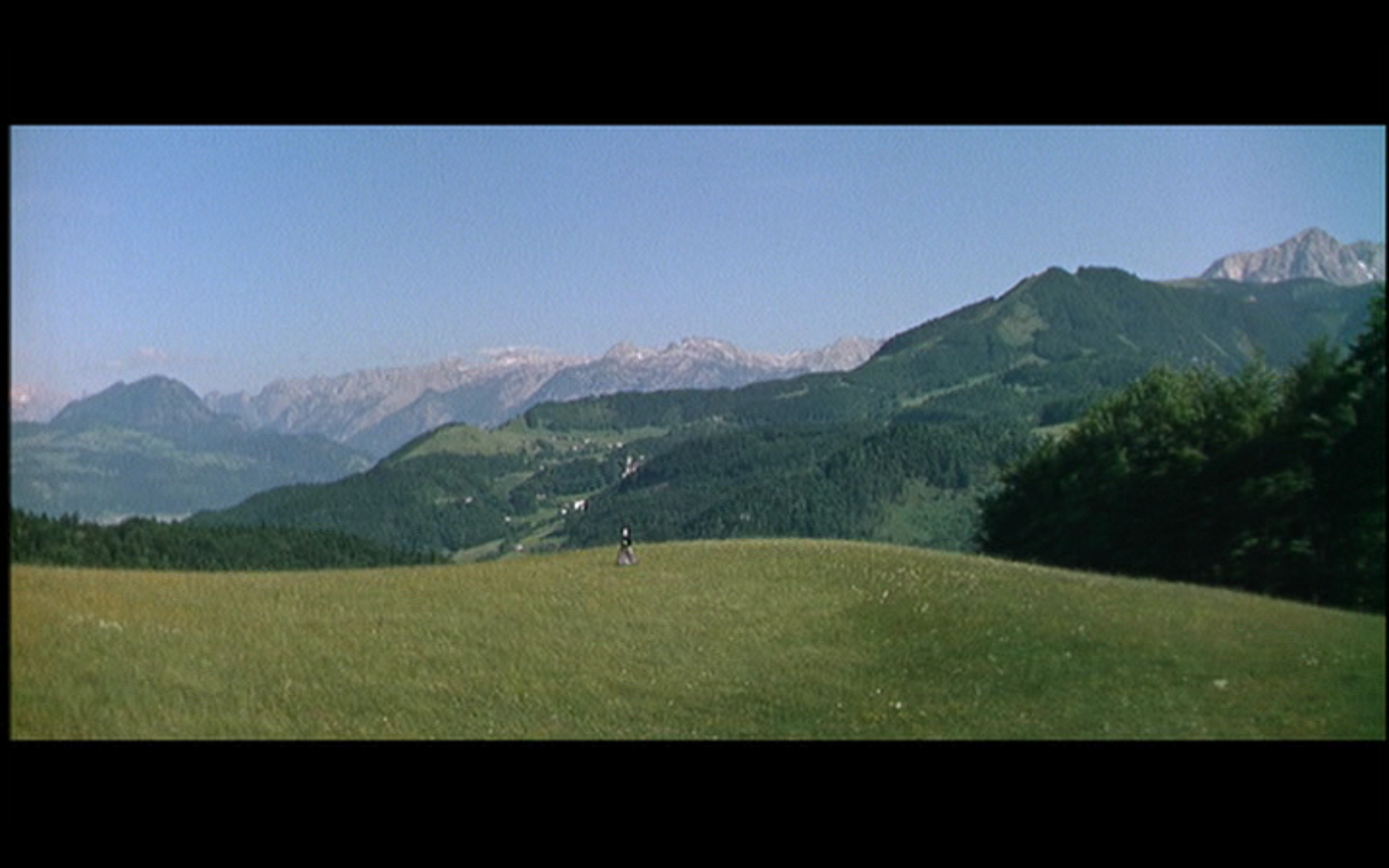 Helicopter shot from The Sound of Music 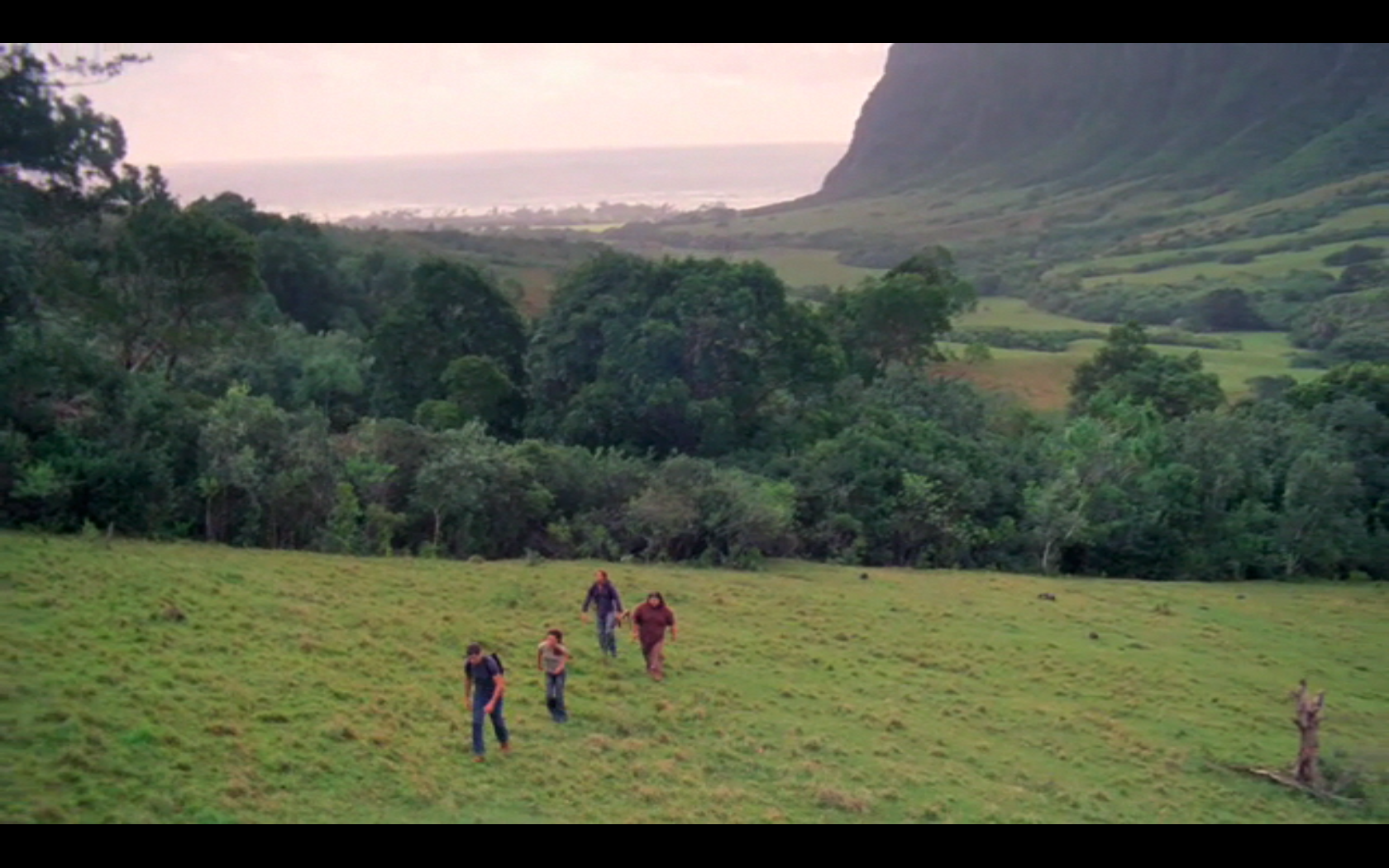 I’m far less certain that this shot was meant to reference The Sound of Music than I am that “nobody’s perfect” purposely quotes Some Like it Hot. But whether it was supposed to or not is beside the point because I responded to it as though it was, which allowed me to consider the moment contextually in a way I wouldn’t have otherwise done. As my reading of Lost illustrates, we are at an interesting point in media history, one in which so many of us have read and seen so many things that have become a part of our intellectual DNA that we can and often do add our own sources to a text that was never meant to have them. We are collectively using the same materials to create our individual narratives, the result of which, to quote Whitman, is that in contemporary narrative visual media “every atom belonging to me as good belongs to you.”