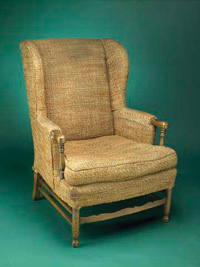 With Archie and Edith Bunker’s living room chairs are permanently housed in the Smithsonian, alongside one of the Fonz’s leather jackets, All in the Family (1971-1979), is considered integral to television heritage and notions of classic TV. In his book Rerun Nation, Derek Kompare calls the 1970s the “beginning of television’s historicity, that is, its articulation into discourses of history and memory.”1 Marking the ways in which television memories and broader postwar memories unite to create a common television heritage, “past television is now protected and exploited as both private and public property, through copyright and continued cultural recirculation.”2 The proliferation of media formats and outlets in the past twenty-years recontextualize Lear’s most popular sitcom, All in the Family, and reconfigure the icon that is his most famous character, Archie Bunker.

All in the Family archival materials, and the context in which they have gained new life with recent technologies, play with this authorial intent. Available archival sources for All in the Family include: university and non-profit film and television archives; the occasional cable TV marathons with Lear curating; DVD box sets3 ; the 2009 Norman Lear Collection4 ; video clips on the boutique channel, TVLand, and its attendant website; and an emerging YouTube archive.5 All of these archives are incomplete in their own way, impacting the interpretation of the sitcom’s legacy. And, yet, the editing of clips for contemporary consumption, the composition of DVD box sets, and user-edited YouTube postings provide important indicators for contemporary approaches, or avoidances, of the social issues Lear brought to the American table for discussion. Which archive takes precedence for determining the impact of Lear’s sitcoms on the viewing public? How does that notion of a viewing and actively discoursing public change with new media and its active audience of editors, remixers, and commenters?

In rare instances, university and non-profit archives episode copies are couched within revealing bits and pieces of the commercials that aired as part of the flow of the original All in the Family broadcasts. Noting which advertisements appeared along with particular broadcasts offers clues to linking shifts in the show’s content and advertisers’ presumed demographics. If, as Todd Gitlin posits, commercials “get us accustomed to thinking of ourselves and behaving as a market rather than a public, as consumers rather than citizens,”6 then viewing the commercials aimed at Lear’s 1970s audience are key to understanding how social movement ideals passed through his sitcoms, their accompanying adverts, and on to All in the Family’s presumed citizens/viewers/consumers.

Most full episodes end with Archie chagrined, if not a changed man, but in new media clips, Archie always gets the last word. Such reproductions and remixes of Archie’s worldview, maintain the circularity of the sitcom genre. Barry Langford notes that the “sitcom traditionally depends heavily on an unusual degree of circularity and even stasis in its basic situation.”7 All in the Family’s structure, as Lear and the show’s writers structured it, established an ongoing dilemma from week to week: Archive’s bigotry versus Mike’s liberalism. The end of All in the Family episodes will usually find Archie conceding some ground on his bigotry, but not admitting defeat, through tight close-up and a “what are ya gonna do?” expression. However, excerpting the series for YouTube and other web-based contexts gives the impression that Archie’s bigotry is a resolution and point of closure for the viewer. Mike’s, Gloria’s, and Edith’s response along a continuum of liberalism are generally excised or overridden without Lear’s closing shot of Archie’s comeuppance.

Despite this homophobic and nationalist assertion that Archie ascribes to a friend of Mike’s, as the episode develops, it is in fact a dear, longtime, manly drinking buddy of Archie’s that turns out to be the “fag.” This resolution and challenge to Archie’s homophobia is entirely absent in this YouTube clip. Instead, the England-as-fag-country clip is hotlinked and replicated across the web to make Archie’s words appear as the declarations of an historical American figure on par with a political or great intellectual thinker. So much so that, on a white supremacist website, one poster is able to co-opt Lear’s character to query, “I’m sure most of us remember the old 70s sitcom All In The Family. One thing I remember from this show is that Archie used to always say that ‘England is a country full of fags’. Is this true?”8 Based on the prevalence of the clip on the web, it’s doubtful that this poster has, for thirty-six years since its first airdate and syndication, held onto this nugget that he and his fellow posters deem true. Far removed from Lear’s original intent, the comments that continue to build from first post to today are revelatory of public debates that range from the validity of homophobic views to whether “England is a fag country” because of its nationalized health care to disproportionately hostile debates over same-sex marriage. Archie’s comments are frozen in YouTube amber, but the debates that his comments spark riff on contemporary, hot button social issues. The re-use of Lear’s original material, taken out of context and removed from the rest of the Bunker’s condemnations, finds new life as historical truth through classic television on the web.

If sitcom writers continue to call upon Archie Bunker as the prototype for America’s newest “lovable bigots”–South Park’s Eric Cartman, Family Guy’s Peter Griffin–under rubrics of political correctness backlash or satire, its imperative to backtrack and understand not only Archie’s historical context, but also the contemporary archival context in which Archie’s views are remembered and reproduced.9 Across the spaces, places, and formats of archives, notions of “completeness” and archival “purity” continue to breakdown and reconstitute along with All in the Family’s audience and interlocutors.