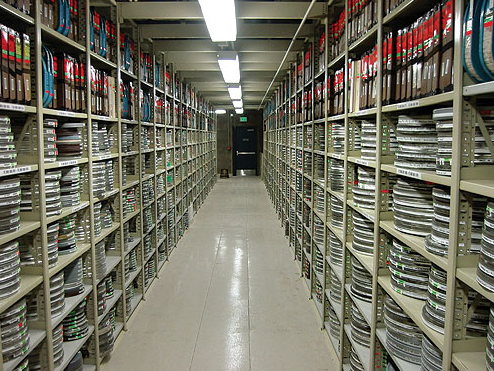 Founded as a space “to read about and discuss the changing landscape of contemporary media at the speed that media moves,” Flow has defined itself as an alternative space in which we can examine the media present as it happens. In this special issue we sought to examine not only the media present, but the past and the past’s place in the present. Among the questions featured in our call for submissions were the following: In what very real ways do we form, practice, and extract from the archive? How does media function in the archive and as an archive? How can archival study be used to further public knowledge and historical consciousness? Which voices are filtered out, and which gain admission to the archive? We hoped to examine a variety of media archives both conventional and unexpected. The response and the resulting issue represent the realization of that hope.

The columns we publish here clearly defy easy dichotomies between old and new media, between traditional paper, celluloid, and video archives and newer digital ones. While some columns examine the paths which familiar figures have taken through a variety of media and archives– from Marlon Brando on 35mm prints to Mastercard Ads and YouTube or Archive Bunker from the Smithsonian to TVLand and DVD box sets— others look more closely at the media through which those paths are traveled– the process of restoring Goldbergs kinescopes or HBO’s broadcast flow. Still others examine archival institutions themselves from older ones like the Library of Congress and its acquisition of Twitter and found artifacts in the Walter Ong Archive at Saint Louis University to newer iterations like the feminist film archive at the Los Angeles Woman’s Building and the more experimental efforts of the Netherlands Institute for Sound and Vision and SAW Video’s Mediatheque.

Yet equally important to what this special issue is, is what this special issue does. One of our goals here was not only to discuss the archive but to present Flow as an archive which, like the subjects explored here, has the potential to problematize the division between “old” and “new” media not only in theory but in practice. To this end, one of the most exciting things about this issue and its columns is how they take advantage of Flow as an online space which can integrate video and images, YouTube clips, photographs and scans of archival documents with analysis and discussion.

To set the stakes for this issue and why archives matter, we opened our call for submissions with the following quote from Michel Rolph Trouillot’s Silencing the Past:

We urge you to keep these words in mind as you explore both the work presented here and the past as you encounter it in everyday life. Further, we look forward, as always, to the comments and dialogues this issue inspires because this is another important way in which Flow can reinvent the archive not as a static moment of fact assembly but as a dynamic experience of the past and the present.