Watching The Masters: Golf Becomes Exciting (In All the Wrong Ways)
Paul Achter / University of Richmond 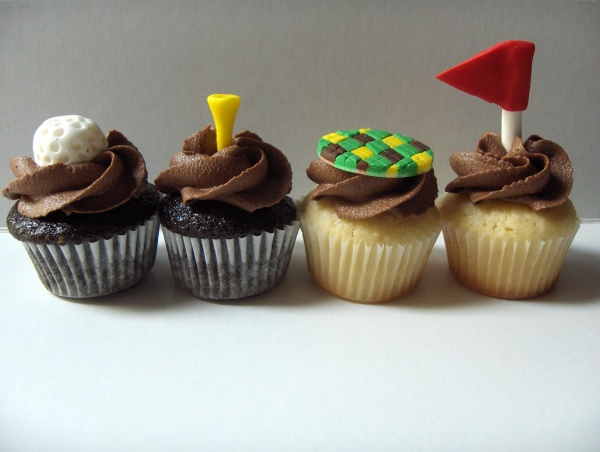 As televised sports go, golf provides more than the usual number of challenges. For starters, golf is almost all downtime. During a typical tournament round, which lasts anywhere between four and six hours, players spend the majority of time doing three boring things: planning shots, walking to and from shots, and standing around while other players hit shots, and a typical tournament, they do this for four consecutive days. Visually, this just doesn’t work. The golfer’s swing and shot—the only real visually dynamic moments of action in golf—comprise just a small portion of a round. The rest is walking, waiting, and planning shots—nothing interesting enough for television. By cutting from player to player golf producers maximize the number of shots shown to give viewers a roughly synchronous experience of the tournament. Tournaments themselves occasionally do produce strong narratives: the best golf television happens when the tournament leaders make important shots at roughly the same time.

In addition to its technical anti-spectacle, golf tournaments are emotionally muted events, to say the least, and golf commentators are accordingly understated. When Tiger Woods sinks a long putt and pumps his fist, sending fans into a frenzy, it’s but a small episode in a dozen hours of weekend TV. In most cases, the professionals we see on television are a calm bunch. You can’t really blame them: unlike many other competitive activities, where athletes can gauge their opponents directly, golf isolates golfers from their opponents. Unless they regularly look at a scoreboard, which many are loathe to do, a tournament golfer cannot always be sure of his or her position in the tournament, leading them to adopt the philosophy that they are “playing against course” and not the other players. 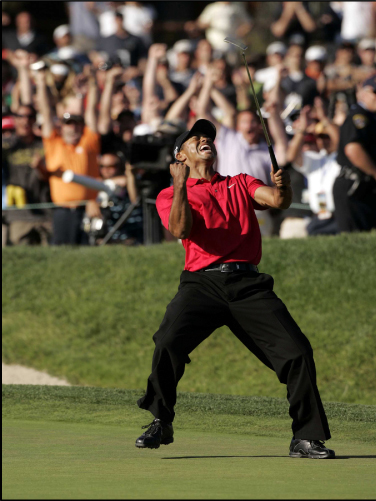 Tiger’s fist pumps are legendary, but they are relatively few.

Golf television1 compensates for its inherent lack of dynamic visual content and the emotional restraint of the players by attempting to endear audiences to the players, which is accomplished through the invention and circulation of narratives about the players and the tournament. In this respect, golf is like all major sports TV. Fans who know back-stories about a few of their favorite players experience their sport on television in a different way than non-fans do. For that matter, the way anyone makes sense of sports is dependent on their knowledge of the game and whether or not they have played it. NASCAR fans literally see a different race than I do; their “text” is denser than mine because the visuals work as cues to a series of scenarios requiring choices by the drivers and pit crews. For the serious sports fan, little may be required in terms of commentary and visually dynamic activity on the screen, because that fan comes already primed. If sports industries want build new fans, though, they must cultivate them, and they must reach beyond their events to attract and maintain them.

One of professional golf’s four major events, the Master’s Tournament at Augusta National Golf Club illustrates golf’s dependence on its players and their stories, and it also shows how the golf industry struggles over the way golf is portrayed. Often caricatured as a symbol of negative characteristics of “the South,” the Masters tournament draws the largest golf television audience of the year. For golf fans, it’s an exceedingly difficult ticket to find: the waiting list for passes to attend the event in Augusta, Georgia closed over thirty years ago. Most of us watch the Master’s on television, and we will forever.

However much the players, the club, sponsors, or other members of the golf industry would like to control the perceptions about Augusta National and its famous tournament, they have never been able to do so. The club goes to great lengths to monitor and manage the rhetoric of tournament coverage, including renegotiating its contract with CBS each year, which gives it a commanding position from which to change its representation. The club manages the language, commercial sponsorship, and the smallest details of production. During broadcasts, announcers must call those attending “patrons” and not “fans” or, as one unfortunate announcer put it, “a mob.” Augusta enforces these rules with an iron fist, forcing CBS to fire Gary McCord, a colorful on-the-course commentator, after he joked that a difficult area of the course was littered with “body bags” and quipped that the greens were so fast they must have been “bikini waxed.” It also limits commercialism: during weekend coverage, the club requires that CBS air only four minutes of ads per hour (the norm is 12) and it has on two occasions, in 2003 and 2004, run commercial-free on the weekend.

Though it enjoys an authoritative position in sports, Augusta has always had its critics, a condition generated by its popularity and visibility in the sports world and the largely negative perceptions of its elite, white, male membership. In 2002, feminist groups garnered a great deal of pre-tournament coverage with a well-executed protest of the club’s all-male membership policy. The campaign did not result in female members at August National, but it succeeded in embarrassing the club, it forced discussions of gender equality, and a few tournament sponsors and some members backed away. Moreover, it stole time from golf stories, such as the one about Tiger Woods, already a two-time champion. Woods is very important to the Masters and the Masters is very important to Woods. The tournament was one of the last to invite or qualify a black player, when Lee Elder qualified in 1975. According to David Owens’ The Making of the Masters, Elder’s qualification, because it came a year before the tournament, sparked a long and intense exploration of race, golf, and the south that required considerable effort by both and Elder club officials to manage. After Elder, and until the late 1990s, however, the only black people you would see at Augusta National, with few exceptions, were the ones carrying the clubs. 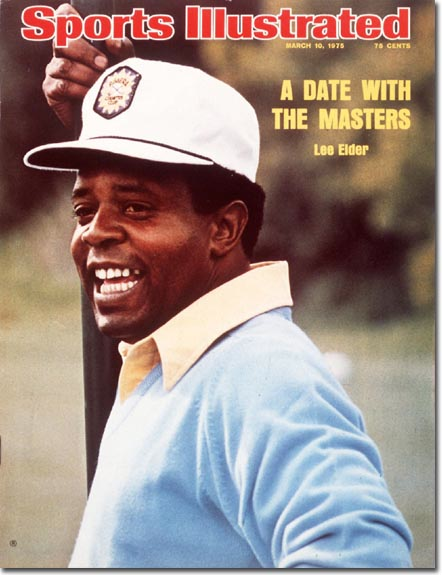 Lee Elder’s qualification generated intense interest in the Masters and of racism in golf.

Just as Augusta celebrated Lee Elder and patted itself on the back for breaking a racial barrier in 1975, Tiger Woods’ arrival as a professional in 1996 was celebrated and promoted as sign that golf was no longer just the bastion of white male elites. In the early years, Woods delivered, giving golf a dynamic, winning player and a symbol of social change all in one package. This was good TV. Over time, people began to say that Tiger Woods transcended race, but what really happened is that his winning enabled the construction of a story and persona that was almost exclusively about golf. For the golf industry and the sports media, his steady accumulation of major tournament victories was the equivalent of the late 90s market bubble—he won so early and so often that all of the hype, product endorsements, and grandiose predictions surrounding him seemed justified. Despite the promotional army at his side, he mostly avoided questions about race relations and social change, almost guaranteeing that the story was always his golf. With each tournament win, with each step closer to owning all the major golf records, Team Tiger molded his image as an e-raced exemplar of hard work, discipline, and competitiveness. Given the force of his gifts and his remarkable ability to earn money for everyone, Tiger Woods more or less shaped his own image, and he really had no critics. It’s important to remember that with the exception of a small shoe line, Nike did not manufacture golf products until Tiger came along. They’re an entrenched player in the golf club, ball, and apparel markets today because of him. Woods had the upper hand and he controlled the narrative. The last time he missed a long stretch of tournaments, TV ratings dropped a whopping 47 percent.

Somewhere in a CBS Sports office in New York, a network official is laughing a wry laugh. Tiger returned to golf at this week’s Master’s Tournament, his first golf appearance since news of his adultery hit the web four months ago. Now the problem for golf TV is not so much that it is boring, the problem is that it’s exciting in all the wrong ways. How will CBS address Woods’ philandering and his stints in unspecified “rehabilitation” programs? Given Augusta National’s traditional insistence on tight lips, we can expect a great deal of discretion from Jim Nance and the other commentators. They will make allusions to Woods’ “off the course problems,” but little more. Talk about an elephant in the room. 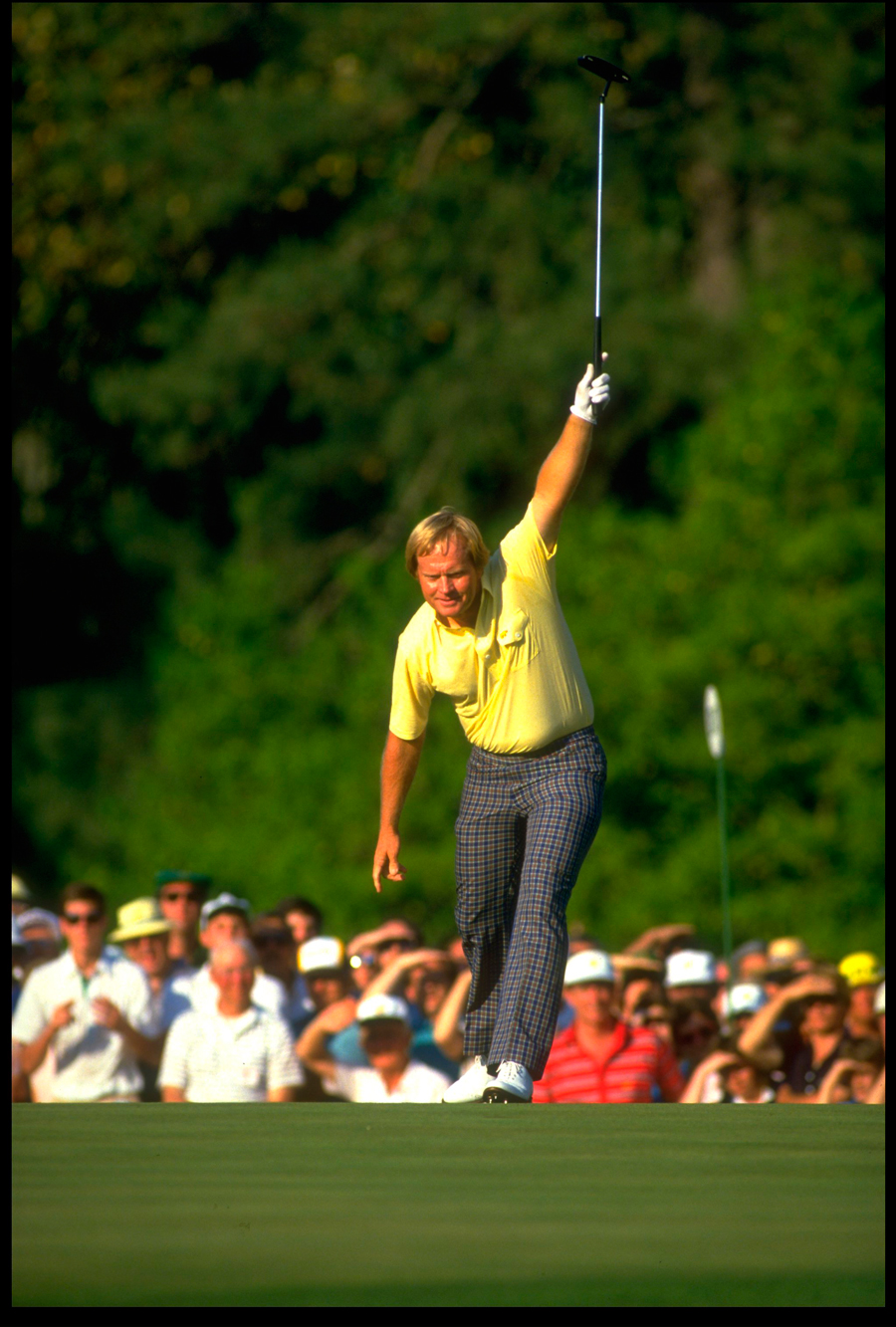 Jack Nicklaus winning at Augusta in 1986.

In terms of which stories are told about Tiger Woods, everything starts over at the Masters. His career will now be framed as pre-and-post sex scandal. Giving short interviews without addressing questions about the scandal is unlikely to stop the questions and the search for stories about his affairs.

Team Tiger would like nothing more than if the story of Tiger Woods is always the one about a golf prodigy who chases and surpasses the record for major golf wins set by Jack Nicklaus. For now, at least, CBS Sports is likely to comply. But in the long term, outside of the small universe of professional golf, the only thing that will prevent scandal coverage is if Tiger wins golf tournaments. Nicklaus won 18 majors, and, so far, Woods has won 14. Before the scandal, Woods was on pace to pass Nicklaus and secure his place as golf’s greatest player. As he returns to golf this week the record takes on new meaning, because if he does not surpass Nicklaus, it will be attributed it to the scandal, and the legacy written will be one neither he nor his benefactors saw coming.

Paul Achter is an associate professor of rhetoric at the University of Richmond. He played on the golf team at Concordia College-Moorhead and earlier at Sauk Centre (MN) High School, where his team won back-to-back state championships.

Image Credits:
1. The challenge for golf is to make the game interesting to newcomers without losing what is distinct about it.
2. Tiger’s fist pumps are legendary, but they are relatively few.
3. Lee Elder’s qualification generated intense interest in the Masters and of racism in golf.
4. Jack Nicklaus winning at Augusta in 1986.