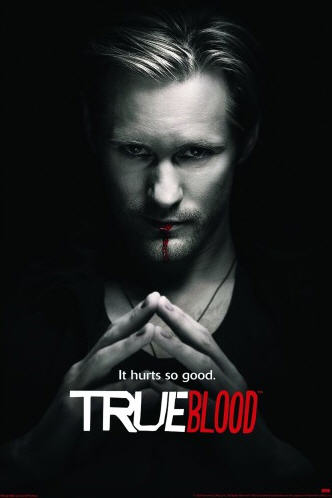 At the end of final season of Buffy the Vampire Slayer, Buffy and the Scoobies are confronted by an invasion of ubervamps. By the completion of the final episode it seems that the ubervamps have been destroyed. In an article from 2005, I argued that the series could be read as an example of white, American anxiety about the influx of non-white migrants to the United States and the foretold consequent population shift that would see whites lose their absolute majority in the country by 2050.1 My main focus in that article was the first season of BtVS. By the series’ end, in 2003, the anxiety I discussed was manifested in the ubervamps — not just ordinary vampires but a race apart, not only from humans but even from those ordinary vampires. The ubervamps were a race of supremely powerful vampires that required the strength not only of Buffy and her friends, but of all the activated Potentials (latent slayers) in order to defend the United States.

In True Blood, vampires have come out of the coffin, to use the series’ own term. They now live among humans and have a recognised position in society; there is a campaign to give them equal rights. At the same time, there is a Christian organisation, the Fellowship of the Sun, which believes that vampires are evil and should be segregated from humans. In a recent FlowTV piece, Lisa Nakamura, Laurie Beth Clark and Michael Peterson argue that True Blood is precisely not about race. ‘Race’, they suggest, ‘has had its day as a concern, the credit sequences depict it as part of an antique and literally crumbling or melting past.’

In this article, I wish to challenge this view. True Blood is obsessively about race—race is front and central. Even the show’s title is redolent of racial preoccupations. In the fifteenth century, as the reconquista rolled across southern Spain, Jews were forced to convert to Christianity. At the same time, those born into Christianity sought ways to permanently identify the Jewish conversos. The Christians succeeded by passing laws that discriminated against the conversos in the terms of limpieza de sangre, usually translated as cleanliness or purity of blood. The Christians were the ones with true blood. These laws are often considered to be the forerunners of modern racial systems. We should, perhaps, not be surprised that this intertwining of race and religion resurfaces at a time when America’s external threat, consolidated in the so-called War on Terrorism, is intimately bound up with religious assumptions. In True Blood, it is the humans who have this pure, clean blood. It is this blood that the vampires really want to ingest.

Historically, the American preoccupation with race has centred on African Americans. Nakamura, Clark and Peterson argue that, in True Blood, ‘race is displaced onto the credit sequences, which lead the viewer to expect extensive engagements with civil rights struggles, racialized violence, and affectively charged engagements between whites and blacks.’ These do not occur. Race in this show is not about the classical American black/white binary.2 Indeed, as I suggested in my article on BtVS, while Americans continue to be preoccupied with black/white relations, white Americans are now focused on the increasing presence in the United States of members of racialised groups that are neither white nor black.3 In this context, blacks are now thought of as members of American society. Indeed, in True Blood, blacks have a place in the everyday, human order. Blacks are not equal to whites, but they are given human status.

In ‘I Won’t Be Seduced by ‘True Blood‘, Joshua Alston, commenting on the first season, rightly points out that the two main black characters, Tara Thornton and her bisexual cousin, Lafayette Reynolds, function as foils to the lives of white folks: ‘[N]either Tara nor Lafayette seems to exist outside of their relationships to the white characters. They are the racial equivalent of the wise, gay sidekick who has plenty of love advice for his female friend, but no apparent love life of his own.’4 In True Blood, this racial positioning is not challenged. Rather, what is important for the show is that Tara and Lafayette are both human.

What, then, of the vampires? As in BtVS, the threat to human, read American, society comes from outside. At this point, African Americans start to be seen as human, American. At the same time, as I have indicated, the debates about the social place of vampires in True Blood take place in a long-established American discourse of rights. There is no single group that we can identify as the easy signification for the vampires in True Blood. Indeed, to complicate matters, the vampires appear to have always had a presence in American history. In a sense, then, these vampires are characteristically Gothic—they can be read, like the supernatural Others in BtVS, as standing in for American anxieties, especially those of white Americans. 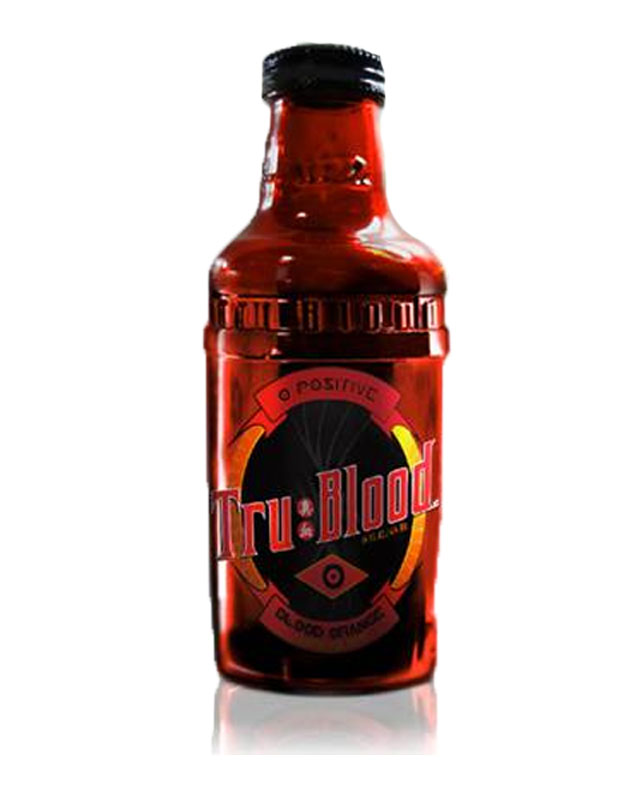 However, there are ways we can begin to think about how this vampire threat might be identified. For one thing, it seems that what has enabled vampires to come out of the coffin is the development of an artificial blood, marketed as Tru:Blood, which means that vampires are no longer dependent on human blood. As the blood was developed in Japan, the overt presence of vampires in American society is immediately associated with ‘Asians.’ Might these godless vampires be an incarnation of a white American anxiety about those whom Americans identify as Asian and non-Christian?5 Certainly there are no Asians among the major characters in the series. At the same time, there is only one Asian vampire. Chow replaces LongShadow as the barperson at the vampire bar in Shreveport called Fangtasia.

Now, interestingly, there was an immense amount of dismay when Chow’s character appeared, as fans felt that he was nowhere near as sexy as the character in Charlaine Harris’ books. For example, on the Fangtasia Forums site, WickedWickedGurl claims that ‘yeah he is supposed to be friggin hot… covered in Yakuza tattoo’s (sic) with long black straight hair…. uh…. .’6 Chow was played by the rather portly Patrick Gallagher. It is as if making Chow sexy and even more obviously Asian might have drawn attention to what is repressed and acted out in True Blood’s vampires. Called Chow, one might expect a Chinese character. After all, ‘chow’ is a racial slur for Chinese.

However, it seems that, as the yakuza tattoos imply, Chow is also Japanese. What we do find out about Chow is that he is a gamer—a practice commonly associated with a Japanese stereotype. Chow is an American amalgamation of ‘Asian’ characteristics. What’s more, LongShadow, who thieved from other vampires, was killed by Bill Compton, the good vampire who is also Sookie’s desire interest. He was played by Raoul Trujillo, and was identified as a Huron native American. LongShadow’s untrustworthiness is a trait associated with native Americans in many traditional Westerns. 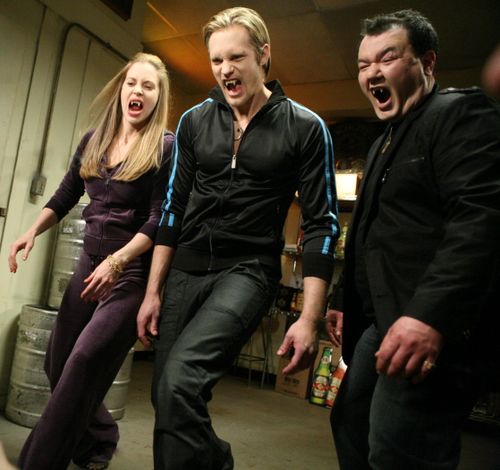 With the examples of Chow and LongShadow, we begin to mark the limits of those acceptable in American society—those considered human. Structurally, the Fangtasia bar can be equated with Merlotte’s, run by Sam Merlotte, the human bar where Sookie, the archetypally American, blonde white, heroine, and Tara and Lafayette work.7 Bars are characteristically thought of as microcosms of the society in which they exist; think, for example, of the way people thought of the bar in Cheers. For an anxious white American society, native Americans and Asians represent two of the most unsettling groups. Native Americans because they are the country’s indigenous people, they have literally always already been here, and Asians because their numbers are rapidly increasing. The numbers of those identified as Asian are forecast to almost double as a percentage of the total American population from 5% to 9% between 2008 and 2050. 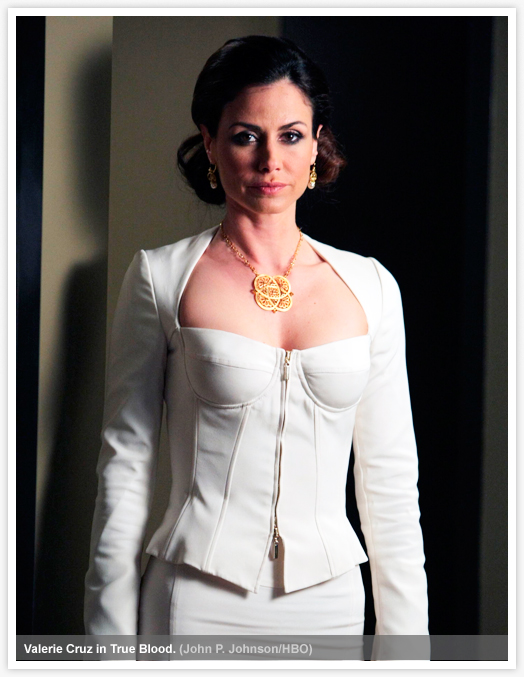 However, the group that white, and perhaps black, Americans are most anxious about are Hispanics. There are, again, no major human Hispanic characters. At the same time, Hispanic vampires are not represented as working in Fangtasia. I would suggest that, in psychoanalytic terms, the anxiety about Hispanics was too great to show one as a vampire. A Hispanic vampire finally appears in the second season of True Blood. Isabel, played by Valerie Cruz, is, Cruz says, 600 years old and, ‘definitely from the time of the Spanish Inquisition.’8 The Spanish Inquisition was established in 1478. It is a suggestive coincidence that Isabel became a vampire at the same time that the proto-racial limpieza de sangre laws were in use. In one interview, Cruz is asked by Lee Hernandez ‘Do you know any Latinos who act like vampires? That is, who come over uninvited, don’t need sleep?’ to which she replies: ‘I’m Cuban, so I know a lot of people who act like vampires. But wait, vampires have to be invited to your house, so maybe they are nothing like Latinos! (Laughs).’9 It seems that Hernandez, and Cruz, both understand the white American equation of vampires and Hispanics that I am arguing pervades True Blood.

Where BtVS presented its heroine attempting to prevent the entry of the threatening ubervamps, non-white and non-black people, to the United States, in True Blood these people, threatening to the established American racial order, are already here in the bodily form of vampires. The question that True Blood asks is what will be the consequences of their presence.