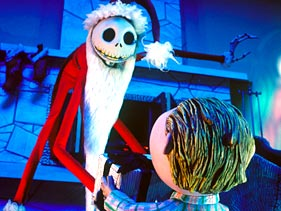 At one point in Meet me in St. Louis on Christmas Eve 1904, Esther Smith (Judy Garland) tries to comfort her younger sister Tootie (Margaret O’Brien). Their family is about to move away from their trusted, friendly hometown to a big, modern metropolis, and the prospect saddens them. Tootie wants to bring all of her dolls (“even the dead ones”). Esther assures Tootie that clinging to small, little things helps, and she sings… ‘Have yourself a merry little Christmas, make the yuletide gay’. In between Esther and Tootie spins around a rather creepy looking music box, and outside we see snow people (which Tootie proceeds to decapitate). The inanimate objects represent the feelings of a family about to be uprooted, and their nostalgic longing for the security of the past.

Another object, differently inanimate. At several points in It’s a Wonderful Life, George Bailey (James Stewart) struggles with an ill-fitted banister at the bottom of the stairs in his house. Capra explains the sight gag thus: “you see how we used it. You can explain the inner feelings of a man through an inanimate object”1. 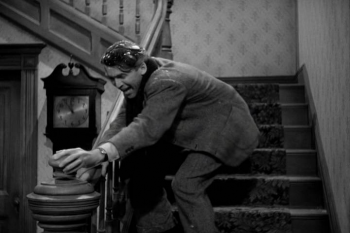 It’s a Wonderful Life and Meet me in St. Louis have become such objects themselves. They are among the most visible Christmas cult classics, and their ritual broadcasts during the yuletide holidays are noted for triggering nostalgia. As cult critic Danny Peary remarks2 : “There is no shame in crying while watching It’s a Wonderful Life, admittedly one of the most sentimental pictures of all time”. Or, as one of the tough inmates of San Quentin put it: “at the climax, I was ready-for-the-river”3. Yet other objects prevail on TV. Meghan Sutherland’s Flow TV essay ‘Being on Television’ observes how characters from a fictional town in a soap opera are presented as a community not by getting together physically, but via the broadcasting of an invented Christmas classic, namely Christina Comes Home for Christmas. A montage of scenes featuring television sets with the movie on – inanimate objects – brightens the lives and/or homes of the characters.

How are these observations more than remarks about the use of props in media, and about the increased place of media objects itself as such props in our lives? Well, I believe they capture the role of classical Hollywood cult cinema (even its fictive re-imaginations) has come to play as a form of inanimate object triggering nostalgia (just like a banister, a doll, or a music box). In doing so, they have reinforced the cult status of beloved oldies from classical Hollywood. As the era of classical Hollywood ended, and network television became the quintessential form of family entertainment, television also became the medium classical Hollywood cults migrated to – films such as Meet Me in St. Louis, Singin’ in the Rain, It’s a Wonderful Life, and Miracle on 34th Street. The major mode through which this transition has been perpetuated is what can best be described as the seasonal cult: the fervent cultism around specific, recurrent periods and dates in the year linked to cultist receptions – and to specialist television programming. The Halloween cult has a special significance for the horror film as a dedicated release date, but also as a slot for horror on television. Valentine’s Day too has, through Casablanca and other films, become a slot with cultist overtones. These modes of exhibition and reception have re-enculturated Hollywood cult classics.

Furthermore, through the connection between classical Hollywood cult cinema and the yuletide season, and in the recurrent adjective ‘little,’ television (that little medium) has unwittingly determined the size and function of that connection4). The avid following for the ritualized viewing of a group of classical Hollywood cults, such as Babes in Toyland (aka March of the Wooden Soldiers), The Wizard of Oz, Meet me in St. Louis, It’s a Wonderful Life, Miracle on 34th Street, The Bishop’s Wife, A Christmas Carol, and White Christmas broadcast on television during the annual end-of-year celebrations – roughly between 20 December and 3 January – has enabled television audiences to create imagined, fabricated, yet real communities; communities who utilize films to construct or reshape shared memories and, hence, nostalgias to confirm their sense of… community. Put differently, there exists now a belief that the films themselves, their initial and long-term receptions, and their continued ritual television broadcasts during a particular time of year construct a sense of tailored nostalgia, a nostalgia both predictable and manageable, yet still real in its emotional authenticity and physically present in its expressions. Almost as if the inanimate objects have acquired some sort of intrinsic meaning. 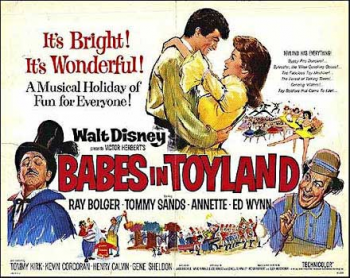 The time of year is right, of course. The festive and repetitive nature of the holiday season with its recurrent parties, gifts, banquets, dinners, and functions; its highly ritualized markings of the passage of time; the interruption of academic and school years for a pause in the rational pursuit of progress and education; the change in the rhythm of economic activity (one of holiday leave for some but increased activity for others, especially performers and hosts); the overall presentation of the period as a time for family, friends and small communities to renew their bonds; the forefronting of traditional and shared values; and the historical religious inspirations of the celebrations (especially with regard to territories whose cultures have been influenced by Christian traditions, with a midnight mass at their core) – all of these imbue this period with an atmosphere within which cultism is likely to flourish.

The films are right too. They provide mild criticisms of capitalist modes of consumption and distribution. New York, as capital of Capital, and modern technology, as the catalyst of capitalist acceleration, get a particularly rough rep in the stories. They share an emphasis on family union, intimate song and dance routines, and naïve beliefs in love and happiness. They are also characterized by the prominent presence of children in the story – It’s Wonderful Life and The Bishop’s Wife even cast the same child actors. More than once, these themes are highlighted through time travel. The invitation to ponder, especially at the time of Christmas, alternative realities, has given many of the receptions of It’s a Wonderful Life a particularly open emotional quality. Above all, these films transcend cynicism (real or perceived) by highlighting maudlin sentiments; feelings of nostalgia for “olden days of yore”, as Esther puts it in ‘Have Yourself a Merry Little Christmas’. In his appreciation of Miracle on 34th Street, Danny Peary describes it thus:

“If a film discussion becomes too serious […] mention Miracle on 34th Street, and watch tense faces soften, eyes water, and smiles form, as if these film combatants just had their childhood teddy bears returned. […] Many of the toughest critics and most jaded film fanatics have a soft spot in their hearts for this picture they fell permanently in love with when they were youngsters themselves. Film history books ignore Miracle on 34th Street and many of us take it for granted […] but it’s vital to a happy Christmas season”5. 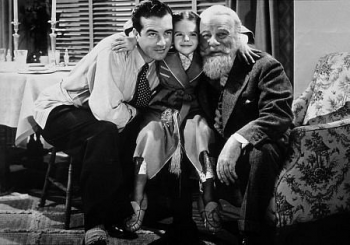 Note how any discerning cultist aspects of Miracle, and its significance for people’s sense of nostalgia, are explained through feelings triggered by an inanimate object (a teddy bear as well as Miracle). At the same time, Miracle, just like It’s a Wonderful Life, (and maybe one day Christina Comes Home for Christmas) is very much alive in its impact on the sentiments of audiences. So much alive, in fact, that much of the success of the musical stage version of It’s a Wonderful Life is owed to the use of elaborate screen projections of the movie.

Dare I suggest that, these days, the feeling of yuletide is – partly – dependent, vital to use Peary’s words, upon the broadcast of It’s a Wonderful Life and its companions6? This adds ambiguity to the status of inanimate-ness of the object in question? In a comment on Sutherland’s essay, Jeffrey Sconce muses that perhaps It’s a Wonderful Life would have been unfit for insertion into a soap opera because the soap opera’s fabula is fictional while It’s a Wonderful Life’s yuletide reception as a film seen to be bringing people together has given the film such a totemic significance it can no longer cross over back into fiction7). Through its place in the yuletide cult it has become too real, and too much of an anchor in how people manage their nostalgia.

That reality, to know you’re watching the same movie together with (simultaneously as) thousands of other people, is as heartfelt and genuine, and it serves as much as a construction for nostalgia and community, as sitting around a burning log. Maybe that particular inanimate object – the yule log video – can become the focus of further discussion on this status?