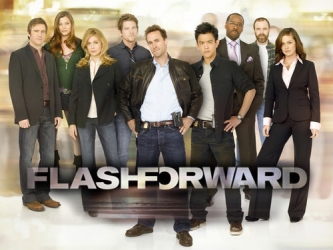 On November 30, 2009, The Hollywood Reporter’s Live Feed blog noted that the yet-to-air tenth episode of the US sci-fi drama FlashForward was already available online via BitTorrent, and apparently nefarious Australians were to blame:1

This week’s episode of FlashForward has leaked online. ABC didn’t air the drama last week because of Thanksgiving. But wouldn’t you know it; Australians don’t care about our guilt-tinged empire-expanding holiday traditions and didn’t take a break. Whether the U.S.-Aussie FlashForward schedule being jolted out of sync will result in future episodes also being leaked isn’t known. (For the record, Aussies do have a Thanksgiving holiday, but it’s in May and they don’t really do it right.)

Immediately, this post highlights some of the oddities about television distribution at the beginning of the second decade in the twenty-first century; despite television promotion and discussion occurring more and more globally via social media, distribution rights are still sold on a national basis. When the Seven Network purchased the Australian rights to FlashForward, they agreed on tight media embargoes before the show aired to ensure the US was the first market to unveil it. Media critics in Australia had to sign confidentiality agreements and could only view the advance premiere episode in a secured cinema,2 but Seven’s contract didn’t specify any break in the initial ten episodes, not even for most turkeys’ least favourite holiday. (Oh, and just to set the record straight, Aussies don’t actually have Thanksgiving in May; we don’t celebrate it at all.)

While the relationship between unauthorized online distribution and broadcast ratings is pretty much impossible to accurately gauge, Robert Seidman in the TV By the Numbers blog took a rather blunt line in his post: ‘If FlashForward’s ratings drop this Thursday, blame the Aussies!’3 That said, in his comments, Seidman’s readers pointed out that FlashForward didn’t take a break in the UK, either, and there are quite a few potential file-sharing Britons, too. That quibble aside, it’s certainly true that in the US the episode was the lowest rated FlashForward to date, dropping almost a million viewers,4 but it’s not at all clear that the availability of the episode via BitTorrent was necessarily to blame as the shows ratings have been falling dramatically ever since its premiere in October. 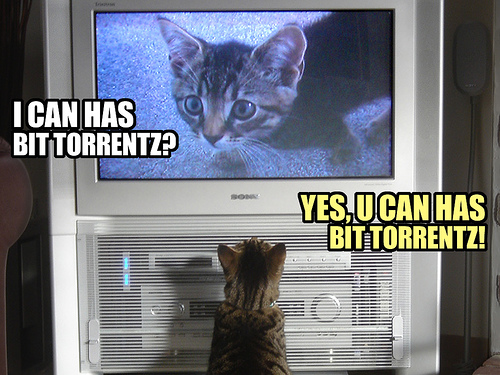 Is the availability of TV shows via BitTorrent to blame for sagging ratings?

Nevertheless, for US viewers, having an episode of an American-produced series turn up on filesharing networks before the broadcast date is an oddity; for viewers in many other countries, peer to peer avenues are increasingly the first port of call for the latest shows. Ironically, one of the reasons international viewers turn to these sources is due to the success of related promotional campaigns. The promotions for FlashForward or V or any number of new shows tends to happen globally – even if not they’re not explicitly targeting non-US viewers, shows get discussed in the media columns of newspapers (all readily available online), on entertainment shows, on media blogs, forums and increasingly across social media such as Facebook and Twitter. Reading live tweets from my friends in the US during the FlashForward premiere was tantalizing, but at least the wait for my turn to view was short since the premiere was broadcast in Australia within a day or two of the US schedule. By contrast, promotions for the V remake were prominent across all sorts of social media and blogs, but the series doesn’t even have a scheduled Aussie release date yet.

Promotions, it should be mentioned, are far from just 30-second teasers and billboards. The inclusion of immersive social media and interactive gaming are becoming a regular part of the promotional arsenal for networks, and these promotional tools are almost always accessible globally, not restricted to a specific country.5 I’ve written before on the frustration of legally viewing webisodes for a series, but not being able to see the episodes they promote (or often those that came before the webisodes) until months after enjoying the online content.6 Digital distance should be an oxymoron – for decades the internet has been hailed as the realm in which distance no longer matters – but the tyranny of digital distance occurs when older political and economic divisions, which were designed in an analog era, when distance really mattered, continue to dictate the rules by which media content are distributed.

The establishment of online ‘catch-up’ viewing via Hulu.com and similar streaming TV services might be seen as a signpost for television distribution moving beyond national boundaries, but these services try very hard to ensure that their streaming content can only be seen inside the US. Even for non-television media, the default Hulu license is for US distribution only, something that fans of Joss Whedon’s Dr. Horrible remember all too well when the global release was, for the first few hours, actually a US-release only.7 Nor is this an exclusively American province: the BBC’s iPlayer and the Australian Broadcasting Corporation’s (our ABC) iView are similarly ‘geo-locked’, scanning the IP addresses of all requests for media streaming, and only allowing those who match the country in question. While the more technologically inclined have found ways to mask their IP, and view these services via proxies, casual viewers searching for TV shows often encounter the maddening ‘We’re sorry, but the clip you selected isn’t available from your location.’ 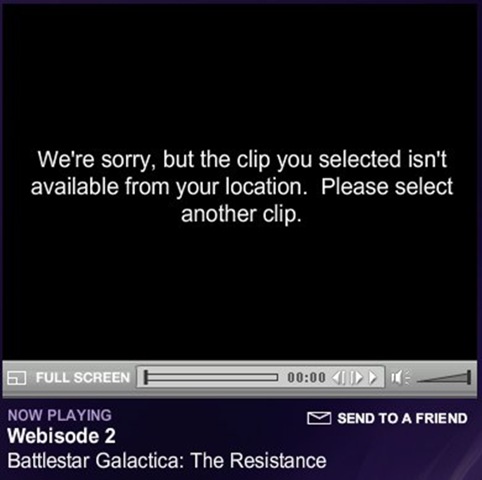 The case is even more pronounced with Apple’s iTunes Store: Apple doesn’t care where you are, or even where your computer is; they only want to know where your money lives. Anyone with a Credit Card with a US mailing address can use that card to purchase items from the US iTunes Store. So, even though FlashForward isn’t available in the Australian iTunes store at all, if I had a US Credit Card, I could still purchase, download and watch the series. So, for Apple, the defining of the boundary as to whether someone can or can’t purchase televisual content is determined by their banking details, not their country of residence or citizenship. In real terms, both iTunes and Hulu see nationality as something determined by bits of information, stored in different and seemingly arbitrary databases.

None of the issues here are new; four years ago Henry Jenkins made the points that ‘few watch television in total silence and isolation. For most of us, television provides fodder for so-called water cooler conversations. And, for a growing number of people, the water cooler has gone digital’.8 Today, the water cooler is Twitter, or Facebook, or Skype, but the key here is that the conversations are global. The promotion of television programmes, the advertising and the hype builds on a global scale attracting fans all over the globe. Telling millions of those fans that there are no legal means to participate in the conversations about their favourite media until hours, days, weeks or sometimes months after the initial broadcasts in the US, the UK, Australia or elsewhere is not something many fans can tolerate.

In FlashForward’s seventh episode, ‘The Gift’, an FBI agent who experienced a traumatic flash forward kills himself, thus proving that the future glimpsed by everyone in the series is not immutable, but instead is malleable and open to change. While the episode seemed poorly timed – why would producers so arbitrarily resolve one of the key dramatic questions of the series so early? – the point that the future is open to change is one media networks and distributors need to remember. Filesharing networks and high-speed broadband connectivity have shown that the technologies required for near-simultaneous media releases, either via broadcast or download, are already available. Promotional campaigns and social media discussions ensure that global markets are primed; the only thing missing is the means for viewers and fans in many countries to legally access their favourite shows. Whether it’s the US-produced FlashForward, the BBC’s Doctor Who or the Australian soapie Neighbours, if distributors don’t have their own flash forward to new distribution models it is likely that more and more of the people formerly know as the audience will see the second decade of the twenty-first century as the time to take distribution into their own hands.