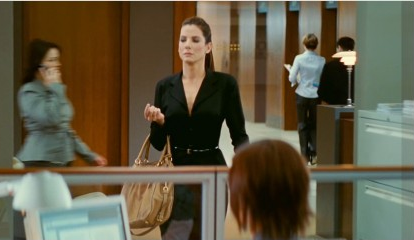 In 2009, journalist Ellie Levenson asserted that “women bosses are… absolute terrors [and] make life hell for their junior colleagues.”1 Popular culture concurred with this seeming truism. By several accounts, romantic comedy The Proposal was one of 2009’s sleeper hits. A return to box-office form for star Sandra Bullock, it also further raised the popular cultural profile of the figure of the female “Boss-zilla” who is terrorizing workplace fictions onscreen. Bullock is publishing executive Margaret Tate, feared and loathed by her cadre of underlings who dart away when she appears, testifying to her inhumanity with panicked IM warnings of her arrival: “It’s coming!” Unsurprisingly for a postfeminist “chick flick” it does not conclude until Tate’s unruliness is curbed, ambition adjusted,2 and she has endured various humiliations through this revenge exercise in “taming the savage boss,”3 magnanimously saving her from a future of abject singlehood and the fate of having “nothing and no one” on her deathbed.

Contemporary conceptualizations of female workplace authority figures have come to be encapsulated by the reductive assignation of the pejorative epithet “Boss-zilla,”4 which (like variations “Momzilla,” “Wifezilla” and the ubiquitous “Bridezilla”) has entered the lexicon postfeminist culture to create a glib verbal shorthand for what is merely a modish way of articulating an old and continually pervasive trope: the interminable “monstrous feminine.”5 Hence texts that feature this figure contain several such over-determined epithets (Tate is also “Satan’s Mistress” and “the witch” while Meryl Streep’s Miranda Priestly in The Devil Wears Prada is both “Dragon Lady” and the eponymous “Devil”), which characterize these female authority figures as cartoonishly monstrous, demonic and/or destructive.

Having characterized the representational backdrop of workplace centred popular culture of early postfeminism, notably in much discussed films like Working Girl and Disclosure, the “diabolical working woman,”6 who is “overloaded with monstrousness”7 has persisted in recent popular culture, latterly returning for a noticeable encore in a group of recent texts like The Proposal, but also tent-pole “chick flick” The Devil Wears Prada,8 (and de facto offshoot The September Issue), and television drama Damages, which have become key cultural touchstones for discourse surrounding the female “Boss-zilla.” Both Prada and Damages have some similarity to their cinematic forebearers from the 80s and 90s, and make inter or intra-textual allusion to extant iconic hate figures of postfeminist culture that have dominated popular cultural conceptualizations of female workplace authority figures: editor-in-chief of US Vogue Anna Wintour and Fatal Attraction’s Alex Forrest. However, a notable development is that each takes the tensions, face-offs and discord in a fraught working relationship between a baby-boomer female boss and her Gen-Y minion as the thematic focal point. “Bosszilla” can thus be understood as one of what Diane Negra calls the “new archetypes of the female labor market”9 in postfeminism: “the middle-aged “bad” female professional whose interests are antithetical to the heroine’s.”10

It is this generational discord upon which I now focus my comments, as it marks an aspect of the evolution of “Boss-zilla” from a player in the aforementioned early postfeminist cautionary tales into an overused archetype, but latterly with a nuanced representational dynamic, accounting for a shifting sociocultural context, specifically the entry of new generations of young professional women in the workforce. Hence the generational multiplicity of postfeminism’s subjects in the represented public sphere, which popular culture has tended to place at loggerheads correspondent to what Negra has described as the “postfeminist propensity for setting women in conflict with each other.”11

Damages centers on fearsome lawyer Patty Hewes (Glenn Close) who, Lucas Hilderbrand notes, “destroy[s] everyone she meets.”12 He highlights the theme song lyrics (“when I am through with you, there won’t be anything left”) as a textual nod towards the destructive monstrosity that characterizes her, which recalls the way soundtrack songs like Ladytron’s “Destroy Everything You Touch” and VHS Or Beta’s “Burn It All Down,” which accompany footage of Anna Wintour at work in The September Issue, similarly over-determine her characterization as monstrously destructive. Patty’s monstrosity is similarly averred both by her bullying office antics, massive mood swings, manipulative machinations and most of all by her attempt to have her young entry level protégée Ellen (Rose Byrne) murdered. Thus, the heart of the tensions that drive the character dynamic and make for the central conceit of Damages is the troubled bitter working relationship between them, that from early in the second season becomes increasingly overtly articulated as a “mother-daughter dyad” of the kind Astrid Henry highlights is “a trope [used] to describe intergenerational conflict” between second and third wave feminists.13

Both Ellen and Prada’s heroine Andy Sachs (Anne Hathaway), an aspiring journalist working as a fashion magazine editor’s assistant, are urged to quit their browbeaten professional lives by their boyfriends (both much more securely professionally settled as a gourmet chef and doctor) but these women are simultaneously drawn by intrigue toward and repelled by fear from their “Boss-zilla,” which also speaks to the configuration of their relationships as maternal/filial via Adrienne Rich’s concept of “matrophobia” wherein “there may be a deep underlying pull towards [the mother], a dread that if one relaxes one’s guard one will identify with her completely.”14 Andy, having transformed into a budding Miranda, avoids this fate, breaking from her by flinging away the cell phone that heretofore bound her to her boss. Events in Damages have seen Ellen morph from a diligent ingenue into Patty’s duplicitous short-tempered mini-me.

Thus they both journey toward a scenario in which the power balance between them and their respective employer is either leveled or reversed from that of the early days of their downtrodden employment under Miranda and Patty, which saw them wither before “Boss-zilla” in response to severe words and curt dismissals from which they slunk away humiliated, in a walk of shame from an expansive forbidding executive office. Redressing this imbalance through their respective moral and psychological victories, Andy and Ellen’s stories seem to stand as cultural manifestations of what Angela McRobbie calls “post-feminism as daughter’s revenge”15 upon their formidable “Boss-zillas” whose professional identities have made them monsters.