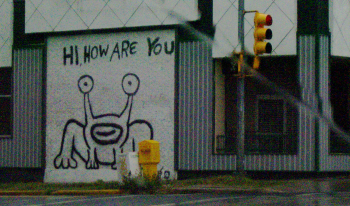 A Daniel Johnston “Hi How Are You?” on a street corner in Austin, TX

A short two months ago, my iPod Touch device was in disuse, and I never expected to play a video game again. Things changed with the release of Hi, How Are You, an iPhone application based on the work of Daniel Johnston, a cult artist who hit the Austin, Texas music scene in the 1980s and still tours, supported by family members who sell his drawings for up to $2,500 a pop. I had not saved anyone onscreen since Princess Toadstool in the original Super Mario Brothers, but suddenly I was back trafficking in digital damsels, intent on passing all twenty-six levels in order to liberate Johnston’s true love from the devil. The game is not a faithful translation of the artist’s repertoire, given its traditional guy-rescues-girl plot, but this archaic convention unexpectedly complements important themes in Johnston’s songs and drawings, including the sexual politics of courtship and hopeless devotion.

Johnston recounts his history with the “Hi, How Are You” phrase in “Grievances,” a song in which the protagonist learns that most people consider passion a distraction and commits himself to pursuing love even though he knows he may never be with the person he wants most. As the story goes, Johnston fell for a woman named Laurie in art school. She soon married a mortician-in-training, and Johnston saw her hanging up coats at her husband’s father’s funeral parlor while attending a service. He recalls, “As I walked in, I said, ‘Hi, How are you?’ and I shook her hand. I looked behind her and there was an empty casket and I just thought, ‘Well, I’m just gonna crawl in there.’” As he sings in “Grievances,” “I saw you at the funeral / You were standing there like a temple / I said “Hi, how are you, hello” / And I pulled up a casket and crawled in.” Johnston ended up staying there, and singing about Laurie in “a thousand songs,” as he put it, or for “a thousand years,” according to one lyric. As an interviewee in Jeff Feuerzeig’s 2005 documentary The Devil and Daniel Johnston said, “he really liked that event even though it causes him great pain.”

Johnston’s voice continues to emanate from the place of “Grievances’” punch line and is chronically misunderstood, mostly because of critics’ hang-ups about his bipolar diagnosis.1 Fixating on archetypes of good and evil and true love, fans and reporters overlook Johnston’s interest in “impossible love” (as one song is called) and his self-reflexivity about what it means muse on love as a man presumed mentally unstable. Importantly, Johnston believes that “true love will find you in the end,” rather than the other way around, and he has long been aware that intense affection creeps women out. Instead of a knight in shinning armor he is a proud pest, a shameless, inescapably morbid, and highly self-conscious romantic who pursues love in the present by processing how he lost it in the past.

Hi, How Are You creators Steve Broumley and Peter Franco eschew this complexity, cutting the darker elements from upbeat songs to construct a happy-go-lucky soundtrack. A video game requires high-energy music and an adventure with enemies, assistants, and someone to save. Like many critics preoccupied with platitudes about unrequited love when it comes to Johnston’s work, Broumley and Franco rewrite his requiem as a “quest for true love.”2 This narrative fits video game conventions, as well as unspoken understandings of the artist as a doped-up would-be stalker. According to one reviewer, Johnston’s work “is still rooted in the adolescent male fantasies that have populated gaming for years.”3 From this point of view, Johnston’s drawings are the “perfect fodder” for an video game not because they complicate the damsel in distress story, but because its lopsided set-up makes the question of unwanted advances seem moot. As GamesRadar critic Shane Patterson explains, some players equate a rescue plot with sexual consent, seeing a girl character’s onscreen presence as a promise that she “will screw [his] brains out” when he wins.4 Similarly, in Hi, How Are You, saving Laurie constitutes a happy ending rather than an action potentially warranting a restraining order. 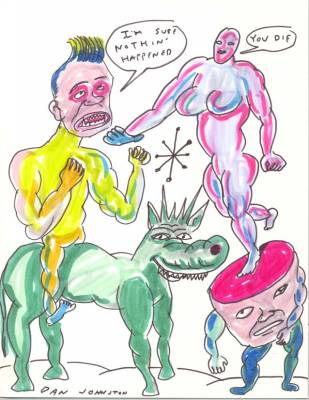 One of Daniel Johnston’s drawings

While the game egregiously misrepresents ideas about love in Johnston’s work, his humorous and direct sensibility shines through, not least because players gain access to original art by completing tasks. When you push every block in a level over the edge, for example, you unlock “Love is Real,” a picture of a dazed figure saying, “Whatever it’s really cool and like wow you know what I mean.” Irony frames Johnston’s depictions of his desires in many of these drawings, given that his commentary on love both affirms his devotion to Laurie and doubles as a response to listeners who dismiss his emotional spectacle as the “endearingly naïve” psychotic symptoms of a “man-child.”5 In actuality, the artist’s exploration of the ethical questions raised by a permanent crush and his multi-layered awareness of how ambiguities in sexual pursuit are exacerbated by conventional gender roles and hetero norms set him apart from better paid pop stars who sing about imaginary relationships with women they barely know. (The song “Devinare,” for example, briefly riffs on the quintessential love-as-surveillance song, “Every Breath You Take,” by The Police.)

Johnston’s departure from the traditional unrequited love narrative is evident in the queer temporality of his work. When he sings, “We were in love forever,” for example, he is not describing a moment in time when two people felt as if they would always be in love, but instead a personal sense that experiencing love for someone—no matter how long ago—actually constitutes being in love with them forever, both in that moment and beyond. Likewise, Johnston flouts social prescriptions to “move on” in the song “Thrill,” attributing a present liveness to the effects of falling in love in the past (She was the one I chose / At very first sight”) and of having committed himself to processing that love (“Oh what a dream it was / A realistic dream”), singing “You are everything I ever imagined so far.” This outlook resonates throughout the game, in mundane elements like losing lives. Johnston clearly plans to die in the throes of a decades-old, one-sided love affair, and his avatar’s tendency to get killed during play recalls song lyrics and drawings about death (“I’m already dead and I already died”; “There’s Nothing Like Life After Death”) that relate to his vision of love. You “die” in most video games, but the mechanics of re-materializing with as many new lives as you need takes on odd significance here. After completing the “Time Bandit” achievement, for example, one of Johnston’s more morose figures commands, “Die 3 times,” which is inevitably a low figure.

By that point, the heroine caged in flames appears less like a prize than an image of love as a “cool” and “dangerous” “nuisance”—thoughts voiced in the game’s art library. In one piece, titled “Let Love Live Try to Love Again,” a woman tells a figure down on one knee, “Leave me alone.” While it is hardly apparent in the world of Hi, How Are You, Johnston generally recognizes women’s ability to say what they want, if only by dwelling on his own rejection. In the game, Laurie is presented as a standard reward for completing a mission, but more complex ideas about loyalty and seduction resonate throughout. Pulling up speech bubbles with slogans like “Love is dirt and worms love it” on your iPhone continues to draw out ironies from Johnston’s funeral lore, so much so that when a bright red heart encircles your avatar and his “princess” in the game’s final vignette, Johnston’s promise that “true love will find you in the end” may seem downright chivalrous.