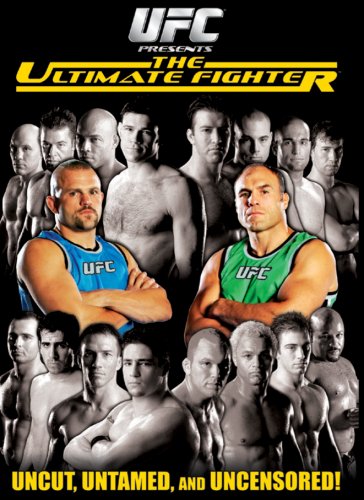 The ever-expanding cultural visibility of MMA (mixed martial arts) is by many accounts directly tied to the resounding success of the UFC’s popular reality show, The Ultimate Fighter (TUF). Season one (2005) established some of the company’s most popular fighters (most significantly Forest Griffin), but also laid the groundwork for the organizing narrative structures that now define the promotion. With the UFC’s growing popularity, MMA has shed most of its old “human cockfighting” baggage. The new user-friendly version is largely the result of three changes: more rules and regulations (i.e. its not “no-holds-barred” anymore); a shift in emphasis to professional standards of athleticism in terms of training and technique; and lastly, a personality-based promotion of fights. Related to this last point, more than any other current sport commodity culture, and for obvious reasons, MMA media has availed itself of the romantic discourses of combat –athletes with the warrior’s “spirit” or “heart,” the animal of prey, the “gentleman and the beast.” 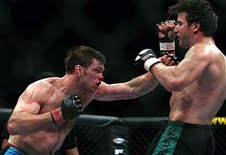 The most mythologized fight, Griffin vs. Bonnar, an ideal MMA narrative

Despite its status as now just another regulated “modern” sport of skill with its own specificity of physical refinement, MMA still remains more open than other sports to the intersecting figures of the ancient and modern, primitive and civilized, rational and irrational, knowable and unknowable. While it is important when dealing with any contemporary sport media to keep the “ancient” in view (both in the historical and psychological sense) it is arguably more urgent in the “arena” of MMA. This has much to do with the sport –and its highly successful commodification– being rooted in a libidinal economy of desire associated with combat as a “test” or space for discovering the “authentic” self through pain and pleasure. These dramas are writ large in The Ultimate Fighter reality show and the promotional narratives that accompany UFC events. In this column I want to propose reading MMA events as narratives, and in particular how narrative “excess” in the form of descriptive “pauses” reveal some of their key psychodynamics.2 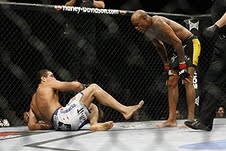 The fight itself is only ever one part of the story. MMA as a sport can thank the UFC’s imperative to make fights personal (often when they’re not) for its success. But the fan is eager for identification with the fighter’s character and the plight of their ensuing “war.” In the lead up to a fight, there is the “war of words” between fighters, and when the social actors don’t (or won’t) play into this storyline, there is always some other motivation to fight –to support a family, to avenge a loss, to test oneself as a man, and occasionally, just for the love of competition (and presumably the pain involved, both giving and receiving). Or, a fighter is friends with their opponent, respects them, but hey, this is business, and when they get in the cage “the friendship is over.” But in many cases it is simply about “shutting someone’s mouth.”

This represents the opening act with the introduction of characters and the staging of some conflict, with the fight itself as the climax. But the resolution is usually more ambiguous (and contingent upon that climax). The success of the climax –unlike the carefully orchestrated pyrotechnics of an action film– will depend in the end on the experience and competency of the viewer, but in most cases the MMA viewer’s desire is to see as much give and take of punishment as possible. The plot moves forward when mutual punishment is consummated. The plot stalls when fighters do not “advance their position” or keep “working,” as the referee often reminds them during these “pauses” in story-time. It is in these moments when punishment is not consummated that I find some of the most interesting evidence of narrative “excess” in MMA. There is no cutting to commercial during those five-minute rounds, and plot steadily advances as mutual punishment is consummated, though when not, it is a strangely protracted, and, dare I say, “queer” affair. Especially for the uninitiated, the strategic intricacies and jockeying of the “ground game” and “grappling” might also appear to be forms of narrative “lingering,” favoring visual “description” over plotting. It is especially at these times –when punishment is not achieved– that a form of homosocial merging of bodies instantiates as excess to the predominant heterosocial narrative of penetration (or punching through). This is when the booing begins. But it never lasts too long as there are textual strategies in place to right the ship. Like the referee who sets them back on a course to “finish” each other, or the ring girl, necessarily present yet fragmented iconography securing the ritual combat as a heteronormative affair.

Perhaps the most mythologized fight of the past ten years is the Griffin-Bonnar fight at the end of TUF season one (2005). MMA commentator Mike Sloan asserts that: “When it is all said and done, everybody involved within the sport of mixed martial arts could very well be kissing the feet of Forrest Griffin and Stephan Bonnar for eternity. Those two mighty warriors displayed everything a true fighter is all about: courage, determination, heart, resilience, skill and passion.”3  If you watch only one MMA fight in your life, make it this one, and you’ll witness the establishment of this narrative ideal. Griffin’s success in MMA has surely to do in part with his skill and athleticism, and especially with his candid and jocular charisma, but his readiness to take punishment and still persist is his defining trait in these MMA stories. Although most fights are counter-narratives to this exemplar, with the fan left waiting for that slugfest most resembling a street fight. Anderson Silva versus Thales Leites, contrary to MMA’s narrative ideal, saw the mutual respect for two styles utterly unwilling to reconcile with each other (2009). The result was a bizarre scene where the Jujitsu artist, Leites, lay on the ground waiting for Silva to enter his “guard,” while Silva the kick boxer remained standing, waiting for Leites to get up and “trade” with him.

According to Kristin Thompson narrative excess begins “where (narrative) motivation fails.” 4 More precisely though, narrative justifies any number of “devices,” but those devices may manifest
themselves variously by quantity, quality, and duration that exhaust or extend beyond the fulfilling of their narrative purpose. In generic terms, this translates to the minimal and the maximal: one more clever and gratuitous zombie killing in the horror film; one too many displays of clichéd sentiment in the romantic comedy; another random mansion exploding in a Jerry Bruckheimer film; or, another punch that doesn’t quite finish off our action hero. In MMA, the narrative excess lies at both ends of the spectrum. In the Griffin-Bonnar fight, they stay on their feet, however improbably, going well beyond the pugilistic standards of what satisfies a fight fan. In the Silva-Leites fight, nobody “finishes,” they avoid each other’s stylistic spaces altogether, one passing the time standing while the other lays down. Curiously enough, the Silva-Leites fight was a more tactical “battle,” and for the MMA literati, a fascinating moment where two fighters’ respect for their opponent’s skill trumped the popular promotion’s doctrine of explosive combat over cautious restraint. The more conventional narrative trajectory would have a smaller measure of both plotlines. 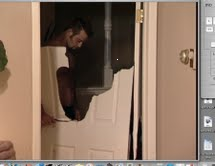 The wilderness of the TUF house

In these moments where action (or story-time) pauses while narrative discourse (duration) continues, other things, “deeper” things, become more salient. And it is also worth noting that, while Thompson’s notion of narrative excess relates to the cinema, in the fetishistic re-play imaginary of sports media, excess is elevated to another level (equatable to something like John Woo’s slow-motion balletics of violence). This excess in re-play exists on the rhetorical, or “official,” level (undertaken by commentators and fans online) as a re-appreciation of virtuoso technique, physical prowess, and unpredictable narrative events that accompany the unscripted. However, on another level these re-plays and “pauses” are pleasurable “flirtations with excess” that relate to displaced aggression, a desire to conjure virility, and, as Toby Miller puts it, a space to “watch and dissect other men’s bodies in fetishistic detail.5 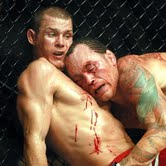 Bisbing vs. Leben, the “narrative never exhausts the image…”

On still another level, MMA combat and the personality-based promotion of fights returns an ancient “ethics of the self” which combines both “austerity and hedonism,” where the dual, the match, or the battle between individuals is a space for exploring our relationships to desire and pleasure, and our ability to govern these precarious boundaries. 6 The ability to govern the boundaries of desire is one of the organizing narrative impulses of The Ultimate Fighter reality show. While the cage is surprisingly the space of order, rules and regulation (cosmos) where fighters can properly negotiate these boundaries, their cloistering in a house away from family and friends is a symbolic wilderness (chaos) in which, nearly every season, tensions between fighters –confined to a space where fighting is prohibited– end up damaging that symbolic container of desire. Symbolic penetration ensues. Doors are kicked in, walls punched through, and beds pissed on, the first act which establishes compelling conflicts leading to climax in the cage. Resolution, though, is at your own discretion.

1. The Ultimate Fighter reality show
2. The most mythologized fight, Griffin vs. Bonnar, an ideal MMA narrative
3. Silva vs. Leites, two styles unwilling to reconcile, narrative pause
4. The wilderness of the TUF house
5. Bisbing vs. Leben, the “narrative never exhausts the image…”