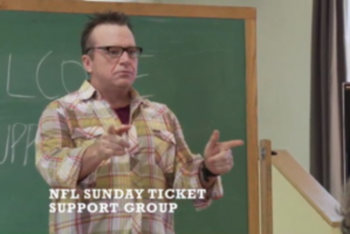 DirecTV’s recent marketing campaigns for its NFL Sunday Ticket speak to the importance of cultural geography for sports fans and also raise problematic assumptions about the idea of home in a late capitalist economy. The NFL Sunday Ticket costs approximately $250, for which viewers receive televised feeds of all 13 or 14 NFL football games aired on Fox and CBS at 1pm and 4pm EST on Sundays. Subscribing to cable would allow viewers to watch only 3 of these games. The package is popular with fans in fantasy football leagues who want to watch as many games as possible to keep track of stats, but more intriguing to me is the way DirecTV is marketing to displaced fans—people who have elected or have been forced to move from their hometowns and need to subscribe to the NFL Sunday Ticket to watch their former hometown football teams play out of market. This year DirecTV ran two campaigns for displaced fans. The first, The Ultimate Displaced Fan Contest, strengthens brand loyalty with current subscribers. DirecTV invites these viewers to submit videos and essays to ultimatedisplacedfan.com about why they are the most loyal displaced fans in America, and the first-place prize is a trip to the Super Bowl and an opportunity to spend time with the fan’s favorite player. When DirecTV subscribers go to ultimatedisplacedfan.com, they encounter award-winning videos from last year where fans talk about the ways they use DirecTV’s service to negotiate geographic notions of home. The second campaign attracts new viewers with a series of commercials where actor Tom Arnold leads a self-help group of football viewers suffering from Displaced Fan Syndrome.

In the award-winning videos posted on ultimatedisplacedfan.com, fans speak about how DirecTV’s NFL Sunday Ticket does not simply depict home identities on screen (i.e., the team of the former hometown symbolizes home) but is part of a larger performance of home identities in a space that is somewhere between their current and former residence. As an example, watch the following video from Alaska resident and Carolina Panthers fan Joseph Cooper.
[youtube]http://www.youtube.com/watch?v=W0YpZh0Ixcc[/youtube]

Cooper does not talk exclusively about watching the games on DirecTV. He discusses in detail traveling to watch games and how DirecTV is part of those travels. Notice how he begins with his 25-minute drive to a bar with the NFL Sunday Ticket when he first moved to Alaska from North Carolina. Even though Cooper would later subscribe to DirecTV in his house, he spends much of his remaining time documenting his once-a-year trips to North Carolina to watch a game at the stadium. He recounts his itineraries traveling to the games in more detail than what happens in the games themselves. Cooper performs his home identities in travels either to watch the Carolina Panthers on DirecTV or in travels to North Carolina that mark a break from his weekly rhythms of viewing football on DirecTV.

Cooper displays what John Durham Peters would call a diasporic identity. Peters claims that diaspora mediates between two conflicting notions of home. The first is exile, a person’s painful displacement from a homeland that stands as source of primordial identity. The second is nomadism. Here there is no fixed home. Home goes with a person on the move.1 Cooper’s descriptions of traveling to see games at bars or in North Carolina present home on the go, constituted by the act of movement, and home as a site of origin, as all of the travels help Cooper reconnect with the idea of North Carolina defining a major part of his identity.

All of the displaced fan videos discuss home as existing in a third space, which furthers a sense of diasporic identity in the fans. Sports cultural geographer John Bale uses the term “third space” to theorize spectating areas that operate with fewer restrictions than 1) the stadium, which polices behavior by assigning seats, monitoring alcohol consumption, and regulating fan activities, and 2) the home, which calls upon fans to follow codes of domesticity.2 As an example, watch the first-place video from Ron Lawrence, a displaced Dallas Cowboys fan who lives in Northern Virginia.
[youtube]http://www.youtube.com/watch?v=X6-Z0_fNDPQ[/youtube]

I find it fascinating that he constructs this space, which is part Texas Stadium, part Hall of Fame, part home theater, part bar, part memorabilia collection, outside of his home in the garage. The space is cut off from the flow of daily life where his family could get mad at him for not following the rules of domestic design. As a result, Lawrence creates a space that is part of his house yet apart from his house, part of Texas Stadium yet not Texas Stadium. In other words, this third space mediates notions of home in Texas and Virginia.

As a displaced Pittsburgh Steelers fan myself, I have a soft spot for these fans and their struggles to define home. I have similar stories because I have moved across the country for school and academic jobs. But these personalized discourses of home among displaced sports fans have concerned me for some time. These discourses extend beyond the fan videos posted on ultimatedisplacedfan.com. I wrote about them in an ethnography of a Pittsburgh Steelers fan club in Fort Worth, Texas.3 There is a turn to nostalgia in displaced sports fans where they romantically look to former homes. But instead of interrogating the larger socioeconomic conditions that make regional relocation part of American life, fans talk in personalized terms of their own dedication to their former hometown sports teams. In other words, fans often focus on the solution to relocation—sports help negotiate difficult moves—rather than the problem-causing relocation—late capitalism, gentrification, deindustrialization, the out-of-control housing markets on the coasts, etc. Frustrating notions of home become personal problems to solve, not social problems to fight.

DirecTV’s commercials with Tom Arnold for the NFL Sunday Ticket further demonstrate the way American culture erases larger socioeconomic conditions of regional displacement and personalize diasporic constructs of home in America. One poignant ad has Arnold talking with a frustrated Eagles fan who was forced to relocate to LA and who worries about being able to watch Eagles games out-of-market on the west coast.
[youtube]http://www.youtube.com/watch?v=oM52wnA5rrw[/youtube]

The commercial spends no time interrogating why the economy forces the Eagles fan to move. Instead, the ad personalizes dislocation by making it a psychological, not a social, condition. Displacement becomes a fan’s own personal syndrome. The support group setting further establishes relocation as a personal problem that you must manage—both through counseling and through DirecTV subscriptions.

In today’s late capitalist economy, cultural geography remains an important lens for viewing sports fans’ practices. As more and more people are forced or choose to relocate to other regions of the country for jobs, they will construct spaces that help negotiate ideas of home as they watch their former hometown teams. Media studies will be well served by continued investigations and theorizations of these spaces. I just hope that fan discourses in these spaces shift to become more critical of the socioeconomic conditions creating regional dislocations.