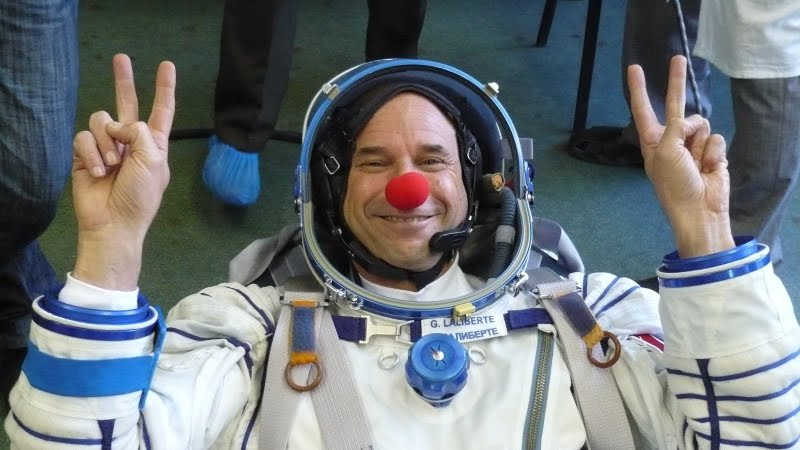 Laliberte on his “poetic social mission in space”

On October 11, 2009, Guy Laliberté, professional clown and founder of Cirque de Soleil, returned, weak but happy, from a 12-day trip to the international space station in orbit around Earth. Laliberté had paid $35 million to the company Space Adventures for the opportunity to be a tourist aboard the station. While in space, Laliberté had helped to produce a global media event, broadcast live on Radio-Canada, the French language service of Canadian Broadcasting Corporation (CBC), and streamed on-line through the website Onedrop.org. The goal of the two hour show, entitled “Moving Stars and Earth for Water,” was to raise awareness about the fragility of the global eco-system, particularly the precarious state of the world’s fresh water, and especially to draw attention to the plight of the world’s poor for whom unclean water can be the source of disease and premature death. The show, called by Laliberté a “poetic social mission in space,” is a fascinating confluence of edutainment, celebrity philanthropy, popular environmentalism, post-cold war neo-liberal politics, and what used to be considered the media event.

In 1992, Daniel Dayan and Elihu Katz identified the festive viewing occasions of live events on television, which they termed media events. They saw these moments when people gathered around the set to watch sanctioned, planned events of national and international significance taking place in real time as emblematic of the kind of global stage television alone was capable of producing. Audiences approaching a billion people could gather virtually to watch the moon landing, state weddings and funerals, the activities of dignitaries, even certain sporting events, and in these moments experience their place in an “imagined community” in the “live broadcasting of history.” Perhaps Dayan and Katz were considering these moments in the early 1990s precisely because they were coming to an end. Already by that time, the limited spectrum of postwar television was being replaced by cable and digital bandwidth expansion.

For many reasons, technological, economic and political, today media events are few and far between. Broadcasting’s unprecedented audiences have been displaced by the archival ethos of the Internet. People don’t need to gather together physically when they can watch from work computers and mobile screens, as they did, for instance, during the Michael Jackson funeral. Broadcasters are less likely to share feeds today and, even during big events, dozens of other television channels continue to stick to their own programming. The mass audience imagined—and worried about—by postwar political and media theorists has well and truly been replaced by a multiplicity of publics using a variety of non-broadcast media. 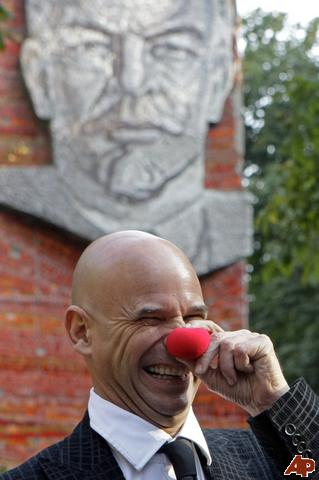 In this context, Laliberté’s project is all the more surprising. The two hour show, apparently mixed live on October 9 from a variety of elements, including feed from the space station, illustrated lectures by Al Gore and David Suzuki, public service announcements, music videos, and the performances of singers and dancers in 14 cities, including Montreal, Moscow, Marrakesh, Rio de Janeiro, Osaka and Johannesburg, in many ways simulated the simultaneity and global reach of television. However, its narrator, a successful and wealthy entrepreneur—albeit with a red clown nose—is a far cry from the state broadcaster voices of media events past. In the new media event, as in much contemporary global activism that is covered by the media, wealth and celebrity status are the requisite elements of entitlement. The confluence of entertainment, wealth and political voice is perhaps best exemplified by Bono, who has made it a mission in recent years to exert a messianic personal pressure on politicians to affect national policies. Bono and U2 figure prominently in the One Drop video, being the only group given a direct video link-up to Laliberté. Laliberté’s message is seamlessly incorporated into a huge stadium show U2 gave on October 9 in Tampa. The anodyne message about clean water is encapsulated in Bono’s unwitting parody of a TV interviewer’s question to Laliberté: “How does our little planet look, Guy?” And Laliberté’s political message dissolves into some playful grasping at his red clown nose as it floats around his head in zero gravity.

Chumminess between global celebrities is evoked from the outset, when Al Gore introduces David Suzuki as a “mutual friend.” Of course the piece also works as a piece of eco-branding for Cirque de Soleil, the troupe that made Laliberté rich. Their presence as a fixture in Las Vegas and a global touring phenomenon gives a clue to Laliberté’s perspective. In one Cirque number featured in the video, acrobats in an array of international—or multicultural—traditional costumes gather together to contribute to a First Nations rain dance. This is the prerogative of a “poetic social mission,” no doubt, but it does make for a confusing political message. Who, exactly, would not be supportive of Laliberté’s drive to clean up the world’s water? How has industrial capital worked against the very people Laliberté is now mobilizing in his quest for a reconstituted natural purity? What is to be done? 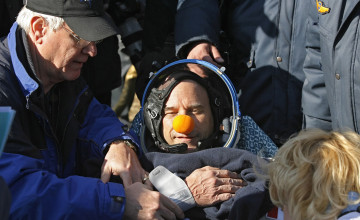 Laliberte upon his return

The neo-liberal project operates through the self-responsibilization of the subject. The celebrity activist is a version of this individualism writ large. As someone who has benefited disproportionately, they must be seen to give back disproportionately. Their individual success gives them a special status in a society predicated on that myth. But in so doing they obscure modes of response available to the less financially endowed. Each drop creates a ripple, is the manifest political message of the event. But a $35 million drop that falls from space clearly creates the largest one. In this context the participation of the French wing of CBC is clearly significant. For despite this celebration of home-grown global arts entrepreneurialism, Radio-Canada is still a public broadcaster with a public mandate. Aside from the multiple appearances of Cirque (in Montreal, Las Vegas and Moscow), the script is threaded together by a story from the award-winning Canadian author of Life of Pi, Yann Martel, and was partly supported by the Canadian Space Agency.

Martel’s story takes the form of a creation fable in which the characters are the Sun and the Moon. However, unlike in traditional myths of origin, the Sun and the Moon in this version are disputing the causes and solutions for pollution and climate change. Sections of the story are read by Martel, as well as a chorus of other readers from around the world in a variety of languages, including Shakira, Bindi Irwin, Touria Ikbal, Matthew McConaughey, Gilberto Gil, Julie Payette, and Salma Heyek. The circulation and performance of this story is revealing. The story draws upon a generic version of a traditional creation myth. The genre is reworked by a contemporary Canadian writer. His words are then put into the mouths of people of a number of cultural backgrounds and spoken in an array of languages, rendering it a global myth of cosmic response to inadequate human care of the earth. As in all mythic languages, as this one transcends place and time, it also moves away from history and messy world geo-politics, the very things that might make our current situation legible and give members of the viewing audience real guidance about political action. Its cosmic bodies are both anthropomorphized and decontextualized, little surprise in a piece sponsored by four space agencies (Canadian, European, Russian and American) and one space travel agency, Space Adventures. In a post-space race space era, space tourism makes as much sense as the scientific experiments the astronauts are carrying out to develop water- harnessing technologies such as urine recycling for a contaminated world.

Over 80 years ago Siegfried Kracauer suggested that we may learn more about our era from its “surface-level expressions” than from its stated claims about itself. Our corporate media sphere, news and entertainment alike, is characterized by claims about the importance of environmentalism. (The One Drop website offers observations about the dire straits of a billion people in our world and asks us to join their cause by subscribing to their feed.) But our “frivolous” entertainments, of which Cirque de Soleil is of course one, tell a story of the mass ornament not unlike the one Busby Berkeley style musicals told to Kracauer (referenced directly in this broadcast by the musical number performed by the Russian child dancers). And the message is this: we are members of a vast global audience. Politicians do not represent us (the only one who appears is Al Gore, now retired); activists and other citizens of the world have no platform of their own. Only as bodies orchestrated into spectacle and spectator may the voiceless millions be given a vision of themselves. The global Cirque de Soleil has enlivened an ancient popular form and, wittingly or not, turned media event into media circus.