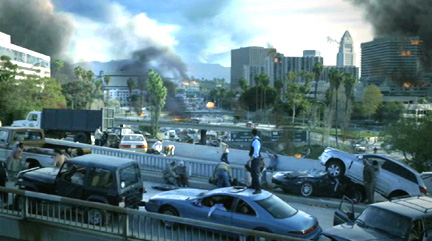 FlashForward’s premise, established in the first episode, is that (almost) everyone on earth simultaneously falls unconscious and vividly experiences a little more than two seconds of their future, six months from the blackout event. Millions die from accidents that occur at the time of mass blackouts. The usefulness of this conceit for scripting is clear; it sets up a timeline and a climax from the very beginning. In this it is like many “classic” Hollywood plots. Such a conceit intrigues me because I’ve taught screenwriting, enjoy reading science fiction, and like to watch police procedurals on television. Also, this is the first TV series to send me to the Internet to catch up on unseen episodes. I started the series with Episode 3, in which Dr. Olivia Benford almost kills a patient in surgery because she won’t heed a colleague’s diagnosis based on the patient’s flash forward [henceforth, ff]. Olivia does not want to conduct surgery based on a fantasy but rather would act professionally as a rational pragmatist. After I saw the first two episodes I understood that emotionally she has a reason to reject the ff’s predictive power because hers foretells an affair and the end of her marriage, so I re-saw the episode with new insight. Currently, I am following the series to see if its clever scripting will continue to hold my interest as much as it has up to now.

Now that I caught up on past episodes and have the rest of the season programmed in my TIVO, what intrigues me is the scripting, its retardations, delays, and doling out of incomplete information. Since one storyline involves a police procedural and detective investigation, I also enjoy the occasional action sequence and the moments where spectacle enhances plot. In the detective plotline, a local FBI unit has made a web site to collect and analyze ff’s so as to use pattern recognition to analyze the future, find the perpetrators, and prevent other occurrences of such events. The show clearly aims to capitalize on the popularity of shows that successfully use alternative realities, such as Lost and Heroes, but also incorporates the ever-popular detective-genre investigative script so that it has more social verisimilitude than these other programs do. 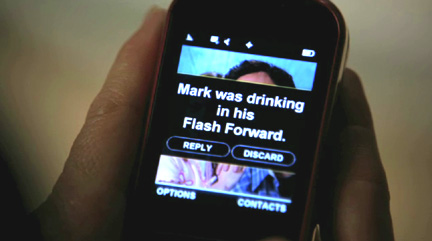 The ff’s themselves are parceled out to us in various ways. In the storyline, hundreds of thousands are collected on the FBI web site, Mosaic; we do not get to know many of them, but the site itself becomes like a new FaceBook, where people look each other up and in some instances make contact with the series’ main characters, often via anonymous messages. We see some characters’ ff in vivid detail and all at once. Those characters who have bad ff are reticent about them and reveal them only slowly. Two children, the Benford’s girl and the villain’s boy, have their own naïve dreams, revealed bit by bit, which seem to point to future events in some crucial way.

Other elements more characteristic of the detective plotline come to the fore episode by episode. Lead detective Mark Benford’s ff shows a caseboard filled with notes and photos from an investigation into this very event, but the caseboard is blurry because he also sees himself as a relapsed drunk (AA plays a large role in this script). Early on, co-worker Demetri helps Mark reconstruct the caseboard, which then grows to be more like Mark’s ff as the episodes proceed. Many of the developments in the series’ action line come from Mark’s ff. In one important way, the script’s withholding of information sets up a break from that ff and offers a pleasant surprise: the villain, Simon, is tantalizingly kept from us from us till the end of Episode 4, when we find out he’s working with the very man, Lloyd, whom Olivia’s ff has shown to be her potential lover. I’d grown thoroughly tired of the plotline’s returning to the Benford’s deteriorating marriage, but now I can enjoy that plotline in a new way as the villainous figures finally enter the plot. 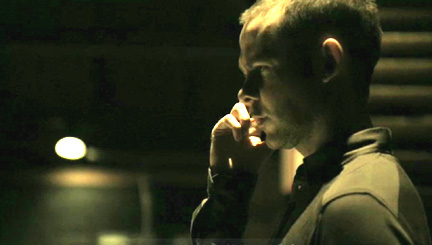 Simon, the Villain, Talking to Lloyd

Episode 5 gave me insight into how acting and cinematography contribute to the series, perhaps beyond the script. Many of the actors have a star image that gives their presence in the show added resonance. (I do not have the space to discuss that here.) Regrettably, I’ve found the acting rather pedestrian in this show, but in this episode, as the unit goes to DC for a Congressional investigation, FBI unit chief, Stan Wedeck, played by Courtney Vance, has a series of scenes with the U.S. President, played by Peter Coyote. Vance is pleading for economic support for his investigative unit and resorts to blackmail with a photo showing the President with a presumed mistress. As characters, the two men seem to have been friends or at least co-workers, and it is a delight to see the two actors so tightly and effectively play off each other. In contrast, I’d grown weary of viewing Joseph Fiennes’ (Mark’s) one-note moroseness as he dwelt on those ff’s of his drinking and his wife’s infidelity. 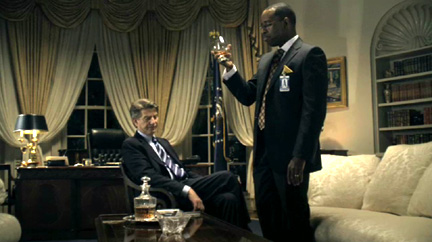 In the same way that the script intriguingly doles out bits of — often incomplete — plot information, it also doles out establishing shots and action sequences in a tightly economical way, so that when these visual moments come, I receive them greedily. Thematically, the series has a lot in common with both 24 and The X Files. But in 24, action comes frequently and in The X Files, each episode usually has numerous establishing shots of strange, fascinating interiors, lit and shot in noir style. FlashForward is more frugal with such visual treats; it offers spectacle to the viewer in accord with a strict diegetic economy. Thus, when Episode 4 ends with a shootout in a DC parking garage between the FBI unit and unknown, seemingly Asian, gunmen, the elegantly shot and edited fight choreography is reminiscent of the shootout tableaux in Johnnie To’s The Mission, and the event also seems to give the agents a kind of pleasure. It confirms their correct strategy in attacking the global crime and it repairs strained personal bonds between them. Similarly offering a delayed pleasure in spectacle, Episode 1 kept from the viewer an establishing shot of the damage wrought by the blackout. We did not see this till mid-episode, after Mark had climbed from a wrecked car, helped others, and then went atop a car on a bridge to look over the city. Clearly, for economic reasons, scenes inside a home or FBI offices are cheaper to shoot, but the moments of spectacle, when offered, are both well shot and placed effectively for maximum audience interest and story development.

I usually do not follow a series over several seasons and am curious to trace out what might make me bored with this one. Already it is clear to me that the premise would have allowed for a far more dispersed narrative focus, with so many ff to choose from. I would have preferred that to the narrowing already in evidence as FlashForward’s episodes proceed. The set-ups related to the Benford’s problems have already become tedious, and Mark/Fiennes is a weak protagonist. However, I am intrigued that the series is training me in proper cult fan behavior, a new trick for me at age 70. Not only has the show sent me to catch up past episodes on the Internet, it now has me enacting obsessive behavior with my TIVO. This week’s afterword, “Coming up on FlashForward,” had a very brief longshot of waterboarding in an underground location. It was hard to get a freeze frame of it and I had to go frame by frame to do so. Finally I could see that the figure being tortured was a woman, but for most of the shot her hair fell over her face. When I did finally freeze the image at the point where I could see the face, I thought it might be FBI agent Janis Hawk but still could not be sure. As an academic, I have been too much of snob to do such clue-chasing as part of my weekly viewing, but now have to acknowledge how cleverly FastForward has anticipated, even mandated, such behavior and scripted it in.