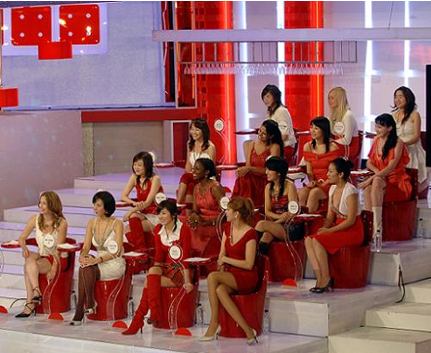 Beauty Chatter1 is a weekly talk show aired in South Korea on national KBS 2 TV, late Monday nights. Since its debut in October 2006, the show has been performing solidly with a stable rating. The “global” in the show’s title refers to its sixteen-member panel, composed of “Beauties” from different foreign countries, who currently reside in Korea and speak conversational-level Korean. These international “Beauties” are single women in their twenties and appear on the show in costume-like dresses of a matching color or a seasonal theme. Each episode has two or three discussion topics that enable panelists to discuss their experiences of Korea. Typical topics include “Most shocking first time experience in Korea” (Episode 49), “When I feel sorry for Korean men” (Episode 18), “When I feel envious of Korean women” (Episode 103), or “When I feel I’ve become a Korean (Episode 112). Together with these discussion segments, the show also features “talent” performances by the “Beauties” such as singing, dancing, and acting.

As a Korean woman living in the U.S., I often watch the show via satellite, mainly because I am interested in following discussions of diversity and multiculturalism, a new topic of public debate in Korea. Even though the show has aspects that are deeply problematic—e.g. putting foreign women on display—I must admit my own amazement at seeing that so many foreigners—108 panelists to date—are interested enough in Korea to learn its language. As a show designed to present “the current location of Korean people through the eyes of foreign inhabitants,”2 Beauty Chatter attempts to provide lessons to Korean viewers in thinking about Korea’s location in the world at large. These attempts, in my view, successfully create identificatory positions inasmuch as viewers sympathize with the panelists’ personal narratives of their confusing experiences in Korea within the context of globalization. Interestingly, on several occasions that I watched the show with non-Korean friends, their responses were consistently negative, producing comparisons to dog shows, freak shows, or politically incorrect Mondo-Cane-variations. Although bemused by these responses, I want to focus on three main ways in which we can make sense of this intriguing show, in relation to the larger contexts of Korean history and global media culture.


An Impromptu Dance Performance by International Panelists and a Korean Guest

The first framework we may consider is the long imperialist tradition of displaying racial others for public viewing at colonial exhibitions in Europe and the US, as well as ethnographic media genres, vibrant from early colonial periods onward. In Beauty Chatter, we find influences of the colonial desire to have a masterful view of the Other, and the assertion of control over the Other through discursive practices. Not only do the “Beauties” function as native informants, explaining about the cultural traditions of their home countries and performing traditional songs and dances, but also the constant emphasis on the spectacle of those performances is revealing. Even though Beauty Chatter follows a talk show format, panelists are seated in tiered rows of seats, facing the camera rather than each other. Panelists frequently complain about the hierarchies of these tiered rows—how younger and better-looking panelists with long legs (i.e. Caucasian bodies) are seated in the front row and older, larger, less pretty panelists in the back row (called “the row of fallen leaves”). Frequent discussions about the physical appearance of panelists serve as a further reminder of how the “Beauties” are positioned as spectacle.

Reading the show as a postmodern variation of the colonial exhibition or the embodiment of reverse colonial fantasy is limiting, however, since in Beauty Chatter, the power of “chatter” is significant in challenging the uneven relations of gazes. Thus, unlike indigenous people in the ethnographic films of the early 20th century, the “Beauties” express their individual ideas in their own voice. This notion of voice is not without problems. For instance, questions over the authenticity of the panelists’ comments have been raised in a recent controversy surrounding one of the panelists, Vera from Germany, who, although known for her smiling persona on the show, turns out to have written what might be read as a scathing critique of Korean society and culture in a memoir originally published only in Germany. However, even if the dialogue of the panelists is manipulated by Korean script-writers, and treated as mere “chitchat,” the fact that they get to speak at all changes the dynamic of power between the host, Korean guests, international panelists, the studio audience, and viewers at home, blurring boundaries between objects and subjects of discourse. However trivialized their voices might be, their act of speaking moves the panelists beyond the level of the “picturesque,” a typical pattern of representing others in ethnographic genres.3

A second framework we may consider is the tradition of putting racial and gendered female bodies on display—the tradition of the international beauty pageant. In Beauty Chatter, the panelists are presented as “Beauties” who represent their respective nations, with their national flags prominently displayed on their name tags. Although the idea of national representativeness has been occasionally challenged—especially regarding those panelists who have a Korean parent—it is taken for granted that panelists speak as representatives of their nation of origin.4 The trope of Woman-as-Nation which pervades the show can be more clearly understood by considering two special episodes in which Korean-speaking foreign men were invited as panelists. While the reason why this reverse-gender format has not taken off as a regular show is far from clear, we can assume that the discomfort in viewing a male performer as a symbolic representation of his own nation may be a contributing factor, simply because we are generally not used to such a practice.

Sarah Banet-Weiser argues that international beauty pageants function as a process of negotiation between the local and the global, in which a nation is self-consciously constructed as a moral community in order to secure its place in the “international family of nations.”5 The romance of the “family of nations” is certainly at work in Beauty Chatter, bringing us to a third framework to be considered. It is evident that the real object of scrutiny in Beauty Chatter is not so much the foreign cultures embodied by the “Beauties,” as South Korea as a nation in transition sketched via the testimonies of the “Beauties.” These testimonies are of value in two ways, showing both the cultural uniqueness of Korea as a modern nation and also how it is now a recognizable member of the global family of nations. This reading becomes more plausible when we consider the postcolonial history of modern Korea.


“I Love You” in the Panelists’ Native Languages

After experiencing Japanese colonialism in the first part of the 20th century, and since forming asymmetrical political and military relations with the U.S. after the civil war in 1950, Korea has struggled to find a means of constructing a vision of a strong modern nation. The encounters of ordinary Koreans with non-Koreans have until quite recently been limited to those with missionaries and American G.I.s. The national imaginary has consequently relied almost exclusively upon the homogeneity of the Korean people and its culture. It is thus hardly surprising that the carnivalesque practice of viewing a foreigners’ talent competition on television on national holidays has been a collective ritual in Korea for decades. While the phenomenon of “foreigner” media celebrities who become celebrities because of their ability to speak local languages is also familiar in Japan (called gaijin tarento), in Korea, where popular encounters with foreign visitors have a shorter history, the spectacle of foreign bodies tends to provoke a more intense fascination. Global Talk Show: Beauty Chatter also originally aired as a special program on Chusuk, a national holiday celebrating the harvest, before subsequently being developed into a regular show.

In the “age of 500,000 resident-foreigners” in Korea6, Beauty Chatter provides a forum for unlikely yet much-needed symbolic negotiations for Korean television viewers. As the belief in the homogeneity of the nation is undermined by processes of globalization, the pedagogical opportunities offered by the show’s friendly façade, with its beautiful international “ambassadors,” reassure the national audience while at the same time enabling it to imagine Korea’s place in the international family of nations. Beauty Chatter thus offers an interesting case study in that it shows how such a seemingly racist, sexist, and nationalist text may still provide polysemic pleasures to its diverse viewers, and a valuable site for negotiations between local, national, and global desires.