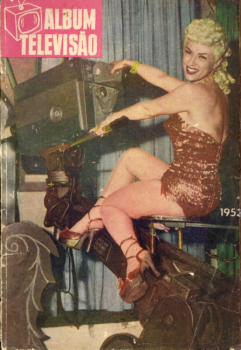 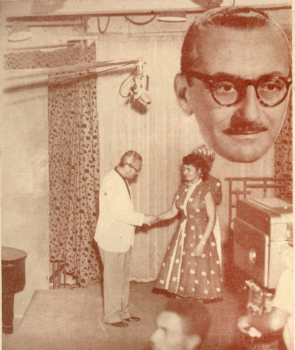 Wandering the streets of downtown Rio de Janeiro, I stopped at the sight of the vintage cover image of a blonde bombshell and a television camera on the 1953 edition of the magazine Album Televisão (Fig. 1). Produced by the first television station in Brazil, TV-Tupi (1950-1980), the magazine seems to be an annual record of the medium for a mass audience.1 As such, the color cover is striking. Her playful and erotic pose behind the camera simultaneously poses serious questions about the popularization of the new medium in Brazil. Specifically: How was television represented to a general reading public there? What were the roles of production workers and technologies in its promotion? How do discourses of television’s production challenge the largely consumerist discourses that organized the mass introduction of television in the U.S.? While I cannot possibly answer these questions, I offer these scanned images to the public domain in the hopes that we might consider them as fragments of an alternative way of chronicling popular discourses around the medium at its introduction into a non-U.S. national context. They suggest the importance of television as a national production medium and an industry for a new labor market. 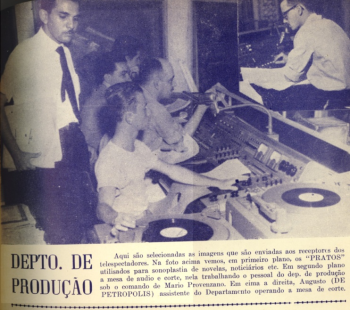 Production on the Front Stage

These numerous images and their stories in Album Televisão lay bare the television production apparatus, showing not just the technology behind the magic of transmission, but also the skilled laborers who manipulate these technologies. This seems to challenge a U.S. history of the medium which hid its own artifice through the guarantee of “liveness,” or an uninterrupted access to the real through objective and simultaneous images.2 Instead, we see the studio set workers and their equipment in the foreground of the photos. Their microphones, camera, and props interrupt the illusion that television brings viewers the unmediated world (Fig. 2). In Album, the “magic” of television, promoted through early American programs, is man-made, attributable to television studio workers who “select…the images that are sent to the receivers” (Fig. 3). 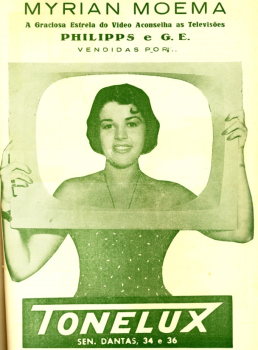 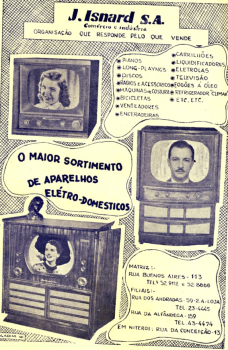 Similarly, images of the television set in Album lack the viewers’ fantasy of what Raymond Williams famously termed “mobile privatization,” which brought viewers to distant places from the safety of private spaces. Advertisements instead challenge the narratives of domestic transport, familial harmony, and middle-class status that Lynn Spigel has documented as central to U.S. consumer culture.3 These television ads feature what seem to be everyday people alongside stars (Fig. 4), and television sets as just one of many middle-class domestic items, such as pianos, blenders, and bicycles (Fig. 5). Not only does an advertisement for living room furniture omit a television set, the modern sofa faces out a window, treating those inside to “more air… light… space,” and a view that extends only as far as their own neighbors (Fig. 6). Whereas U.S. imagery showed a world unified by consumption, the images suggest continued separations between the private lives of its families and the public lives of its workers. 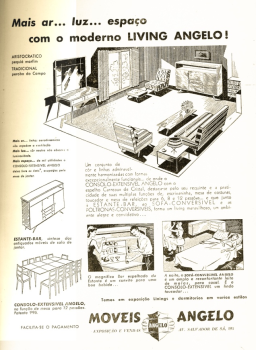 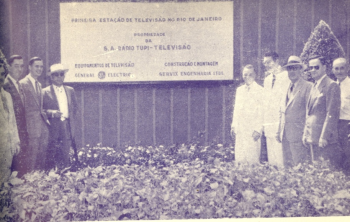 Indeed, production work and production workers seem to be the main theme connecting the fifty or so pages of the annual. Although Album presents a catalogue of television stars, complete with the soft-lit portraits and idolizing biographies in many fan magazines of the era, the stars here are also workers. In the opening editorial of the magazine, the directing manager for TV-Tupi claims that “overnight, the men of Rádio-Tupi had to grapple with the problem” of launching a television station, a battle from which “only the few triumph.” This rhetoric follows longer trajectories that posit the contradictory importance of technology and labor to the formation of the Brazilian state. Populist and fascist dictator of the 1930s Getúlio Vargas saw broadcast technologies as a way of creating new technologically advanced, but politically pliant Brazilian citizens. Working in concert with the Nazi German state, the Vargas regime introduced television in the Television Exposition in 1939.4 Held in Rio, the exposition featured principally the transmission of radio producers working on a television set. Furnished by Rádio-Tupi, the workers demonstrated to the exposition visitors the power of both the technology and the Brazilian producers who made aural radio culture into televised images. Although General Electric and Westinghouse would prevail in introducing the actual technology and training for TV-Tupi’s management when it began in 1950 (Fig. 7), the beginnings of Brazilian television seem to be formed in part from their difference from their Northern suppliers – one that valued television, at least in part, as a site for cultural laborers. 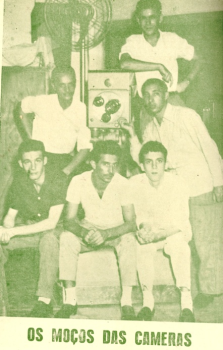 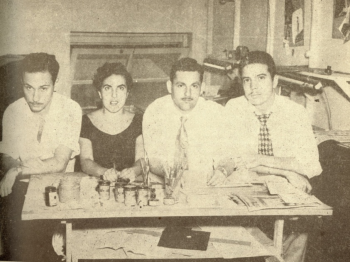 Marking the transition from radio to television, these early television workers infer some of the gender and racial contradictions in the formation of Brazil’s modern cultural workforce. In Album, men and women work in the fledgling industry, but in gendered roles to be sure. Men dominate the serious business of making news and operate the heavy machinery as the “camera boys” (Fig. 8). A lone woman, contrastingly, draws alongside her male colleagues in the art department (Fig. 9). Drawn from radio production, the photos document many people of color who worked in early television, many more than would be visible in subsequent decades.5 Yet, we also see the legacy embranquecimento, or the state policy of whitening through restrictive immigration laws. Afro-Brazilians who worked in front of the television camera in Album look noticeably “whitened,” their hair straightened and skin powdered. At the same time, the semiotics of a photo accompanying a feature story on the station’s make-up department renders some racial ambivalence as a dark-skinned man shows off his grooming techniques on presumably two actors: one white and one brown (or “moreno”) (Fig. 10). In this multiracial assembly, it seems evident that the passive actors depend on the active (and black) cosmetic artist. In less than a decade, despite the national slogan to achieve “50 years of progress in 5,” these personnel would move back into the shadows of television production. Perhaps my favorite photo in the magazine shows this presciently, as the then-recently deceased radio star Sonia Ketter literally and figuratively “clocks out” of the new market for television workers (Fig. 11). 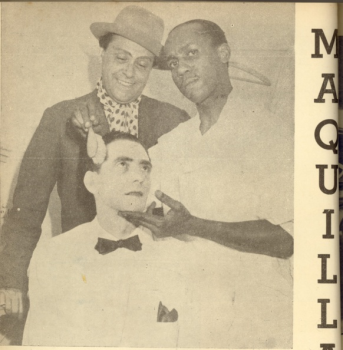 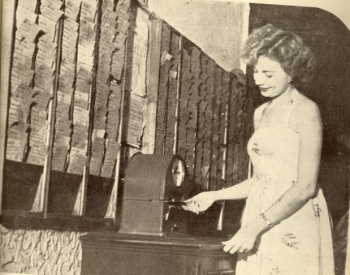 Towards a History of Early Production Discourses

There is no caption that names the showgirl in the cover image, but what the subsequent pages of Album Televisão make clear is that she is a performer performing production. Yet what this means in terms of television history in 1950s remains to be mined. Brazilian communication scholars have recognized the need to study their own media history in ways that “consider the productive conditions of the media product, both in terms of institutions and their socio-historical contexts.”6 I would add non-Brazilian media scholars bear this burden as well. If showgirl behind the camera seduces us to consider television’s global histories as a production medium and labor market, then she is much more than just a pretty face.

Image Credits:
All images are scanned from the original magazines and are in the public domain.