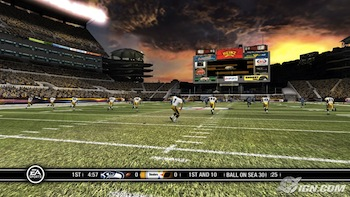 The new media age is upon us and a major benefactor in the world of professional sports is the National Football League. True, the NFL has long been the darling of broadcast television with the Super Bowl still regarded as one of the most-watched (global) media events. Beyond the sport’s success in broadcast there has seen a surge of new forms of fandom due to new media’s role in fantasy football and video games (in particular Madden NFL). These forms have enabled fans/users to increase their weekly intake of NFL to preposterous levels. Fans now engage in their own games of control and ownership over the sport by participating in online communities. Convergence media as espoused by Jenkins1 is certainly illustrated with football as an example of the mediated form. Today, the fan can receive stats and fantasy football updates on their mobile phone. Fans can take any team to a Super Bowl in a video game’s alternate reality. In terms of sheer numbers, fantasy football participation has grown by nearly 10 percent a year2 with an estimated market of 27 million players3 . The success of the Madden game franchise is equally staggering with an estimated 70 million units of the game’s various incarnations sold worldwide in the game’s 20-year history.4

Fans in this new media age are constantly searching for greater levels of interactivity and personalization. Is this a product of the control that new media has enabled? Or is football’s real-world form so successful that it has crept into new media forms as a means for further capitalization? Are these new forms merely exemplary of participatory culture or something more? What future lies ahead for the NFL, Madden NFL, and fantasy football?

Fans engaging in the ritual/spectacle of NFL football desire more, and technology has the given them choices. Video games have tapped football fandom and allowed for a level of interactivity and control previously unknown. Similarly, fantasy football has exploded into the realm of football fandom with the aid of the Internet. Both these new mediated forms have changed how fans interact with football and in turn football has adjusted to their influence as well. 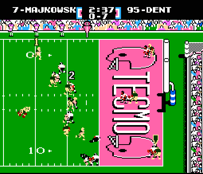 But the release of the first John Madden Football game marked an important shift in how game technology could improve the user’s experience. The simple switch to a view from behind the quarterback/defense made the game move in a vertical fashion and enhanced the feel of the game as a more immersive experience (see figure 2). 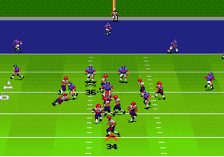 The NFL and broadcast networks took cues from these progressions in football video games. The convergence of video game aesthetics with NFL broadcasts is perhaps best exemplified in the above-the-field camera or “skycam” view, which introduced a perspective that places the viewer directly behind the quarterback as he snaps the ball and follows it wherever it may go from there. This camera angle is best likened to the Madden aesthetic (see figure 3). 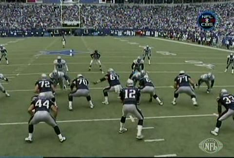 Figure 3-Tom Brady takes the snap and viewers pick up their Xbox controller.

Aside from continuous attempts to make each incarnation of Madden more life-like in graphical presentation, the game introduced a new layer of control when its 1997 version allowed for “owner franchise mode.” The game expanded beyond the simplified task of team matchups and now allowed for the user to manage and create a team of their own. The franchise mode grew increasingly sophisticated with the gamer acting as owner making such decisions as parking rates, player salaries, trades, new stadiums, and even the option of relocating the franchise to a more welcoming city.

This heightened level of control for the Madden gamer also centers around knowledge of players and their skills or attributes. In the game, each player (based on real NFL players thanks to publisher Electronic Arts’ exclusive NFL franchising rights) is given point values for characteristics and abilities like speed, jump, blocking, throwing accuracy, agility, and so forth. It becomes the task of the gamer to know what skills are important in what positions and craft their drafting and trade decisions around the player’s attributes. The user in Madden acts as owner/coach choosing which players they prefer and who will make the team’s starting lineup. Rob Walker of The New York Times in writing about the release of Madden 2005 profiled a 20-year-old gamer who has been playing the franchise since he was seven. Walker writes of the gamer, “the Madden experience is deeper than (the computer-generated skills of players). You have to know the playbook. You have to be on top of real-world football players’ stats because the affect the performance of players’ Madden-world counterpart.”5 The Madden effect is clearly shaping people’s understanding of the sport, generating a more savvy and football literate fan. The game has taken the mythology of a coach’s acumen and usurped it with gamers capable of deciphering team formations and plays. But not all fans want to or choose to participate in the fantasy world of Madden, instead they participate in an online culture dedicated to the real-world games/players.

The online world of fantasy football has the user act as owner selecting a squad of real-life NFL players to make up a team consisting of quarterbacks, running backs, and other key positions—fantasy football is an offense-oriented form of the game. Each week during the NFL season, the user selects their starting lineup based on various factors (injuries, opposing team, weather conditions, etc.) and players score points based on their real-world statistical game performance (yards, TDs, etc.). The fantasy user exerts control over their team, yet they are still at the mercy of real events like injury. The season-ending injury of Tom Brady during the first game of the 2008 seasons was a blow to Patriots fans, but it was perhaps more devastating to fantasy owners who picked Brady to be their QB.

A curious intersection of all three forms occurs when exploring ownership. Much of NFL’s history has included an infatuation/curiosity directed at the owners and coaches of football franchises. Most football fans know that Jerry Jones owns the Dallas Cowboys; likewise that Bill Belichick is the coach of the New England Patriots. This is due in part to media’s elevation of these individuals as celebrities. The owners and coaches become symbols representing the success (or failure) of a team. Often fans will hitch their grievances against a team as symptoms of poor management and/or coaching. The new media forms offer fans/gamers an opportunity to override the real-world motivations of these management figures and instead gives them a seat in the owner’s box. Much like the depth of control in franchise/owner mode in Madden, fantasy football users experience a coach’s anxiety over whom to place in the starting lineup, as well as the crucial ownership decisions of who to keep on the team.

In line with ownership and management, all three forms of football have an annual draft and scouting period. The real-world NFL draft determines what (new) players are included in the Madden game. The Madden gamer can either accept the pre-determined rosters or they can chose to draft a differing set of players. Much like fantasy football, a user is able to construct a team of players who do not play together in the real world. These options, presented through the mediated realities of Madden and fantasy football, create a new type of football fan no longer devoted to a regional team, its roster and its identity. The genius (unanticipated side effect?) of fantasy football is that mild fans of one regional team have grown to “NFL fans” interested in nearly every game and stats for the week. Fantasy owners sometimes find themselves in precarious positions of rooting for an individual to perform well, but still caring about the success of their real-world team. The impact of fantasy football on real football is apparent in the broadcasts, which feature real-time scrolling stats for games and individuals as well as half-time “fantasy stats updates.”

The convergence paradigm has altered the landscape of how fans are interacting with their sport creating a space where fantasy meets reality. It is likely true that today fans at a football game on a Sunday afternoon are checking fantasy stats on their wireless. Likewise, the pedestal owners and coaches have been placed atop erodes as these new forms elevate fans to informed participants, owners, and coaches of their own football reality. True, the sport has benefited from a resurgent, growing and informed fan base, yet these same characteristics may challenge the mythology of football in an attempt to create a more corporeal experience for the fan/gamer.

Jacob’s is a native of farm-life in rural Illinois where high school football was akin to “Friday Night Lights.” He received his bachelor’s degree in Journalism (minor Cinema Studies) from the University of Illinois where he studied Madden with his college roommates. Jacob’s own fantasy football league consists of Chicago Bears fans with a “no Packers/no Farve” rule. He is currently studying for a PhD. in Communications and Society from the University of Oregon. jcomm.uoregon.edu/faculty-staff/jdittmer