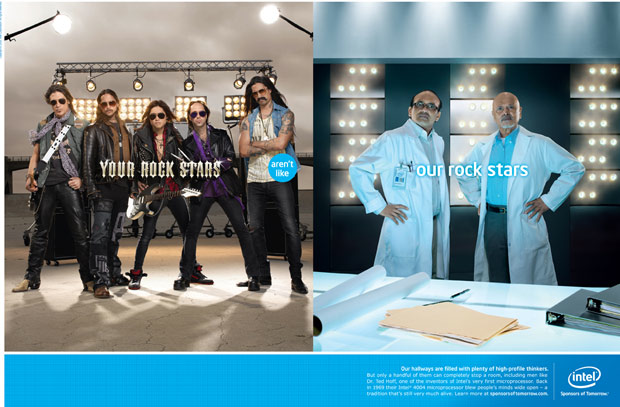 In a recent television advertisement in the U.S., the Intel Corporation announces, “Our rock stars aren’t like your rock stars.” The tag line creates two distinctive cultures where one world is the people who work for the future in a glass box at Intel and the other is our everyday world. The thirty-second ad (constructed as a window on the Intel world) includes a musical score with an electric guitar, a bass beat, and a collection of visuals that herald a new star—an Indian American named Ajay Bhatt, the co-inventor of the USB. However, the man in the commercial is not Ajay Bhatt but an Indian actor who bears more resemblance to Apu, the animated character from The Simpsons, than the real man. Perhaps with the proliferation of South Asian faces in popular culture that range from Dr. Sanjay Gupta to Governor Bobby Jindahl to American Idol Anoop Desai to host Padma Lakshmi, the fake Ajay Bhatt should not be the cause of so much concern. And yet in the face of so many other images why cast the same image of Indian Americans? Why can’t Indian Americans be rock stars in both worlds?

At first glance the advertisement appears to be a humorous spot that redefines the American definition of a male hero as an Indian American computer engineer. The rapid growth of the computer industry in the 1980s and the information technology boom in the 1990s led to the widespread hiring of specialized labor from India. The Immigration Act of 1990 introduced the H-1B visa that allowed U.S. companies to recruit foreign labor in specialist positions for up to six years.1 A majority of the recipients were programmers and informational technology workers from India and China and so it should not be a surprise that many of the pioneers in technology companies in the U.S. are Asian American. Instead of American musicians or celebrities the advertisement emphasizes that in the world of Intel (and tomorrow) the American hero is an Indian man who sports a mustache and puffed up wavy hair, wears loafers and sweater vests, and invents innovative technology for the world. 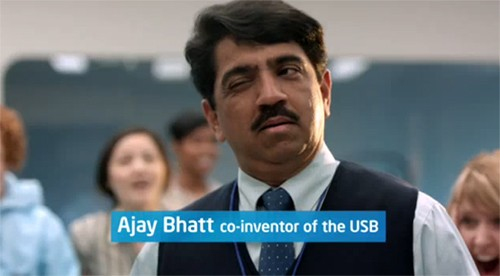 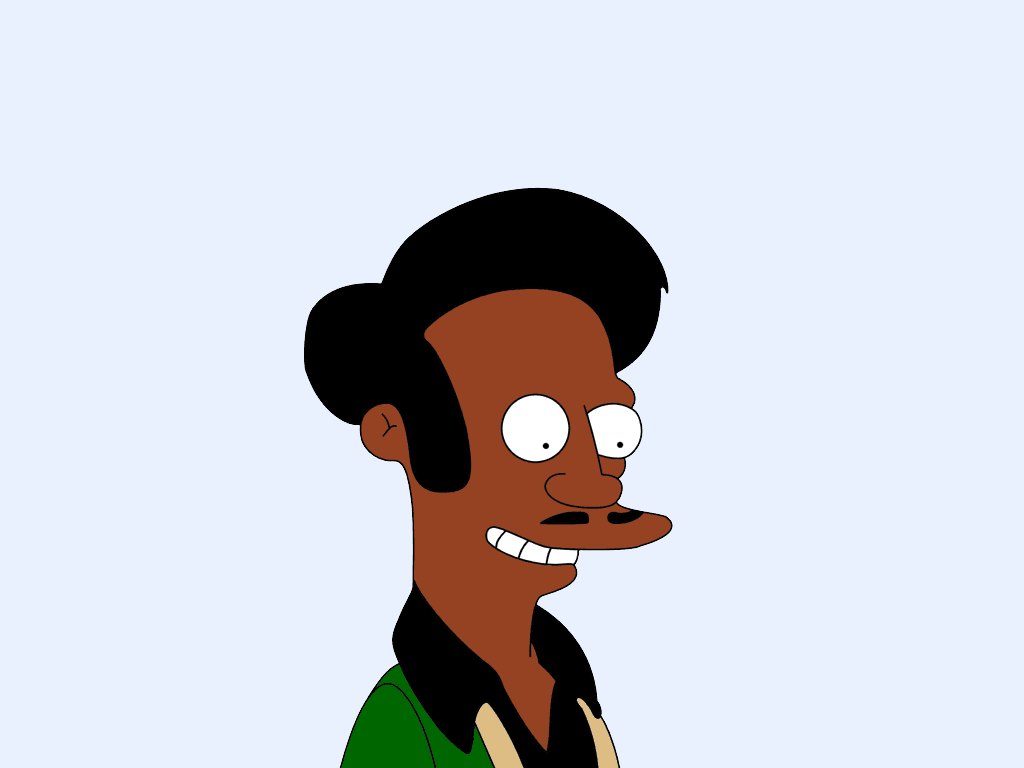 …and The Simpsons’ Apu

On one hand, the ad suggests that we should be rethinking who we see as the heroes of our generation. In slow-motion frames, people scream, men point to his image on their t-shirt, women swoon, and others take his picture with their phones and cameras as the fake Ajay Bhatt nods, winks, signs autographs, and basks in their attention. But on the other hand, this exaggerated behavior creates a comic moment because the visual of the actor playing Ajay Bhatt defies American audience expectations of who represents a rock star. Has an Indian American man who looks like the stereotype of a smart computer geek really replaced Bruce Springsteen, Michael Jackson, and Adam Lambert in the American imagination? The ad is not redefining the American hero but in fact reinforcing the idea of Asian American men as a minority who are rarely seen as rock stars in “our world.” If the actor were a different race or ethnicity, this ad campaign would not be humorous or effective because it would not be juxtaposing a fantasy world with the real world or showing something unique. The message behind the humor separates Indian Americans from everyday American popular culture icons and instead confines Ajay Bhatt and anyone like him to a single image and bars him from creating an alternative image of what an ethnic hero can look like.

Anxieties about new immigrants to the U.S. have historically appeared in visual popular culture such as film and television. Depictions of Asian men in American popular culture have consistently cast aspersions on Asian American nationality, masculinity and sexuality.2 Common characteristics associated with Asian men on television include the passive or effeminate but intelligent nerd, the foreign student with an accent, or the martial arts expert.3 Indian Americans are typically are depicted as foreign or alien to the United States and in dramatic television this image is consistently invoked and replayed with little variation. There are some exceptions with characters in shows like Lost and Heroes. Reality television is doing a better job at creating popular ethnic heroes who defy stereotypes. The mediated nature of reality television has individuals cast in relation to stereotypes such as the Zen master or the smart one and in general Asian American men appear as objects to be laughed at rather than taken seriously as American heroes.

However, in a 2000 Newsweek story, “Why Asian Guys Are On A Roll,” Ester Pan writes that the rise of the Internet millionaires such as Jerry Yang (co-founder of Yahoo) turns the “traditionally negative stereotypes of Asian males as smart, studious and hardworking [into] positives. They’re practically turn-of-the-century American heroes.”4 In her argument, the definition of a male hero includes someone who shows innovation and has financial success. Desirable American masculinity is characterized by economic success. Asian Americans as entrepreneurs in American technology are representatives of the American Dream. The underlying message and comic appeal of the commercial relays that technology is sexy (and lucrative) and Indian Americans are the creators of that technology. 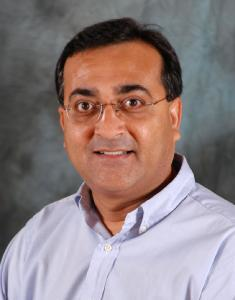 The ad invites us to imagine a different world at Intel and yet the behind the scenes information is that Ajay Bhatt is played by an actor. As it turns out the “real” Ajay Bhatt is the anti-thesis of the image presented in the commercial. The real person is distinguished Indian American gentleman who resembles a polished business executive. Stereotypes make for great comic fodder but when the same joke is told over and over again you are constantly creating barriers of who can be called an American hero and blocking the idea of an ethnic hero. For example, when Conan O’Brien found out Ajay Bhatt was played by an actor he decided to invite the real Ajay Bhatt to his late night show (10-9-09). The show is edited to show how Conan wants to depict Ajay Bhatt as a man who speaks in techno-babble, is merciless to his competitors, and wants to impress young women with his accomplishments. Conan does not ask him about being Indian or being a rock star. Instead he can only talk to Ajay Bhatt in terms of a stereotype of an Asian American computer geek who is shy, passive and unattractive to women even though Ajay Bhatt is an articulate and respectable man. Conan cannot picture Ajay Bhatt outside of the stereotypes he has been given. His attempts to characterize the real Ajay Bhatt in stereotypical terms comes off as awkward and reveals more of a crisis in Conan’s definition of American masculinity. Just by appearing on the show, the real Ajay Bhatt redefines how we think about Indian Americans and local heroes because he challenges conceptions of American masculinity in a way that the actor who is a caricature cannot because he is a two-dimensional construct. In this way Ajay Bhatt (unconsciously) represents a true “rock star” because he defies convention.

While the advertisement promotes a different world where the professionals are Indian Americans or Asian Americans who are boxed in by the continual replaying of stereotypical definitions, the Campaign of the Sponsors of Tomorrow, according to the real Ajay Bhatt, is supposed to promote the people behind the products. Perhaps in telling the story of the actor Ajay Bhatt and the real Ajay Bhatt, he has become a household name in America and in fact may be breaking down the walls between the distinct Intel worlds.5