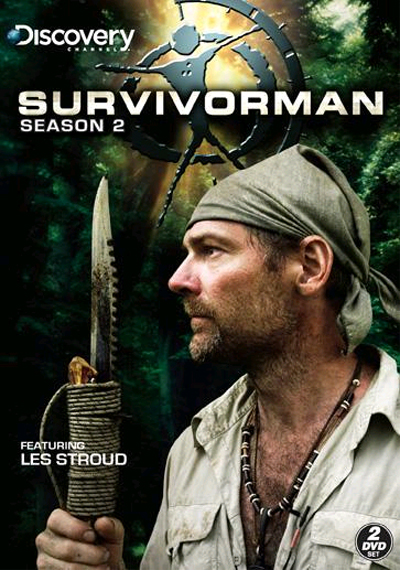 Following my previous column’s theme of the masculine primitive element in Mixed Marital Arts culture, I wish to present an exercise in genre mapping which traces a constellation of reality television programming based in a related impulse towards the dramatizing of masculine prowess, of male bodies at “play,” at risk, in extremity, testing ordinary thresholds and limits. Here I am thinking of the emergence of shows such as: Man vs. Wild, Survivor Man, Going Tribal, Tribal Life, Human Weapon, Last One Standing, Fight Quest, WildBoyz, and the most recent addition to the genre, Alone in The Wild.1 This grouping of shows figure prominently male spatial mobility, dealing with themes of survival, cultural and geographic isolation, forms of “primitive” contact or cultural expression; of challenging the boundaries and habits of the male body in exotic and threatening places and situations; of escaping the modern socially disciplined body to one more “natural” by subjecting it to “wild” environmental elements, sometimes animals, sometimes climate, sometimes indigenous peoples, sometimes one another. Thanks to the programming of Discovery, National Geographic, Travel Channel, MTV, and others, the project of communicating one foreign culture or environment for another, something that for much of the 20th century was the near-exclusive province of National Geographic magazine, is diversifying its repertoire. This grouping is a fascinating and often problematic subgenre of reality television devoted to quasi-ethnographic adventuring and nature explorations, some wholly earnest in their humanist cultural pieties, others tongue-in-cheek performances of primal masculinity. The latter I view as evidence of ruptured myths of purity and honor associated with accessing a spiritually regenerative preserve of primal masculinity. The “irrationality” of invoking the dichotomies primitive and civilized Haraway speaks of, when “purity” and “authenticity” are such unstable categories, creates a tension between romantic (or nostalgic) postures towards the masculine primitive, and those which use it as fodder for parody of essentialist gender tropes.2 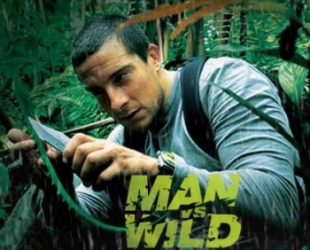 Bear Grylls in the Discovery Channel’s Man vs. Wild

Isolation (and rugged self-governance which accompanies it) is central to the masculine imaginary of a “natural” self and the tests of manhood associated with accessing primal potential. Privileged mobility is another trope of rugged, “authentic” masculinity. We witness these in the solo adventure formats of Survivorman and Man vs. Wild appearing each week in a different part of the world. The production crew documenting Bear Grylls’ survivalist savvy in Man vs. Wild is entirely effaced, while Les Stroud of Survivorman goes into the wild without a crew and does his own camera work –he films himself. Stroud’s self-documentation format heightens viewers’ awareness of his isolation, and I’m reminded in this of something Haraway says about the photographic “technologies of visualization:” they “recall the important practice of hunting with the camera and the deeply predatory nature of a photographic consciousness.”3 The camera self-sighted on Stroud in isolation in remote and exotic environments then is, ironically, a necessary tool in the postmodern arsenal for self-discovery and fantasies of primal access.

Crucial to this is Grylls’s and Stroud’s enactment of a certain skill-set, including a certain physical durability and resilience to the elements, all part of a practical knowledge base appealing to an older gendered division of labor in which manliness is comprised of certain competencies. Foremost of these is the construction and use of tools and technologies, in this case archaic technologies and a working knowledge of the natural world for surviving in extreme and varied environmental conditions.

But we live in a moment of almost obtrusive irony and reflexivity where these ideals are just as readily parodied as praised. For example, some may recall the hilarious episode of The Office where our suburban Michael Scott conducts his own comically flawed solo trip into the wild, (something any proper fan knows the rural savant Dwight is much better equipped for). Even Man vs. Wild took a comic turn when Will Ferrell was Gryll’s co-adventurer for an episode. This played perfectly into Ferrell’s now standard performance of the buffoon alpha male as he feigned rugged fearlessness despite being wholly ill equipped for the conditions.

The Office‘s Michael Scott tries out being a Survivorman

Another fascinating parody of the wildlife-adventure and cultural-adventure formats is the MTV series, WildBoyz, featuring Steve-O and Chris Pontius. The show vacillates between wildlife stunts –ranging from the obscene (hosing down, and sizing up, a male Tiger’s gonads at a Buddhist “Tiger Temple”), to the absurd (running naked with ostriches), to the glaringly stupid (swimming with sharks)– and irreverent participatory performances with the local cultural tourism industry. Yet somehow their antics do not seem as irreverent as one might expect with locals appearing mostly unfazed and even playing along. Whether this response is by force of MTV and its celebrity, by local subjects’ being literally lost in translation, or because most of the cultural performers have long since accepted their participatory role in cultural simulation for survival, I’m not sure.

Wild Boyz is aware of the typical sobriety and seriousness that suffuses the genre they mimic. Each scene involves a formal interplay between an “objective” voice-over narration complete with British accent (“the long neck women of Mehong Sun wrap heavy brass coils about their necks, a tradition once believed to prevent them from marrying into other tribes”) and the gross body, juvenile shtick of Chris and Steve-O (“holy crap we’re in the middle of nowhere Thailand now! Oh yeah these women look great with long necks!”). (The film Strange Wilderness (2008) is another send-up of the wildlife genre exhibiting a similar posture towards nature (“bears derive their name from a team in Chicago. It is estimated that Bears kill over 2 million salmon a year. Attacks by salmon on bears are much more rare.”). 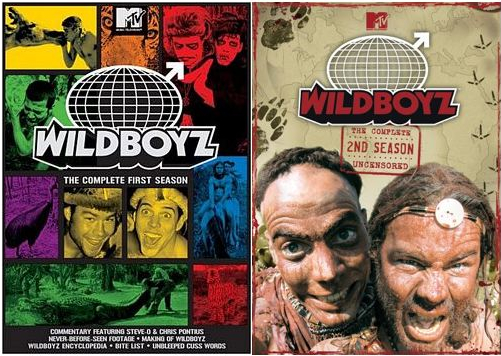 Reality television often capitalizes on dramatic material provoked by plucking social actors from their native environments and dropping them into foreign ones (Survivor, the example par excellence). Exoticism and its close accomplice, voyeurism, are the cultural foundation of much of the reality TV landscape (not all of course –some programming relies on pleasures of mundane worlds). Consider the short-lived Discovery Channel experiment, Last One Standing. The show takes six athletes from developed Western nations and drops them into indigenous communities from South America, Africa, and South Asia, where they spend a brief period training in one of the community’s traditional forms of combat or physical competition. Then they compete in contests against the locals (not unlike Human Weapon and Fight Quest). Whoever wins the most events throughout the show is “the last one standing.” A New York Times review aptly described it as “Survivor meets Ultimate Fighting.”4 Seems like a good formula, but I think the earnestness of its quasi-ethnographic pieties combined with the well-worn reality competition format was too much for people to stomach (cancelled after one season). Despite its cultural insensitivity, Wild Boyz is considerably more transparent in its use of foreign cultures and environments.

Last One Standing emphasizes the challenges of adapting to strange athletic forms and their accompanying rituals. The Westerners’ identities are configured in terms of their athletic backgrounds. Each is a representative of a modernized Western sporting tradition: a fitness guru, an endurance athlete, a BMX racer, a “strongman,” a rugby player, and a kickboxer. As the show’s narration says, the athletes must “accept the challenge of traveling around the world to compete against the most remote tribes on earth, on their terms. But will their Western skills count for anything?” This is a recurring motif throughout the series –for the western athletes to take stock of how contact with foreign forms of athleticism and competition put their strengths and prowess into perspective. Learning Senegalese wrestling, a contestant states, “I feel weak. I feel unskillful, I thought I was skillful.” The narrator says of one British athlete, “he has made his mark playing gentlemanly sports like cricket and croquet. Richard is here to prove he is tougher than his privileged background might suggest.” But the combination of a conspicuously exotic mise-en-scène and the cross-cultural agonistic “play” (the British cricket player grappling with a Senegalese wrestler) may have raised too many troubling specters from the colonialist explorer imaginary.


Trailer for Last One Standing

What does this contemporary genre mapping suggest about the persistent impulse towards the sincere masculine primitive, and its convenience to mockery? In her Cyborg Manifesto, Donna Haraway argues that our growing (in)human intimacies and interfaces with scientific and electronic technologies (to the extent of becoming veritable prosthetics) render the central dichotomies of our classical Western episteme (primitive/civilized, etc.) altogether blurry. This growing alienation and a global state of environmental panic are generating renewed attempts at rehabilitating our sensitivity to the natural world; to relearning states of (im)mediacy that necessitate (discursive if not literal) distance from the so-called artificial and the synthetic, and renewing contact with the natural and the authentic. These terms are all highly equivocal, perhaps even irrational, but recourse to categories like primitive and civilized are required, as they still remain very much constitutive of our commodity culture. Awareness of the masculine primitive as merely social performance or construct may inspire its parody, but it will not make it go away as such.