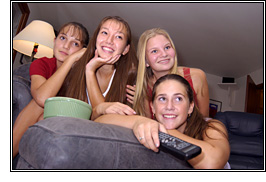 A group of girls watches TV

This summer I supervised and worked with a university student, Laura Knox, who won a competitive McMaster University Undergraduate Student Research Award, which funds students to work with faculty on summer research programs.1 Her interest was in body image and media, and we decided to create a media literacy project around issues concerning media, gender, and identity construction. We planned a multi-session workshop for girls aged 10-13, in which they would discuss the media they use, while learning some critical media and self-development skills from the experience—a form of action research.2 The goal of the project was twofold—to learn, in an academic sense, about the meanings and uses of media in girls’ lives; and second, in a praxis sense, to “intervene” socially, to encourage critical media and social awareness and production, and encourage positive self-image/reflection. An external goal was to provide undergraduates a rare opportunity for sustained research on a topic of their interest and close work with a faculty member in their field. For me, the project was partly about the girls’ media literacy work, but also about facilitating my university student’s growth as a researcher and youth worker—roles that she enthusiastically embraced.

The process: Girls were recruited to participate in a two-session workshop, and to keep a media journal in the week in between the two sessions. All the girls were drawn from a sports camp, due to issues of access. This created an interesting section of girls who were keen to participate and who were athletic—two specific traits that are not necessarily common amongst all girls aged 10-13. Regardless, the workshops and journal activity were created to promote critical media awareness and self-identity awareness, and hopefully notice the links between media use and identity.

The journal: After planning the journal’s contents, Laura designed—media literacy in action—an original font and pictures, by hand-drawing words and flowers, and scanning them into PhotoShop to produce a colorful spiral-bound paper journal. She left the front cover blank so that the girls could decorate their journals to reflect their individual personalities and tastes. She also prepared a mini craft-bag for each girl, with stickers, words, and brightly colored flowers and stars to decorate the covers. Journal entries alternated between reflections on self and reflections on media usage. The entries included “Be yourself” (an opportunity to personalize the journal with a picture and basic information about the girl); “Watch” (a TV/movie viewing exercise); “Create” (your dream vacation, job, and bedroom); “Read” (magazine articles/advertisement critique), “Grow” (relationship exercise about family and friends); “Hear” (a song reflection); “Be yourself” (a list of favorite things). The final several pages of the journal were formatted with the theme “Grow. Create. Be. Stand. Discover.”

The workshops: Two one-hour workshops were created. In the first session, we planned a few discussions and exercises to discover what media the girls like, to find out what their interests were, how they use media, how they talk about media, and what types of criticality they seemed to possess about media and self. The nine participants were sent home with the journals. All the girls returned for the second session, in which they shared, voluntarily, the ideas and thoughts from their journals. They were excited about the crafty nature of the journals, and the opportunity to make a statement about themselves. Because of the emphasis of FlowTV, in the remainder of this piece, I will emphasize the television and film portion of the workshops and journal.

The exercise “Watch” instructed the girls to choose their favorite TV show or movie. “Look for reasons why you like it and see how it affects you by answering these questions.” 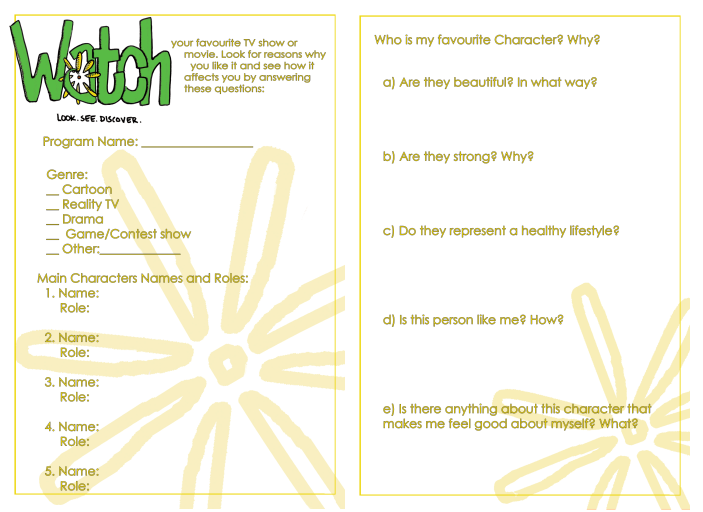 Watch activity from Grow. Create. Be.

Of course, this is not a scientific survey, but I was surprised at the wide range of content that the group discussed. Favorite TV and films ranged from tween fare such as The Suite Life of Zach and Cody, The Clique, and Twilight; to comedies, e.g., Family Guy and Scrubs; to reality shows: Jon & Kate Plus Eight, Cake Wars, and Toddlers and Tiaras. Girls were comfortable sharing their favorites while not criticizing others’ choices, despite the differences in responses.

Some kids, even younger than in our group, enjoy, if not prefer, reality TV to “kids’ shows.” In my house, my two young children cried when Adam Lambert lost American Idol, regularly watch the Cirque du Soleil’s artistic performance TV program, Solstrom, and love the Japanese competition show Unbeatable Banzuke. A mother I know recently watched Supernanny with her two-year-old to demonstrate to him the necessity of staying in time-out when he’s sent there. It worked. The participant whose favorite show was Toddlers and Tiaras loved watching with her sister, cousins, mother, and aunts, and enjoyed how her family takes the moral high ground while viewing, and the shock factor of the characters on the show. Does this suggest that reality TV is today’s “real” family programming? Many educators, parents, and sporty girls are critical of the Princess trend (Disney and beyond), and many “family movies” are ones that are either actually fun for children and boring for adults, filled with adult humor and too adult for kids, or made for kids but are just too scary (a recent home screening of Madagascar demonstrated that small children can cue into subtle lighting, camera angles, and musical signals that “bad things are about to happen,” and emotionally intelligent or sensitive children can be frightened off by a G-rated film). 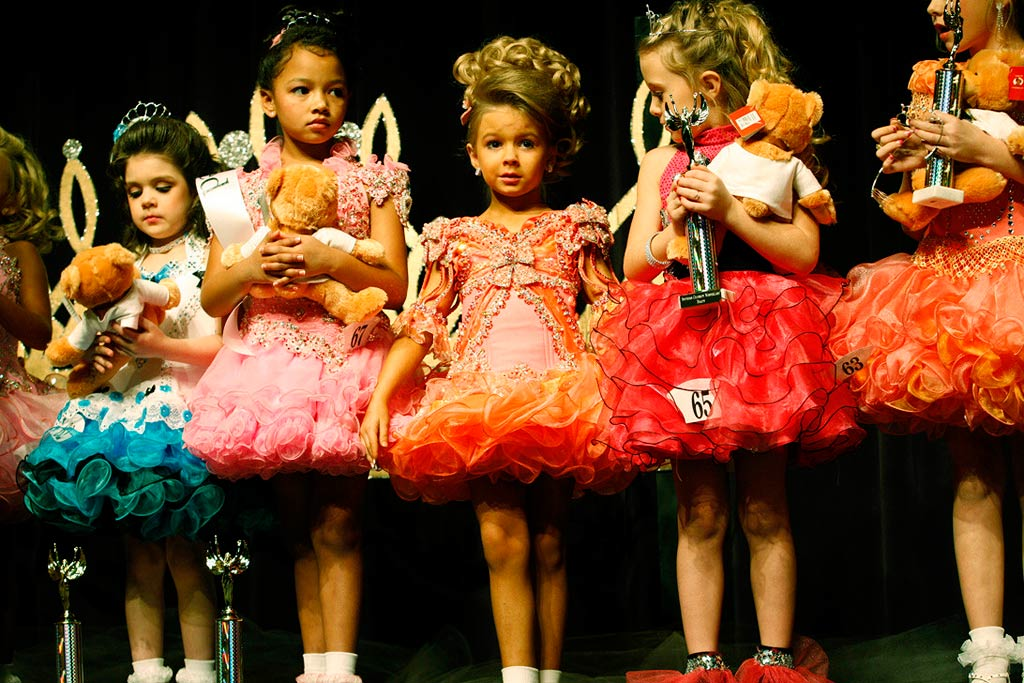 Toddlers and Tiaras: an example of “real” family programming?

Most participants made general comments about the characters’ beauty and strength, and many perceived “strength” in a physical sense, and had to be redirected to understanding strength in a more abstract sense. A few of the girls anticipated this meaning of strength, and were able to discuss their movie/TV show in a more sophisticated manner, even if they seemed to over-attribute positive characteristics. They were much more interested in discussion that seemed more fan-based, such as the starter questions of who their favorite characters were.

What struck me, as well as Laura, was that the level of criticality was particularly lower when humor was involved. Many girls said they liked shows or characters because they were funny—which obviously is a good start in understanding one’s media preferences, and in society’s viewing habits as a whole. Laura, being an excellent moderator, probed deeper into the participants’ preferences towards humorous materials. Most girls, however, couldn’t explain why they thought something was funny, beyond the first level, such as “Stewie’s head looks like a football.”

What was also more difficult for them was relating media humor to their real life.

Laura: “A lot of you are talking about how your favorite character is always the funniest one. Do you find that at school there is always a ‘class clown’ that everyone likes and thinks is funny? Do you find that you are drawn to the same kind of funny people in the TV shows?”

Respondent: “Yeah, but not like an immature funny. Like, not people who mouth off and make jokes about people. Like those kind of jokes that aren’t true and that are mean. Jokes have to make sense and be about real life, not people.”

Laura: “So you are drawn to characters like that in television shows too?”

Respondent: “Yeah. Everybody likes somebody to laugh with and stuff and people like to be entertained and stuff. People like to have fun.”

As Laura analyzed in a later report, these responses are actually contradictory. While claiming to not like “immature funny” in life or on TV, the same participant discussed a program that could arguably embody “immature funny”—Scrubs. Could it be that they don’t understand the program? Or, it seems to me, it could be that they anticipate “correct” answers during the workshop and thought we would want them to appear to be sensitive, thoughtful, and kind, and not laugh “inappropriately” or watch “inappropriate” materials. 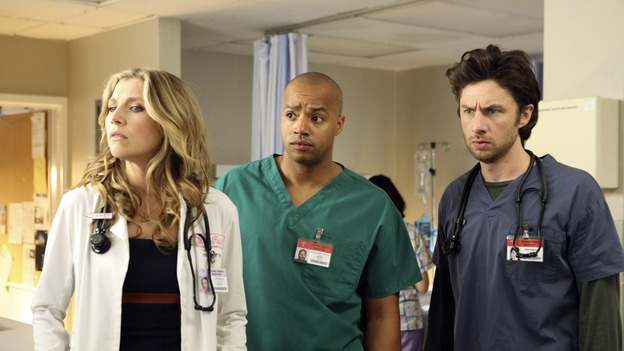 It also does reflect a problem in thinking critically about humor—and this is not just an issue at the 10-13-year-old age. I have developed several lessons at the university level regarding the nature of humor, theories of comedy, and attempt to present a critical pedagogy of humor. This could also be done for younger kids.

There is much more to be said for this project, but limited space leads me to conclude. Towards the end of the first workshop, one girl asked whether we could “hold the club” even after the second session. I was surprised that she would identify this as a “club,” but it makes sense—“just the girls” sitting around, talking about media, life, and getting intimate, giggling, and talking about silly quizzes to find out if you’re cool enough to hang with Hanna Montana. This was also evidenced at the end of the second session, when one of the girls suggested that they all sign each others’ journals. I was shocked. But I shouldn’t have been. Bonding is the stuff of girl culture. Which drives home the point that while of course there’s a necessity for media literacy programs to integrate Web 2.0 materials and technology, video and audio projects, even something as basic as a take-home journal and sitting around for a chat, can make small steps towards critical thinking about identity and media. Several of the girls commented that they had never really thought this much about TV or magazines, or really considered how different they were from their best friend, and were glad to have learned something about themselves. And that’s a good start.