May 28, 2009 Nadia White / University of Montana Leave a comment

The story of asbestos contamination throughout the town of Libby, Mont., was well told by mainstream media in the 10 years it took to put a criminal trial together to assess blame for the situation. But the contraction of the news industry in those same years meant that by the time the trial actually happened, there were fewer reporters available to cover the inquiry. Two University of Montana professors and 31 students created the Grace Case Project, a collaborative social media reporting effort, intent on filling that gap.

The Grace Case Project brought undergraduate journalism students and law school students together to provide gavel-to-gavel news and analysis of the criminal prosecution of the huge chemical company W.R. Grace Co. and several of its former executives. The project was a multifaceted experiment in complex criminal trial coverage and plowed new ground in several ways, demonstrating opportunities and challenges afforded large-scale, long-running coverage by a group of essentially citizen journalists.

The trial was emotionally charged, with hundreds of millions of dollars at stake. It was also a groundbreaking effort to apply the criminal provisions of the 1990 Clean Air Act amendments. The Grace Case team knew they’d be writing for two audiences: People affected directly by the pollution, and lawyers interested in the details of how this trial was prosecuted and defended.

The stage for the trial had been set by extensive coverage of the heart-wrenching tragedy of Libby. In the lead up to the trial, Kirk Johnson of the New York Times called the trial “A reckoning in one of American history’s worst industrial disasters.” 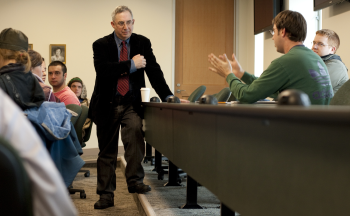 Reporter Andrew Schneider discusses the W.R. Grace criminal prosecution with
journalism and law students at the University of Montana.

Unlike the explosions that triggered the Chernobyl accident, for instance, Libby’s toxic exposures occurred over several decades. A mountain near the town was rich in a mineral called vermiculite that had a variety of industrial uses. But the ore carried a contaminant called tremolite, a particularly deadly form of asbestos.

Over the years, workers at the mine contracted lethal respiratory diseases from breathing the tremolite fibers. As they wore the dust home on their clothing, or brought vermiculite home to use as a soil additive or attic insulation, their families also breathed the dust and contracted cancer or asbestosis.

Contaminated vermiculite from Libby was shipped across the country and disease clusters showed up near plants that processed the mineral. Today, tremolite and other asbestos exposures are blamed for killing 200 people in Libby and sickening more than 1,000 others. In this close-knit town of 2,600 people there are families in which dozens of people have been stricken by related diseases. The trial, U.S. v. W.R. Grace, sought to assign blame for endangering people in the community and for keeping the dangers of tremolite a secret.

Grace Case Project reporters used a WordPress blog and Twitter to file updates every day the court was in session. The journalism students used new media to offer old-fashioned trial coverage and tell the story the jury was hearing. The law students used the blog format to offer analysis and explanation of legal strategy.

Journalism students filed a steady report via Twitter — 4, 561 tweets in all. Both law and journalism students posted summaries to the blog in two hour increments of trial coverage — eight posts in all for each full day of court, 310 for the duration of the trial. This was not, of course, the first trial covered using Twitter and blogs. Ron Sylvester of The Wichita Eagle pioneered trial coverage via Twitter. And a team of four bloggers with Firedoglake.com took collaborative blog coverage into federal court covering the trial of Lewis “Scooter” Libby. The Grace Case team built on those examples in size, depth and length – a bigger team, offering more analysis about a trial that ran longer than any previous live-blogged prosecution.

The trial ultimately ran almost three months – 35 trial days—and ended on May 15, 209, in across-the-bard acquittals. The blog hosted dozens of background articles written by Grace Case Project participants and links to additional coverage, evidence and outside legal sources. The lessons learned might be most applicable to interested groups intent on providing credible coverage of a long-running, compelling news story.

The students had very different sensibilities about how the trial might be covered, but shared a commitment to professionalism and informed objectivity that proved to be the spine of the project. Those shared values proved important in maintaining focus and building readers’ trust. Working with social networking tools made the project possible by making it affordable, easy to maintain, and easy for readers to access. Multiple modes of entry made the site accessible to a variety of users. The Twitter feed hooked those hungry for play-by-play coverage. Blog posts offered a more structured review of the day.

The decision to allow reader comments on the site was a natural one for the journalism half of the team, but gave pause to some on the law side. Ultimately, the readers’ community was allowed to flourish in a laissez-faire manner. More than 1,300 comments were filed and the conversation continues after the trial’s end. Reader comments fostered a cantankerous community of people intimately familiar with Libby and asbestos contamination. Their knowledge meant errors were quickly identified and fixed in a transparent manner.

This community, however, came to be dominated by a fairly small cluster of highly opinionated voices, which made it difficult for others to break in. Although the dialog was often circular, caustic and somewhat off putting, it did provide insight into the worlds of some people directly affected by Libby’s dilemma. The decision to use a single-subject social media-based site instead of a one-way web site posed challenges as well.

The Grace Case Project team chose to create a blog from scratch rather than hosting the project on an existing Web site, the School of Journalism’s site, for instance, or in partnership with a local news Web site or blog. That gave the team complete control over the project, but meant devoting substantial time to marketing in order to develop an audience from zero to 10,000 in 85 days.
Local media that considered the site competition refused to help build an audience or acknowledge the project. But smaller local papers or larger metropolitan papers — each without the resources to cover the trial — saw the project as a tool and were helpful in attracting readers. 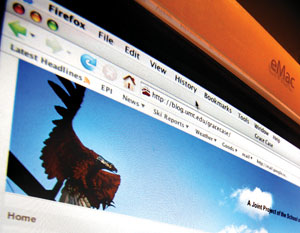 The local newspaper most closely covering the trial, for instance, refused to mention the project in its pages. It did, however, retweet scores of the project tweets, using a designated Twitter account with fewer than 10 followers, rather than the more popular newspaper’s own account or the account of its trial reporter. When pressed to explicitly credit the students’ efforts with a direct link to the site, the editor of the paper said she “Didn’t see the point” in doing that and chose instead to stop using the material.

The local papers in Libby, a small daily and a weekly, both ran material from the project in their paper and online, giving credit to the students and linking to the site. Similarly, the Johnson, the New York Times reporter, said he used the project to monitor the trial. He linked to the blog from one of his stories, as did major metropolitan papers across the country. Ultimately, it was Judge Donald Molloy, who presided over the case, who enabled the project. He accredited Grace Case Project reporters as part of the press corps and permitted laptops in the courtroom for the purpose of live blogging and Twitter coverage. Molloy had concerns that intense coverage of the trial on social media networks might lead to tainted witnesses, but said he was willing to give the experiment a chance. He hoped the public would benefit from a more transparent courtroom, and that the accuracy of coverage would benefit from including law students in the effort.

Anyone who thinks such permission from a judge has become routine need only to walk downstairs from the Grace trial in its final weeks. There, the judge in a high profile bankruptcy trial demanded a halt to all Twitter coverage of that trial after just one day of coverage. It was, he said, too much to ask that witnesses avoid reading such up-to-the-minute reports.