Whale Wars: A Deeper Shade of Green on the Public Screen
Chris Russill / University of Minnesota 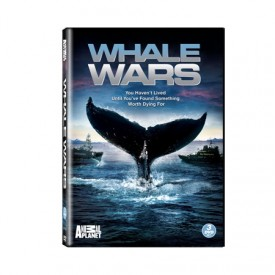 Have you seen Whale Wars?

I ask this question a lot. When someone answers “yes,” an interesting discussion almost always ensues. Opinion is polarized, yet I have noticed that people generally emphasize the dramatic nature of Whale Wars. Drama was evident enough in media coverage of the ‘hostage crisis’ and ‘chemical warfare’ events, which were covered in New Zealand and Australia media1, but also in my own retelling and use of clips from the show. I thought of Kevin Deluca’s classic study, Image Politics, and I picked it up again. On the opening pages, there is Paul Watson, the main protagonist of Whale Wars, sharing his views on media dissemination.

“The more dramatic you can make it, the more controversial it is, the more publicity you will get… The drama translates into exposure. Then you tie the message into that exposure and fire it into the brains of millions of people in the process.”2

Yes, Watson’s blueprint for building reflexivity about media into environmental activism is too simple. It captures his intention though. Deluca developed the results of these and other efforts to bring environmental activism to the public screen through a notion of “image events”: acts of social protest designed to shape public opinion through media dissemination. Image event participants are engaged advocates that are photographed or filmed during acts of protest, and Deluca saw them as “sophisticated media artists” worthy of serious consideration.3 Image events are generally disseminated in the form of news. Deluca examined television news broadcasting and he emphasized how its presentation style differed from most other television programming. Unmoored from our usual narrative conventions, image events often contain philosophical or argumentative fragments that provoke the underlying ideological and ritual associations we use to make sense of the world.4 Can a television show serve as the vehicle for an image event? Can it become one?

Animal Planet’s first season of Whale Wars follows the frighteningly inept crew of the Steve Irwin, a ship captained by Paul Watson. Watson is the founder and leader of Sea Shepherd Conservation Society, a direct action group that intervenes to stop whaling, sharking, sealing, and sea habitat destruction, in the most troublesome ways imaginable. Whale Wars focuses on the Sea Shepherd campaign to stop Japanese whalers in the Antarctica. These campaigns attempt to disrupt and disable industrial whaling ships by fouling their props, by hurling stink bombs onto their desks, and by crashing into them. Sea Shepherd has even scuttled whaling ships. Earlier this year, the Steve Irwin rammed an industrial whaling vessel, an event that was filmed for media distribution by both parties.

The campaign recorded for Season One of Whale Wars was not the Sea Shepherd’s finest moment. The crew got seasick, fell into the ocean, accidentally damaged key equipment, incurred injuries, and were ineffective in staying with the Japanese whaling fleet. Animal Planet focused on the personalities and problems of the crew, as much as they did on the whaling vessels or life in the ocean. We see more hangovers than whales. It is difficult to tell if Animal Planet envisions the show as reality TV, or whether the whaler’s ability to evade Sea Shepherd for long periods of time prompted a default to these conventions. It took a long time to sight a Japanese whaling ship, and only the stunning seascape, the ineptness of the crew, and the promise of direct confrontation hold our attention.

Season One of Whale Wars was notable for Watson’s use of new and more radical tactics. Once Sea Shepherd finally caught up with a whaling ship, the Yushin Maru, Watson sent two crewmembers aboard the vessel. The photographs and film of the boarding were quickly circulated by Sea Shepherd to media sources, accompanied by charges of kidnapping and hostage taking. The Japanese government claimed it was an act of piracy and terrorism. The Australian government was provoked to intervene and returned the two Sea Shepherd crewmembers to the Steve Irwin some days later. Emboldened by such successes, Watson was soon encouraging a night raid on a Japanese “spy” ship to damage its communication system, and another illegal boarding of a whaling ship by four female Sea Shepherd members. These decisions did not seem popular with the Sea Shepherd crew and the actions failed under somewhat curious circumstances. By the end of the season, Watson claimed to have been shot by the whalers.

Watson lives for such moments. His tactics are notorious, and Sea Shepherd is widely condemned for destroying private property and endangering human lives.5 Whereas Greenpeace speaks of “bearing witness,” Sea Shepherd undertakes direct action to stop industrial destruction of sea habitats. The organization is evaluated quite critically by reform oriented environmental groups, the International Whaling Commission, most nations, and, of course, the targets of Sea Shepherd interventions. More than a few people watching Whale Wars side with the Japanese whalers, and their opinion usually expresses revulsion at Watson’s tactics, not support for industrial whaling.

The discussion of Sea Shepherd tactics has its place. An illuminating one is found in the “We Are Hooligans” episode. Watson delegates a decision to two crewmembers regarding whether or not to attempt the incredibly dangerous night boarding and sabotage of a mysterious Japanese ship. The two men dialogue, debate, deliberate, and poll the rest of the crew, and they decide the action is too risky to the crew and to the Sea Shepherd’s image. When they take their decision to Watson, he disagrees. As the crewmembers raise concerns about gaining the moral high ground, winning public sentiment, having the agreement of the crew, and avoiding the perception that Sea Shepherds are ‘hooligans,’ Watson states, “we are hooligans.” The crewmembers smile, laugh a little nervously at their situation, and decide to stage the action.

Watson does not sail the globe in search of conversation, consensus, or deliberation. Sea Shepherd is about media dissemination,6 and Watson contrives situations to produce dramatic images toward that end. Most media reporting focuses on his tactics, or perhaps his personality. But why does Watson roam the high seas in search of photogenic trouble with an unpaid crew of amateurs? Pursuing this question leads to an interesting observation.

If the tactics of Sea Shepherd are radical and dangerous – and they certainly are – almost everything else about them is conventional. Their conservation mission is a typical one: “to end the destruction of habitat and slaughter of wildlife in the world’s oceans in order to conserve and protect ecosystems and species.”7 The organization is inclusive: You need only $100, a passport, and an ability to swim to join a voyage. Sea Shepherd issues press releases, gives interviews, and curries favor with like-minded celebrities. The smile produced by learning that McGyver and 007 sit on the Sea Shepherd’s Board of Advisors should not obscure the fact that conservation causes have long exploited celebrity. Moreover, Sea Shepherd cites laws and international agreements to defend their actions in public, not Edward Abbey, Derrick Jensen, or Star Trek IV. In short, it is the tactics used to generate dramatic media that distinguish Sea Shepherd, not their beliefs.

Most media sources describe Sea Shepherd as “anti-whaling.” A reliance on dramatic confrontation has reified the Sea Shepherd image in many people’s minds, and polarized the conflict between whalers and conservationists. During Whale Wars, Greenpeace complains that the dramatic hostage-taking stunt damaged their effort to influence Japanese opinion on whaling, and they are right. But I also wonder if the environmental melodrama might serve a different purpose.8 For all the tough talk and black flags, it is obvious that Sea Shepherd is not really at war, or simply about whaling. When they launch an action, the activists refuse to imperil the lives of whalers, even as they risk their own. When Sea Shepherd loses some crewmembers at sea, they radio the Japanese ship for help, and the whalers offer assistance. Nor does Sea Shepherd oppose all whaling. In the brief moments when Sea Shepherd volunteers share their beliefs on the public screen, they suggest vague connections between whales, ocean life, and the future of humans. To my mind, these examples and explanations evoke moments of a broadened sense of shared finitude, which is the experience motivating a wide variety of eco-centric thought. As they are juxtaposed against the dangerous Antarctic sea and the images of polarized human conflict, these fleeting fragments are surprising, yet that much more starkly illuminated as a result.

I was left wondering why such views require piracy and hooliganism for expression.9 What does it mean that ecological politics access the public screen as image events, or via a show filming their construction?