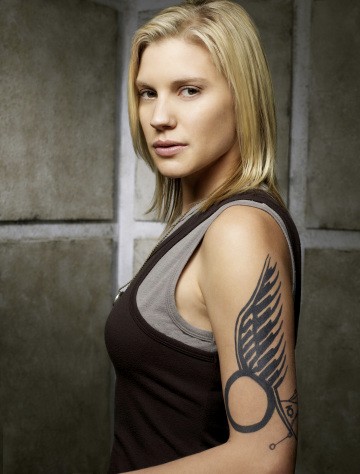 “Alright, this is really touching. Can we get the hell out of here?”
— Kara “Starbuck” Thrace (Katee Sackhoff), “Daybreak, Part 2,” Battlestar Galactica, March 20, 2009

Some historic finales have felt like endings. Maybe the moment calls for burning down the house, as in the precinct-charring finale of Hill Street Blues (NBC, 1981-87). St. Elsewhere (NBC, 1982-88) did an intertextual two-step, quoting MTM’s group hug and other classic farewells, and offering that none of this ever happened, renesting diegesis in the mind of Dr. Westphall’s (Ed Flanders) autistic son, aided by a snow globe containing a replica of St. Eligius Hospital. But some recent big last episodes have underscored the impossibility—even, the undesirability — of tying up loose threads in series marked by what Jason Mittell calls narrative complexity.1 The Wire (HBO, 2002-08) had it both ways, tidily putting some main players behind bars and others out of work, but concluding on a shot of Baltimore freeway traffic that, in a show that explored the circulation of power throughout urban institutions, read as a sign of business as usual. The Sopranos (HBO, 1999-2007) finale cut to black phenomenologically mid-scene, so that family saga went the way of an overdetermined pregnant pause, poring over menus in a diner rather than facing a jury or a hail of gunfire.2 Tony got his onion rings, but viewers, left to decode what must be the medium’s most-discussed edit, didn’t get closure.

Series running for multiple seasons must diverge from conventional literary or cinematic expectations of closure. Enacting narrative over the course of two or three or four hundred pages, or a feature-length film, is a beast, but concluding a narrative sustained over dozens, even hundreds of serialized hours is herding cats. (Consider the soap opera Guiding Light, retiring in September after 72 years on the air.3) Philip Roth’s pithy claim that “the novel raises certain questions and you know you’re finished when you have answered them,” hardly pertains to forms contingent on un-answerability, on day-to-day realism that may not plod in real time (not even on 24), but that promises to keep reminding us that, in serial drama as well as in life, most questions lead not to neat answers but only to more questions.4 Two recent final episodes reiterate that narrative closure is best achieved, in faithfulness to aesthetic precepts, in defiance of closure. NBCU siblings ER (1994-2009, NBC) and Battlestar Galactica (2004-09, Sci Fi Channel) both forestalled finality in favor of setting their literal stages, in ways large and small, for fresh starts.56 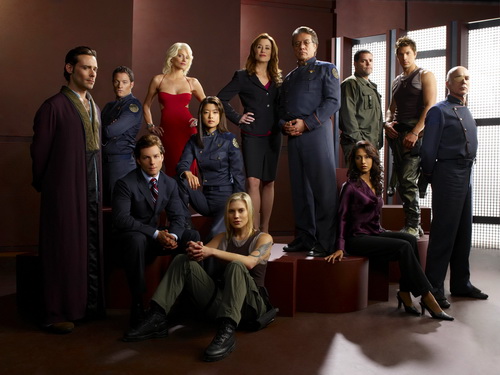 First, Sci Fi shuttered Battlestar Galactica (already a remake of ABC’s 1978-79 series of the same name) in grand epic style. Well, sort of shuttered: the franchise lives on, Star Trek-style, in Caprica, a prequel slated for 2010, with a pilot releasing on DVD on April 21, and The Plan, a backstory-elaborating made-for-TV movie to air in November. The finale spanned two weeks, with “Daybreak, Part 1” on March 13, and the two-hour “Daybreak, Part 2” a week later, preceded by a celebratory Last Frakkin’ Special. “Part 2” opens in flashback that goes, among other places, to a nightclub that makes the Bada Bing look like Cheers on a slow night, where William Adama, Sol and Ellen Tigh get wasted contemplating Adama’s retirement. But then the home planets known as the Twelve Colonies were nuked beyond habitability, and Adama went back on the job to command a ship carrying surviving humans—and super sexy robotic Cylons—across the universe looking for a new place to call home. The finale contained bang-up battles, a daring rescue, death, and disappearance (of Kara “Starbuck” Thrace, her human body having long ago been lost in space, and her angelic form having finished its mortal-coil task). Thanks to Starbuck, trucing humans and Cyclons made a lucky landing on an Edenic Earth-like planet, where denouement mashed up elements of Planet of the Apes and the Book of Genesis (or is it the Book of Mormon?) With an ending in the form of an origin story, resolution, for BSG, took the form of a new beginning. 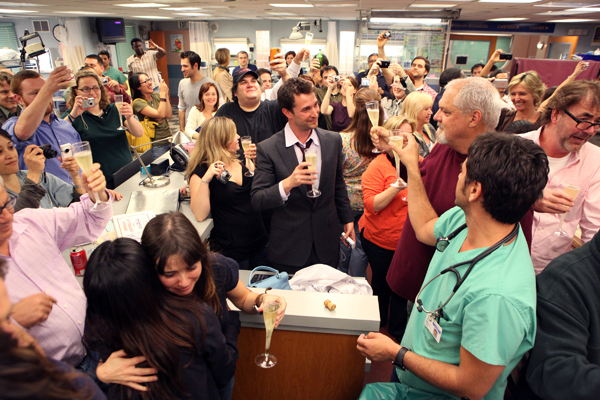 On April 2, on flagship NBC, ER was given an equally ceremonious goodbye. The obligatory ER Retrospective, and a two-hour episode “And in the End …” never quite jerked tears, though the series had been trying for months, writing previous stars back into the script, killing off a current character (Dr. Greg Pratt, played by Mekhi Phifer, in the final season opener “Life After Death,” September 25, 2008), and sending others off to new jobs. When husband-and-wife Doctors Luka Kovac (Goran Visnjic) and Abby Lockheart (Maureen Tierney) relocate to Boston, Abby makes the loveliest departure of all in “The Book of Abby” (October 16, 2008), embarking on a hospital-wide trek (think an edited Russian Ark, transposed to County General Hospital) that begins with a feisty defense of Nurse Sam Taggart (Linda Cardellini) at a disciplinary hearing, and draws to a close with Abby gliding into desk clerk Frank’s (Troy Evans) arms as he struggles to recall tango lessons in anticipation of his anniversary. After teaching him a step or two, Abby exits the ER, concluding a sequence of enviable grace carried by a character who sometimes struggled for balance.

Likewise, Dr. Neela Rasgotra (Parminder Nagra) leaves for a job reuniting her with Dr. Ray Barnett (Shane West), after breaking up with Dr. Simon Brenner (David Lyons), a character introduced in season fourteen in bed, waking from a threesome to hustle off to his first shift at the hospital. He eventually falls for Neela — and confronts memories of having been sexually abused as a boy. Brenner’s storyline, played most of the way out in “Shifting Equilibirum” (March 19, 2009), provided the single richest image of series’ wind-down. He arrives at his therapist’s office having just lost Neela, and linking, for the first time, his incapacity to sustain relationships to childhood trauma. His therapist asks, “How was your week?” In response, Brenner, shown in extreme close-up, covers his face with both hands, a gesture that typically connotes shame, evasion, self-protection. Here, the gesture contains not only Brenner’s profound and habitual ambivalences, but also sums up a skirmish between interior and exterior, A-plot of action and B-plot of character study, that motivated the entire series.

After embodying the series central conflict, the rest of Brenner’s appearances were peripheral. In the finale, his shift ends, and he goes on his way. The ER is notified that accident victims will arrive momentarily (which would have, in the spirit of endings as beginnings, occurred at the start rather than the finish of any other episode), and doctors and nurses assemble outside, as if for a class picture, minus Brenner. Although he had just reassured a new med student, shaky after losing a patient, that in the field of emergency medicine (and maybe serial TV, too), “you do the best you can, then … you come back the next day,” he wouldn’t return. A little death, a disappearance, and another chance to save the world, all in a day’s work, just like over on BSG. And next season? By July, Sci Fi will have rebranded as SyFy, a ludicrous non-name that bodes ill for its creative spirit. In September, in its own ironic lunge toward narrative closure on a network scale, NBC will begin stripping a Jay Leno-hosted show in the 10pm timeslot Monday through Fridays, cutting costs but bidding goodbye to drama-seeking viewers increasingly shifted to cable.