Jonathan Ross in Japanorama
“The hipster is an enfant terrible turned inside out” – Caroline Bird, “Born 1930: The Unlost Generation,” Harper’s Bazaar, February 1957.1

Japan has become increasingly ubiquitous in Western mediascapes over the past decade, partly as a result of the efforts of the Japanese media industries themselves, partly due to the “pop cosmopolitanism” of Euro-American audiences.2 Much has been written on the “Cool Japan” phenomenon, a co-production of Japanese cultural foundations and Western cultural critics who have repositioned “Japan” as one of the most desirable brands of the Western subculture industry.3 In contrast to the modernist Western imaginary of traditional Japan, with its zen gardens and tea ceremonies, this rebranded, postmodern Japan is imagined primarily as a subcultural space (even though many of its referents may be considered as belonging to the cultural mainstream within Japan itself) with manga, anime, popular music, street style, media crazes, and contemporary art all having been successfully marketed as alternatives to the Western cultural mainstream, generating numerous subcultural networks among Euro-American youth organized around anime, J-horror movies, or J-pop. Exactly why Japan has acquired cult status among Euro-American youth is a much larger question, but arguably relates in large part to the perception of Japanese culture as transgressive and hence emancipatory in relation to the strictures of Western “political correctness,” making it an ideal vehicle for the “oppositional taste” beloved of cult move fans.4

In the domain of television, Japan’s heightened visibility is most evident in anime, but also live-action Japanese shows repackaged for Anglo-American consumption such as Iron Chef, Takeshi’s Castle/Most Extreme Elimination Challenge, Ninja Warrior, or Unbeatable Banzuke, along with Western spoofs and spin-offs (Banzaï, or Iron Chef America). On British TV, meanwhile, a new generation of ostensibly “factual” programming focused on Japanese culture has emerged, including the Japan TV series (2000), Adam and Joe Go to Tokyo (2003), I, Samurai (2006), Dawn Porter… Geisha Girl, and Kelly Osbourne’s Turning Japanese (2009). The most prominent of these shows is undoubtedly the BBC series Japanorama (2002-2007), a half-hour show hosted by the nation’s favorite enfant terrible, Jonathan Ross, and produced by his company Hot Sauce Productions. Not broadcast in the US and not yet released on DVD, the show has acquired its own modest cult status among British fans: episodes are widely available on YouTube and a Facebook group recently launched to campaign for a fourth season.
[youtube]http://www.youtube.com/watch?v=myTvG39e3u8[/youtube]

Although Ross presents the show as the result of his personal predilection for “all things Japanese,” Japanorama can be seen as a rather transparent attempt to tap into the popularity of the “Cool Japan” phenomenon, and who better to do so than Ross? Prior to Japanorama, he produced several seasons of The Incredibly Strange Film Show (1988-89), a series on cult movie directors, while his three-part series Asian Invasion (2006) focused on the Japanese, Hong Kong, and Korean film industries. As the host of the highly rated chat show Friday Night With Jonathan Ross (2001-present), Ross has made his career as a provocateur, most recently in the scandal involving fellow celebrity Russell Brand which resulted in a three-month suspension. Japanorama gives free rein to this penchant for provocation via breezy discussions of anime porn, maid cafes, and the sex industry. In an episode from the second season of which Russ Meyer would be proud, Ross and a male companion recline their heads on vinyl pillows shaped as a female lap and a pair of breasts, crooning the otaku mantra, moe (a sigh of contentment). Cult-movie fans are likely to find themselves doing the same. 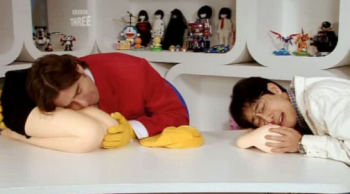 The problem is that Ross tends to treat Japan in general (or more precisely Tokyo, where most of the show take place and which it largely conflates with “Japan” as a whole) as a kind of walk-through cult movie. Much of the show focuses on movie genres, filmmakers, actors, or films themselves which have long enjoyed cult status among Western audiences, while the BBC cachet enables him to score interviews with Hayao Miyazaki, Mamoru Oshii, Nagisa Oshima, Takeshi Kitano, Hideo Nakata, and Takashi Miike. As I have suggested, however, not only movies but Japanese pop culture in general now enjoys cult status in the West, and like a live-action Pacman zipping around Tokyo, Ross wants to cover it all, interviewing Takashi Murakami and Yoshitomo Nara on contemporary art, Pizzicato Five’s Yasunaru Konishi on J-pop, or quizzing hip-hop entrepreneur Nigo (founder of the trendy Bathing Ape label) about his collection of vinyl action figures. Biker tribes, Harajuku girls, humanoid robots–no cult stone is left unturned. While many of these subjects will already be familiar to any fan of Japanese pop culture, Japanorama’s three seasons comprise a remarkably comprehensive catalog of aspects of Japanese popular culture which have acquired cult status in the West.

Whether otaku-spotting in Akihabara, explaining the anti-kawaii character Gloomy Bear, or riding a giant mechanical panda in an arcade, Ross exemplifies a figure I have come to call the hipster cosmopolitan, who of late has become ubiquitous in Western media culture. The hipster cosmopolitan is a far cry from the old-fashioned BBC travel-show host, embodied by the shambling and nostalgic Michael Palin: his natural habitat is the city rather than the village, the subcultural rather than the mainstream; he knows the cool global scenes; he is a night owl, spending the night partying and chowing down on street food, before stumbling, hung over, into the light of day. He is probably a DJ: Gilles Peterson, who hosts the BBC radio show “Worldwide” which favors Brazilian tropicália, Ghanaian high-life, or Nigerian juju, is a good example. He may have tattoos. On American TV, his most notable incarnation is the globe-trotting celebrity chef Anthony Bourdain. Most hipster cosmopolitans are white and speak English, and like the hipster brilliantly satirized in Blossom Dearie’s song “I’m Hip” (“I even call my girlfriend man”) they are usually male.

Hipsterism, as Norman Mailer observed decades ago, has always had a racial dimension, involving a white bourgeois appropriation of black cultural capital.5 More recently, John Leland’s book Hip: The History (2004) elaborates Mailer’s point, from white slumming in Harlem to contemporary suburban Americans who mimic African-American working-class identity and prefer hip-hop to rock music.6 As both jazz and hip-hop have lost their oppositional status and moved increasingly into the cultural mainstream, the value of their subcultural capital has correspondingly declined, requiring today’s white hipsters to look further afield. In a world of accelerating global cultural flows, this leads to hipster cosmopolitanism. It is perhaps unsurprising that Asian popular culture, and Japanese popular culture in particular, should have become one of its privileged objects, given the longstanding admiration of Black Americans themselves for Asian popular culture and vice versa, from the movies of Bruce Lee to Kanye West’s collaboration with Takashi Murakami.7 From this perspective, Jonathan Ross’s interview with Nigo, a Japanese hip-hop designer who has collaborated with African American hip-hop celebrities, becomes the quintessence of hipster cosmopolitanism.
[youtube]http://www.youtube.com/watch?v=1NafdlAjS5Q[/youtube]

Whether the value of Japanese subcultural capital will in its turn decline as Japanese popular culture moves increasingly into Western mainstream media remains to be seen; but it is likely that the subcultural frontier will shift again, perhaps to Africa, where Nigerian popular music has long been a pole of hipster attraction and its digital video industry has also been attracting the BBC’s attention. Meanwhile on American cable TV, a pair of Brooklyn-based hipster cosmopolitans have proposed an even more remote destination in the continuing mission to boldly go where no fan has gone before. While New Zealand might seem an unlikely hipster destination, in the logic of hipsterism its very squareness makes it paradoxically cool. Wellington as the new Tokyo? Brett and Jemaine’s number one hipster-groupie Mel would certainly think so. 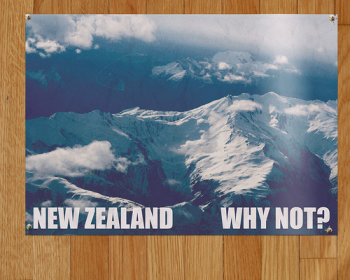 The Next Hip Thing?