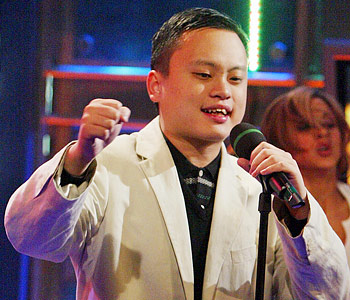 William Hung Belts it Out

What makes a loser a winner?

In many reality shows, competition is the driving narrative force–the goal of the show is to choose the best singer, dancer, chef, designer, or date. On competition shows (or gamedocs) the season culminates with an individual winner walking away with grand titles such as Canada’s Favourite Dancer, America’s Best Dance Crew, or Australia’s Next Top Model. Besides prominent titles, winners receive loot such as a million dollar cash prizes on Survivor, recording contracts for Idols, or Project Runway’s coffers to start a clothing line. Each show has only one winner, with much ado made about him/her and his/her selection. But what happens to the losers?

In addition to the selection of the winner, many shows are highly invested in the spectacle of the competition itself, and of the ritual casting away of the losers. A range of language and gimmicks is used to ritualistically whittle down the cast to the last (wo)man standing. Hosts weekly use such phrases as “booted off,” “eliminated,” “sent home,” “voted off,” “evicted,” or curtly tell contestants “you just don’t measure up,” “auf wiedersehen” or “you’re fired!”

Some “losers” win money—Survivor and Big Brother runners-up win cash prizes. Other “losers” appear as celebrity guests on other reality shows (such as Project Runway’s Santino’s guest stint as a judge on RuPaul’s Drag Race), while others still, such as Real World Hawaii’s Ruthie Alcaide, tour college campuses speaking about topics like alcoholism and diversity. Quite a few shows, such as Flavor of Love, create spin offs featuring losing contestants. Part of VH1’s slate of “celebreality” programming, Flavor of Love has created a total of seven shows—the original plus six spin offs, airing several seasons each of reality TV “losers.” Many reality contestants capitalize on their “exposure” on reality TV to launch various entertainment careers. 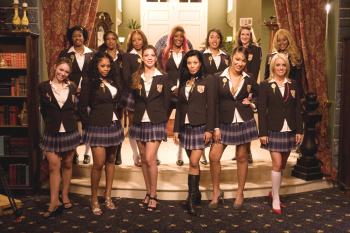 The Girls of Charm School: Rock of Love

Losing has been incorporated into the success of American Idol in a comprehensive way (a programming model increasingly followed by other programs, such as So You Think You Can Dance). The show has been able to double the length of the season by airing the nationwide traveling auditions, Hollywood semi-finals, the final 36, and the final 12, all before the “real” competition between the final 10 airs. Needing to fill so many hours of programming, the series not only showcases a nation of talented contestants, but also highlights and even encourages embarrassing and poor auditions—some of whom are simply deluded about the level of their talent, while others hope to infiltrate the program with particularly bad singing, swear words, crazy outfits, or other bizarre schticks, with no hope of actually making the final group. The number of “joke” auditions seems to be on the rise, with people seeking self-promotional opportunities at every corner. In the current season, Nick Mitchell and his stage character Norman Gentle, an odd-duck contestant, made it very far in the competition, with Simon Cowell referring to his performance style as “horrific comedy”:

In fact, many audience members watch the audition episodes to see the “losers,” even moreso than previewing the potential winners. Thousands of YouTube and other vlog postings feature the worst auditions, viewer comments attached. Even Idol itself counts down the “top worst auditions” of the season.

In this clip, host Ryan Seacrest bemoans, “Dead last, out of 10,000 hopefuls, Jennifer’s rendition of ‘Genie in a Bottle’ left us hoping someone would put a cork in it:1
Simon: Jennifer, here’s a new word: that was extraordinary.
Jennifer: Thank you!
Simon: Unfortunately, extraordinarily bad.
Seacrest: Ouch.2

The witty judges’ “rejection” banter has become a trademark element to Idol.

Is the rejection all just fun and games, though? William Hung, from American Idol season three (in 2004) is an interesting case. An American engineering student originally from Hong Kong, Hung unsuccessfully auditioned before the judges in San Francisco. Known as the “Hong Kong Ricky Martin,” Hung has crafted a career out of being an American Idol reject. He has sold over 240,000 CDs globally,3 toured Singapore, Malaysia, Taiwan, has appeared as a keynote speaker at graduations, and has wallpapers and e-cards available on his website.4

His loser-success, however, must be examined in more depth. On Idol, Hung entered wearing a Hawaiian print shirt, slicked back hair, buck teeth, and thick glasses, and began singing Ricky Martin’s, “She Bangs.” His uncool appearance, accent, and awkward dance moves began. Rather than stopping his act after the first line, the judges allowed him to continue, at once humoring themselves at his inability to deliver a convincing pop star performance, and creating content for the weeks of audition programs. Simon rolls his eyes and rubs his forehead in frustration. Randy Jackson covers his face with a piece of paper, his body visibly shaking with laughter. Paula Abdul bounces her foot while she smiles and makes eyes with Simon. After Simon silences Hung, Randy continues to chuckle.

Simon: You can’t sing, you can’t dance. So what do you want me to say?
Hung: (pause) Um, I already gave my best. And I have no regrets at all.
Randy and Paula: Good for you. That’s good.
Paula: That’s the best attitude yet.
Hung: You know, I have no professional training. Of singing. Or dancing.
Simon: No! Well, there’s the surprise of the century!5

In reality, his singing wasn’t as bad as Jennifer’s, above. So why, then, has William Hung been granted such fame? It is clear that Hung’s infamy, as the Hong Kong Ricky Martin, is performed and discounted vis-à-vis racialized and sexualized discourses. Much like the contrast illustrated with So You Think You Can Dance’s Tranji,6 and the Black hip hop sexuality vs the white nerd , the Hung example positions as opposites the suave and sensual Latin lover and the asexual Asian nerd.7 Hung’s inability to personify the Latin lover role marks his failed or impotent masculinity, and marks this impotence as “Asian.”

Stephanie Greco Larson (2006) writes that ridiculing the Asian nerd has historically functioned to assuage white fear: “laughing at these characters diffused the competitive threat that whites felt at that time from high-achieving Asian Americans. White viewers were invited to continue to feel superior to these ridiculous characters.”8 In this move, humor detracts from political stakes. Hung’s accent and non-native use of the English language function as points of racist humor in this clip, and in his ensuing “success.” Says one college student after buying the Hung CD, “Hung had an accent that made ‘Hotel California’ sound priceless”.9

These elements work together to remind Hung and his Asian counterparts that in order to win a pop contest, one must lose the accent, the outfit, and conform to a standard of sexualized masculinity, in this case, the stereotype of the Latin lover, in order to woo women. Otherwise, the impotent sexuality of the Asian nerd prevents his success. Ironically, the Latin lover image failed for recent Idol contestant, Jorge Nunez of Puerto Rico. Nunez was told he was too Latin—his Puerto Rican dancing was laughed at and condescended to, and his Spanish accent was decidedly “too thick.” After being sent to accent neutralization classes so that his singing voice sounded more English, Nunez was voted off the program around the same time Tatiana Del Toro (also originally from Puerto Rico) was accused of “faking” a Spanish accent to get the same attention given to Nunez. 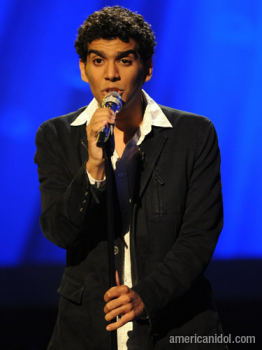 Jorge Nunez Performs Before the Judges

Hung as Asian minstrel does not play to all audiences, however. An online poll asks, “Is William Hung’s appeal rooted in racism?” The answers break down as follows:
Yes, he plays to an enduring, ineffectual anti-Asian image–40%
No. He bangs!—41%
That’s for William to decide—11%
Can’t we all just sing along?—8%
Total votes: 274710
The results of this survey suggest that the audience response to Hung’s performance and celebrity is fairly divided, but if you aggregate the answers, many more people continue to laugh off this persona and the issue of racism; only 40% see his success having to do with racism.

Why is that? Some writers have pointed to the growth of “the cult of bad art” such as these reality TV losers, as “an invitation to escape the formal boundaries of adulthood and be a child, delighting in the rude and raw.”11 This may be an explanation for why people love to watch Jackass or blow up TV remotes in the microwave, or even to love to hate “bad” acts such as William Hung. Idol fansite Vote For the Worst takes the cult of bad art very seriously, attempting to critique the commercial nature of reality TV and the music industry by organizing votes to support the worst contestant.

However, when “bad art” is defined along racialized lines, one cannot escape the racist element of loving to laugh at the Orientalized Other. Similar discourses can be seen elsewhere on reality TV. Flavor of Love women are racialized as “ghetto”—Black, low class, and are humiliated as such, with one woman actually defacating on the floor and another spitting in her competitor’s face. Bret Michael’s Rock of Love women are represented as “stripper trash” losers—not being able to “work a pole”; or working a pole too well without admitting to working as a stripper, can lose the game.
The political economy of reality TV celebrity is such that even a loser becomes a winner as s/he is cycled through the celebrity mill, as the incessant churn of promotional culture expands the ever-growing D-list. Or should we call it the L-list—the Loser-list.

Image Credits:
1. William Hung Belts it Out
2. The Girls of Charm School: Rock of Love
3. Jorge Nunez Performs Before the Judges