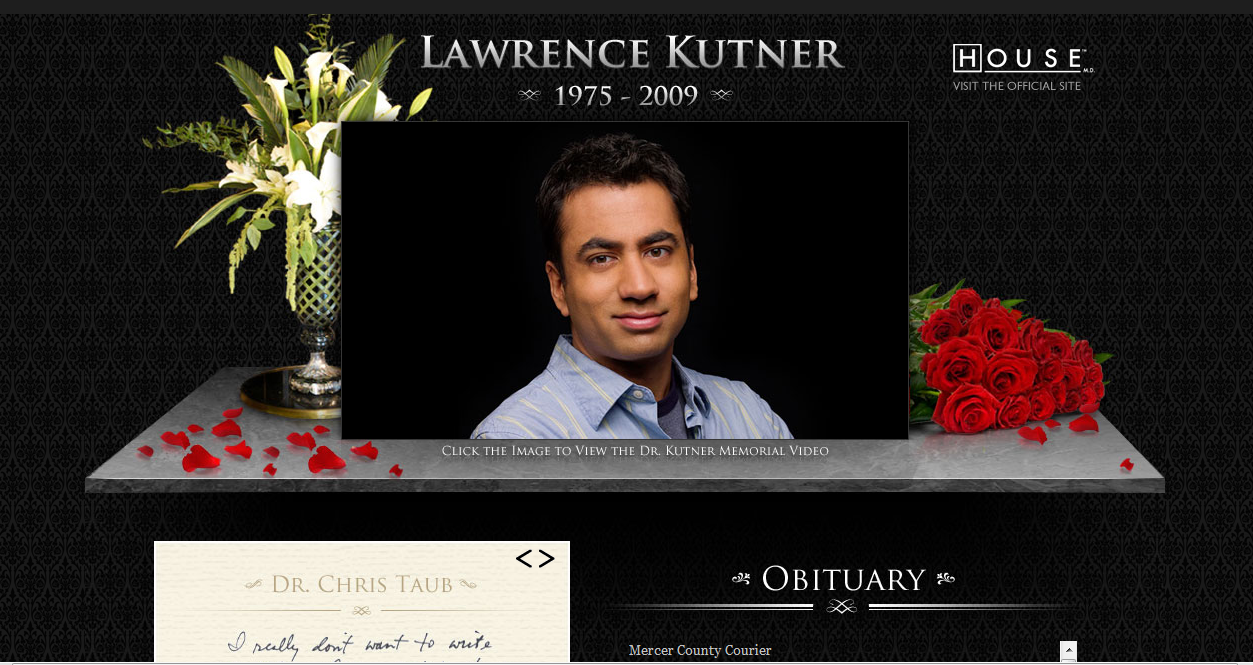 Even if you don’t watch House, MD, it’s quite possible you’ve caught wind of the “shocking” episode from April 6, in which Dr. Kutner (Kal Penn) unexpectedly committed suicide. At the end of the episode Fox displayed a PSA-style ad for NAMI (National Alliance on Mental Illness) and then encouraged viewers to visit a virtual memorial set up in Dr. Kutner’s honor. I was completely fascinated by the idea of a network sending viewers to a virtual memorial after the death of a fictional character and I had to check it out. Within minutes after the show’s original broadcast a virtual memorial on Fox’s website was setup in honor of Dr. Kutner,1 complete with images, a memorial video, an obituary, and even “hand-written” letters from other characters on the show (written in the voices of the characters).

However, I curiously noticed the lack of any and all advertisements or Fox promos on the site, not even an inconspicuous banner was present. By removing any advertising was Fox actually trying to create a sombre and respectful virtual memorial in honor of the recently deceased Dr. Kutner? Were they attempting to create and facilitate more paratextual hype for the show?2 Was this merely a way to acknowledge and encourage fandom? This just didn’t make sense; Fox had to have a commercially-driven motive for the memorial. At the bottom of the memorial there was a link that encouraged users to leave personal messages for Dr. Kutner. The link took users to a Facebook Page (not profile) called “In Loving Memory of Lawrence Kutner”. The page included many of the same features as the virtual memorial, but with the addition of discussion boards. I was shocked to discover over 3,000 people had become “fans” of the page just twelve minutes after the end of the episode (a number that quickly rose to over 32,000) and hundreds of people were indeed leaving messages for Dr. Kutner.

This all seemed very strange, both on the part of the fans, but even more so from the network’s perspective: In other words, what was Fox hoping to gain from the memorial? In an ever-changing media environment in which broadcasters are struggling to gain and retain viewers (and thus advertising dollars), many shows are attempting to further engage audiences with the narrative through increased opportunities for interactivity. However, rather than focus on the fandom aspect of the memorial and Facebook Page (albeit fascinating), I want to consider the ways in which the Facebook Page actually proved to be a rather innovative, yet distinctively ad-free, example of convergence marketing that connected Facebook back to on-air advertising.

When Facebook launched its new interface in February 2009, it not only changed the features of the personal profile pages and the news feed, but it also changed the design and function of Facebook Business Pages, which are public pages intended to be used by businesses, bands, celebrities, artists, brands, etc. The newly designed Pages were still free to use, but now functioned more similarly to personal profile pages. They included the same “tabbed” features of personal profile pages which now allowed the administrators of Pages to leave wall posts on the Page and therefore further encourage interactivity between the brand and the fans. Also admins could now update their statuses (short news blurbs) in order to more frequently communicate with fans. In so doing, Facebook Pages became integrally incorporated into users’ news feeds and personal profiles just like any other profile, thus increasing the Pages’ visibility and virality. 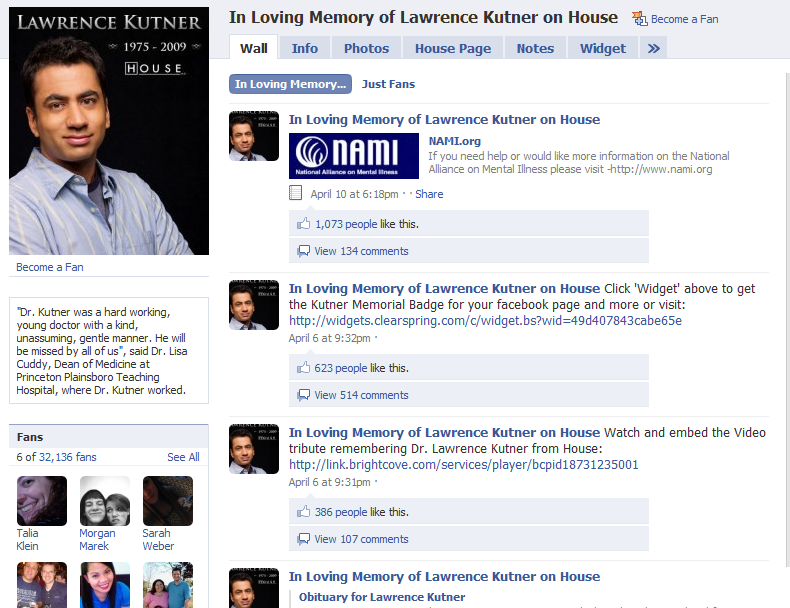 For example with the “In Loving Memory…” memorial page, every time a user became a fan and/or left a comment on the page, that user’s entire Facebook network was made aware of the action and thus of House. And certainly users are aware of this as one individual on the memorial discussion board expressed, “Your profile appears on my page ten times so ten times over you should have stayed on House”. Of course social networking site advertisers are also completely aware of this and are even dependent on these kinds of viral interactions in which the users “do the work for them” (of spreading the word about a particular show,brand, or product). Certainly creating a space for House fans to engage with the characters and the narrative in a public and visible manner is a good promotional decision in and of itself. Presumably though, the ultimate goal is not to merely create online buzz about House or a particular episode since this kind of marketing does not necessarily generate more advertising dollars. In other words, there had to be a way to connect this form of marketing back to the on-air advertisers, the life source of the show.

“Powerful reporting and insight tools are provided free to Page Admins. On a cumulative and week-over-week basis, these granular reports will measure reach (e.g., impressions, clicks), viral impact (e.g., fan adds), responder insights (e.g., gender and age), and engagement (e.g., video plays and wall posts) of visitors to the Page. One advantage of using the applications designed by Facebook is the ability to receive these free, regular, detailed updates on the growth of the page.”

“Responder insights” apparently refers to the demographics of the Page’s visitors (regardless if they actually become a fan of the Page or not). It comes as no surprise that Facebook and businesses are tracking users’ behaviors and demographics, but this becomes increasingly relevant in the case of Fox. I want to go back to the beginning of all of this in order to more fully articulate and appreciate the dyadic relationship between the Facebook Page and Fox’s on-air advertisers.

Actor Kal Penn decides to take a job at the White House working for the Obama administration and thus needs to leave the show.3 The writers then have his character unexpectedly commit suicide;4 the episode leaves many questions unanswered, both for the characters and the audience. Knowing the unexpected death of a character would evoke a strong emotional reaction from the viewers, Fox was able to capitalize upon this narrative strategy by encouraging fans to interact with each other in a designated virtual space. In a wise move, the producers direct viewers to a virtual memorial rather than directly to a Facebook Page. Arguably the virtual memorial aroused greater curiosity than a Facebook page would have had it been advertised at the end of the episode. However, in order to create an ambiance and mood, Fox also wisely chose not to clutter the memorial with advertisements or discussion boards (which would have felt like a marketing move rather than a legitimate memorial and/or fan space), but rather redirected fans from the memorial to a Facebook page. Entering the Facebook Page in this less direct manner probably felt less “cheesy” or corporate-driven than it would have had Fox simply encouraged viewers to go directly to Facebook. 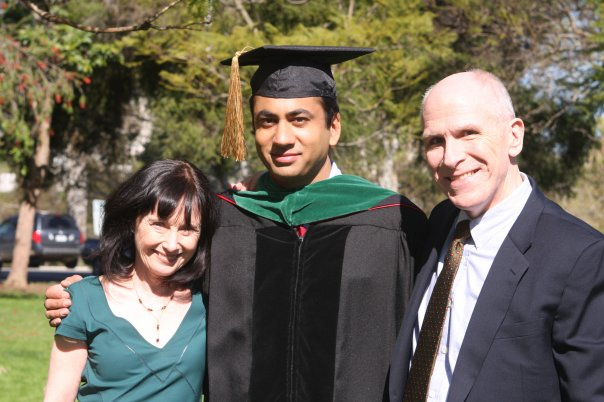 Once users were on Facebook however, Fox was provided with an instant demographic snapshot of House viewers – their gender, age, location, sexuality, and probably even their political and religious affiliations (since all of this information is privileged as “basic demographics” at the top of a Facebook profile). It is important to note that this snapshot is of course limiting and limited (by those with computers, internet access, and maybe a higher level of fan motivation), but nonetheless extremely valuable to Fox. While Nielson ratings, focus groups, and other market research certainly provide insight into who is watching House, the “In Loving Memory…” Page operates in a similar yet even more direct manner. And so we come full circle: While the demographic information collected via Facebook may not necessarily earn money within Facebook it can be used to sell more market-specific on-air advertisements.

While we are all aware that Facebook is selling our demographic information to marketers, I think it is interesting to consider the ways in which television is also capitalizing from the convergence of social media such as Facebook. While Dr. Kutner’s virtual memorial and even the Facebook page may feel like a “genuine” or “authentic” fan space, due to the lack of visible advertisements as well as the “organic” feel of Facebook, a closer analysis demonstrates the ways in which networks are perhaps becoming more savvy purveyors within convergent environments.