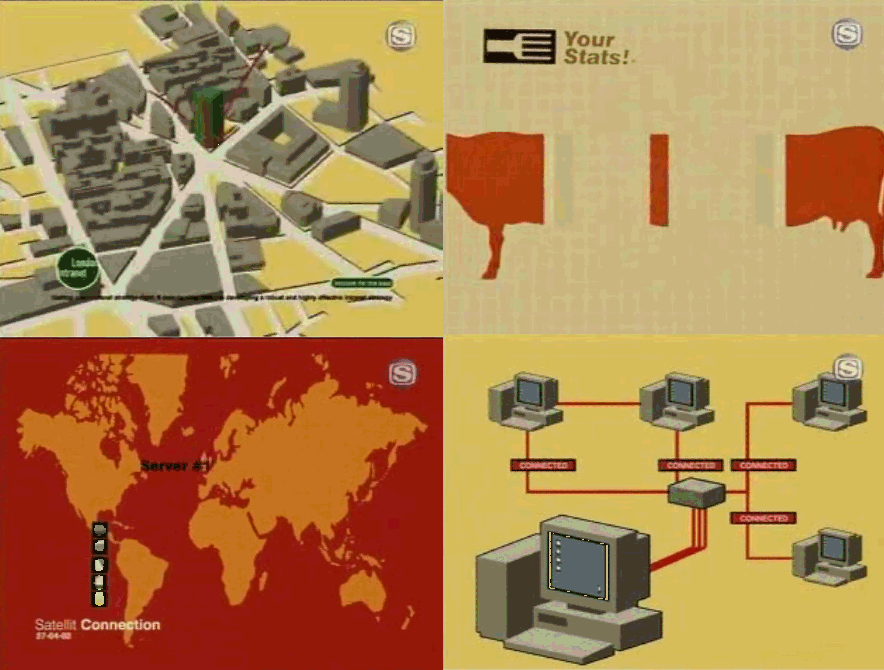 Rock Out to Röyksopp’s “Remind Me”

The music video for Röyksopp’s song “Remind Me” from their studio album Melody A.M. (2001) follows a day in the life of a woman who works in the information technology offices of a company housed in a central London skyscraper. Röyksopp, a Norwegian electronica duo, was formed in Bergen when Torbjørn Brundtland and Svein Berge reunited years after they had stopped experimenting with composing as schoolboys in the town of Tromsø. But as the plaintive lyrics of “Remind Me” indirectly indicate, music made in Norway and the artists who made it would only be heard outside Scandinavia if they got noticed by those executives, label bosses, critics and reviewers in London who wielded the most power to make music audible to a pan-European audience and to North American ears. Indeed, the reason I discovered Röyksopp’s work was because the duo is signed to Astralwerks – a label specializing in alternative rock and electronica that was purchased by Virgin and later became a part of EMI when the conglomerate purchased Virgin.

Thus, Röyksopp’s music alludes to the ways that the culture industries work to make music scenes visible and to construct music’s ties to place and travel. Röyksopp’s music, born of Bergen, found its way to my ears in Madison through the mediations of London-based music firms and a bevy of critics. Digging deeper into the animated video for “Remind Me,” however, reveals another tie between Röyksopp’s electronica and spatial understandings. In the video, we follow the various vectors of movement one woman takes through suburban and central London as the music overlays the rhythms of a workday, data visualizations of world markets, and statistics on how many Londoners walk, drive, take the bus, or catch the train to work. Remind Me links the engineered sounds and plaintive lyrics that emphasize travel, memory, and affect with various ways of mapping movements within the city and understanding the ways in which modern urban life relies on a multitude of systems and technologies – such as sewers, electricity, and communications infrastructures – that are largely taken for granted.

Röyksopp’s Remind Me highlights two issues surrounding music’s connections to place. First, musical sounds, styles, genres, and the performers who popularize them emerge in specific places, but the travel of specific sounds and performers to a national and/or international audience depends on critics, label bosses, bloggers, scholars and/or dedicated fans who work to construct and define the relationship of the music to place. Critics, musicologists and popular music historians have examined the conditions under which musical forms such as Detroit techno, Chicago house, New York garage, London grime, Seattle grunge, Memphis blues, Kansas City jazz, and Atlanta hip hop have evolved, traveled, and influenced other genres.1 While it might appear to the casual observer that networked and mobile mediations of popular music work to wrest musical performances, performers, and styles from any ties to location, experiments such as Vincent Moon’s La Blogotheque and Hidden Fruit’s Black Cab Sessions illustrate that articulations between place and music remain vital, even if site-specific listening practices have turned into the “site-unspecific” practices Max Dawson has chronicled in relation to U.S. television.2

La Blogotheque and the Black Cab Sessions feature musical performances primarily in Paris in London, offering performers a new way of promoting their records and new ways of imaging musical performance in both networked and particular places. On one level, La Blogotheque and the Black Cab Sessions challenge the traditional ways of visualizing genres such as indie rock. Music video scholar Carol Vernallis argues that videos for alternative bands emphasize interior and domestic settings associated with the middle class suburban locations that the largely white producers and listeners of such music wish to escape from. Vernallis writes, “In alternative videos, one might see a small, boxy set, built in a studio or warehouse, covered with murky green wallpaper, and decorated with shabby furniture. The run-down look of these settings underscores an interest in rawness and spontaneity and an ambivalence about such practices as writing attractive, accessible hooks. Alternative groups are typically imagined to play in low-rent spaces, like garages and small clubs, and these sites become associated with specific musical practices.”3

La Blogotheque: Music in the city

Rather than the cramped domestic spaces of middle class suburbia, La Blogotheque and the Black Cab Sessions illustrate movements (even if bounded) within the city as well as within the decentralized geographies of networked infrastructures and the fixed and mobile viewing settings of web users. La Blogotheque’s shows take us out of the living room and into the streets of Paris. Frequently, pedestrians move around the performers, carrying shopping bags and other items as they run errands, or entering doorways that are partially blocked by musicians from bands such as Lambchop. A roving camera tries to capture musicians who wander around the exterior settings as these performers offer viewers glimpses of Parisian neighborhoods.

Occasionally, these Take Away Shows parody and satirize music video depictions of alternative bands. For instance, New York-based neo-folk band Grizzly Bear performs “Shift” in a tiny Paris apartment bathroom, with most of the band squeezing into the shower, a performance that carries the cramped interior setting trend to a point of absurdity.

The very choice of the name La Blogotheque – a name for a piece of new media real estate that brings to mind the offline and increasingly endangered species of the discotheque – also highlights the increasingly sterile sonic urban landscape while artists, camera operators, and Vincent Moon try to reintroduce sound into the city. LCD Soundsystem laments that New York City is not the same in “New York, I Love You But You’re Bringing Me Down,” CBGBs is now a John Varvatos store (where you can relive rock history while browsing at $2000 jackets), and the prospect of soaring ticket prices from a Ticketmaster-Live Nation merger point out that live engagements with popular music are not what they used to be. In the context of the sanitizing impulses of urban gentrification, experiments such as La Blogotheque’s Take Away Shows try to re-imagine the urban soundscape. 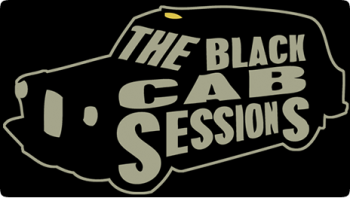 Confessions of the Music Kind

The Black Cab Sessions’ slogan of “one song, one take, one cab” attempts to establish the ways that these performers are simultaneously relatively un-mediated and hyper-mediated. 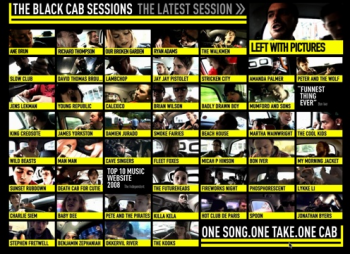 A Great Lineup on a Small Stage

Each performance foregrounds the presence of the cab driver as emcee and features a consciously pared down version of the song (how many band members and instruments can fit in the back seat anyway?). The performers compete with the sounds of the cab itself and the bustle of London traffic.

Visually, passersby can be seen in the medium shots that frame performers, and the camera occasionally moves to capture specific features of the outside space (street signs, landmarks, or intersections). The last shot mimics a passenger’s POV through the back window of passing buildings and blocks, further emphasizing the articulation between music, place, and mobility that occurs within one of the most overdetermined symbols of British travel.

Even as networked and mobile technologies are seen to challenge the particularities of place, the efforts of programmers and artists to insist that urban locations matter, to remember and to reassert the particularities of place, and to circulate these sounds need to be considered. Given that the success of La Blogotheque and the Black Cab Sessions relies on sites such as dailymotion and youtube and mobile devices such as the iPod, it would make sense to also think through the ways that the dynamics of what Henry Jenkins has termed “spreadable media” impact the connections between sound and place.4