Spinning off, crossing over
Jane Feuer / University of Pittsburgh 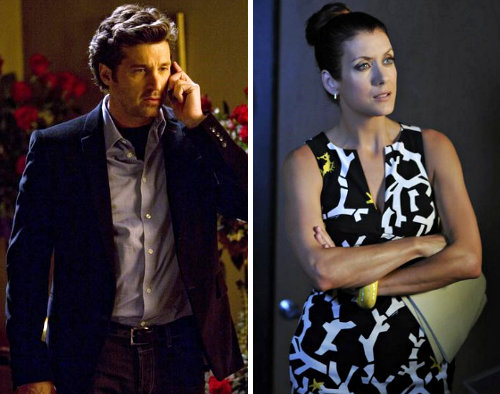 I would like to explore the applicability of the concept of diegesis to television drama through some speculations about the recent Grey’s Anatomy/Private Practice crossover on ABC in February, 2009.

A difficult to pronounce word, Greek to some, the term diegesis became standardized in film studies through its usage in the Bordwell and Thompson Film Art textbook. Non-diegetic sound is sound whose source is outside the realm of the narrative. Diegesis , then, refers to whatever is inside the world of the narrative. I can recall a much earlier usage of the term by Peter Wollen. Writing about Godard, Wollen wanted to capture that which was expressly NOT classical Hollywood narrative and he used the term “multiple diegesis” to refer to the breaks from narrative realism in a film like Weekend. I borrowed Wollen’s term to describe dream sequences in musicals and also on TV. The word here evokes a particular strain of modernism, an attempt to dis-unify the smooth realism of the text. (This also at a time when references to Brecht and distanciation were everywhere).

I always thought we could learn a lot about television by thinking it through in terms of diegesis. The whole concept of flow– which is so definitional of TV that this journal takes it name from it– was used by Raymond Williams to capture a sense of the lack of the diegetic in television’s sequencing. And yet we’ve always gone on the assumption that there is a strong diegetic unity to a particular television series, as in the term “Buffyverse.” So we have come to regard television as a world in which the diegesis is porous but present. Intertextuality is the norm. And therefore the word “crossover” is somewhat redundant. Crossing over is a norm of American television, where an entire genre—the talk show—exists for the promotion of other forms of entertainment. 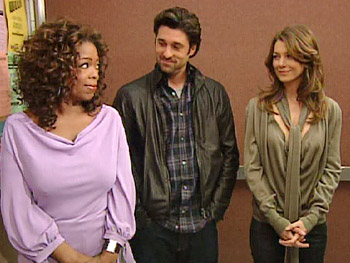 Another variation on the crossover: Grey’s stars on Oprah

Spinning off is the process by which a popular show gives birth to a newbie which may or may not resemble the parent. In the case of Private Practice, there is a strong family resemblance in content but not in tone. Both shows have the same author—Shonda Rhimes—yet the melodramatic excess that created pathos in the original show turns toward the ludicrous in the spinoff. As in all melodrama, the premise is likely to be ridiculous, in this case the idea that “conflict of interest” has no meaning. This is where the concept of diegesis comes in. Grey’s Anatomy—at least for its numerous fans—is able to counter its astonishing lack of realism through the strength of its fictional enclosure. The incestuous and multiple liasons among cast members can be sustained only through a suspension of disbelief, a willingness to take the ridiculously jumbled liaisons at a metaphoric level. This requires an attitude common to the acceptance of much television (melodrama), an “I know it’s silly but I’m moved nevertheless.” As a Grey’s fan, I often find myself drawn into the diegesis to the point where I become engulfed in its reality. I was even willing—with a healthy dose of irony—to accept the Denny’s- return –as- a -ghost storyline—for the reason that I liked the intensity that is provided for the two lovers to be together again. (How more or less ‘realist’ shows get us to accept the supernatural is another interesting topic.) Blogged opinions about Denny were mixed, but those who were willing to go with it seemed to agree with me that extra-diegetic reasons figured in their acceptance i.e. an opportunity to see Katherine Heigl display her movie-star luminosity.

Yet the bloggers also agree that Private Practice is not worthy of the talents of the Grey’s star whose move to LA spun it off. What succeeds as melodrama in the parent show comes across as a kind of bad taste in the mouth in the spinoff. The characters are equally intertwined but just not likeable. Bloggers frequently express the wish that Private Practice would collapse and allow Kate Walsh to return to the parent show. So the crossover was supposed to grant this wish, and in the process serve as a ratings stunt, which apparently it succeeded in doing. 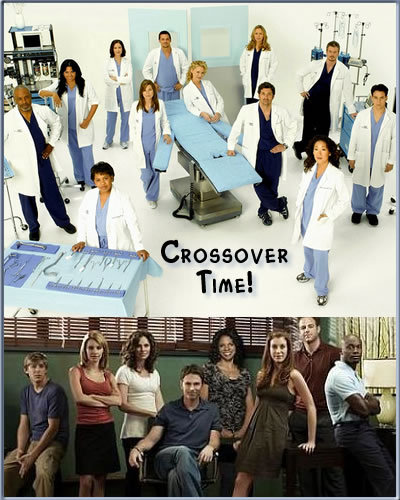 I would like to focus on the central episode of the crossover—the Feb. 12. 2009 episode of Grey’s Anatomy—as the most compelling instance of the diegetic clash occurring as Practice invades the parent show. For me the most fascinating element—other than the worm and cyst brain surgery—was the attempt to create a backstory involving the med school classmate-chums that span both shows: Addison, Derek, Naomi, Sam and Addison’s brother Archer, thus creating multiple groups of med school classmates ranging from the original cast of Grey’s to the current group of interns featured in a scavenger hunt on the crossover, not to mention the backstory involving the senior Dr. Grey and the Chief in earlier years. This makes the world of the hospital into a rich, multi-generational, deeply and incestuously interwoven diegesis that transcends any particular part of the whole. The hospital as diegesis functions similarly in many of the outstanding medical dramas of the past, from St. Elsewhere to ER. Television’s technique of continually adding backstory serves well in this type of inter-diegetic creation. In this episode there is a faux nostalgia about a past that is created almost entirely for the purpose of the crossover. The fact that Naomi is currently seeing Archer on Private Practice and that her ex-husband Sam shows up on the episode gives a modicum of believability to the idea that the whole group once attended Derek and Addison’s wedding for which Derek wrote an anatomically versed song. Indeed the central scene of the crossover episode occurs when the group adjourns to a bar after the surgery and nostalgically mines said tune. The diegesis thus created pulls the audience into a reunion of a past we’ve never witnessed but one that crosses over both shows, thus spanning the individual narrative world of each.

I am not going to say whether the crossover was aesthetically successful or not. I just wanted to explore the complexity that a diegesis can achieve through perfectly normal TV narrative technique. It does not require anything special to achieve thickness and richness within the world of TV series narrative.