Michael O’Donoghue, SNL, and the Comedy of Cruelty
Evan Elkins / University of Texas-Austin 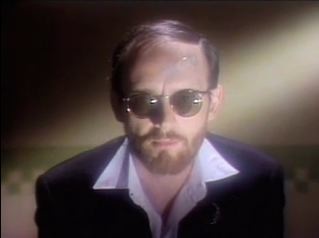 Conversations about those who have shaped and personified Saturday Night Live’s brands of comedy tend to turn to the show’s cast and/or Lorne Michaels. This is not particularly surprising, and it suggests that SNL’s apparent position as a showcase for young, Michaels-dominated comic performers resonates with audiences, the press, critics, and others who engage with the show. However, I would like to focus on Michael O’Donoghue, the former National Lampoon writer installed as SNL’s (then titled NBC’s Saturday Night) first head writer in 1975 and consider his written and onscreen contributions in the context of the show’s dual contradictory positions (at least in its early years) as cutting-edge trailblazer and mainstream tastemaker.1 Namely, O’Donoghue’s tenure as head writer and occasional cast member represents a key moment in mainstreaming certain forms of cruel, sick, or dark televisual comedy.

To the proposed question, “Why is Saturday Night Live still important?” I add a corollary question: why should we look at O’Donoghue today? For one, a further look at O’Donoghue, the show’s writers, and the authorship of SNL’s humor might question Lorne Michaels’ imposed authorial persona. More to the point of this piece, though, examining O’Donoghue’s humor might help us more clearly understand SNL’s contributions toward mainstream American comedic forms and practices as well as how the show both works within and stretches their boundaries. In this context, we might better understand not only potential lines of influence between O’Donoghue and contemporary comedy, but also the extent to which his humor calls attention to the functions of comedy more generally. Thus, SNL’s contemporary relevance does not necessarily need to be located within its current episodes; paradoxically, various points in the show’s early history might carry more currency for analyzing today’s comedic genres, formats, and practices. Sick jokes, cringe comedy, and conceptual anti-humor abound, and even if they cannot all be traced directly to O’Donoghue, one can consider his work a comedic progenitor to more recent shows such as South Park, The Sarah Silverman Program, Eastbound and Down,2 and Tim and Eric Awesome Show, Great Job!, among many others.

Hosted by Georgia senator and future NAACP chair Julian Bond, the April 9, 1977 episode of SNL offered a series of skits more politically satirical in nature than usual, including a commercial for “Right On Afro Lustre” and a Black Perspective talk show in which Bond explains to host Garrett Morris that “light-skinned blacks are smarter than dark-skinned blacks.” In this episode’s installment of “Mr. Mike’s Least-Loved Bedtime Tales,” O’Donoghue (as the titular Mr. Mike) visits the cottage of Uncle Remus, played by Morris, and tells him his version of the tale of Brer Rabbit:

In my story, [Brer Fox and Brer Bear] respect his wishes and skin him alive. I mean, it’s all very amusing to talk about being skinned alive in some children’s book, but can you imagine it actually going down? Toward the end, when they were cutting the ears away from the side of the skull, he was screaming: “Throw me in the briar patch! Throw me in the molten glass furnace; anything but this!

Mr. Mike explains that in his story, which concludes with Brer Fox and Brer Bear eating Brer Rabbit and selling his feet for lucky charms, “There’s no moral…just random acts of meaningless violence.” Even in this episode, the sketch stands out not for its overt racial humor but for its vivid description of carnage. This least-loved bedtime tale transgresses good taste on a number of levels, and it is unsurprising that it aired during a time when Michaels was attempting to limit O’Donoghue’s on-air presence.3 The sketch also gestures toward a difference in the politics of O’Donoghue’s SNL material and some other contemporaneous “dark” or “subversive” comedies such as M*A*S*H or All in the Family. While the latter two shows’ satire engaged broad political targets such as war and race relations, respectively, O’Donoghue’s antipathetic hostility—both within the story’s content and through his cold performance style—betrays a darkness of a different sort. If other forms of satire engage with certain political issues, O’Donoghue’s comedic attacks seemed to be aimed at broader principles of compassion and propriety.

But while O’Donoghue’s work is noteworthy for its confrontational nature, he is not the first name that generally comes to mind when discussing early SNL and avant-garde humor; that distinction goes to Andy Kaufman, though he only appeared periodically on the show as a special guest. Kaufman’s anti-humor performance pieces are of a different and less malevolent nature than O’Donoghue’s work, but they are similar in that they both question fundamental principles of writing and performance on which humor is supposedly built. As former SNL writer Bob Tischler notes, O’Donoghue “was most interested in shocking the audience. I don’t mind shocking the audience, but you have to make them laugh too, and entertain them. He was really just into the shock value, or doing something that was weird and boring.”4 Indeed, Kaufman and O’Donoghue both utilized SNL as a platform to investigate and undermine comic performance as well as the exchange between comedian and audience. O’Donoghue’s work reminds us that this exchange does not need to be a mutually mirthful one.

The paradoxical problems of conceptualizing cruel humor and anti-comedy are perfectly exemplified in a quotation attributed to O’Donoghue: “Making people laugh is the lowest form of comedy.” On these terms, O’Donoghue’s work exists as a sort of meta-humor that calls attention to, questions, and ultimately violates the very fabric of comedy. Peter Brunette traces the surrealist image of the ruptured or gouged eye through George Bataille and Luis Buñuel up to the Three Stooges, suggesting that it represents an assault on “all that the eye can represent—the reason, the mind, vision, the father, and meaning itself” and an according attack on the narrative of the comedic short film.5 While I do not want to veer into overly abstract territory, O’Donoghue’s impressions of celebrities jamming needles into their eyes represents a similar attack as it performs violence against the hacky comedic trope of the Vegas-style impression. This affront can be considered contextually as well, since O’Donoghue’s calculated cruelty exists within and ironically clashes with the hoary format of the network television variety show. This at once labels his work as comedy and pushes against our understanding of what comedy should entail. Indeed, some of Kaufman and O’Donoghue’s work might not even be considered comedy if it did not appear on SNL, a problematic that highlights the extent to which format informs reception.

While National Lampoon and SNL represent the most popular conduits for O’Donoghue’s comedy, it appears in a less distilled form in his never-aired television special Mr. Mike’s Mondo Video. A spoof of the exploitation/travelogue classic Mondo Cane, Mr. Mike’s Mondo Video not only gives insight to the aesthetic traditions (e.g. Mondo, exploitation, and trash)6 that informed O’Donoghue’s comedy, it highlights the trust that NBC placed in him at the time. Full of conceptual oddities such as swimming cats, a peek at Dan Aykroyd’s webbed toes, and performances by Klaus Nomi, Root Boy Slim, and Sid Vicious. NBC commissioned it as a one-off SNL replacement, though they eventually refused to air the special.7 O’Donoghue spends much of Mondo Video addressing the audience and preparing them for the scandalous nature of the footage—a maneuver that aligns O’Donoghue with the shock tactics of exploitation cinema while lessening the impact of the actual footage, thus reducing the transgressive nature of the piece as a whole. This is not to say that Mondo Video has no subversive qualities; on its own terms, it is far more experimental than O’Donoghue’s SNL material. However, it does not carry the same disruptive potential as his SNL work, because it does not exist within the context of the very form that it attempts to undermine.

While I have focused on O’Donoghue in this piece, I am not interested in suggesting that he (or any other individual) should be considered the primary auteur of Saturday Night Live’s early comedy. To do so would simply replace the legend of Lorne Michaels-as-auteur with a different myth, and it would elide the contributions of the other writers, cast, and crew. Nor am I interested in claiming that he was solely responsible for the introduction of dark or cruel humor into American comedy; to be sure, these have been around as long as comedy itself. Still, I do believe that analyses of his work in the comedic, political, and industrial contexts of SNL can help inform our discussions of “mainstream,” “dark,” “popular,” “cruel,” or “subversive” forms of comedy, whether we look to problematize these terms or see them as distinct and material qualifiers. Ultimately, O’Donoghue’s contributions to American comedy, televisual and otherwise, are nicely encapsulated in an exchange between Mr. Mike and Laraine Newman from a season-three “Mr. Mike’s Least Loved Bedtime Tales” sketch—one which was also shown during Bill Murray’s 1994 on-air eulogy for O’Donoghue:

Mr. Mike: Sometimes you have to be cruel, Laraine.
Laraine: In order to be kind, Mr. Mike?
Mr. Mike: No, in order to be even crueler.