“You Can be Dead but You’re Never Really Dead:” Six Feet, Six Inches Under 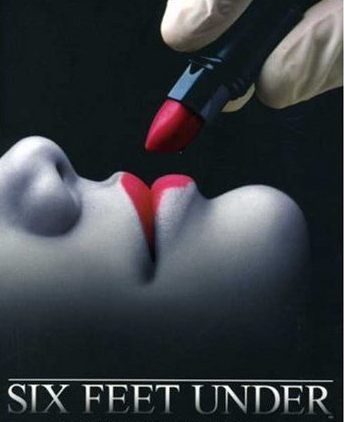 Promotional Image from the First Season of Six Feet Under

We began our first column, “Californication:  Trouble in Body Guy Paradise” (Flow Vol. 9, No. 4) by identifying a new body guy hero in the movies and relating him to the anti-intellectual American body culture that grew out of the 1980s and 90s.  Not surprisingly, many television shows have engaged these same issues, and a similar body guy hero emerged during this time period.  Some TV shows like House and Medium are totally focused on mind/body issues while offering variants on the usual body guy heroes.   The brilliant, sexy Dr. House, with his limp and cane screaming out for a Freudian reading, sums it all up:  his bodily deficiency is tied to his genius—he’d trade it all in a minute to be a normal “body guy.”   In Medium, the gifted psychic of the title does her best “work” (so to speak) while sleeping.  Alison Dubois’s psychic visions come to her in her dreams, saving her the trouble of having to go to law school for example or work hard at being a detective like her colleague in the D.A.’s office, Detective Lee Scanlon.  These shows help lay bare our culture’s struggle to grant intelligence and the work of the mind a prominent and sexy place within the larger scheme of things.  Indeed, it is perhaps revealing that it is a beautiful woman (Patricia Arquette playing real life “psychic” Alison Dubois) who gets the visions; Lee Scanlon is out there working like a man. 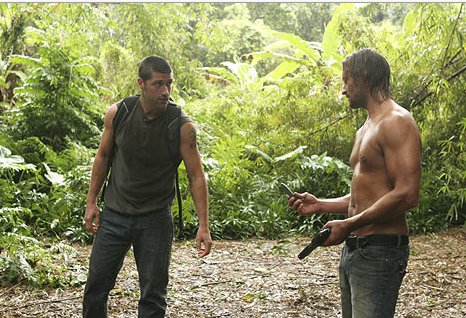 Jack and Sawyer from Lost

And indeed TV has its share of conventional body guy heroes, some of whom are pared against a mind guy ala the classic film genre paradigm. Lost pits Sawyer, a classic body guy outsider figure, against Jack Shephard, a classic doctor as body guy hero, in the fight for the love of a woman. (Doctors can gain body guy status because their profession literally involves bodies and “hands on” work—frequently surgery). Grey’s Anatomy has another classic doctor as body guy in Derek Shepherd, aka “McDreamy” who wins Meredith Grey’s love from a nerdy doctor.  He establishes his skills as a gifted lover in the pilot episode before either he or Grey know who the other is. Some shows, while being less overtly sexual, recapitulate the basic paradigm:  Prison Break contrasts the body guy criminal Lincoln Burrows with his sensitive, brilliant architect brother Michael Scofield. Battlestar Galactica has a conventional body guy hero in Lee Adama and a mind guy in Baltar, a very unusual figure in regards to sexuality issues.  Due in part to the narrative complexity of many episodes over several seasons, some of these TV shows create quite complex variations on the rather fixed, stable relationships in terms of sexuality and attractiveness of the mind guy-body guy dichotomy found in cinema.

Within this context we now examine the first two episodes of Six Feet Under (2001), suggesting how it lays out the dynamics of the series within some of the above parameters, much like we argued the opening two episodes of Californication did for that series.  The title Six Feet Under suggests a show about the body — the dead body.  And indeed it delivers on that promise but it also integrates the funeral home setting into its observations about life in 21st century American body culture of the living kind. And this is not unqualified good news for the body guy and his legendary penis.  Nate Fisher (Peter Krause) is a classic body guy in every regard.  He has rugged good looks and is a non-conformist living on the outskirts of society.  He dresses in jeans and has the scruffy looks of a working class man.   Rather than take his place in the family business, he “irresponsibly” leaves home and joins a counterculture.  His brother David (Michael C. Hall) becomes a mortician and works in the family business; he dresses in suits and has a prim and proper appearance (figure 1). 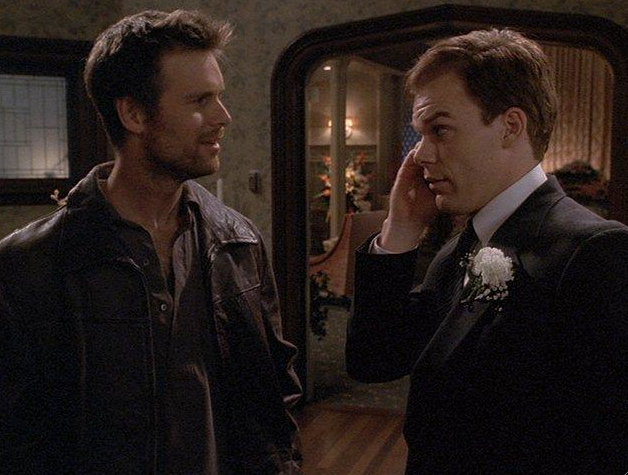 The pilot begins with Nate’s return to Los Angeles for a family visit. We are introduced to Nate as he deplanes and says goodbye to Brenda (Rachel Griffiths), a traveler with whom he has struck up a conversation.  She is of course immediately sexually attracted to him as women are to body guys—she can tell that he would be a great fuck.  Minutes later we see them engaged in highly athletic, pounding intercourse on a counter in a janitor’s closet in the airport (figure 2).  This kind of pound, pound, pound sex that we call pound cubed in our forthcoming book, Body Guys in the Movies: Unmaking Love and Remaking Your Life is classic body guy sex.  The body guy sex style is penile and penetration-centered and body guys always perform above par, even when they are doing it with a new partner for the first time and in extraordinary circumstances. The context for this stellar sexual performance is as follows:  Nate and Brenda, who hardly know each other, have first time sex in a public place that is cramped and physically uncomfortable while in danger of being discovered by airport personnel and under the pressure of knowing that family members are late in coming to pick Nate up.  In this almost absurd setting, Brenda commands, “Shut up and fuck me,” then moans in pleasure as Nate does so and adds approvingly how “very good” he perfectly performs in the most imperfect of situations.  The very definition of the body guy and his magical penis!  Needless to say, Brenda is suitably impressed with Nate and pursues a relationship with him. 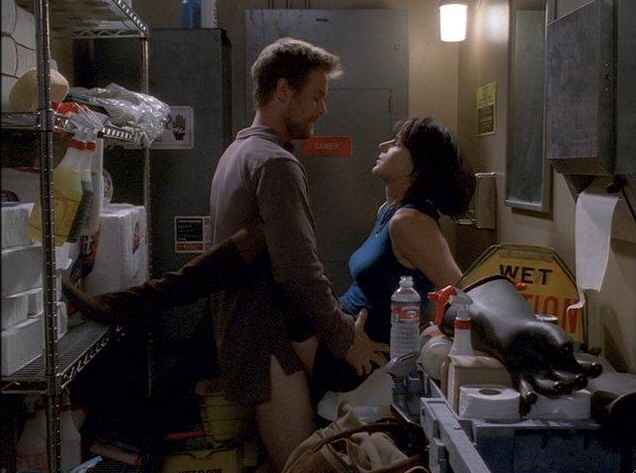 Figure 2: Nate and Brenda having sex at the airport.

In the second episode Nate is sent to a pick up a body in a nursing home.  He lifts the head and another mortician takes the feet as they move the corpse from a bed to a gurney.  In the process, the man’s bed clothing opens, revealing an erection.  Nate is shocked and comments on it.  His helper, with a bemused look in his face, replies, “You can be dead but you’re never really dead.”   With the corpse in his hearse, Nate calls Brenda and meets her for coffee.  After hearing him relate the incident about the erection, she remarks in an erotically playful manner, “I don’t meet that many men with dead guys with hard-ons in their cars.”

Both the mortician and Brenda make light of the incident in a sexual manner, the former suggesting it gives mysterious life to a dead man and Brenda suggesting it is kinky and turns her on.  But the series suggests something else.  Wishful thinking to the contrary, when a man is dead, he is dead, and his penis is dead and useless — even if he was a body guy with that oh so impressive penis.  It did nothing to save him; it was powerless and this last gasp of spectacle and display does not point to the power of the penis/phallus to defy death and somehow live on but, rather, proves hollow and empty in its path.  The bigger they are, the harder they fall.  At the end of the series, Nate, the body guy, will be dead – really dead – in the prime of life due to a genetic deformity in his brain causing a stroke.  No one will think it is funny or sexy.  If episode one establishes the body guy in all his glory, episode two poses the shadow of death that awaits Nate over the course of the series, and this tension is played out over all five seasons.  There is something desperate in clinging on to a dead man’s erection as proof of anything, but as Peter Lehman has shown elsewhere, movies have in recent years become fascinated with images of the penis in death. Six Feet Under makes clear that at one and the same time this fascination is contradictory—on the one hand, it celebrates the seemingly impressive spectacle of the penis even in death, while on the other hand it reveals that no matter how “impressive” that display may be, it is utterly useless and powerless. The message to men is, “You, and your penis, really are dead.”