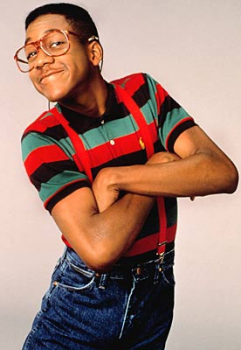 From Revenge of the Nerds and Napoleon Dynamite, to Doogie Houser and Steve Urkel, the “nerd” or “geek” in American film and television has been a popular mainstay. Historically, the nerd has been constructed as an awkward, math-savvy, social and sexual failure. In most instances, nerds are assumed and shown to be white and male, with several exceptions, such as as Steve Urkel (played by Jaleel White) in Family Matters, and firmly heterosexual, though his shortcomings are often ridiculed as a sign of sexual weakness and homosexuality1. The nerd is culturally placed in contrast with a more athletic, socially skilled, sexually aware individual—the cool kid or jock, who demonstrates a hegemonic heterosexual masculinity. Such a dichotomy can be called the hip/square dialectic. This dialectic serves to construct both halves—the hipster and the square or nerd; without its counterpart, each looses its meaning. Thomas Frank2 argues that the 1960’s culture war’s hip/square relationship resulted in the co-opting of hip or cool in order to diffuse its potential transgressive political power, and transform hip into a consumer commodity.

We can witness the hip/square dialectic across television and film history in two ways: 1) the odd-couple narrative of the square and his/her friendship with a hipster (such as Dobie Gillis and Maynard G. Krebs in The Many Loves of Dobie Gillis); and 2) the antagonistic narrative of a square and his/her hip/cool competitor, the jock or popular kid (à la Revenge of the Nerds). However, in recent years, attempts have been made to cast geeks in a new light: “geek chic” and “technosexual” are labels that have been used to celebrate nerd identity. Marketers have capitalized on this discourse in order to sell techno-this and cyber-that. In essence, the popular discourse suggests that nerd is the new “cool”—that there has been a subversion of the hip/square dialectic. 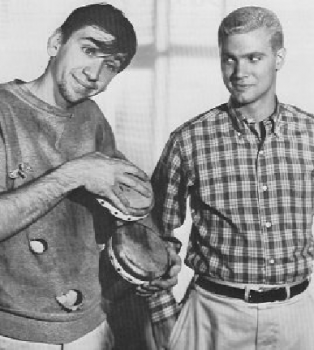 Take the character of Seth Cohen (played by Adam Brody) on the hit youth television series The O.C. Cohen played the square to Ryan Atwood’s (played by Benjamin McKenzie) hipster in affluent Orange County, Calfornia. The show portrayed Seth as a geeky teen, but one who gains popularity as well as an attractive, popular girlfriend. In a Joel Stein interview with Brody, the two attempt to reframe the character’s nerd persona:

“Comic books aren’t nerdy. You’d have to be an idiot to think computers are nerdy. The nerd now is the Bush Administration-supporting, anti-intellectual dumb ass,” comments Adam Brody.

Whether that’s true or not, it’s clear the once desirable macho-jock type hasn’t got such pull. There’s a reason the Rock and Vin Diesel haven’t filled the gap left by Schwarzenegger and Stallone: nobody minds the gap. And in a world without heroes, as the movie trailer voice-over guy might say, the slightly awkward can be slightly cool.3

This transposition of nerd as hip, jocks and “anti-intellectual dumb asses” as square, attempts to refigure the concept of “nerd” by repositioning the old nerd as the new hegemony of cool, and by extension, cool masculinity. A similar inversion plays out in Apple’s Mac commercials that place the hipster “Mac guy,” a jeans-and-sneakers-wearing younger guy with a nonchalance that exudes “cool,” at odds with the square “PC Guy,” an older, anxious, pudgy guy in a suit. In this campaign, Mac as hipster/PC as square works to identify Mac with young, tech-savvy culture. Thus, we learn how computer-tech marketers are rebranding cool onto a traditionally nerdy persona. The technology associated with nerds is now seen as hip, as the semiotic codes of nerd have been switched. 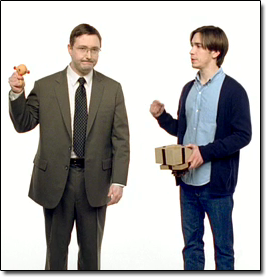 Mac and PC Address their Audience

If we believe Brody and Stein and Mac, then we should see a general cultural embracing of the nerd. However, if we examine a particular reality TV moment, the So You Think You Can Dance (SYTYCD) second-season finale dance by Travis Wall and Benji Schwimmer (2006), we can interrogate another, less celebratory, representation of the nerd and its role in normativizing white patriarchal masculinity in commercial reality TV.

SYTYCD is a reality show where contestants compete to win a dance competition that will award them with a professional job in a top dance company. Throughout each season, the cast of “girls” and “guys” pairs up every week to perform in different dance styles. The lowest scoring dancers are ejected during the week’s second show. Of course, the couples are always male/female partners. However, in the second-season finale, we are treated to a reality TV “twist”—all four dancers must pair up with male and female partners. The two male finalists, Benji Schwimmer and Travis Wall, come to be known collectively as “Tranji.” 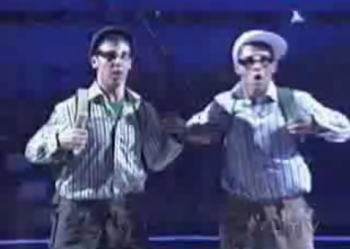 The two dancers, both white, enter the stage when a school bell rings. Dressed as prototypical “nerds”—shorts, tube socks, strange hats, broken glasses, and very full backpacks–they bumble around stiffly. When the music comes on, however, they look surprised as they “catch” the beat by thrusting their pelvises, as the song “Gyrate” (by Da Muzicianz, featuring Mr. ColliPark) instructs them. They rip off their button-down shirts, lose the glasses, and transform into expert hip hop dancers. At the end of the song, the school bell rings again, and they pick up their backpacks and return to bumbling nerd status.

This “transformation” of the nerd4 reveals the racialized nature of sexuality deployed by the social construct of the nerd. The role of hip hop in this performance is that of a sexualizing force, as the title of the song “Gyrate” suggests. Moreover, the white nerds channel an imagined Black sexuality through the hip hop music and dance, instantly transforming themselves into spectacular attractions, displaying fluid, libidinal movement and cutting-edge dance moves. The awkward physicality of the nerd is lost to the mesmerizing street moves of the newly transformed hip hop wonders. Such a “transformation” reifies the hypersexualization of Black masculinity and “compulsory African American cool”.5 At the same time, we witness the desexualization of the seemingly impotent white nerd. In so doing, this dance also reifies what Vershawn Ashanti Young terms the broader double-bind of Black masculinity: dominant “nigga-gender” and its co-constructed and disavowed opposite, “faggot-gender.”6 Coined by rapper Ice Cube, who says, “real niggas ain’t faggots,” 7 this conundrum is situated around the hegemony of dominant physical heterosexual masculinity, with faggot-gender its intellectual, quieter, non-hegemonic masculinity that when constructed in a homophobic framework, cannot function as a legitimate masculinity.

Simultaneously, the Tranji dance reifies the erasure of Black academic success, as the racial dynamics at play force the denial of the imagined Black nerd. Through both the whiteness of the nerd and the myth of compulsory Black cool, a Black nerd is unable to remain “Black” while taking on nerd qualities. In embracing the “white” nerd culture, he loses cultural capital in Black circles for “acting white.”8 The white nerds return at the end of the skit like Cinderella after the ball, to resume their ostensibly sexless, cerebral lives.

In this performance, humor de-politicizes the racial, sexual dimensions of the dance. In training and out-takes, both dancers play up their goofiness, seemingly in order to deflect the homophobic fear of performing as a same-sex dance couple. Schwimmer twice tells the camera that he’s going to show off his “sweet moves”—a phrase that was popularized by the title nerdy character in megahit film Napoleon Dynamite (2004), which includes its own cult nerd dance sequence. When choreographer Shane Sparks tells the dancers to move closer so their “butts touch,” they roll their eyes and actually move away from each other; when this clip is played for the audience, everyone laughs. Throughout, the audience and judges scream with glee while engrossing themselves in Tranji’s visual and kinesthetic transformation. Is the laughter based on the sheer physical awkwardness of the nerd (glasses, tube socks, heavy backpack, goofy facial expression)—a laughter that comes at the expense of the social outcast, a social outcast that simply does not fit the dominant culture’s ideal of masculinity? Or, is the laughter based on the fact that this is a fantasy—that it is impossible for a “real” white nerd to transform himself into a Black sexual being? Or, more insidiously, is the laughter and glee based on the titillating thrill of the imagined white transformation to Blackness? The desire to appropriate Black culture at will, in order to experience the media-represented notions of Black male sexuality, which is imbued with stereotypes long visible in American culture; a construct of sexuality that devalues and objectifies? In each formulation, we are left with a true appropriation, not a sharing of cultures born out of unity in struggle in Black culture and politics9, and the uneasy racialized hip/square dynamic.

Thus, this performance casts serious doubt on the transformation of the nerd into a hipster, and of the transcendence of the hip/square dialectic, and holds obvious implications for solidifying dangerous discourses of racialized and homophobic masculinities. The hip/square dialectic seems to be toyed with here, as in the other sites mentioned, with the potential to bring counter-hegemonic nerd identity into the fold, whilst never critiquing the dialectic or the oppressive discourses and material realities within which they work.