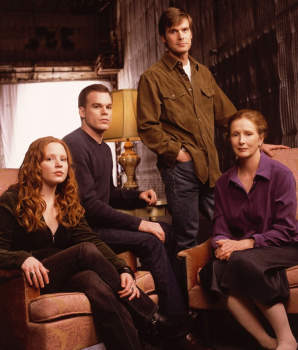 The Fisher family of HBO’s Six Feet Under

We watched Six Feet Under for an episode or two when it began in 2001. I was put off by its inconsistent tone and wasn’t sure I was up for a show in which someone dies every week. Years later, long after it had established a wide and passionate following and run its final episode, we began to watch Six Feet Under again and this time we pretty much couldn’t stop.

The show follows the Fisher family, their employees and friends and lovers, across five cable-size seasons: sixty episodes, fifty hours of drama. The characters grow and change, they have relationships and marry and have children, new characters are introduced while old ones are forgotten. As befits a shows set in a funeral home, some of the most (and least) beloved characters die. It took the original audience more than five years to see all of this play out. They had to wait a week for each new episode and endure months of hiatus between seasons. By contrast, we watched in two sustained bursts of viewing first in the summer of 2008, while much of the schedule was filled with junk, and then in the early winter of 2008 and 2009 after the November sweeps period again ushered in a period of reruns and specials. We binged.

As much as any narrative medium, television affords intense engagement with characters. We get to know the people on the screen so intimately that they become our TV friends. Sometimes we know them better than our real-life friends, because we get so much insight into their psychology, their secrets, their hopes and fears and dreams. Spending years with characters, they become regular visitors to our living rooms, like pals we see week after week at the same hangout. Binging intensifies the pleasure of this engagement by making characters all the more present in our lives. The relationship becomes more like a passionate but doomed affair, a whirlwind that enlivens us so well for a time, only to leave us empty and lost when it sadly, inevitably, ends.

Binging isn’t new. As a kid I watched my favorite shows several times a day for years. But the fact that I could binge on a show like Six Feet Under is certainly a product of its historical context. We watched the show on DVD, programming our revival at our pleasure. This kind of viewing experience emphasizes the serial nature of a soapy show such as SFU, reproducing the daily rhythms of daytime drama with content originally intended to be seen weekly.

Binging also makes one more conscious of the season as a narrative unit. Shorter seasons and long hiatuses between them encourage viewers of original cable shows to see the season as a meaningful narrative category. So of course do DVD sets. When we watched The Wire we would near the end of a season and go online for our “re-up” (Baltimore slang for a fresh shipment of heroin) of a new season to have ready when we would be. A season of twelve or thirteen episodes can more naturally be constructed as a coherent story, and viewing those twelve or thirteen hours over the course of a week or two (or less) shows off this unity. 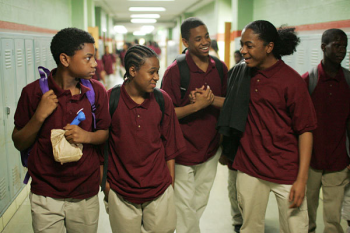 Students from HBO’s fourth season of The Wire

The shows I binged on as a kid were programs like Three’s Company that aired in the hours between school and dinner. They are episodic rather than serial. Often the episodes were rerun in a different order from their original airing, though I do recall the sitcoms of my childhood progressing year by year, so that you would see a few months of Chrissie episodes of Three’s Company followed by a brief stint of Cindy episodes, and then a few months of Terri episodes only to return to the early Chrissie seasons. Other than these cast changes, the binging Three’s Company viewer would have scant awareness of the sequencing of episodes. I certainly never had any idea when a season of the show was beginning or ending. Each episode tells its own story and the viewer doesn’t need to have seen the earlier ones to get the later ones. But watching all of a serial drama like SFU on a binge is like tearing through a thick novel in a week at the beach. It’s all one story, and even though episodes and seasons resolve at their conclusions in some respects, as a viewer you always find yourself in the middle.

Other things we have watched this way were similarly soapy in their narrative form. We often binge on the first season or two of a show to catch up when critics and friends tell us we’re missing something good. “Quality TV” these days demands a completist mandate: start at the beginning. This first happened for us with The Sopranos. Battlestar Galactica was another. I find now that I liked BSG much more during our early-seasons binge, when I could better keep its complicated story straight. Long breaks between seasons make it harder for me to remember the situation, the stakes, the state of characters’ relationships with one another. The experience of the first two seasons was so vivid from binging that the subsequent ones have made less of an impression, and my enthusiasm for BSG has diminished. 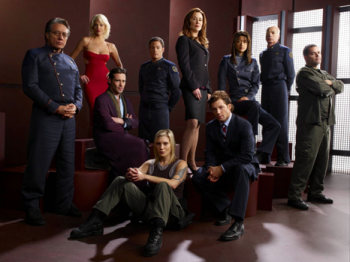 The cast of Sci-Fi’s Battlestar Galactica

No matter the format of a show, watching on a binge intensifies the continuity of character arcs. Shows that are hybrids of episodic and serial narrative forms like Degrassi: The Next Generation and Judging Amy seem more serialized when viewed in heavy regular doses. The Wire, which has fairly self-contained season-long arcs with strong thematic and narrative unity and coherence, starts to seem more like five volumes of one big book (e.g., Proust’s In Search of Lost Time) than like a series of novels with continuing characters (e.g., the crime novels of the show’s writers Dennis Lehane and George Pelecanos).

This new kind of binging further removes us from the conditions that obtained for television viewing for many decades. The DVD frees us from the program schedule and the flow of content, which in many cases includes commercials, promos, and idents, as does watching with the aid of a DVR or iTunes or BitTorrent. The new technologies that give viewers the agency to program their own media mark a shift from ephemeral to collectible content. TV shows and movies are now more like books: you can own or borrow copies of them, use them whenever you like, and keep them on a shelf as an advertisement of your taste.

Something is lost in this process, and we should be wary of accepting this new way of viewing as an evolutionary step. In some ways, binging feels unnatural. Watching this way, we lose our connection to the larger viewing audience as community and to the temporality of broadcasting that unites a program with the moment of its airing. (Viewers still get this experience from sports and reality TV and news and talk shows — from genres of programming inimical to binging.) We also lose a significant aesthetic effect of the weekly rhythm of the prime-time serial. It’s hard to be specific about what this means, but it’s a function of how we appreciate a show that airs once a week, and takes a break of a few months between seasons — what we pay attention to, how it makes an impression on us, and how the interval of time between episodes and seasons encourages us to talk and think about the characters and their situations in the space between installments of their story. Binging makes the experience of television more intense and personal. It can feel like too much of a good thing, and maybe it is.

1. The Fisher family of HBO’s Six Feet Under
2. Students from HBO’s fourth season of The Wire
3. The cast of Sci-Fi’s Battlestar Galactica