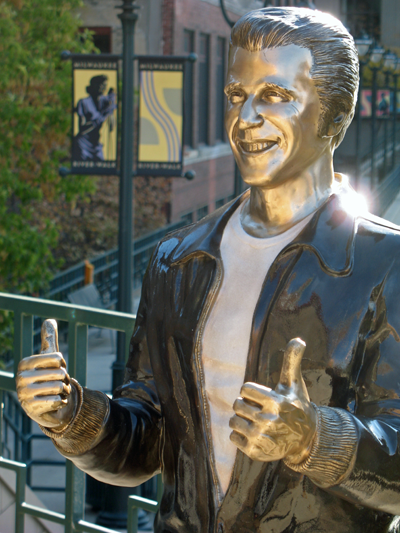 In August the latest in a series of recent public artworks in the U.S. honoring TV and movie characters was installed in downtown Milwaukee, Wisconsin: a life-size bronze statue of Arthur Fonzarelli– Fonzie, The Fonz–with his signature two thumbs up. Other statues, most sponsored by TV Land, have included Rocky Balboa at the Philadelphia Museum of Art, Ralph Kramden at the Port Authority Bust Terminal in New York City, and Mary Richards tossing her tam skyward in Minneapolis.

The Fonz of course was a main character in the ABC sitcom Happy Days whose black motorcycle jacket was long ago enshrined at the Smithsonian alongside Archie and Edith Bunker’s chairs. Although shot in Los Angeles in the 1970s, Happy Days was set in Milwaukee in the 1950s, as was its spinoff Laverne & Shirley. Henry Winkler, who played Fonzie, and much of the rest of the Happy Days cast “returned” to Milwaukee for an unveiling. A crowd showed up. Speeches were made. Photos were snapped. Now the statue is a point on the city’s tourist itinerary, along with brewery tours and museums and the pretty lakeshore.

The announcement in 2007 of plans for the Bronze Fonz was the occasion for more than just curiosity and excitement. Within the city’s arts community, the Bronze Fonz was an object of controversy and scorn. Rather than a project spurred by local arts institutions, the Bronze Fonz was the product of funds raised by Visit Milwaukee, a non-profit agency whose mandate is to promote tourism to boost the local economy. The Bronze Fonz was launched without the sanction of anyone in the local art world, and the local art world bristled at this trespass onto its turf. A prominent gallery owner threatened to close up shop and leave town if the plans went ahead (his gallery did close earlier this year). The director of the Milwaukee Art Museum wrote in opposition to the Bronze Fonz. The Milwaukee Journal-Sentinel art critic followed the controversy in a series of blog posts gently slanted against the project. A debate was joined between defenders of a concept of public art as serious and important to a city’s legitimate cultural identity on one side, and defenders of the virtues of increased tourism and fun on the other. The aesthetic mission of art opposed the crowd-pleasing, commercial taint of entertainment, and entertainment won the day.

This episode was yet another occasion for reasserting the cultural hierarchies which place television and pop culture as illegitimate, and which function to reproduce social distinctions. Even the statue’s promoters bought this line. The CEO of Visit Milwaukee, Dave Fantle, told a Journal-Sentinel reporter that the Bronze Fonz is “not art but a piece of pop culture.” In part this clarification was self-justifying; Visit Milwaukee managed an end around the usual processes involved in installing a public artwork in a prominent city location. But no matter the motivation, the discourse positioning a Fonzie statue as at best frivolous fun misses the appeal and significance of popular culture in ordinary people’s lives. To look at the photos people take of themselves posing with the statue is to recognize the depth of our identification with the narratives of popular culture. It might be fun, but it isn’t frivolous. 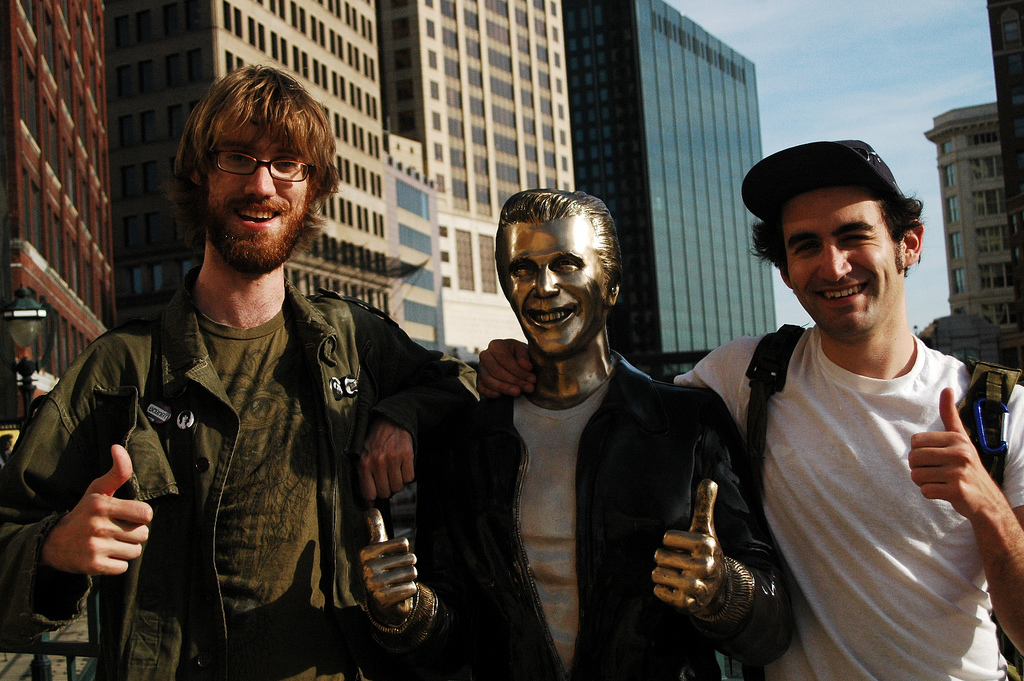 Sam and Mike with the Bronze Fonz

But at stake in this debate was more than just the promotion of values endorsed by the snooty guardians of culture or the populist civic boosters. The identity of the city was also a term in the controversy, and this identity is tied up in the representation of place in popular culture like Happy Days and Laverne & Shirley.

Like many Midwestern cities, Milwaukee’s past as a site of productive industry is more glorious than its post-industrial present. Today unemployment is high, especially among the city’s large and segregated racial underclass, and economic growth is slow. The city does not like to present this face to the region, the country and the world. It hopes to attract “creative class” young people and spendthrift convention tourism. It wants to seem like a hip, vibrant town with plenty of attractions to excite out-of-towners.

Happy Days (and Laverne & Shirley) might be a fond memory, but is not much to hang onto as a point of pride for Milwaukee. The setting was in some ways incidental to the show. Its producer Garry Marshall wanted to set Happy Days in his hometown of the Bronx, but the folks at Paramount thought this would come off as too ethnic (Brant, 20). They were looking to duplicate the family format of 1950s shows like Father Knows Best and clearly preferred to represent an idealized middle America. Wisconsinites are proud of their culture, for instance their foodways (the German-influenced beer and sausages; dairy foods like cheese and frozen custard; and Friday fish fry events where the Brandy Old Fashioneds are more often savored than the fish). But the ethnic or regional identity of Wisconsin or Milwaukee is hardly in evidence in Happy Days. For instance, more of the show’s characters have Italian names (Fonzarelli, Delvecchio) than the more locally common German ones. One hears more New York accents like Winkler’s than Wisconsin accents. You wouldn’t know from watching Happy Days that the typical white Milwaukeean speaks more like Sarah Palin than Mrs. C.

The setting of the show in Milwaukee was in a sense the denial of place rather than an investment in it. Marshall, and Italian-American and New Yorker, seems to have wanted to do urban-ethnic, but in some ways the specificity of his characters’ identities got scrubbed from the representation. Setting the show in Milwaukee was a way of striking a note of Americana — an idealization of “normal” America just as much as it was an idealization of the 1950s as a more innocent and familiar and comforting time in history. Jefferson High, where the characters go to school, and Arnold’s drive-in restaurant, where they slurp milkshakes and dance to jukebox records, are meant to be the kind of school and hangout that you might find anywhere in the USA. 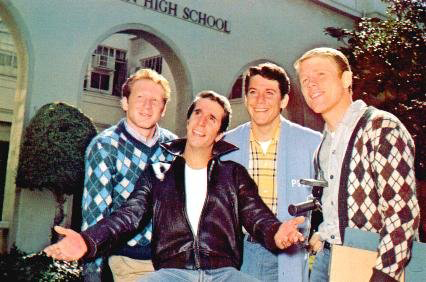 Fonz with the cast of Happy Days

Milwaukee can be tickled to have a Fonzie statue because Fonzie is essentially cool. But it’s hard to be proud to have been chosen as an undistinct enough place to stand in for Anytown, USA. America of the big cities and coasts is often blind to the specificity of the places in the middle of the country, and Happy Days is symptomatic of this. (Things change in Laverne & Shirley, which is more blue-collar and which has the brewery setting to add local color.)

But we are also proud to have been the setting of a popular show at all, an opportunity for “Milwaukee” to have been uttered on a regular basis to an audience of millions. To this day, legend persists that a frozen custard stand called Leon’s was the inspiration for Arnold’s. Leon’s has gorgeous vintage signage and looks like it hasn’t changed since the 1950s. 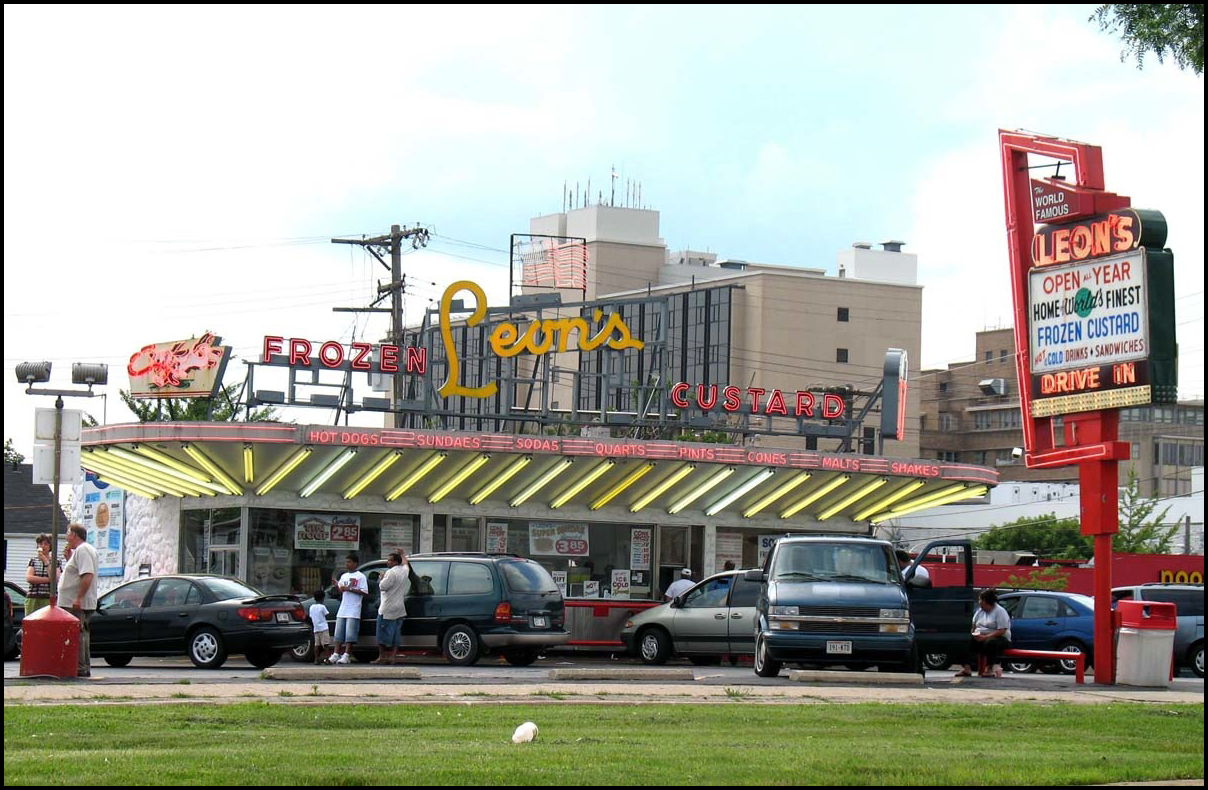 If you ask the custard server if it’s true about Leon’s being the original Arnold’s she might say yes (I’ve heard it myself). But the truth is otherwise. Tom Miller, a producer at Paramount, suggested setting Happy Days in the suburban Milwaukee neighborhood where he grew up after Garry Marshall’s Bronx setting was nixed (Brant, 20). Jefferson High was based on Nicolet High in Glendale, WI. Arnold’s was based on a drive-in called The Milky Way on Port Washington Rd. that no longer exists. But it pleases people around town to think that the place that inspired Arnold’s still serves food, and that you can still go back there if you want to visit the 1950s as represented on television. Like everywhere else, nostalgia for a past that never existed lives in Milwaukee.