Jacques-Alain Miller, arch-Lacanian and part-time moralist, recently published a piece entitled ‘Sarah Palin: Operation “Castration”‘. In it, he argues that Palin represents a certain kind of ‘post-feminist’ woman, one who knows that ‘the phallus is a semblance’ (more on this anon). Jessica Valenti, in the Guardian1 states that Palin is an ‘anti-feminist’ through and through, because, among other things, she would limit women’s right to choose and abolish sex education. Palin herself is a member of the advocacy organisation ‘Feminists for Life’, who take the apparently feminist commitment to ‘non-aggression’ to mean that any violence directed towards a foetus (even if the pregnancy is the result of rape) is incompatible with the supposedly natural non-belligerence of the female sex.

Here we have three different takes on the same word, in which a) for Miller, a pre-Palin feminist would be a woman (Ségolène Royal, for example) who ‘imitated man, respected the phallus, and performed as if they had one’ and thus would be easy to dismiss as lesser or sub-standard men b) for Valenti, a feminist is someone who supports a woman’s right to choose, who fights for equality in every walk of life and c) for Palin herself, who is both fiercely maternal and politically aggressive, a feminist would indeed be a ‘pitbull in lipstick’. A shallow conception of feminism, and a common response whenever individual women achieve power of any substantive kind, would be to say ‘look, there’s a woman Prime Minister! A woman CEO!’ Haven’t you gotten what you wanted?’ As Valenti puts it, this position merely believes ‘that all women want is … another woman.’ Beyond whatever she actually says or does, Palin is painted as a success story for women, simply because she is one. 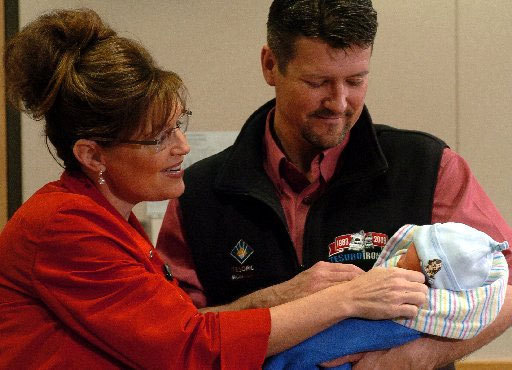 The Republican abuse of the term feminism in the past decade or so is an astonishing lesson in the political opportunism of language. Where the Right would once have bundled ‘queers’, leftists, feminists, peaceniks and other sundry enemies together as internal enemies of the state, when it came to providing reasons for the invasion of Afghanistan, in particular, the language of feminism (and to a lesser extent all liberal rights) was suddenly plucked from the dustbin of history as a specifically ‘Western’ value: ‘Respect for women… can triumph in the Middle East and beyond!’ cried Bush in a speech to the UN, perhaps forgetting that on his first day in office he had cut off funding to any international family-planning organisations which offer abortion services or counselling2 .

It is clear, then, that we are not only dealing with ‘right’ and ‘left’ feminism, but with a fundamental crisis in the meaning of the word. If ‘feminism’ can mean anything from behaving like a man (Miller), being pro-choice (Valenti), being pro-life (Palin), and being pro-war (the Republican administration), then we may simply need to abandon the term, or at the very least, restrict its usage to those situations in which we make damn sure we explain what we mean by it. Valenti opts for a plaintive (if appealing) humanism, with the idea that it’s ultimately ‘good’ or ‘bad’ people who will win, and that this divide is indifferent to gender: ‘the last thing America needs is another corrupt and lying politician – man or woman’.

But the reception of Sarah Palin has not been played out on the grounds of her purported ‘feminism’ alone. In fact, she has managed to avoid many of the old female dichotomies – mother/politician, attractive/successful, passive/go-getting – by combining them all at once. In this sense, she is the literal embodiment of the 1980s imperative that women could (and should) ‘have it all’ – the babies, the job, the success, the sex: a gun-toting pro-lifer who beats the men on their own turf. She even beats many older Right-wing women at their own game, those who stand in front of crowds at political rallies, arguing that women should be at home with their families, staging the spectacle of their own performative contradiction. 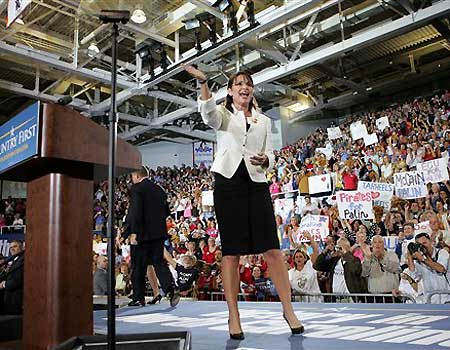 As Miller quaintly puts it: ‘a Sarah Palin puts forward no lack’. Everything she has in her armoury (literally, rhetorically, visually) is in the open. All her potential weaknesses only serve to make her more (super)human, more aggressively populist, more everywoman: the dynamics of her family life, her lack of experience, her hobbies and poses (her love of guns, her ‘hockey mom’-ness). Women want to be her3 , many men (and perhaps even a few women) want to have sex with her (see the Facebook groups: ‘I would totally do Sarah Palin’, ‘Sarah Palin is HOT!’ and ‘I’d Bang Sarah Palin’). The more interesting of these pro-Palin groups make explicit the link between her attractiveness and the current political spectacle: ‘Sarah Palin is stirring things up–and I’m EXCITED’ (or, as Miller puts it, in a slightly more literary register: ‘she brings a new Eros to politics’). The Facebook group ‘Sarah Palin is twice the man Barack will ever be’ goes halfway to recognising her power, but remains trapped within the old idea that to be a woman in politics one must be more like a man.

Miller’s argument is not merely that Palin makes a ‘better man’ than Obama, for example, but that she alone realises that ‘the phallus is only a semblance’ – that is, pretending to have power when one does not is not nearly as effective as understanding the contingent nature of the field of power (or meaning) and exploiting it at every turn. Palin is not pretending to be a man – she is pretending to be all women at once, and yet perfectly mundane. The Facebook group ‘I Am Terrified of Sarah Palin’ perhaps captures some of Miller’s fear: ‘For the moment, a woman who plays the “castration” card is invincible.’ For Miller, Palin’s ability to castrate – to invoke the fear of emasculation by undermining the very symbolic register in which castration anxiety can be warded off – is literally petrifying: ‘they [her political opponents, her media enemies] have no idea how to attack a woman who uses her femininity to ridicule them’. 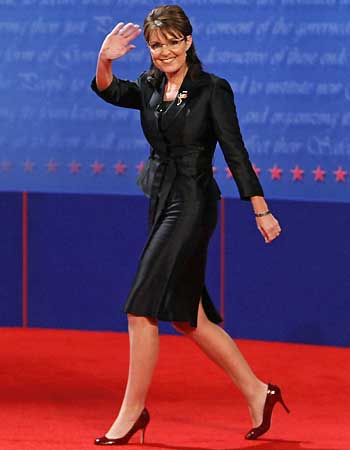 Palin at the Vice President Debates

The anxiety that ‘a Sarah Palin’ induces is not the old one of noting with horror the lack (‘why don’t girls have what I have?’), but of the greater fear of a vast female plenitude: America has found its new hero, and she’s a woman who turns the insults that every successful woman has hurled at her (dog, bitch, flirt) into ammunition to shoot dead her accusers. She turns maternity into a war-weapon, inexperience into a populist virtue and Feminism into something that even the Christian Right could approve of. She is absolutely, limitlessly terrifying.

Author Bio:
Nina Power is a Lecturer in Philosophy at Roehampton University. She is the author of a forthcoming book on feminism entitled One-Dimensional Woman (Zero Books, 2009). She has written widely on contemporary European Philosophy and politics.