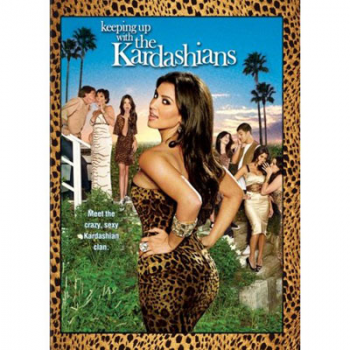 On October 4, 2007, E! debuted Keeping Up with the Kardashians, a realty television show featuring the blended Kardashian- Jenner family, and is currently gearing up for its third season, which is set to air in the beginning quarter of 2009. From the onset, the primary premise of Keeping Up has been to feature the stories surrounding the rising fame of the second oldest Kardashian sister, Kim. With her mother, Kris as the mom-manager, her sisters, Kourtney, Khloe, Kendall, and Kylie, and step-father, Olympic gold medalist Bruce Jenner, in supporting roles, Kim Kardashian’s bouts with the tabloids and other celebutante- inflicted problems take center stage in the narrative construction of the show, despite her airtime being equal to or less than the others. Undoubtedly, E! sees the exploitation of the Kardashian family as another site of bankable reality television programming to add to its lineup of celebrity-based family shows, which includes Snoop Dogg’s Fatherhood and Living Lohan (starring Lindsay Lohan’s family). Of particular bankability is the star persona of Kim Kardashain and all that which it includes; needless to say, I am talking about her ass.

For a few years prior to the debut of Keeping Up, Kim Kardashian began gaining recognition from the tabloids and celebrity bloggers through her association with other Hollywood socialites turned reality television stars such as Paris Hilton and Nicole Ritchie. Following what seems to be the formula for quick fame in Hollywood, Kim Kardashian’s early 2007 sex-tape scandal projected her from being another rich, L.A. girl seen with the Hilton sisters to being a rich, L.A. girl with a video of her having sex with her then boyfriend, rapper and R &B artist Ray J., being broadcasted to any interested spectator across the internet.1 While a threat of a lawsuit against Vidvid Entertainment, the adult film production company that tried to publicly release the tape, brought upon by the Kardashians ensued, the popularity of Kim and her derriere soared. Seeing her as a site (or sight) to commodify, only months later E! publicly announced that they would start airing a show featuring Kim and the rest of the Kardashian clan in the fall of 2007. Rightly following its missions to be the entertainment news source, E! and E! Online, its internet counterpart, have been one of the primary sites of promotion of the Kim Kardashian star persona and its body-focused publicity. Thus, this article will examine a number of the ways E! has promoted Kim and her assets throughout her stint as Hollywood, reality television royalty. 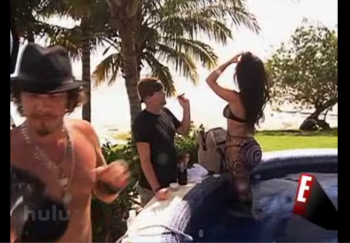 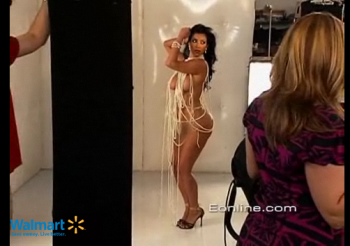 Riding the wave of body-focused publicity induced by the sex-tape scandal, the show text itself presents multiple secondary plotlines that contribute to the ongoing fame-seeking narrative of Kim Kardashian aspiring to become a Hollywood sex symbol. Whatever the exact job requirements and prerequisites needed for this status are, of course, debatable. Never is this more apparent than in Episode 2 of Season 1 when prospective managers ask Kim(the “crisis” of this episode is Kim becoming fed up with her Mom as her manager) what it is that she wants to do and her answer is a resounding, “I don’t know”. Through the number of events and gigs Kim (and sometimes her sisters) are shown doing on the series, being a poster child for all clothes scantily-clad seems to be the type of job done by one aspiring to become a model and, thus, their occupational goal. Therefore, it could be said that Kim Kardashian’s occupation is that of a model with a reality television show. Yet, I am hesitant to state this as her profession for it becomes apparent in the show that she is not necessarily considered a model by the industry. Kim’s hesitancy with deciding what to aspire to combined with the discontentment of a number of the designers she works for — they explicitly state her non-professional model status (e.g., the Ashely Paige swimsuit photo shoot when Ashley Paige makes the statement regarding her perceived laziness of Kim and her sisters and their inability to do what she wants: “That’s the difference between a working model who makes their living off working and whatever they are.”) — make it clear that it is her sex-tape, rump-associated persona that gets her the jobs. Nonetheless, Keeping Up follows Kim on a number of her excursions in creating this new form of stardom. Whether the camera follows Kim who is accompanied by her mother and manager, Kris, on her photo shoot for Playboy or dropping in on her and her sisters’ karate lesson, where they constantly comment on her backside and its ability to the do the defense move called “the butt strike”, Kim’s backend blatantly plays a major role in the narrative of show.

Promotional items and appearances produced by E! for Kim and Keeping Up also promote this rump-centric discourse. With her family in the background to each of her sides, the cover of the Season 1 DVD features Kim wearing a skin-tight, animal print outfit in the foreground striking her signature look-behind-the-shoulder pose – thus, ensuring that her backside takes center stage. Further promoting this idea is the supplementary website of Keeping Up found on the E! Online site. The official E! Online Keeping Up website features photos, episode synopses, computer desktops able to be downloaded, and a number of other staples of online star and television show promotional items and activities. One of the online games/ activities you can play on E! Online’s Keeping Up website is the “Take the Tush Test” quiz game. Presented with two pictures side-by-side of two different celebritys’ backends, the user is asked to decide which of the two is Kim Kardashian’s. After being matched up against other stars such as Jessica Biel and Jennifer Lopez, the user finds out how many backends they “brilliantly branded” by choosing the “correct” tush. 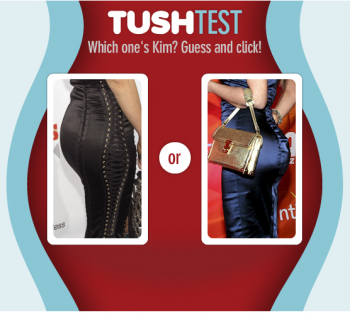 Throughout many of these instances of body-focused promotional items, Kim is constantly compared to another contemporary female star famous not only for her singing and acting career, but also for her derrière. I am talking about none other than Jennifer Lopez. Granted E! may not have initiated this connection between Jennifer Lopez and Kim Kardashian — for I understand that E! is participating in a much larger discourse influenced by many other media outlets, it is undeniable that E! promotes Kim Kardashian’s image by constantly drawing upon the abundant and, thus, familiar rump-centric discourse about Jennifer Lopez.2 Between featuring Lopez as one of Kim’s contenders in the “Tush Test”, the mentioning of their connection in Kim’s cast bio through the statement, “And with the hottest junk-in-the-trunk since J.Lo,…”, and Chelsea Handler, the host of E!’s late-night program Chelsea Lately, immediately talking to Kim about her butt and its comparison to Lopez’s when Kim made an appearance on her show, it’s apparent that E! is not only in the business of generating rump-centric discourse and putting Kim and her assets in the leading role(s), but also draw upon familiar strategies of fetishizing the ethnic, female other through audience flattery. In these instances of comparison, it is important to take into consideration the different ramifications and connotations this rump-centric discourse has between a Latina, second-generation Puerto Rican star and a multiracial Armenian and Irish-German star (her father is the late Robert Kardashian, one of O.J. Simpson’s attorneys). While further investigation and comparison is needed to make strong conclusions between the stardoms of Jennifer Lopez and Kim Kardashian, I find this association between the rump of Kim and the rump of J.Lo to be working as a way to pan-ethnicize and contain the peculiarity of Kim’s racial and ethnic identity.

While the instances of Kim’s rump commentary are plentiful (I have only presented a select set of examples produced by E!), I want to conclude by discussing the implications of this discourse surrounding the body of a mixed-race, off-white female. While conclusions can immediately be drawn by dismissing these instances of fetishizing the Other as only an effort to contain its potential threat, I want to open up the potential for Kim Kardashian and her curves to be working as an active agent in pushing the status quo of white-centric beauty dominating the United States media landscape.3 However, I do not want to present too optimistic of a view, for it is undeniable that Kim’s Hottentot-inspired imagery does present a problematic representation of a non-white female unquestionably under the scrutiny of the white and male gaze. Furthermore, her complex form of stardom as a socialite turned sex-tape star turned reality television star struggling to articulate her role in the Hollywood limelight further complicates her agency. Nonetheless, as a multiracial woman who is only gaining in popularity with United States media, Kim Kardashian’s and her body’s infiltration into the mainstream media and discourse of beauty ideals should not be taken lightly. Further exploration into the continuing formation of her stardom and career in tandem with investigating the reception of her persona will further reveal the complexities and the politics of her (and her rump’s) representation.

1. The cover of Keeping Up with the Kardashians Season One DVD set
2. Kim at the Ashley Paige photo shoot
3. Kim posing for Playboy
4. E! Online’s Kim Kardashian Tush Test