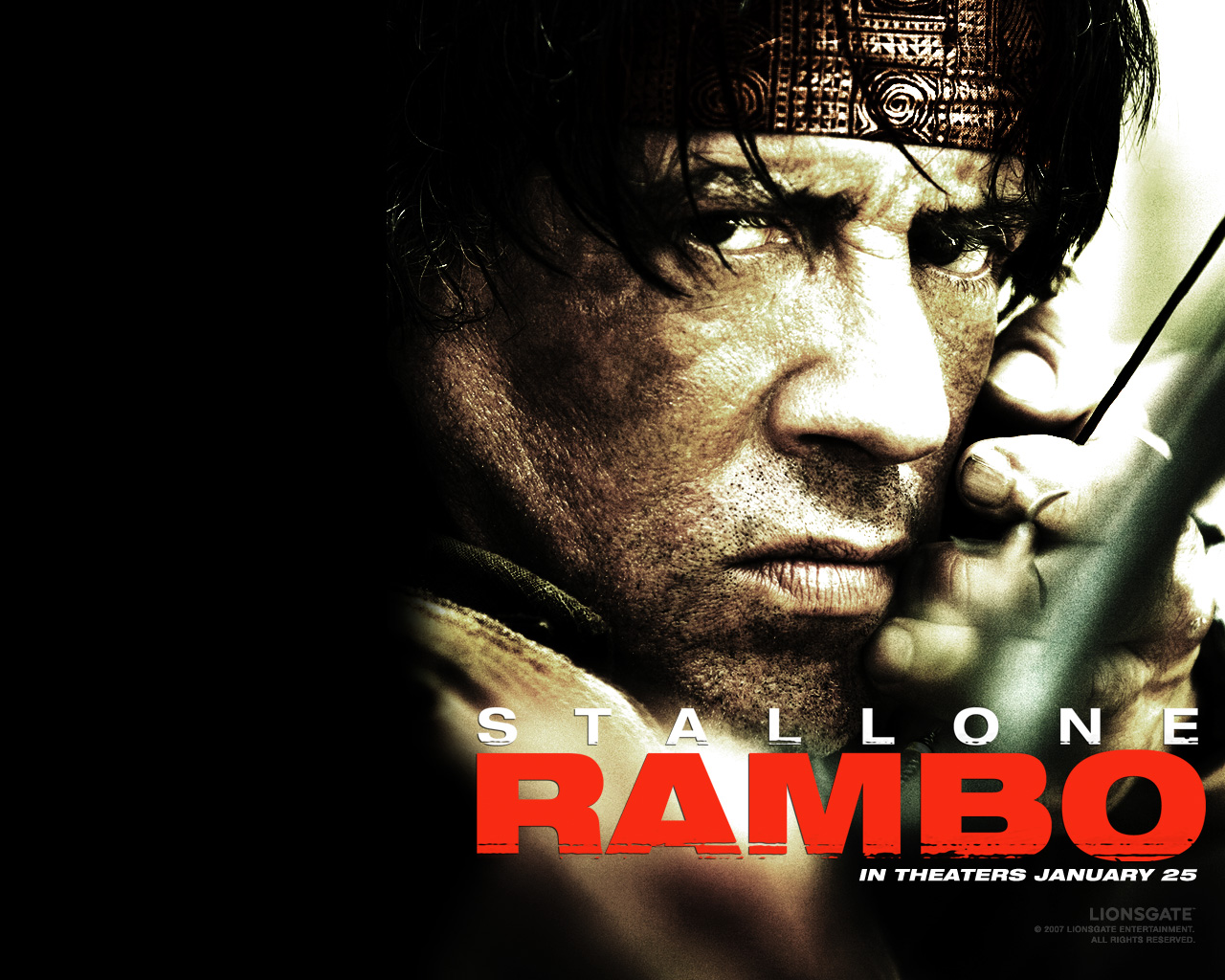 This past spring, in a fit of adolescent nostalgia, I went and saw the new Rambo (2008). As a child of the eighties, I had seen and enjoyed the first three films in the franchise. True, my enjoyment at twelve was probably more visceral than political. But after leaving the theater in a stunned state of sensory overload, I went home and looked up some of the reviews to see if the paid critics had been affected by the same things I had. Unsurprisingly, the reviews tended to concentrate on the age and body condition of star/director Sylvester Stallone, the specific content of the film’s violent images, and the global-political relationship between the film and its object of representation, i.e. Burma/Myanmar. While these responses tended to be toned down from the high hysterics or blind endorsements of the franchise’s Reagan-era reception, they weren’t very helpful in illuminating what I found to be disconcerting about Rambo.1

Leaving aside the content of the images—which are incredibly bloody—what struck me about Rambo was that its visual style bordered on incomprehensibility. To clarify: while many of the film’s images are comprehensible as cognitive objects, in the case of the hyper-kinetic action scenes, the film becomes a kind of visual stream of fleetingly identifiable individual images. However, the total effect of these sequences is visual incoherence, since some images pass by too quickly to be cognized. In a completely unscientific poll of my theater-going companions, this observation was confirmed insofar as each of us reacted to a different set of images during the action sequences.

Although critics and theorists of the “metric” school of film studies (i.e. David Bordwell) have been at pains to assert that the “average shot length” of Hollywood films has been relatively stable both before and after the “classical” period, this argument ignores the incredibly rapid-fire nature of sequences—as opposed to whole films—coming from Hollywood, of which The Wild Bunch (1969) is usually cited as the originary counter-example. But the rhythm of the editing isn’t the whole issue with Rambo. As they did in 1920s Russia, audiences have adjusted to variances in cutting speed according to the dominant style—hence, the “MTV generation.” Rambo’s action sequences are cut quite rapidly, perhaps as rapidly as the faux-subliminal imagery that Gus Van Sant inserted into his version of the Psycho (1998) shower scene or the figurative drug imagery from Darren Aronofsky’s Requiem for a Dream (2000). But, to reiterate an ancient division in film studies—as personified by the conflict between Sergei Eisenstein and Andre Bazin—what’s truly unusual about Rambo is not what happens between the cuts, but what takes place in the span of a single shot.

Although it would be necessary to make a more detailed study of the specific cameras and post-production techniques used in Rambo in order to verify my own speculative observations, my preliminary hypothesis is that the relative incomprehensibility of the shots themselves is related to the film’s use of digital cameras. More specifically, I believe that the digital camera’s pixelated recreation of the light reflected from an object and the particularities of the camera’s focus lend themselves to what Gilles Deleuze called a “movement-image” that is decidedly “post-human.” 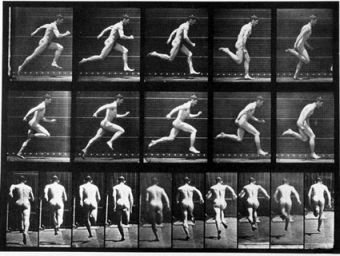 By “post-human,” I should perhaps be more specific: what interests me about the action sequences in Rambo is that they seem to exceed the ocular/cognitive capabilities of the human eye/brain. Although it can be argued that all mechanically reproduced images are in some sense autonomous from human capabilities, or at the very least that the technological/embodied aspect of the relationship belies the “naturalness” of any given mechanical image, the history of still and motion photography between the late 19th century and the end of the 20th century has been basically deferential to human capabilities. From Eadweard Muybridge’s studies of motion and Walter Benjamin’s discussion of cinema’s effects on perception to even thoroughly abstract films like Tony Conrad’s The Flicker,2 photographic media can be understood as having been utilized to extend the human eye’s capabilities, but never really to exceed them.

With Rambo (and I’d also cite certain sequences in the work of director Danny Boyle, particularly in 28 Days Later (2002)) this self-imposed limitation no longer seems to hold true. Within those films, certain shots exhibit a highly focused foreground image—usually a human character in motion—against a heavily “distorted” background. I say “distorted” here because, since digital photography does not inscribe light on a celluloid surface, it simply reproduces, as accurately as its resolution allows, the image as the machine “perceives” it. The “distortion” effect is basically the reverse of more traditional analog image recordings; in those, the foreground figure would fall prey to “motion blur” even as the background remained stable. But “distortion” and “motion blur” are only approximations based on the use of human perception as the reference point. The blurred background/hyper-focused foreground of Rambo is no more or less “real” than the prized “deep focus” of Andre Bazin and his beloved Citizen Kane (1941).

To a staunch humanist, this development might be alarming. But from a Deleuzean viewpoint, the existence of non-anthropocentric perspectives is hardly a cause for alarm; it is merely the state of affairs in a world of images abstracted from the human eye. In fact, a divorce from the primacy of the “gaze” (male or otherwise) can be construed as a fundamentally new form of filmmaking, especially in the Hollywood context. If the rapid-fire editing and non-anthropocentric shot content effectively “wash” over the viewer, the effect is an aesthetic experience that is radically subjective (remember the varied responses of my fellow theater-goers) and therefore politically subversive, regardless of the fact that the violent imagery is supposed to represent war-torn Burma and whose narrative structure is (at best) politically ambiguous. 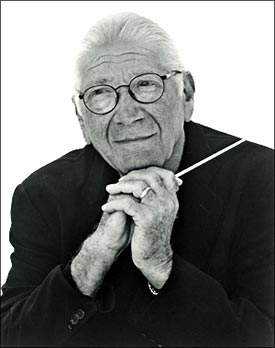 But in Hollywood, it’s almost never enough to leave a subversive form alone. The audience’s radically subjective relationship to the formal qualities of the imagery in Rambo are filtered through a secondary cinematic device. This was perhaps necessary, from an ideological/political perspective. What I’m speaking of here is the appropriation of composer Jerry Goldsmith’s themes from the previous three “Rambo” films as a disciplinary device for the film’s anarchically subjective visual form. If rapid-fire editing and visual distortion within the shot’s frame are the norm for the action sequences, it seems that the filmmakers decided that such ambiguities could not be left to stand on their own; hence, a kind of “heroic,” Wagnerian leitmotif accompanies each of these scenes of violent action. The visual content and its concurrent form may wash over the viewer, leaving them to construct whatever meaning they wish, but the score grounds the visual interpretation in normative categories of meaning. Namely, within the chaos of combat, John Rambo is “good” and however overwhelmingly subjective the visual effects are, the audience always has recourse to a pre-set interpretation in the form of the musical score.

This is, of course, not a new phenomenon. Deleuze himself noted that for every dissolution of social bonds that capitalism accomplished, it was necessary to re-inscribe and older, more conservative ideology in order to continue reproducing the means of production.3 Mommy, Daddy, Sally, and Johnny may be little more than divisible marketing demographics at one level, but in order for the marketing to work, it is also necessary to reinforce the symbolic primacy of the (unified) nuclear family, regardless of how fragmented it has become under the pressure of the market. In the realm of cinema, the question remains whether we watch a film like Rambo as its creators intended, or with the sound off, or not at all.