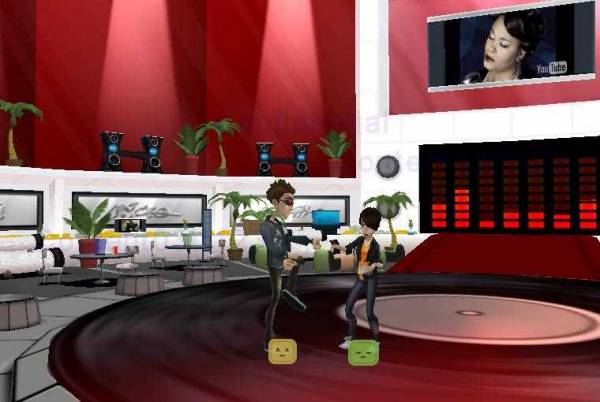 Avatars chat in Google Lively as YouTube videos stream in the background.

For months, the blogosphere was buzzing with rumors that Google was designing a virtual world. Speculation ran rampant among metaverse developers. Some suggested that Google would create a world even more powerful than Second Life. Others predicted the technology giant would join IBM, Sun Microsystems, and Linden Lab in their efforts to improve security, usability, and stability of the Second Life grid.

Hopes that Google would take the industry to the next level were dashed when the company’s new virtual space was unveiled earlier this month. Dubbed Lively, Google’s platform is a browser-based three dimensional chat room that has more in common with IMVU and Habbo Hotel than with Second Life. Lively users can select one of ten preset avatars, they can decorate their personal spaces with pre-created furniture, and they can choose from a limited range of avatar animations. However, the new environment does not permit users to create three dimensional objects, it lacks a scripting language, and there is no in-world economy. Google says it might eventually open things up, but Lively content is currently limited to items created by “a small number of trusted testers, vendors and creative agencies.”

To virtual world users accustomed to the creative freedom found in Second Life, the narrowness of Google’s platform was an enormous letdown. The decision to limit content creation, however, should not have been a surprise. Ever since Second Life first began grabbing headlines in Business Week, Fortune and The Economist, entrepreneurs have attempted to leverage the power of virtual worlds for marketing and internal corporate communication. Yet, enthusiasm for Second Life’s potential has been dampened by concerns about copyright violations and “obscene” content. Lively is just one of many virtual environments that dodge copyright and obscenity concerns by removing content creation tools from the hands of users.

Indeed, with a handful of laudable exceptions such as Metaplace, the current wave of virtual environments is all about shifting control away from users and back into the hands of technologists and advertisers. Consider the Web Flock platform that Electric Sheep Company launched a few days after Google Lively. For approximately $100,000 per year, the digital agency promises a customized, stand-alone virtual environment that will “improve monetization capabilities” through deployment of “brand-owned user experiences.” Web Flock eliminates the potential risks of user-generated content, and it further sweetens the deal by giving publishers complete access to user registration data. 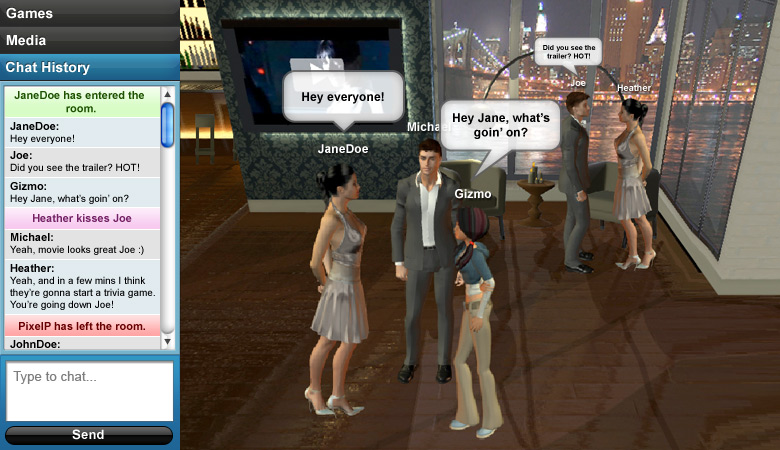 WebFlock’sdeveloper, Electric Sheep Company, notes that a one-year basic implementation “is available for under $100,000.”

From the standpoint of many virtual world entrepreneurs, this strategy makes perfect sense. Advertisers and other corporate users have legitimate concerns, and locked-down worlds are one possible solution. Sanitized virtual environments make it easier for advertisers to protect their brands. It is also easier to sell these “walled gardens” as insurance policies to corporations looking for conferencing and collaboration tools that can protect proprietary information. As an added bonus, because so many functions have been stripped out, these platforms are much easier to use. 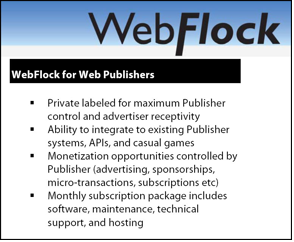 According to the promotional brochure for WebFlock, the product is “private labeled for maximum publisher control and advertiser receptivity.” See: http://www.electricsheepcompany.com/webflock.

At this critical juncture in the maturation of the virtual world industry, we need to remember that there are less Draconian ways of addressing the concerns of brand managers and other corporate users. Working closely with Linden Lab, IBM has demonstrated that it’s possible to host sections of the Second Life grid behind a corporate firewall. The firewall solution improves security and allows tighter control, but it preserves connections to the broader grid and retains Second Life’s creative tools. Philosphically, the approach is similar to the firewall solution used by institutions around the world who want to maintain a secure internal Intranet while also allowing some connections to the broader Internet via their employees’ web browsers.

Many analysts believe that firewalled connections to a broader virtual world grid is vastly preferable to locked down platforms that reduce the virtual world medium to a three-dimensional chat room that supports streaming video. This firewall strategy retains two essential dimensions of the virtual world medium: (a) the potential for users to create original, sometimes brilliant, content and (b) the shared connections that make it possible to describe these digital spaces as “worlds” in the first place.

From the very beginning, the personal computer industry has been fueled by the desire to empower users, and it is disheartening when virtual world entrepreneurs overlook this bedrock principle. For example, in a recent interview with Virtual Worlds News, the CEO of a leading digital agency dismissed concerns about the lack of user-generated content in Google Lively. “I think you’re going to see a lot of blowback at first from people that don’t matter. The Second Life cognoscenti,” he said. “They’ll be pissed because they can’t build stuff and blah, blah, blah.”

One has to wonder who these people are that “don’t matter.”

Are they the psychology researchers who use Second Life to simulate the experience of schizophrenia? Are they the architecture students who can now design their own immersive creations with pixels instead of gluing together pieces of balsam wood? What about the math instructor who devotes several weekends to building an open-source tool that demonstrates the visual beauty of calculus by translating mathematical equations into compelling 3D sculptures?

Are these the people who “don’t matter?”

What about the international cadre of volunteers who make sure that the Second Life Library on Info Island is staffed around the clock with reference librarians? Or the global teenagers who combine their creative energies to organize symposia and create multimedia presentations about transnational political issues? Or the stay-at-home parents who work a second shift in the middle of the night as well-regarded builders, avatar designers, and texture artists? Or the virtual nightclub owners who regularly organize in-world musical performances? Or the musicians who have found a global audience by performing in these nightclubs?

These people matter. They are the individuals who create and generate excitement in the real world and the virtual world. They matter. 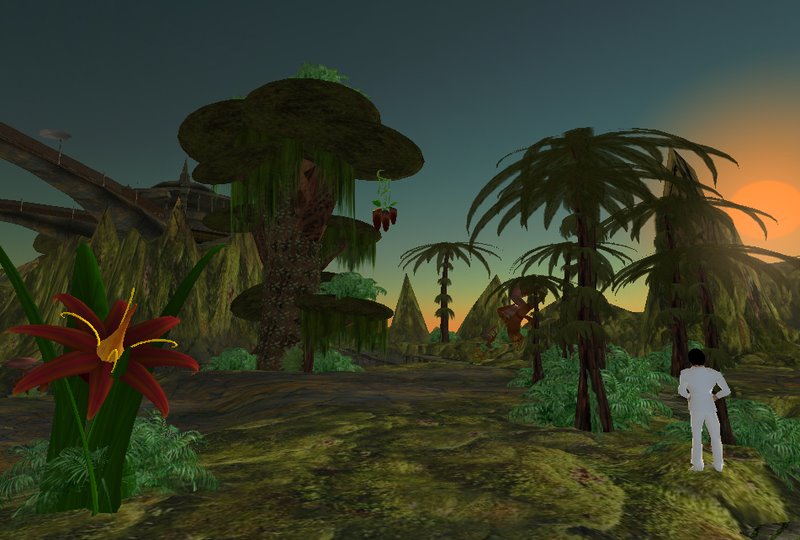 The Svarga island is scripted to behave as a fully functioning ecosystem. Rain clouds, bees, pollen, and flowers are just a few of the variables that interact with one another. This was created by a Second Life resident named Laukosargas Svarog.

User-generated content is only part of the story. It is also important to safeguard elements that make virtual environments feel like actual worlds. A truly “world-like” virtual environment brings together a diverse range of users and, in so doing, opens up possibilities for serendipitous interaction between individuals who are very different. For example, among Second Life’s active users, one might theoretically encounter musicians, entrepreneurs, anthropomorphic animals, fantasy role-players, Hare Krishna practitioners, Evangelical Christians, left-wing activists, members of France’s right-wing National Front, patriarchal cults, matriarchal cults, transnational corporations, and government agencies ranging from the Center for Disease Control and NASA to the State Department and NOAA.

The world-like nature of virtual environments is enhanced by the existence of common strands that connect people across geographical and cultural boundaries. In game spaces like World of Warcraft, these world-building strands emerge from such factors as:

In social virtual worlds like Second Life these world-building strands emerge from:

Despite holding widely different orientations in the “real world,” people who spend a significant amount of time in these environments really do share a common connection to other residents of their virtual community. Newcomers are often surprised by how deeply meaningful these bonds can become.

Some readers might be tempted to dismiss this column as a sectarian ode to Second Life, but this would be a misreading of my central argument. After all, Second Life’s flaws have been widely documented. For the time being, by incubating and aiding a broadly diverse range of people, viewpoints, and user-created content, Second Life hints at much better things to come.

Google Lively and Web Flock are not virtual worlds, but they are sure to find an audience. They will be popular with people who are looking for a three-dimensional chat room that can be accessed within a web browser, and many users will be perfectly satisfied with their limited content creation capabilities. These platforms might even serve as gateway spaces that inspire newcomers to move on to deeper and more open-ended virtual worlds.

However, even when packaged with Web 2.0 buzzwords, these locked down platforms are a disturbing reminder of the days when the big three networks delivered “brand-owned” experiences by locking down the content available on our radios and television sets.

Virtual worlds can, and should, be much more.

Image Credits:
1. Avatars chat in Google Lively as YouTube videos stream in the background.
2. WebFlock’sdeveloper, Electric Sheep Company, notes that a one-year basic implementation “is available for under $100,000.”
3. According to the promotional brochure for WebFlock, the product is “private labeled for maximum publisher control and advertiser receptivity.”
4. The Svarga island is scripted to behave as a fully functioning ecosystem. Rain clouds, bees, pollen, and flowers are just a few of the variables that interact with one another. This was created by a Second Life resident named Laukosargas Svarog.