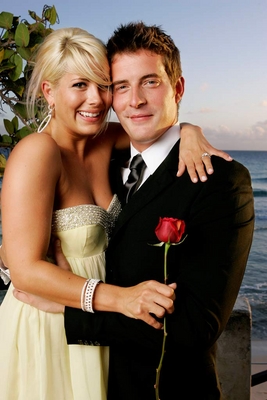 I write about quality TV, yet what I really love to watch is reality TV. My reality shows organize my existence; I could live without any one of them but I can’t live without massive doses of some of them. That’s why Bravo is my favorite channel—just when I begin to mourn the finish of Project Runway, Top Chef comes back on. And just when I thought that Flipping Out had to be the best non-competition reality show ever, they outdid themselves with The Real Housewives of New York. And yet–although I have never been one to use “vulgarity” as anything but a praise-word, I have to confess that there is one reality show I’m embarrassed to admit I love to watch—The Bachelor. ( I also love The Bachelorette, I’m telling you I’m indiscriminate). Not because it’s the most vulgar, quite the contrary, I’m proud to be a viewer of Hell’s Kitchen or Breaking Bonaducci—shows whose white trash bad taste make them almost fashionable. But The Bachelor is mainstream, well-produced, “tasteful” network programming, not the least bit avant-garde. Its contestants are buff, good-looking young men and women in not very mentally challenging occupations—all the boys are in some kind of sales and all the girls are event planners (an occupation whose existence I only know about from watching reality TV). Once they had a woman doctor on the show and she was totally humiliated because she wasn’t as buff or bland as the other girls—she actually believed the physician bachelor should want someone in his own profession instead of a personal fitness trainer. Well, they set her straight before the first date! 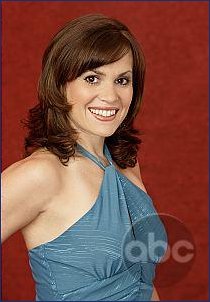 From The Bachelor, I have learned that “amazing” is an adjective that works for almost any noun one might need to use. I have learned that all those years I spent developing my vocabulary were a waste of time—I should’ve been cultivating the ability to attempt sporting activities but failing to be truly excellent at them. I should’ve learned to say “I think I’m falling in love with you” and how to graciously accept a rose. If I ever doubted the value of being average, The Bachelor has corrected this misconception.

So you see this is my problem—I find The Bachelor to be morally and socially reprehensible, but I can’t stop watching it. I just can’t seem to delete that season pass on my TIVO. Even though it makes me cringe, I am addicted to it.

I am now going to attempt to specify what this Bachelor spectatorship means. First, I want to say what I think it isn’t. It isn’t sado-masochism or the carnivalesque and it isn’t camp spectatorship either. All of these represent forms of pleasure/displeasure but none of them quite captures my own pleasure/displeasure in viewing The Bachelor. The carnivalesque takes pleasure in the grotesque as a way of undermining the social order, but The Bachelor gives new meaning to the term “bourgeois”. If it ever had a counter-hegemonic moment, it must’ve been on one of the seasons I managed not to watch. Sado-masochism shares with Bachelor spectatorship a delight in others’ pain, but watching Deanna have her heart broken doesn’t arouse me sexually. I couldn’t even muster a tear when, as they said on a recent Bachelorette, her previous bachelor “broke her heart and broke America’s heart too.” (An example of reality TV’s claim to speak for “America” as when contestants now say “America voted me off.”) Camp spectatorship comes the closest because it captures the identification/distancing dance involved. And writing about my experience of The Bachelor may sound campy but it really isn’t. Nowadays many reality shows express an intentional camp sensibility. Take for example a current show much influened by The Bachelor formula– Farmer Wants a Wife. Although you have a gaggle of city girls sitting around a farmhouse dissing each other and collectively dating the farmer, the show has none of The Bachelor’s romantic sincerity. Last week, for instance, the farmer eliminated one of the girls by having her cup of moonshine not runneth over. I don’t believe she “had her heart broken.”

The Bachelor plays it absolutely straight and I’m not even talking about its rampant heterosexism. In a narrative epoch where irony abounds nearly everywhere, The Bachelor is unable to muster up one iota of self-disparagement. Every bit of irony and every camp reading of the show has to be supplied by the viewer. The show cries out to be camped by sophisticated viewers, and I would imagine even naive ones couldn’t possibly take it as seriously as it does itself. I would like to claim a camp attitude towards The Bachelor in which every moment of identification would be countered by a gesture of distancing. I would like to claim to have snickered my way through every rose ceremony. But honestly I can’t. In fact, I identify with every moment of the show, and my identification is accompanied more by self-loathing than by irony. Camp implies an attitude of superiority toward one’s material and in writing about the show, I can certainly fake that. But as a spectator, I become totally immersed in a formula even a child could see right through. And I hate myself for it. Rather than feel superior, I want to say to myself “you are watching the most heinous exercise in gender stereotyping and public humiliation since ….well, ever.” The formula with its group dating, rose ceremonies and simpering enacted romantic rendezvous shames even the semi-verbal idiots who agree to participate in it. But it is effective, and it makes me think that psycho-analytic criticism needs to be applied to TV in an entirely different way than it was applied to film: a psychoanalysis of the spectator needs to replace one of the text. We need to account for the spectatorship of shame.