Spectrum, auctions, airwaves and frequencies: What we can’t see and why we need to
Barbara Crow / York University

Spectrum, auctions, airwaves and frequencies: What we can’t see and why we need to 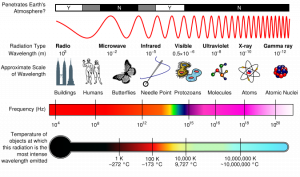 I delayed writing my third column on mobile television in the United States, as the national landscape is quite different from the one I live in and study. I was originally compelled to write about the relevance of mobile television in a U.S. context and not in a Canadian one. However, a recent spectrum auction generated fodder for this column.1

Spectrum: What is it and why is it important?
Spectrum refers to the transmission and regulation of airwaves into frequencies.

EM Spectrum Properties:
These frequencies are allocated in bands referring to services on an exclusive or shared basis (ITU 2004). There are also extensive regulations regarding service category (i.e., fixed service, mobile service) and service type (which describes types of transmissions and emissions). While spectrum, like the air we breathe, seems to exist in unlimited quantities, it is important that we understand spectrum, or these radio-wave frequencies, as a finite resource. (It is too difficult to represent on-line how this ephemeral space is allocated, but for those who are interested, a powerful representation of how little of this space is public and/or allocated for “free” use can be viewed in the U.S. Frequency Allocation Chart available from the National Telecommunications and Information Administration.)

Most nations have a governing body with administering policies related to telecommunications (in the United States, it is the Federal Communications Commission (FCC)). Internationally, two institutional bodies have played significant roles in shaping spectrum, the International Telecommunications Union (ITU) and the Institute of Electrical and Electronics Engineers (IEEE). The ITU, in particular, has been critical in setting out standards and policy recommendations on how to allocate spectrum.

The main objective of the ITU is to establish frequency allocations and regulatory procedures for the harmonious operation of global radio communication services and to ensure that these services do not interfere with competing signals and transmissions. Briefly, the politics of the distribution of this resource involves:

. . . first, the allocation of these blocks of frequencies for particular users (e.g., broadcasters, military, mobile operators, etc.) and second, the assignment of specific frequencies within the allocated blocks to different ‘licensees’. Generally, licensees have the exclusive right to use the assigned frequencies to provide designated services. Typically, spectrum users are granted temporary licenses, even though renewal is often a formality (ITU 2006).

There are two primary methods of purchasing these frequencies through auctions and ‘beauty contests,’ a term which reveals the highly gendered assumptions embedded in this technical universe. Auctions tend to be the most popular way nations sell spectrum allocation, and beauty contests are determined by which individual, organization, or industry can demonstrate their capacity to best utilize it. Critics of the spectral auction raise concerns about governments generating revenue from licensing and the enormous capital required to bid for spectrum allocations. Those concerned with the beauty contest format worry whether government regulators have sufficient training to determine who has the best technical and business models (Xavier 2001).

These auctions and beauty contests are highly profitable events. In 2001, when the last set of auctions for 3G licenses in Europe were held, they raised over $1.5 billion dollars. Cost for the spectrum ranged from 20 Euros per capita in Switzerland to 650 Euros per capita in the United Kingdom (Klemperer 2004).

Important to understand, particularly for counter-public groups with limited financial resources, is that there are two forms of spectrum. The largest part of spectrum, while licensed and regulated, is primarily limited to corporate control and harnessed for profit because it is so expensive. There is a small proportion of spectrum that is unlicensed, free, and available for public use. It is this portion of the spectrum that is primarily available to wireless technology activists and not-for-profit and community-based organizations.2 The unlicensed spectrum was first guaranteed by the IEEE, another international body key to the development of the wireless world of communication.3

Why is this relevant for mobile TV?
A discussion of spectrum is particularly relevant, given the mandatory FCC digital tuner regulation:

. . . specifies that as of March 1, 2007, all new TVs must include digital tuners. This rule prohibits the manufacture, import, or interstate shipment of any device containing an analog tuner, unless it also contains a digital tuner. Despite this prohibition on manufacture and shipment, retailers may continue to sell analog-only devices from existing inventory. As a result, at the point of sale, many consumers may not be aware that this equipment will not be able to receive over-the-air-television signals after February 17, 2009.

By February 17, 2009 television broadcasting will only be delivered in digital format. The FCC will provide boxes for those with analog sets to convert digital television program delivery. They have been introducing “coupons,” as well as monitoring producers and sellers, to ensure proper notification to consumers of what is required to make your current television compatible and the status of new television sets and their compliance with digital conversion.

While the benefits of digital television have been espoused by the telecommunications industry in the United States, there has been little intervention beyond education workshops to prepare consumers for this transition. Most of the focus on the transition is on how to get consumers “digital” ready instead of the more long-term implications of the corporate benefits of this transition. The digital delivery of television is happening in licensed spectrum. The high costs of the spectrum and the proprietary software of the mobile phone industry will continue the telecommunications industries control of what and how we access, use, and watch digital television on mobile phones.

Spectrum matters and we need to learn more about how it works and where we can intervene. Its ephemeral qualities, its magical and mythical representations, and its promise to emancipate make it difficult for us to understand and make demands of its ever-expanding commodification.