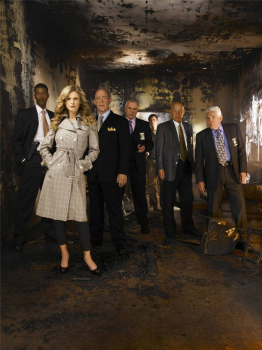 The Closer is both familiar and satisfying.

I might be anomalous these days, but I generally enjoy network television. Lately, however, I have found myself enjoying cable programming more and more. Not premium programming (I don’t subscribe to the channels), not even F/X in its attempts to be HBO Lite, but rather the original shows offered by basic cable stations such as USA or TNT. I especially look forward to these outlets’ summer programming, when they roll out the new seasons of their network originals. Programs like Monk, Psych, The Closer, and Burn Notice offer what one might call a low stakes television experience – familiarly generic, character centered, and relishing in formulaic consistency. Such programs serve as a welcome antidote to the increasingly frenzied nature of broadcast network programming, in which it often seems that “jumping the shark” has moved from the margins to center of their television practices.

Take this year’s May sweeps period. As broadcast network audiences resisted returning after the writers strike ended, the networks sought ways to woo them back. One mid-May Monday in particular, left a trail of devastation that struck at the very core of the casts and key character relationships of a trio of popular programs; the young, still fresh Bones, the aging – yet still engaging House (both on FOX), and the increasingly ridiculous CSI: Miami (CBS). (Yes, I know, I have no taste in TV – I’ll leave Lost and Six Feet Under to the TV snobs celebrating the apogee of narrative complexity.)

As indicated in their promotions, Bones and House were already in high stakes territory as each series offered the second episode of their two part finales. First up was Bones, which began by addressing the “shocking” end of the previous episode, the shooting of hero Agent Seeley Booth. After a trick beginning that secured Booth’s continued presence, the finale featured an in-lab explosion, and the revelation that one of the principle characters was in fact aiding and abetting the cannibalistic serial killer who had stalked the stunted season. Next up was House, a show that has spent the season finagling with its cast in order to refresh its own formula. The finale offered some classic “jump the shark” moments: House endures a number of medical procedures that no mortal could withstand to figure out what is wrong with recurring character, Amber, the live in girlfriend of his best friend, Wilson. In the end Amber dies in a manner that hints at irrevocably damaging the relationship between House and Wilson.

Then there was CSI Miami, where increasingly ridiculous white man hero Horatio Caine ends up lying shot on a tarmac, reproducing the who shot J.R. formula. Network television has become increasingly like this, piling on the plot twists, bodies, and formula shake ups to heighten the dramatic stakes to make sure viewers don’t miss an episode. The whole enterprise, however, ends up being somewhat exhausting. I do not mean simply mean the exhaustion of the genre or formula, but dare I posit, viewer exhaustion.

That is why I enjoy summer programming on basic cable – here life moves slower. The basic cable programs feature shorter seasons and appear at precisely the time of the year when the networks aren’t so anxiously trying to lure viewers. This allows a lower stakes kind of story telling to unfold. TNT and USA, especially, excel at the production of easy-going formulaic programming tied to their branding strategies.

USA, with its tagline “Characters Welcome,” airs original programming that follows a fairly simple recipe. Take a “quirky” character involved in some aspect of crime fighting, add a helpful sidekick, a dysfunctional family, and some sort of “agency” that the main character is at odds with. Place in a cocktail shaker and you come up with Monk, Psych, Burn Notice, and more recently, In Plain Sight. Crime allows for the episodes to focus on solving the mysteries, which on USA are rarely high stakes, while the relationships feature just enough dramatic tension and consistency to keep viewers coming back. Even the promotional spots for the programs downplay any potential seriousness or drama. These are not broadcast network promotions warning you that you miss the programs at your own risk, but straightforward reminders of the program’s return to air or a brief, often humorous preview of an upcoming episode.

TNT, the “We know drama,” outlet takes itself a bit more seriously, but only a bit. The emphasis is still on a “quirky” character fighting crime, dysfunctional family and work relationships, but these programs amp up the level of seriousness and feature big name female stars, such as Kyra Sedgewick in The Closer and Holly Hunter in Saving Grace. Yet, the dramatic overtones and conceits such as the angel who regularly visits Hunter’s Grace, can’t hide the fact that at the end of the day, these are fairly straightforward mystery, crime fighting dramas. I hope they stay that way, and never feature the episode “that changes everything.”

There is something oddly comforting about these programs. Freed from the need to garner broadcast network size audience or motivate people to pony up extra money for a premium channel subscription, re-run enough so that the first airing need not gain the attention of all the potential viewers, and aired on the fringes of the broadcast network season, this is programming that does not require high stakes in terms of either dramatic, sexual, violent, political, social, or even comedic content.

They do not invite the kind of sustained critical and fan scrutiny such as series like Lost, The Wire, or the departed Sopranos. There will be no big screen version (or, at least there should not be) such as the recent Sex and the City movie. There are no high stakes. With their shortened seasons and scheduling there are no worries that the networks will decide to “refresh” the formula by “shaking things up.” These programs practically verge on providing the kind of experiences delivered by classic network television – offering comforting character consistency, enough of a continuing dramatic “tension” to keep the viewer turning in each week, but without beating anyone over the head with an overload of “drama” that screams in desperation ‘watch me, watch me’. These are quietly capable shows; interesting without being exhausting, predictable without being boring, engaging without being flashy, snarky without being mean, and ultimately entertaining. And you will find me this summer, chilled cocktail in hand, relaxing with any one of these programs.