Are weight-loss programs the new pornography?

Recently, television has experienced a rapid proliferation of reality shows focused on weight loss and/or bodily transformation, as exemplified by NBC’s The Biggest Loser. The shows’ promise to their participants seems to be that through cutthroat competition and national exhibitionism, they will lose weight, win prizes, gain status–and in the case of celebrities, make it off the “D-list”–and live happily ever after. But what do these shows promise to the viewer? What pleasure do we get from the shameless display of televisual obese or ugly bodies? Why do I like to secretly watch others publicly confess their dissatisfaction with their bodies? 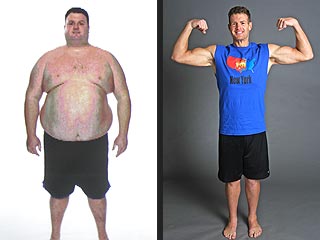 “Before” and “After” for Erik Chopin, season three winner on The Biggest Loser

To extend this somewhat attenuated analogy of the spectatorial pleasure of porn and weight-loss shows, consider the weigh-in to be the equivalent of the “money shot.” This moment on The Biggest Loser et al. consists of contestants stepping up onto scales akin to those used for weighing cows, and submitting themselves to being weighed on national television while wearing only a sports bra or tank top and cycling shorts. As the numbers spin and dip and leap around—200 pounds, 300 pounds, even 400–the contestant and audience watch and wait in suspense for it to end, land, or climax: will it be higher than last week’s? Will it be lower, and if so, how much lower? The number flashes, and the contestant (usually) expresses satisfaction, the host chimes in, teammates hoot, and the audience at home lets out a simultaneous yelp. Visibility of the public weigh-in becomes proof of spectatorial pleasure. As with porn, watching the weigh-in is an essentially private pleasure. Viewing at home, the spectator is constructed as voyeur. The pleasure in watching the small-screen image comes from simultaneous vicarious identification—“that could be me”—and relief that it is not. This therefore accords the spectator power over the contestant’s masochistic display. What’s the shame in that?

Eve Kosofsky Sedgwick and Adam Frank have written provocatively about shame as an affect, taking as their starting point a reading of the work by American psychologist Silvan Tomkins. They write that for Tomkins, shame is a basic affect, that “the pulsations of cathexis around shame . . . are what enable or disenable” one’s “ability to be interested in the world.”2 Shame is the affect that most defines the space wherein a sense of self will develop. In Sedgwick and Frank’s formulation, “without positive affect, there can be no shame; only a scene that offers you enjoyment or engages your interest can make you blush. …[The shame affect] produces bodily knowledge…. Shame, as precarious hyper-reflexivity of the surface of the body can turn one inside out, or outside in.”3 If this is true, if in fact watching Celebrity Fit Club and The Biggest Loser makes me ashamed, and not just in the “I’m too smart/I know better” way but at a physiological, stomach-turning, torso-squirming inside-outness close-my-eyes-I can’t-believe-I’m-watching-this way, even when no one is watching me watch this and need never know, I must therefore also be experiencing a positive affect: this turns me on. 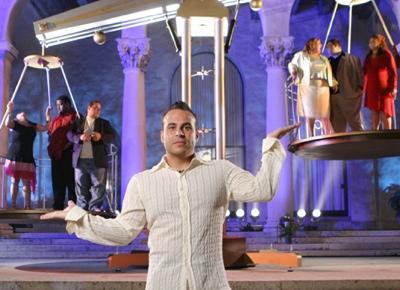 The cast of Celebrity Fit Club

It is tempting to watch these shows ironically, analytically, academically, for the ways that they reproduce economies of the visible, confirming the sight of the body as the site of the body being transformed and culturally written under late-capitalism. One can also view them as sites of intensive discursive and medicalized work, literally effacing people off the planet–the host often exclaims when a contestant has lost 150 or more pounds, “you’ve lost a whole person!” The televisual gaze is indeed punishing and surveilling self-selected Americans from every state who–according to The Biggest Loser’s application form–are “OUTGOING, CHARISMATIC AND CANDID individuals with PERSONALITY who have the WANT, DESIRE and COMPETITIVE EDGE to vie for this all expense paid chance of a lifetime.”

The application form is a fruitful text ripe for analysis. There is much to be made of this rhetoric, not the least of which is the national stake in representing overweight Americans in a way that rewrites them as extroverted competitors playing for prizes and money. Irony abounds in a show whose premise is that Americans are growing unhealthily fatter, the proffered solution to which is individual effort and self-display along with quality time from personal trainers. No mention is made of efforts in national health care, healthier food choices for lower-income populations, or promotion of exercise in a way that is not couched in the language of immorality, gluttony, or sloth. It is important to remember that The Biggest Loser is uniquely American. Unlike Big Brother and Celebrity Fit Club, for example, which began abroad and then emigrated to the U.S., The Biggest Loser is an American contribution, although according to its website it has now been packaged into an international television format.

The application form further constructs potential Biggest Loser participants in terms of performativity and shame. The paperwork asks would-be “contestants” (never referred to as “patients” or “dieters”) to answer questions such as “Have you ever acted, performed, or appeared on television or film?” and “What other reality/game tv shows have you applied to or been on?” The dieter is constituted here as performer, and his or her ability to lose weight as a performative identity. Further down, the form asks, “What do you think would be the best thing about being thin?” “What’s the hardest thing about being overweight?” “Describe your most embarrassing moment or experience?” One wonders what possible use the producers might have for the answers to these questions. I imagine the answers are similar to those voiced by the recently-thinner Americans featured each January in People magazine’s post-New Year’s issues designed to inspire weight loss. Would-be contestants likely confess to such shame-producing spectacles as “I couldn’t fit into a regulation-sized seat,” “I split the seams of my clothing,” or “I couldn’t chase after my child.” For our squirming viewing pleasure, we would be offered painful reenactments of such moments.

Ultimately, I find that I do not enjoy these shows, or the segments of these shows that focus so heavily on the shame of the contestants. The wonders of DVR allow the viewer to fast forward not only through commercials, but through the boring personal tales; stultifying televised sequences of other people exercising, bickering, being chastised by or chastising others; and the temptation sequences. Usually, I fast-forward right to the money shot: the weigh-in. This is all I really care about: the thrill is in seeing the “before” body imaged next to the weekly more-slender “after.” 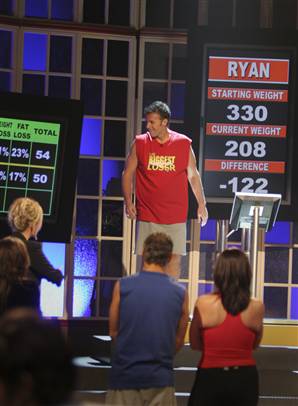 The climax of another episode of The Biggest Loser

While I lack statistics to back this up, many people–mostly women–weigh themselves every day, sometimes more than once. At the Y where I exercise, women stand on the scales in such a way that no one else can see their verdict. There is a scale in the coed weight room but I mostly see men use it; when women do, they often slide the weight away before they leave so the next person doesn’t see their weight. These are people who stand naked or nearly so in front of strangers in the locker room. Why are they so secretive about their weight? This everyday protectiveness and covering up is part of the mechanism that makes the public weigh-in on national TV or in print magazines so provocative: the live “performers” are willing to do in public what is usually reserved for private spaces. Best of all, they let us watch. They publicly confess what we keep behind closed doors or under layers of clothing. They put their shame on display: at being fat, their exerted bodies wheeze and squeeze into spandex workout clothes meant for svelter shapes. Their exhibition becomes a cover for our own shame as viewers who, by participating in their humiliation, in turn abject ourselves.

Image Credits:
1. Screenshot provided by author
2. “Before” and “After” for Erik Chopin, season three winner on The Biggest Loser
3. The cast of Celebrity Fit Club
4. The climax of another episode of The Biggest Loser