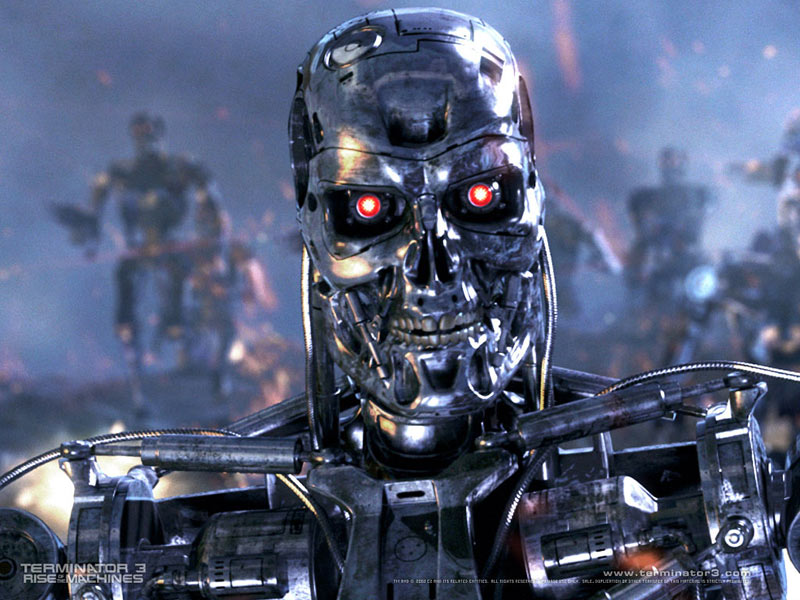 A terminator robot gears up to battle the FoxBot.

Setting: Super Bowl Sunday
Since this year’s Super Bowl was in my home state, Arizona, I refused to leave the house. My partner, however, was not going to be denied the pleasure of watching the game. Because we now tend to DVR (digital video record) almost all TV that we watch, it was a rare thing that we were actually watching the game as it was broadcast. Like at most Super Bowl parties, some people watched the game (my partner) and others watched the commercials. I only looked up from my laptop if I heard something interesting during the commercials.

I am a science fiction fan, and personally I was more interested in what was happening on the new television show Terminator: The Sarah Conner Chronicles than who was playing in the Super Bowl. I was happily surprised that I had the opportunity to get my Terminator fix during the Super Bowl intros where one of the unskinned Terminator androids battles the NFL FoxBot, a robot mascot adobpted by Fox to promote their NFL programming. Early during the football season I had commented on how I didn’t like the “toyness” of the NFL FoxBot, which so clearly resonated with the aesthetics of the Transformers robots from the summer before. I was so excited when the terminator android threw the NFL FoxBot around the screen that I cheered!

Terminator vs. the NFL FoxBot

Setting: Some weeknight at the end of February 2008
My partner and I finally got around to watching the DVRed two-hour television kick-off of a new Knight Rider series. Since I was actually taking a break and not working on the laptop at the same time, I controlled the remote during our viewing session. My partner started getting extremely agitated after the second time I stopped fast forwarding mid-commercial sequence in order to rewind and play one of the Ford commercials “starring” Justin Bruening and the Ford mustang who were both playing their characters from the movie’s narrative.

Mike and KITT, a love story. (You may want to fast forward through the first minute and a half to skip the regular ford commercial and the opening sequence for Knight Rider.)

Specific narratives branching out into a variety of modalities is nothing new; in fact, they do it in a number of ways.1 In the 1980s, George Lucas demonstrated the profitability of “continuing” the story across different media (films, books, action figures, video games, …); you see the Star Wars franchise everywhere now. For example, get in on the action in the Star Wars universe–to Las Vegas and play a slot machine.

Industries using narrative franchises to help advertise products is not new either. Product placement is big business in itself. Let’s admit it, McDonald’s’ marketing ploys aimed at small children are based on a child’s desire to continue a specific narrative’s storyline after eating his or her happy meal.

And in this instance, the narrative sprawl emerges from video games, not film or television.

Narrative franchises merging together in no longer new either.   When you are talking the third, fifth, eighth, and eleventh numbered film in a series, you’re talking guaranteed audience attendance!

All three of these methods of narrative franchise sprawl have a common goal: to help advertise the consumption of the narrative, some other product, or both. I think, however, with the Terminator vs. FoxBot and Night Rider Mustang spots we are seeing something a little different. Obviously in both cases the commercial spots attempt to promote either one or both products; however, these commercials spots also try to keep viewers from fast-forwarding through their DVRed material. These commercials do not have the “trapped” audiences of pre-DVR broadcast television or online streaming re-cast “television.” Instead, these commercial spots have to persuade the viewer that if you don’t watch the commercial, you might miss something.

The Super Bowl spots with the Terminator and the FoxBot are a simplistic form of this type of advertising. Beyond seeing which android will win, there is no narrative motivation to continue watching the spot. In other words, if I never saw those commercials, I would not miss anything from the larger narrative of the actual television series. On the other hand, the Mike and KITT Ford commercials do include material that is critical to the larger Night Rider narrative. In the commercial series we quickly find out that Mike will not be able to have a love life with anyone who does not know about, and tolerate, KITT. This is critical to the larger narrative since throughout the movie, there is tension between Mike and Sarah (Deanna Russo), his childhood friend and former girlfriend, who just happens to be the only person at the end of the film who can work on KITT’s artificial intelligence system. Sarah is a woman that Mike might be able to date because she does know KITT.

With an already well-developed industry for placing products into media narratives, will we now see an emergence of broadcast commercials that expand narrative franchises within the advertisement’s storyline? Will we see a growing number of ads that contain knowledge critical to understanding key components of the narrative franchise’s overall plot? Will we see more technological advancements that allow us to continue editing out non-narrative-dependent materials? Or, will it become all narrative, all the time?

1. The Terminator robot gears up to battle the FoxBot.