Snaring a Global Television Audience: The Case of Survivor

Like a contestant who survives multiple challenge rounds, Survivor thrives because it is well suited to the predatory culture of capitalism that dominates today’s global media industry. A critical political economic study of Survivor reveals that the show fits the needs of producers, networks, and advertisers while limiting television’s democratic potential.

Production of Survivor: The Medium is the Advertiser’s Message

Critical political economic theory argues that concentration of ownership enables the largest owners of America’s productive capital to disproportionately influence government policy. While the television industry has always been an oligopoly, the government’s retreat from media regulation has promoted concentration due to the logic of capital. Logic of capital theory contends that capitalists ceaselessly cultivate new markets, inevitably pursuing concentration of ownership because of their relentless drive for profit. Capitalists continually tap new territories and markets for profits while seeking ways to eliminate competition. Even though competition is a hallmark of a capitalist economy, the overriding tendency within capitalism is concentration.

The concentration of ownership that has accompanied the global expansion of the communications industry since the 1980s exemplifies this point. During recent decades, the maturation of cable and other communications technologies created competition in the U.S. and other countries that fragmented the mass broadcast television audience. Simultaneously, lax anti-trust regulation and the loosening of regulatory restrictions facilitated the television industry’s vertical and horizontal integration as the largest media conglomerates gobbled up competitors and consolidated their control over the U.S. media marketplace.

Production budget cuts simultaneously thinned out the field of independent production as Viacom, News Corporation, and General Electric incurred high levels of corporate debt through their respective purchases of CBS, Fox, and NBC. As the marketplace fragmented, there arose more potential networks for producers to sell programs to, but less money (or “deficit financing”) from networks to cover production costs. The repeal of the Financial-Syndication Rules in 1995 also enabled networks to produce their own shows, reducing their reliance on independent producers. Access to prime time television thus depends on an independent producer’s ability to secure enough production financing from advertisers to supply a network with low-cost programming that will nonetheless be of sufficient quality to garner high ratings.

Enter Darwinian producer Mark Burnett. In 1999, Burnett licensed the Survivor concept and created a U.S. version of the Swedish show Expedition: Robinson. Burnett required no deficit financing, yet offered CBS a program with high quality prime time production values. Instead of paying Burnett to license the show, CBS agreed to share the show’s advertising revenue with him if he pre-sold sponsorship of the program. By pre-selling the show, Burnett raised enough capital to produce Survivor, provided CBS with essentially free programming, and enjoyed a hefty share of the show’s advertising revenue. Survivor drew instant sponsorship because it attracted large numbers of people and the coveted teen demographic and boasted high quality production values. 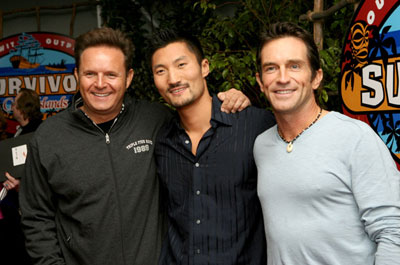 Access to a nationwide audience advances the networks’ goal of enclosing new markets in the United States by facilitating economies of scale in production that make television cost efficient for advertisers. The larger the audience a single television program attracts, the more cost efficiently and profitably a network can sell it to advertisers. Network television also remains the only place advertisers can reach large groups of people quickly.

The relaxation of the National Television Station Ownership Rule, the Cable Broadcast Cross-Ownership Rule, and the National Broadcast Cap during the late 1990s dramatically increased CBS’s audience, enabling the network to deliver a huge national viewer share to advertisers and promote synergies between cable and broadcast T.V. Although network television allows advertisers to target a nationwide audience, cable and the Internet target specific viewer demographics and deliver them to advertisers at a lower cost. Viacom’s cross-promotion of Survivor on CBS, its cable networks MTV and VH-1, and its Internet websites CBS.com and MTV Networks Online enabled CBS to snare a young audience during the show’s first episode and deliver it to advertisers along with a mass audience of 15.5 million. CBS’s use of the Internet also promoted interactivity by encouraging audiences to participate in Survivor’s story arc by using other media to follow the show. The ability to quickly capture a large audience during an era in which the network practice of ordering shows in small batches makes it imperative to transform a new show into a smash hit quickly.

Although more expensive than airing re-runs, Survivor also proved that original programming could curtail the defection of the network audience to cable during summertime, when the networks typically re-broadcast the previous season’s fare. During summer, 2000, Survivor ranked as the number two show of the year among adults ages 18 to 49, second only to E.R.

The global popularity of Survivor is partly attributable to CBS’s use of the economies of scale provided by the size of the U.S. television audience to license the program cheaply in developing countries. Local adaptations of reality television formats also satisfy quotas requiring a certain amount of locally produced programming. Europe’s largest suppliers of reality television have also made inroads into the global television market. Dutch reality television production giant Endemol maintains partnerships with broadcasters in 22 countries in Asia, Europe, Latin America and North America.

The adaptability of Survivor to local cultures and the convertibility of its format into a virtual infomercial for sponsors’ products underscore the role of the show in propagating consumption in the U.S. and other nations targeted by transnational capitalism. The strategy of licensing Survivor to overseas broadcasters springs from a network practice of striving to replicate a successful show by blatantly imitating it.

Financed by advertisers interested in cultivating new consumers abroad, Survivor reifies capitalism as an ideology and a way of life. The director of marketing for Sony’s AXN Action TV Network, on which Survivor airs in East Asia, cites the show’s focus on action and adventure as a catalyst for Asian youths’ fascination with four-wheel-drive vehicles.

Advertisers eagerly sponsor Survivor because it is a virtual commercial for their products. Rewarding winners of Survivor’s challenges with Doritos and Mountain Dew integrates the products into a circumstance that blurs programming and advertising by associating the snacks with adventure and heroism. The design of Survivor also affirms consumption as a way of life both by enabling its producers to develop lucrative licensing deals that extend its shelf life. There are now 150 Survivor-themed products available, ranging from CDs to bug spray, to board games, and bandanas. The organization of citizens into consumers thus grooms members of nation-states into behaving like a marketplace.

One of the longest running prime-time reality shows on network television, Survivor dominates the worldwide television landscape because it is well adapted to a global environment of media production. A political economic study of the show nonetheless reveals that economic determinism limits the possibilities of reality television’s potential for democratic communication.